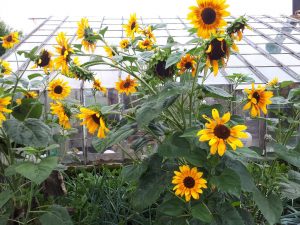 Sunday 1st. Brother Stephan helped out a departing guest who had tire trouble. 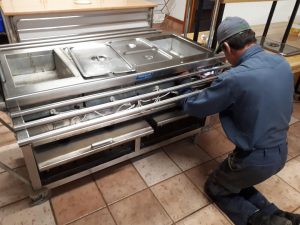 Monday 2nd. The translator of this chronicle projects a visit soon, and that will be nice. Brother Stephan fixed the fooderator food service unit in the refectory this morning, so that food will be kept hot all along it. Steve has also been decommissioning unused heating radiators, which involves cutting the metal.

Tuesday 3rd. Brother Glic has renewed the campaign against beaver activity at Brother Urban’s lake, about a half hour’s walk east of the monastery. The road which skirts the lake has a drainage tunnel under it at one point, and the beavers like to block it up, which threatens to wash out the road. Clearing it can involve climbing right down into the water. In Chapter this morning, Dom Innocent mused at the mixed success of the new no parking signs out front. Precision parking, at times daring, has a long tradition in Acadia.

Wednesday 4th. With the front lawn looking a bit more like a desert this year, the flower boxes have proven a fine addition. The beavers have proved difficult to daunt, so returns to the lake have been  necessary. Father Bede, who has visited the beaver lodge, seems to know an awful lot concerning their comings and goings: inside information, as it were. 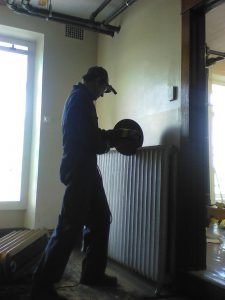 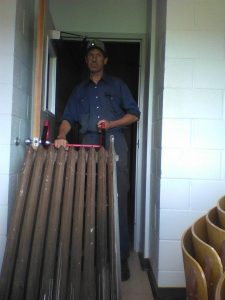 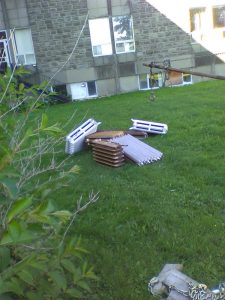 Thursday 5th. Using a tractor, Brother Stephan hauled sections of the old radiators up the north basement stairs and outdoors, this morning.  Also this morning, I noticed that Mass-goers had parked according to indications, on one side of the drive only, and it looks nice that way. It is no longer a question of squeezing through. 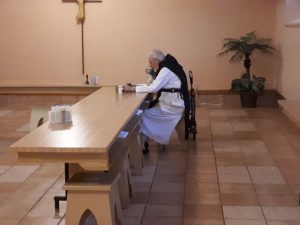 Saturday 7th. After lunch, Dom Innocent announced that a television crew would be here Monday to shoot some background footage, including community prayer, perhaps. I accompanied an old friend of the community to the cemetery today so he could pay his respects to old friends. Names, memories. Silence. A very big place, which on earth takes up only a little space.

Sunday 8th. The tail end of the recent hurricane was kinder to us than to other areas in the Maritimes. As winds and rain picked up last evening, the eagle sat motionless on his perch across the lake, facing into the wind. The rain and wind cooled things down near to zero overnight, and this afternoon folks were happily checking out the surging spillway at the grotto, in the sun.

Monday 9th. The bees were visiting different dandelions on the south lawn this afternoon. Our refectory book is entering into a striking, first-hand history of the 1920’s, day by day with the crew hoping to make the first flight around the world. The television crew scheduled to be filming here today rescheduled their visit for later in the week. 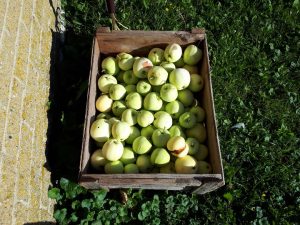 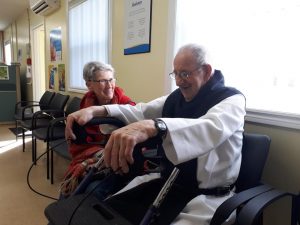 Br. Leo at the health centre.

Tuesday 10th. August apples from our orchard have been selling five dollars the bag. In Chapter this morning, Dom Innocent commented the Rule, then our discussion turned to the internet, and heating (notably as concerns the twin ventilation towers that run floor to floor, and the advisability of covering over the stack openings on the roof), and our Lariat truck. Brother Leo saw his family doctor today, and heard much positive as regards his recent tests.

Wednesday 11th. A guest we had not seen in years reappeared, a somewhat mysterious fellow. Some of us had come to think  he had perhaps passed on. When I saw him again for the first time, he saluted me and spoke my name with a distinctive mix of respect and mirth.

Thursday 12th. The security lighting at the front gate just reaches to the old barn, which gets faintly illuminated. Kind of nice, once you get used to it. ThyssenKrupp were by to look at the elevator today, and pointed out that the lights weren’t working well in the locked elevator control room, one of the more exclusive areas of the monastery.

Friday 13th. Using a tractor, Brother Stephan pulled up and apart yet another beaver dam, where the road out back dips down and turns. 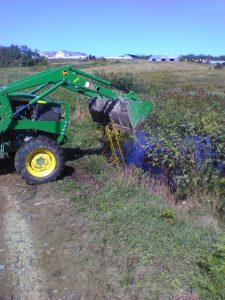 Saturday 14th. The central heating has not been turned on yet, so the monks use their little electric heaters as necessary in  room or office. To mark our patronal feast day tomorrow, Our Lady of Calvary, which cedes its place to Sunday this year, this evening’s hymn was a French version of Stabat Mater.

Sunday 15th. The Trappistines joined us for lunch, and their presence brightened up mid-September here. 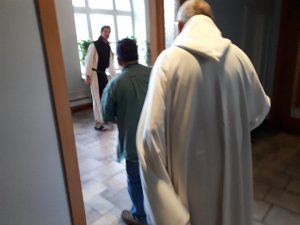 Somebody looking for Br. Stephan, Fr. Bede in the foreground back to camera.

Monday 16th.  Dom Innocent went to the Miramichi to take part in a community cable talk show, “Have a Chat”. As the hosts were chatting with him, footage was played that was taken here last week. We have yet to hear when and how the program will appear. A previous Rogers television program about the monastery is on sale at the door, and has been selling better in recent months.

Tuesday 17th.  Brother Stephan touched up the paint on the mechanical box for the front gate this week, it is gold. We received a nice thank-you card, for Sunday past, from the Trappistines, and even flowers. Quarterly council meeting was held this morning.

Wednesday 18th. Our guest book has signatures of recent visitors from different states and provinces. Some remember Brother Leo, a little too well in the sense he cannot keep track of all the people who know him. His case of shingles is lingering a bit. He says, without it he would be doing well.

Thursday 19th. Bede saw a specialist in the Miramichi, this lovely day. Brother Henry saw his dermatologist at the Georges Dumont Hospital today, taking in a bit of the life of the city in the process, crossing paths with many friendly faces. It is thought that his Parkinson’s may be what is affecting his skin, this remains to be confirmed. For now matters seem to be well in hand. 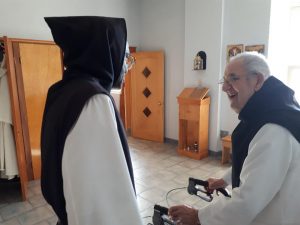 Friday 20th. Brother Leo has dreamt a dream of Oka, former location of the Val Notre Dame monks. In fact, he spent much time there, in dreams last night. He has never visited Oka, however; as a younger monk he thought death was close at hand, and did not bother going. Many of his dreams are beautiful.

Saturday 21st. This morning at Mass, a Mass goer provided fine music; guitar, vocals, even harmonica, with the organ and schola providing the usual music at other points of the Mass. It is interesting how music of one kind or another has a domino effect on the rest of the Mass and its prayers. The Ford Lariat truck got a tidy up to render it as beautiful as possible this morning, as this fine land vessel approaches the moment of its sale.

Sunday 22nd. At lunch, we listened to a CD of the compositions of the fellow who sang and played at Mass yesterday.

Monday 23rd. The floating Cross has been freshly anchored and moored for winter. It commemorates our friend Father Didier of Aiguebelle, who died boating on our lake. He remains close to our hearts. This morning before dawn, the statue of the Virgin Mary looked lovely out front, the Acadian flag was softly shaking in a rainy wind, the flowers and plants around the statue of Mary seem so high; they look nice.

Tuesday 24th. Brother Stephan got some good news. After a three-month process, his first invention, of a pipe organ door bell, has obtained patent status. The patent, and due royalties, go to us; production and promotion are tackled by companies hoping to succeed commercially with Steve’s idea. For months past, the invention has been a well-kept secret, the prototype graces our annex wall. In Chapter this morning we discussed our manner of treating the earth’s environment.

Wednesday 25th. Bede saw an orthopedist in the Miramichi today regarding his osteo-arthritis. His overall health affects what can and cannot be done to help him. The Ford Lariat is being brought out to the highway during the day, to show that it is for sale. This is bringing more inquiries than did the internet listing.

Thursday 26th. Brother Leo has slightly increased his activity. Father Bede is set to welcome a women’s group for an overnight stay, there will be no men allowed, briefly. 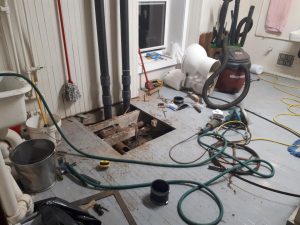 Friday 27th. The sun is a bit lower on the horizon as mid-day nears, an effect which lights up the ripples on the lake more amply, and signals somewhat drabber days ahead.

Saturday 28th. Work has been underway to prepare a room on the third floor for someone preparing to join us for a one month immersion in our life. Meanwhile, the classically styled common washroom in that corner has entered intensive carpentry care.

Sunday 29th. The Lariat sold, late in the week, and next week a new vehicle will arrive. A friend joined us for one month’s immersion in our life, and with him we pray.

Monday 30th. With the Lariat sold, now our big John Deere tractor with snowblower attachment has been parked at roadside for sale. Catches one’s attention, particularly if you are driving in. It is also listed online. This winter, we will try a new way of clearing snow. Our new car, replacing the Lariat, was not ready today at the dealer in Miramichi.