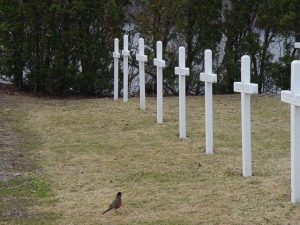 April 3, Father Marcel‑François Richard, parish priest of Rogersville, N.B., aware of the anticlerical movement in France, invites the Cistercian monks of the Abbey of Our Lady of Bonnecombe, in the diocese of Rodez and Vabres, Department of the Aveyron, in France, to establish a refuge for their community in his parish.

September 1, Father Richard deeds a large personal property to the monks. It includes dilapidated farms buildings, a small, decrepit house, a sawmill and a grist mill situated near Tunnel Siding, on the Intercolonial railway.

October 31, the monks arrive by train in Rogersville.

November 1, the feast of All Saints, they take formal possession of the land and celebrate the first Office and Mass in their temporary monastery dedicated to Our Lady of Calvary. 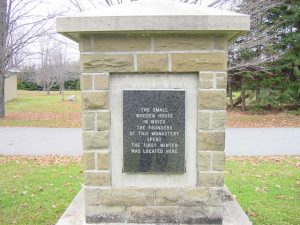 Site of the first house

May 9, with the approval of the Most Reverend Thomas E Barry, bishop of Chatham, the monastery is incorporated by an Act of the Legislative Assembly of New Brunswick under the name The Model Farm and Agricultural School of Rogersville, N.B.

Dom Émile draws up, on the spot, a rudimentary plan for a wooden chapel and a monastery, which are erected by the monks in a matter of a very short time.

November 1, on the first anniversary of their arrival, the monks move into their new monastery, built to accommodate fifty persons.

Msgr. Richard visits Bonnecombe, accompanied by Father Patrick Dixon, parish priest at Newcastle. He is received ceremoniously and gratefully as the founder and benefactor of the Rogersville refuge.

Pierre Comeau, from Petit‑Rocher, becomes the first Acadian novice. He is given the name of Brother Joseph (1865‑1943).

August 15, Dom Antoine Piana, directs the recently formed Rogersville brass band on the occasion of the inauguration of a shrine dedicated to Our Lady of the Assumption, erected by Msgr. Richard on the grounds of the church.

June 18, Msgr. Richard dies and is buried in the crypt of the chapel built as a monument to Our Lady of the Assumption. The shrine is, to this day, a favoured pilgrimage site.

The monastery is faced with the threat of closure by Bonnecombe. Dom Antoine Piana goes to France and staves off the menace.

September 18, the Cistercians' General Chapter decrees the holding of a special inquiry into the viability of the monastery.

September 14, the General Chapter orders a second extraordinary visit of the priory in order to take a final decision as to its future.

September, the General Chapter maintains the priory as a refuge of Bonnecombe and authorizes the building of a permanent monastery.

April 25, the reconstructed sawmill is destroyed by fire.

During the night of July 25‑26, a demented novice sets fire to the barns, the smithy, the bake

ry, the carpenter's workshop, and the apiary. 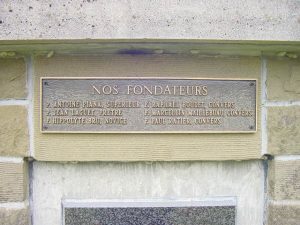 Major renovations to the dam are completed.

May 9, the old wooden monastery, converted into a potato warehouse, is destroyed by fire.

September 11, Dom Chérubin Lenssen is elected titular prior of Calvary and is installed by Dom Pacôme Gaboury, abbot of Oka.

The monks begin the commercial production of cement blocks. This industry will be maintained until 1972.

October 1, the 50th anniversary of the foundation is celebrated. Father Alphée‑J. Babineau, the parish priest of Rogersville, publishes a brief history, in French, of the monastery.

Dom Alphonse Arsenault writes and publishes a short history, in French, of the monastery, intended as a recruitment tool.

August 20, an intimate celebration marks the 60th anniversary of the foundation.

June 18, Dom Pacôme Gaboury, abbot of Our Lady of the Lake, at Oka, and an exceptional benefactor of both abbeys, in Rogersville, dies after more than 50 years as abbot of Oka.

March 5, the new guesthouse is blessed and inaugurated by Dom Fidèle Sauvageau, abbot of Oka.

September 8, the blessing of the Our Lady of Lourdes' grotto by Ardibishop Norbert Robichaud. It stands precisely where the first quarry and road bridge originally stood.

April 18, the monastery is reincorporated by an Act of the Legislative Assembly of New Brunswick.

During the night of May 1‑2, the former piggery, transformed into a henhouse, is destroyed by fire. 10,000 chicks perish.

In September, the community stops the manufacture of cement blocks; the gravel pits having run out. Commercial competition had also become a threat.

June 3, Mr. Léandre Goguen founds the Association of Friends of the Trappists. The Association takes special care of the grotto and surrounding grounds.

Modernization of the community refectory.

April 24, Dom Maurice Guimond is elected abbot and receives the abbatial. blessing from Archbishop Chiasson in the monastery's chapel, on May 8.

There are major renovations made to the chapel.

Reorganization of the sacristy, the chapter room, and the scriptorium.

Dom Maurice Guimond resigns on November 21 for health reasons.  On December 16 Dom Bede Stockill is elected the fourth abbot.  The new abbot was prior at Mount Saint Bernard Abbey in England and arrived on 19 December to be installed by Dom Jacques Pineault, Abbot of Mistassini and Father Immediate, on December 20th.

2003
Dom Bede Stockill received the abbatial blessing on March 25th, from Archbishop André Richard in the church of Our Lady of Fatima at Collette.  The community at this time counted nine members with stability in residence.  Dom Bede is the 8th Superior and the 4th Abbot.

2004 The Calvary Abbey website was launched.  A new arrangement of movable choir stalls was installed in the chapel as a way of adapting to smaller numbers.  Extensive repairs were made to the three-story chicken barn.  Fr. Graham Touchie was ordained, priest.

2005 The silos were demolished and silage bunkers built. 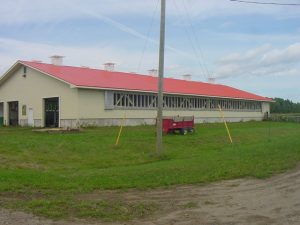 2010 Half of the monastery windows were renewed.

2011 The Lourdes Grotto was vandalized at Pentecost.

2012 The land at Shediac was sold. Fr. Roger Neck returned to the community.

2013 The milking herd was expanded and the milk quota nearly doubled.

2014 Geothermal heating was installed for the monastery. This also involved installing a more powerful system of standby generators for both dairy and poultry and the monastery itself.

2018 The farm closed its dairy operation.

2018 Dom Innocent Ugyeh was appointed superior ad nutum on 17 April. Dom Innocent is the ninth superior in the history of the monastery.

2020  September 18th, Our elaborate new septic system was completed.  We did not get the permit to continue operating the old one.