Thursday 1st. We’ve received a summer newsletter from the Dominican contemplative nuns in British Columbia, who started up in Canada in 1999.  They have the one thing we don’t: dogs, visible in the photos.

Friday 2nd. Plans are in the offing to convert poultry barn #3, currently unused, for use as a back-up heifer barn. With a tractor, Brother Stephan brought the new road sign (a pip) out front and placed it. All that remains is for the metal frame to be painted black. Steve also cut down some trees which would have obstructed the view driving southwards.

Saturday 3rd. The flags have arrived. New ones, six feet long, to replace flags wind-damaged. Dom Bede was hoping that we could fly a Vatican flag, to mark the canonisation of Mother Teresa in Rome tomorrow and now we can. The other replacement flag is an Acadian one.

Sunday 4th. Some new palls made their debut at Mass, covering the Chalices and Paten before the consecration. They are white, and the ones we had before certainly weren’t—any more: they were from the 1930’s. With joy, we thought of Mother Teresa’s day in Rome, and even watched some of the canonisation as we ate lunch, a power point projector giving us the internet image on the wall.

Monday 5th. Father Innocent offered Mass this morning in thanksgiving for Mother Teresa.  A feeling of thanksgiving for her seemed to dominate, yesterday, today. At roadside, Maurice Gallant set to work painting the metal frame of the new road sign. An additional stall was waiting in the scriptorium, ready to be slid into the chapel for a visiting monk: Brother William from Mount Saint Bernard in England, who will be dropping by for a week.

Tuesday 6th. Dom Bede and Brother William entered chapel together for Sext, a happy moment. Dom Bede showed William around this afternoon. With temperatures rising, amidst plenty of humidity, the country insects seemed a bit merrier today; they had been lingering near doors and lights.

Wednesday 7th. There is an earthy smell in Brother Léo’s office, because of the tomatoes from our garden now on sale there: two dollars a basket. Nice tomatoes. Brother William seems to be enjoying his stay, and is keeping an eye out for wildlife such as eagles. Today he and Dom Bede cycled into Rogersville. The road is being repaved presently, beginning at the entrance to the Sisters, ending at the pharmacy.

Thursday 8th. Brother William rowed about on our lake today. 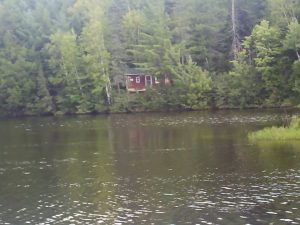 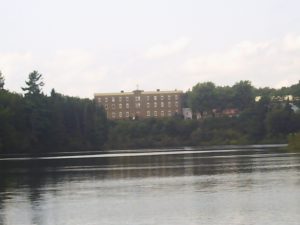 Friday 9th. Before visiting Miramichi later in the morning, Brother William sat in on chapter then told us a bit about his community, about New Melleray in the States where he has been visiting, even helping in the casket manufacture there, and about his own life. He has been a monk for fifteen years. As infirmarian he helped care for his own uncle, they were monks together.

Saturday 10th. A few water fowl were floating on the lake this morning. We don’t see the geese for much of the summer, then we do as their flight south approaches. Brother William ventured down a dirt road past trees today. Half-hoping to see a bear, he instead saw a group of young people hanging out on their ATV’s.

Sunday 11th. With Mass cancelled in town, the chapel here was full, with a couple of extra chairs brought in. At lunch we talked amongst ourselves and with Brother William, partly about his home town of Liverpool, England. He mentioned that Paul McCartney has put considerable money into an institute for the performing arts there, and that this has had an invigorating effect on the city. Conversation also touched on the monks at Mount Saint Bernard, and changes to the building over the years. Mount Saint Bernard is a listed building: something to be admired and saved, meaning you sometimes can’t put down new tiles.

Monday 12th. In Chapter this morning, the community tried to sort out what is happening to the phone system, so we can tell the system’s technicians. Some extensions seem to work perfectly. Others are doing strange things; the main line in particular, after Brother Léo picks up, now features the recorded message of a woman’s voice saying the call is not a go although it is…or would be without her.

Tuesday 13th.  Brother William of MSB got away early this morning from Moncton to Boston, via Toronto. Visits to the monasteries of Spencer and Wrentham await him. In preparation for the Open Farm Day on Sunday, Brother Stephan has designed a flyer the center of which has a little aerial map indicating barns, orchard, machine shop, and more besides. Also in preparation for the farm visit, we’ve received trinkets, yogurt, milk to give away. A lot of half-pints of chocolate milk: these in particular look tasty.

Wednesday 14th. A night watchman friend of ours is here for another retreat. He says that years into that job, it is still tiresome.

Thursday 15th. Our Patronal Feast day has arrived. It always goes by fast, and always speaks to us. We are blessed. Today our sisters even joined us for prayer and a last bit of summer sunshine. The Bar-B-Q went smooth as silk, more’s the credit to Simone and her assistant Léa. They were wearing cool shades, sparkly head bands: I thought I was in Los Angeles for a second. After the meal and great conversation, a few monks opted for a large-scale siesta.

Friday 16th. Léandre Goguen was by. Léandre was the person behind the creation of “l’Association des amis des Pères Trappistes” a group of friends who wanted to do something for us a few decades back, and focused on things like our grotto, which they made lovelier, and our guesthouse, the chair lift for which they raised funds for.

Saturday 17th. Our aspirant Peter offered to clean the outside of our dishwasher, and says this was quite a task. Looks almost new. It is a small, stainless steel washer. The monastery is a cleaner’s paradise in the sense that there would be plenty to do.

Sunday 18th. We had mild September weather for the Open Farm Day, which went well. As people entered they helped themselves to free apples and chomped on these as they roamed about. There were country people, older people, homesteaders, hip francophone couples, a few families. Some former farmers, and people trying to start a little farm of their own.

Monday 19th. Some hand-made signs to help visitors on Open Farm Day were taken down today. And the marquee which served for both Bar B Q and Farm Day went last night. There are just a few petals left on the lawn from a bouquet of sunflowers. Yesterday evening the French TV station aired a story about the farm visit. It gives an idea of how laid-back a lot of our visitors were. Peaceful. The CBC reporters themselves were pleasant, respectful.

Tuesday 20th. Reaction to the news story has been positive. Brother Henry rolled lucky sevens today: he turned 77. His luck began with the coincidence of another resident of the Dieppe care facility sharing Henry’s birthday: two birthday cakes instead of one.

Wednesday 21st. Dom Bede had to get a new laser jet printer. He bought this printer reconditioned by the manufacturer, and guaranteed.

Thursday 22nd. Today, Father Innocent brought a long ladder outside and set it against the greenhouse, whose little panes he is now securing to face another winter. The greenhouse is only a few steps from the backmost exit of the monastery.

Friday 23rd. The amplifier in the refectory has been fading in and out a bit, as we continue hearing read Paul Theroux’s traveller’s account of the southern U.S. He has recounted well-known racist incidents of the 20th century; awful. But in a way, the plain account of the racial divide which has remained quietly tucked away in the everyday, is the more painful to hear.

Saturday 24th. Father Clovis is thinking of having an apple U-Pick this year, instead of selling apples already picked. Apple signs to be placed at the road have been taken out of storage.

Sunday 25th. At Mass this morning, sunlight in the chapel through the vertical blinds was nice. Our chapel is simple. One unusual feature is wainscoting that is a little higher than Dom Bede’s head. This seemed nice, until a friend of the community mentioned that he thought it looked about as slick as ‘Mister Furley’, the character played by Don Knotts on the T.V. show ‘Three’s Company’. 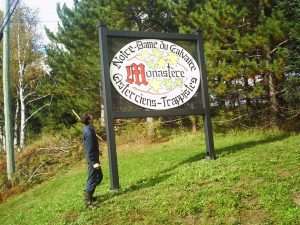 Monday 26th. Apple juice production got off to a smooth start. Father Clovis works hard and has good helpers for the final steps: someone to wash the apples, someone to prepare the apples to be pressed by Clovis; someone to put the pressed juice into plastic bottles saved from last year.

Tuesday 27th. Dom Yvon Moreau of Val Notre Dame gave us a copy of his new book, “Écouter Dieu”, a book on Lectio Divina. The card that accompanied it says Communion dans l’Esprit (Communion in the Spirit) on the front, with the image of a Cross encircled with light. On the back it says Dom Yvon found his inspiration for intercessory monastic prayer in Communion in the Spirit, and hopes for help from the same source in his task as Bishop. He became Bishop of Sainte-Anne-de-la-Pocatière in 2008.

Wednesday 28th. The internet was too weak for opening or sending e-mails today. The problem was with one of the towers down the highway a bit. This evening, the lake was covered with geese floating about, then a short while later, no geese in sight.

Thursday 29th. The juice spree over, it is time to wash the two heavy cheese cloths Clovis wraps mashed apple in before pressing. A new date has been added to the community calendar: “December 30, employee Christmas meal.”

Friday 30th. It was warm enough this evening to stroll about outside without extra clothes. In the distance: the faint beep of the dump truck’s backing up with a load of silage. This is the third cut. In the barn this afternoon, people were talking about beaver; you can cook and serve it, but must soak it first to get the smell out, then give it quite a cooking. “Do they eat fish?” someone asked, trying to understand this smell. “No, they eat wood, and that’s what you taste.” How appetising is that?