Photos show: A container acquired for storing scrap metal.  Farmers measuring the height of the corn. Geese on one of our fields.  Fall colours.

Saturday 1st. We have had some problems with our well. At times this week the water was a little murky. At other times, you could smell a bit of bleach. For a while, we switched to the well serving the chicken barns. It has an advanced purification system, all of the water passing under an ultraviolet light to eliminate bacteria.

Sunday 2nd. In the refectory today, we listened to Frank Sinatra, including songs like Downtown, and On a Clear Day You Can See Forever.

Monday 3rd. Our little red vacuum cleaner is out of service. 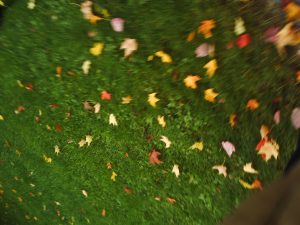 Tuesday 4th. By the time we got to the prayer intentions of Lauds this morning, only a glimmer of morning light shone outside. You couldn’t tell if the sky was clear or not. Once we’d left the chapel, each monk going about their business, Brother Glic setting up the altar for Mass: beautiful colors outside, still faint. A clear sky.

Wednesday 5th. The newly paved road to town is very smooth and black. It was so long overdue for repaving that, particularly since it is still awaiting marking, it seems like a dream. For some Rogersvilleois, particularly one disabled man who gets around in a motorised buggy, the end of paving has taken away a nice way to pass a good part of the day—watching them work.

Thursday 6th. Having bought and put into use the new French lectionaries, it is hard not to be impressed at the bookmaking that went into them. The French Sundays book is as spiffy as the English Sundays, but sturdier. As well, its print and layout are remarkably clear; even the paper and ribbon were well chosen. I wondered, looked at the back, and sure enough: made in Italy, by L.E.G.O. (Legatoria Editoriale Giovanni Olivotto).

Saturday 7th. David Babineau and Normand Gionet were by today. They are the force behind a project called, Raconte-moi Rogersville, which gathers facts and artifacts related to the village’s history. They were happy with the wealth of early twentieth century photos they found in our archives. In our newspaper reading room, they set up their computer and began copying images from the archives, which are behind a fireproof door across the hall. 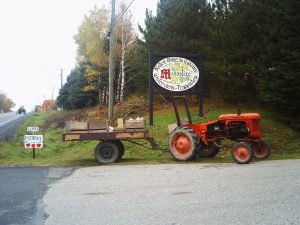 Sunday 8th. There have been apples for sale, apples being picked this week, even a manned sales stand at the road. U-pickers can read instructions on how to pluck an apple; turning it rather than pulling. There have been two monks’ birthdays this week: Steve’s and Graham’s. There have been several noteworthy guests. Today, a young family from Québec arrived for a return stay. They are some of the nicest people around; but the same could be said of so many of our guests. 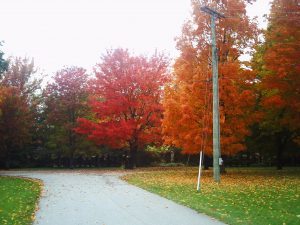 Monday 10th. Brother Stephan made his way to Utah by plane today. Family, and the monastery of Our Lady of the Trinity await him. Three hours difference from here.

Driving into the cloister today I had to slow down because a truck was parked opposite our two red doors. Two Native Canadians were outside the truck taking pictures, one with his camera poised on the ground. I asked if I could take their picture for them. “Oh no! We’re just doing art pictures” the lady said, smiling, so I drove on.

Tuesday 11th. The orchard having produced more than could have been hoped for, more apple juice production began today. Yesterday, some determined u-pickers who’d been at the trees walked through our backyard to the front entrance, their faces turned against the wind, each a plastic shopping bag full of apples in their hand.

Wednesday 12th. The juice crew consisted of mostly familiar faces from Mass. The joy of juicing seems to enhearten some people. Then there’s juice fever, when people simply get too into it, losing a bit of perspective on things. Our late Father Adrien was the first to be struck this way, but he reigned himself in admirably. Some of this year’s juicers seemed confident Adrien’s spirit would be directly present today, smoothing things out for them.

Thursday 13th. It can happen that the moment Stephan goes away for a few days, something goes wrong on the farm, necessitating long distance calls to him. This time, it was trouble with the milking system over the space of a few days, at one point rendering it impossible to milk cows with it at all. Pumps. Breaker. Seal. Transistor board. Three technicians helped out in turn, all quick to the scene. “It’s euchred”, one of them said of the seal around the bottom of the milk bowl. Euchred is an expression you don’t hear much anymore.

Friday 14th. Glic hit the milk house. Today, Brother Glic set about tidying up the milk house, where the pumps, tank, office are. Tuning up the vacuum pumps meant dismantling them and lots of spilled oil, so one technician had a barrel full of peat moss he spread on the floor so no one would slip.

Saturday 15th. Against a sky so obscure you can’t tell if it’s menacing or promising, the autumn leaves on the trees are like a light shining. After Vespers today all were present for silent prayer, including Steve, back to us as of a few hours. You sit where you want for this; only one monk stays in his stall. The bells go and we rise, remove our cowls, walk downstairs to the refectory.

Sunday 16th. His friends brought Brother Léo some Tim Horton’s donuts. The Tim Hortons he is most interested in is of course the heaven location. He mentioned today that talking to people about heaven rattles them sometimes. When he started talking to some Catholic visitors this week about heaven and its mysteries, they excused themselves and took off.

Monday 17th. There are some parish priests from away here on retreat. And our own annual retreat has begun, with Father Doris Laplante, Redemptorist, the priest in town. It is his first time giving a retreat in English instead of French. With aplomb, he is preaching on Mercy, especially through the Parables, but also stopping to reflect on his own pastoral and life experiences.

Tuesday 18th. For the retreat, we have Lauds twenty minutes later, 6:40 instead of 6:20. It is quieter then than ever. Father Doris Is joining us in the stalls for Lauds and Vespers, and saying Mass for us each day.

Wednesday 19th. Brother Glic, our only altar server, can be heard getting things ready a bit earlier in the day than usual, since morning conferences end a brief while before Mass.

Thursday 20th. Father Doris’ talks center on important basics of love and mercy, affording insights from someone outside our own religious family.

This week Father Roger was involved in clearing away some of the trees growing on the bank overlooking the lake. He says the path down the bank still exists, and though it has not been cleared in a long while, you could still walk down it to the water. I asked him if he saw the ghost of Brother Arthur while doing this work, and he answered that although he didn’t see him, Arthur might have been invisibly preventing accidents. Brother Arthur Beaudry was a monk of Spencer, also World War II veteran, who spent several years here, nearly always outdoors in the woods around the lake.

Friday 21st. This evening, in place of a conference, Father Doris conducted a non-sacramental penitential celebration in our Chapel. He preached, and also sang a hymn a capella about Jesus’ love for Saint Peter at all moments of his life. After this he joined us for a festive meal. We talked among other things about different places around the Province, Father Doris having cycled basically all of New Brunswick, his next project being a trial of the ‘fat bikes’ designed for use on snow, at Kouchibouguac this winter.

Saturday 22nd. It is mostly only golden leaves left on a lot of trees now, especially around the horizon. It has been raining a lot, it’s been mild. Breaking habit yesterday, the starlings broke into full song while it rained.

Sunday 23rd. As interested breakfast eaters tucked into more of Peter’s birthday cake from yesterday, Dom Bede prepared for his train journey tonight to Montréal, and from there to the monastery of Saint Benoît du Lac for the pastoral meeting of the Canadian Superiors.Monday 24th. Our friend John brought Henry to the monastery yesterday, then back to the residence. Before dawn today John was headed back here. He turned off the trans-canada highway to the Acadieville road, and two moose were standing there together – both in the opposing lane, happily. This afternoon, Léa our cleaning lady was humming a song to herself as she prepared room 113 for new guests. Our two suites are more in demand than they once were.

Tuesday 25th. First snow of the year this morning, in the form of slow-falling moist flakes. It made the person I was talking to run to the window, to see.

Wednesday 26th. Steve gave a Chapter talk this morning. He spoke of us his recent journey to Utah, and of encountering that place and culture for the first time. Among other differences from here was the elevation of the settlements, which can make a person feel more easily winded. Then there is the strong presence of Mormons, who welcomed Steve on his visit to Salt Lake Tabernacle, where he saw but didn’t hear the eleven thousand pipe organ. Brigham Young University was another stop.

Thursday 27th. Cook Simone made her own fly swatter today, by taping a piece of cardboard to a spatula.

In the monks’ fridge there is an array of home-made jams and jellies from our friends. A new bottle has arrived marked “crab apple jam: good with toast and cheese.”

Friday 28th. There are still, somehow, apples to sell from our tiny orchard. Father Innocent has had to go get more bags for them. After dark today, the employees continued storing the corn harvest, brought in one dump truck load at a time. In the distance at bedtime, you could see light from the big garage, its bay doors open.

Saturday 29th. Dom Bede is back, and Dom Clément our Father Immediate is also now here, and will take part with Bede in the regular visitation at our sisters next week. Clément has had a busy year, including trips to Nigeria, the United States and the United Kingdom. Bede brought us cheeses from Québec, including a smoked blue cheese. It has the look of a cheese that’s been through a lot to get where it is today but readers, it’s delicious.

Sunday 30th. A nurse in town is hoping Glic will be able to supply her with 100 apples from our orchard, to give to minor hockey players. Glic’s concern is that the apples, if we have them, be good ones.

Monday 31st. Dom Clément and Dom Bede spoke to us in Chapter, a nice moment. They gave news about the various monasteries in Canada. Morale is good, it sounds. Each monastery is experiencing its own challenges. At Mistassisini, production of chocolate items for sale at Easter has begun, with an extra shift also making chocolate at night. Val Notre Dame has been sending monks to food shows once in a while, in places like Paris, France, to promote their products. For his part, Saint Benoît du Lac’s Dom Laberge has been giving concerts in various places in North America as part of a campaign to get support for the monastery.