Sunday 1st.
At lunch, we listened to Offenbach, a composer who put Oomph into Oom-Pah-Pah. As soon as lunch was finished, John took Father Innocent to the Moncton airport to begin a long journey to visit his family in Nigeria. His journey will include a twelve-hour layover at London Heathrow. 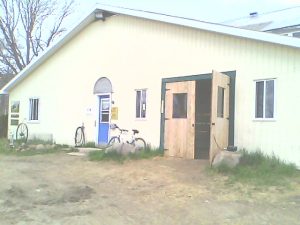 A nice new door on the barn

Monday 2nd.
With Father Innocent away, Brother Glic has taken on the task of keeping the stove lit in the greenhouse. In Chapter this morning, Bede mentioned that we’d soon try a new way of having reading at lunch: listening to material over the internet. He mentioned that around the world as communities become smaller, they abandon the practice of having a weekly reader (it means one more person for the dishes, for one thing) for simpler alternatives.

Tuesday 3rd.
We were set to listen to a BBC documentary on Dolly Parton’s charitable works at lunch, but the internet connection failed. After lunch, Father Graham drove Father Roger to the Moncton Airport. Roger’s mother is not well, so he has gone to Ontario for a few days. On the way back to Rogersville, the engine light in the Kia went on, which meant a stop at the dealer in Moncton. The problem: the emissions control canister.

Wednesday 4th.
Today at lunch we were able to hear how Dolly is Bringing Reading to Rotherham, England. (Pronounce that: ‘Rotherum’; Dolly did.) Children there, and in North America get books delivered to their door with a note from Dolly. Dolly says she loves to read herself, and is a child at heart.

Thursday 5th.
One of the heating units in the chapel is making a strange noise, not completely unlike the noise of a model airplane landing, only softer. It is likely the solenoid. It is only once in a while we hear this. Today Bede posted a message from Father Innocent, who is ably making his way home in Nigeria.

Friday 6th.
We heard from Father Roger, and his time with family seems to be going well. The Superior of the Canadian District of the Society of Saint Pius the Tenth dropped by informally this week while on the road. He was at None, but it would have been difficult to guess who he was. The SSPX has a Mission situated in nearby Miramichi. That was news to me.

Saturday 7th.
Only Brother Léo and Brother Glic were at Vigils this morning. All other parties were accounted for! 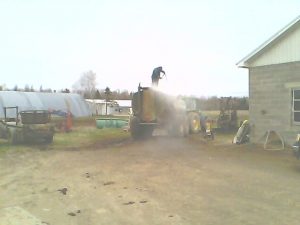 Sunday 8th.
At lunch we spoke of friends and neighbours, near and far, our friend Françoise in St. Pierre & Michelon for one; and elections; and the SSPX. Dom Bede can remember that group’s heyday in Paris (in the 1970’s?) when they even occupied a Catholic Church, in the name of true Catholicism, I guess. Brother Glic went to Moncton to get Father Roger at the airport. It was good to see him again.

Monday 9th.
Brother Glic has been making his way out to the greenhouse fairly regularly to start a fire. Heating goes not according to outside temperature, but on whether or not it is at least ten degrees in the greenhouse. We heard from our gardener Father Innocent recently: his time with his family in Nigeria is going well.

Tuesday 10th.
The trees seem barren with still no leaves. Soon, it will warm up. Rain, too, we hope.

Wednesday 11th.
Lucien has been replacing one of the handrails at the guest house entrance. There are two matching entrances there. A little lawn. Father Roger is hoping to pick up some shrubs to plant there, tomorrow.

Thursday 12th.
The milk tank overflows a bit some mornings after the milking, other mornings, no. Yesterday I lifted the lid and saw it was exactly full. The milk, perfectly chilled, smelled sweet. We used to serve raw milk in our refectory but none of the monks choose to drink this anymore, and nor are we allowed to sell it when people ask for some. Father Clovis has been trimming the apple trees, spraying them; I think he filled his canister with a paint to use where he had cut, and the smell from this wafted about inside. Earlier this week, Statistics Canada collected questionnaires on all our residents. Our questionnaire was the ‘Correctional or Custodial Facility’ form. Guess that was the closest match. 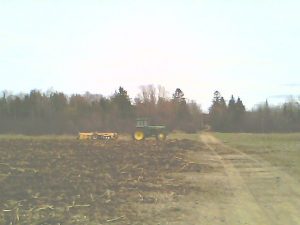 Friday 13th.
Father Alphonse Richard who is here on retreat found some fiddleheads growing on the property, collected them, the cook prepared them for lunch. After Mass this morning Dom Bede and Brother Glic fed an internet cable down to the refectory, so we will not have to rely on wireless. Third floor, second floor…unfortunately the cable our technician had supplied was not long enough, so off they went to Chatham for more. This gave Glic a chance to have a good look along the Miramichi river.

Saturday 14th.
Dom Bede showed a Catechetical group from the Miramichi around this afternoon. They were in the chapel for first Vespers of Pentecost, giving our prayers a little boost.

Monday 16th.
The little black flies are in full effect outside. The swallows who live in the barn are taking advantage of the free meal, zipping about and chirping. Inside the monastery, Father Graham did the pays with Father Roger this morning, so as to stay current. As that was ongoing, fellow chicken farmer Jacques Martin checked in to discuss farm matters with Father Roger. Our accounting office is in what used to serve as a monk’s room, or ‘cell’.

Tuesday 17th.
Dom Bede got out on his bicycle today, unperturbed by some brief sun-showers. Behind the guesthouse and monastery, white flags appear where Brother Stephan has had to bring in some fill. That is the area once dug up for the geo-thermal wells, and it is about to be seeded so as to restore the lawn. Fill is necessary partly because the soil turned up by digging was not soft enough to bear seed.

Wednesday 18th.
Lawn chairs have been brought out to the front of the guest house, for our guests to eventually use. Maurice Gallant is raking up leaves left over from last year.

Thursday 19th.
With grass seed, Maurice Gallant seeded the earth over Father Maurice’s tomb today. We were expecting the return of Father Innocent today. Then early in the day we learned that his flight had been cancelled and that he was still in Abuja, Nigeria waiting to fly later on, arriving in the wee hours of Friday morning.

Friday 20th.
John went to get Innocent, whom we thought had stayed overnight in Moncton. As it turned out, Innocent was not there. We were not certain where he was, but he was en route. Father Graham’s parents, who live in Moncton, arrived for their first visit since Christmas.

Saturday 21st.
Workers arrived and the farm team began planting the corn this morning. Rémi said they were starting with the field that was the most wet, not far from the monastery. Father Roger was outside today watering stuff. In the afternoon, Father Innocent was seen once again. He seems to have made the best both of his time home and of an arduous set of journeys.

Sunday 22nd.
During Eucharistic Adoration this evening, deep snoring could be heard, uninterrupted by us singing the Tantum Ergo, etcetera. Some wondered who it was; some guests supposed it might even be Father Roger, who happened to be reclining a bit to pray. Actually, a family Father Clovis knows had visited, and two children were sleeping either side of Father Clovis.

Monday 23rd.  The big red doors to the chapel have been swung open. A hook holds them in place. Inside the chapel there is a wooden screen door; a bit of air. And light. Just below the big doors is the red basement door; this has been taken off and replaced with a screen door for the summer.

Tuesday 24th. Having Father Innocent back has added some oomph to our singing. He has been catching up on his planting and other activities after his return from Nigeria. Unfortunately, traveling, he caught a cold.

Wednesday 25th. A guest arrived for his first retreat here. Another guest who has been visiting regularly for decades prepared to depart. This evening Father Clovis said it would be a good night to sleep on the roof. I guess he meant, because of the heat today. However, once night fell a thunder storm hit and hit hard, so it might not have been the best of sleeps on the roof. Towards 10:30 the power went out, and then surged back on. Our new generator had kicked in for the first time.

Thursday 26th. The generator remained on well into the morning. Some technicians came in to convince it that the trouble was over.

Friday 27th. We have begun eating fresh produce: welcome greens, and even strawberries from our greenhouse. This evening during the meditation after Vespers, the train could be heard, not very far away. It is a pleasing sound.

Saturday 28th. The renovations to the bread room are nearly complete, just a new sink to put in, basically. The new tiles in this tiny room look nice.

Sunday 29th. The washing machine in the milk house has broken down, so we are using the machine in the annex to the monastery instead. Each time a cow is to be milked, freshly laundered cloths are used to help clean the udder. Steve is going to buy a new washing machine soon. In front of the milk house we have a little flower patch this year. Someone has also painted the wagon wheel that is there, next to the flowers. Sort of a 1960’s look. There is also a decorative boulder there: originally it had a happy face painted on it. It has faded but if you look, you can still see the smile.

Monday 30th. A busy week on the farm, as corn planting continues. We learned today of the death of Osélie Daigle. She was the daughter of frère Humbert and the sister of Frère Gérard of our monastery. She was 107. People remember her father-monk for his humility, her brother-monk for his troubles. Osélie herself was spirited and kind.

Tuesday 31st. In our apple orchard, almost all the trees are in blossom. In Dieppe today, Dom Bede appeared over Brother Henry’s skype connection, from the fixed camera in the chapel. We saw him walk to the front of the chapel, after which he disappeared off-screen. He was getting the chapel window opposite the main celebrant’s place open, and duct taping the edges of the collapsible screen.