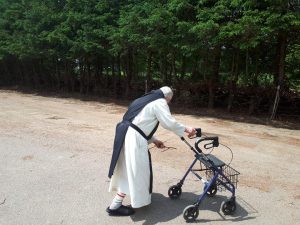 Monday 1st. Overcast morning twilight is now highlighted by security lighting out front; the trees look splendid. I thought the racoons would shy away from this light but they seem to enjoy extended hours of grazing. On the side of the monastery, the new lighting is just above eye-level, giving a Hogan’s Heroes-esque feel to a step outside.

Tuesday 2nd. Brother Henry went in for foot care today, in Moncton, and for once the foot experts were expert. Brother Stephan has cleaned up the parking lot under the row of trees which was trimmed dramatically recently. The smell of cut wood is lovely, but the real test in the monastery is, how will the old guys react.

Wednesday 3rd. A Priest retreatant recently went out for a walk and decided to cut some of our rhubarb for us. He was nice. As another Priest retreatant settled in for a stay, rhubarb crisp was served him with zeal by our Simone.

Thursday 4th. An evangelical Christian has been by for a few days’ retreat. It is always striking to have someone like him here with us as we pray the Psalms for example: often mysterious, often edifying, you wonder for starters how well we know ourselves as Catholics, and how open are we.

Friday 5th. Our Lariat wonder-truck went in for some work on the tires and exhaust system, at the friendly garage just heading out of town. We got rain, but not the type of rain the land needs. It has heated up considerably, yet Bede manages three miles by bike of an afternoon.

Saturday 6th. More truck troubles were discerned for the Lariat. Keep on truckin’, as we said in the 70’s. The guesthouse has entered a period of zero guests, most noticeable when we are praying the hours. Does the alternance between receiving people and greater solitude make us better hosts, the moment arrived? Hard to say.

Sunday 7th. Some air conditioners went in to select guesthouse rooms this week, not sure to what degree they have been tried out yet. 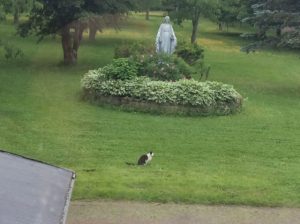 Monday 8th. Maurice our cook stepped into our sweet-smelling  greenhouse this morning to look for fresh ingredients for us. Dom Innocent visited the lakeside hermitage. Brother Stephan set into whipper snipping  some of the many corners of the lawn.

Tuesday 9th. Dom Innocent is putting together a new list of the monks’ present tasks and community positions. Brother Leo has nearly finished reading a tome by Garrrigou-Lagrange which would have put off fainter hearts.

Wednesday 10th. Bede is making headway in the production of the new Gradual book for Mass, including all that we sing at Mass. For this he finds binders, page holders and whatever other material he needs, sold as office supplies. In this case, the binder will be a small one. This evening, a family was down at the grotto and out of view one could hear children’s happy exclamations, as over the lake the eagle flew and we heard eagles’ cry.

Thursday 11th. Today was the feast of Saint Benedict, one of two monastic summer solemnities for us. Each July offers a new chance to understand Saint Benedict; and the day’s offices built around his legacy in a simple enough manner give a sense of what could be our  home.

Friday 12th. Our Sisters’ new monastery is being put together fairly quickly. Unlike some construction projects, this one has not drawn many onlookers. They will certainly be in before the snow flies.

Saturday 13th. To help fill in the yard to the north of the monastery (where a cloister would have existed, had a separate Church building been built here) Steve transplanted a little green ash tree from down the hill. At one point in the past, a former monk developed a strong interest in arboriculture, and brought in types of trees that were new for us, hence the green ash.

Sunday 14th. At Mass Offertory, Steve played some Ennio Morricone, from the film score of ‘the Mission.’ 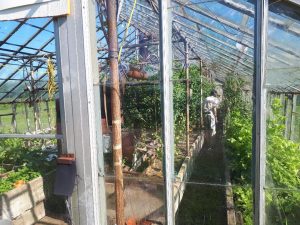 Monday 15th. Our Father Immediate, Dom Clément arrived for our regular visitation. The biannual nature of the event can help a person reflect on life all around. Given the rarity of monastic visitors here, having someone like Clément by at all can bring a certain re-focusing, and joy.

Tuesday 16th. Very early this morning, there was a low mist on the lake. Swallows were flying about as high as they can, at least as high as one ever sees them fly. The 2019 visitation having been declared open at a morning meeting, we each met with Clément to update him and share with him anything we choose to. Also during the week, Clément got into Moncton in order to include Brother Henry in things.

Wednesday 17th.  Dom Clément gave us a run-down of his experience of the recent central commission meetings in Citêaux, where the agenda for the Order’s 2020 General Chapter was set.

Thursday 18th. In front of the guesthouse, Brother Glic has painted yellow lines to indicate parking spaces. Our mail lady chatted a bit as she dropped off the day’s mail. This evening, we had a festive meal with Clément, and talked during the meal, a very nice one. Then on to the dishes, ending with a few moments to spare before the Office of Compline, and sleepy-by.

Friday 19th. We gathered at 10 this morning in the chapter room. Dom Clément read to us the visitation card he had prepared, then signed it, and the visitation was closed. He really acts as a brother to us while he is here. By mid-morning he had begun the long journey back to Mistassini, taking with him some of our greenhouse tomatoes. He said the monks there are tomato fans. The afternoon was quiet; quiet in a new way, the visitation having ended.

Saturday 20th. More guests from Quebec arrived for a brief retreat. A guest from Prince Edward Island took his leave, leaving us a nice thank-you card. Father Bede got out for a ride on his bicycle this morning.

Sunday 21st. It is warm and overcast, the air didn’t clear last night, the look and feel are a bit reminiscent of smog in a big city. As our cemetery is undergoing reorganisation of crosses, the lawn there is un-mowed and kind of lovely with purple clover and white clover. Brother Henry used to tell people ‘it is the happiest cemetery in the world.’ Not unaware of the humor his remark provoked, or opposed to it, this seemed to be his way of promoting the life; in other words, suggesting there is no better way to live and die.

Monday 22nd. Brother Steve is experimenting with singing the Psalm and Alleluia at Mass from the organ when he has to, rather than going up to the ambo. This started off well.

Tuesday 23rd. Maurice our chef was in early to make bread. Brother Leo made it up to the Miramichi to see a doctor. His doctor there, the son of a missionary, grew up in the most serious of missionary milieus. Sometimes I wonder if there is a joy of missionaries in particular because he seems to have it, others too whom I’ve known. A steadiness; a getting beyond the surface. This evening a chicken farming family was by for a bit, also someone from Gibsons BC, where ‘the Beachcombers’ was filmed.

Wednesday 24th. Bede and Steve got in to Moncton today and were able to visit Brother Henry. New flower boxes here and there on the monastery front lawn look nice.

Thursday 25th. Nights have been unusually cool; days hot enough. Steve met with some people this week with a view to possibly improving the monastery infrastructure.

Friday 26th. Brother Leo visited his family doctor today for the first time in several months, it went well and things look good for him. On the way home, Brother Leo was able to see the sisters’ construction project. The newness of this step for them makes the moment of seeing the building take shape quite special.

Saturday 27th. A young religious is here for a retreat in preparation for her final vows. She had not been here in years and was very happy to see it all again.

Sunday 28th. Guesthouse bookings for August are fewer. Bede feels this might be because another event is overshadowing the August 15 novena, namely the world Acadian Congress, which lasts two weeks in the middle of August. Mention of the name of the Moncton Priest who will be preaching the novena this year can bring happiness, I noticed; he fit in so well as the local parish Priest several years ago.

Monday 29th. Brother Glic towed the big water tank out to the edge of the garden, for watering. A treadmill for exercise appeared today near the back door, and soon it will be moved to its spot, but where?

Tuesday 30th. Work is underway to level the crosses in the cemetery. In our many windows, the spiders have stepped forward once again. Their ready-to-rumble stance does not seem to vary much, but maybe they have a nicer life than it seems.

Wednesday 31st. A berry picker who has seen his share of summers showed up from the Miramichi today to stock up, also to talk about life a bit; life in general looking a bit grim in this new century, but without discouraging him. ‘It is what it is’, he said. He set to work; those berries didn’t stand a chance!