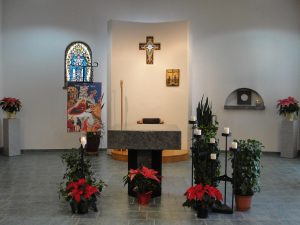 Sunday 1st. Dom Bede extended his best wishes at Chapter this morning, then the monks saluted each other, making their way around our round table. 2017 Calendars were distributed. Dom Bede outlined the principal dates for the year, which include trips to Italy more than once or twice, and even a trip to California.

Monday 2nd. Today Brother Léo was recounting the exploits of Tippie, our farm dog of years past. Tippie was able to round up cows, make each cow go where it should, then return to Léo happily, basking in his praise. These days, we have cats but no dog.

Tuesday 3rd. A wicker basket in the newspaper room holds the numerous cards and chronicles we received for Christmas. Some of the monastic cards have strikingly beautiful depictions of Christ, Mary, Joseph. The card from the Irving Oil company has a smiling snowman and an Irving logo: guess that’s all one needs!

In the refectory, the Christmas treat stock has dwindled, and we have eaten our share. Left are the Chicken Bones; these are a New Brunswick confection dating from the 19th century, a spicy, cinnamon-flavoured hard candy shell filled with bittersweet chocolate. Tiny.

Thursday 5th. Dom Bede was not feeling well, so he called for an ambulance well before dawn this morning. At the Miramichi Hospital they diagnosed a major heart attack, and transferred him to the Saint John Hospital, which is specialized in heart medicine. They performed a cardiac cath, removing the main blockage and placing a stent, enabling his return to the Miramichi Hospital the same day. Father Clovis, who received a stent there himself, was struck by the hospital’s efficiency.

It was strange to be so suddenly without Bede, and unsure of how things were going. You could feel hearts going out to him.

The Trappistines treated us to a personally delivered Turkey dinner with desert today, prepared there, in lieu of our scheduled visit to them with Bede. They know their turkey!

Friday 6th. Brother Stephan visited Dom Bede in the Miramichi, finding him surprisingly well. While in the Miramichi Steve stopped to get some veterinary supplies: copper solution, iodine tincture, and blu-kote spray, a fungicidal wound dressing.

Saturday 7th. The pipeline cooler sprung a minor leak this week, sending a jet of water down into the milk house. The milk is cooled with water before it hits the tank, as of several years back. The new refrigeration tank we got last year works like a charm. An eye is kept several times a day on its digital thermometer.

Sunday 8th. Father Innocent visited Dom Bede, found him well, but reflecting on the doctor’s having indicated that he had a significant heart problem. When he got back Innocent managed to get some cross-country skiing in this afternoon. The wind has blown fine patterns on the snow behind the monastery. Winter is young.

Monday 9th. Dom Bede was released from hospital this afternoon, and got a drive home on a very cold but sunny afternoon. His plan is to rest up for the first few weeks, joining us for meals. Today he began to catch up on his e-mails. It was a joy having him back at table.

Tuesday 10th. The increasing sun is making the shadows of the trees slowly stretch further out onto the lake. First full moon of the year Thursday; that does not seem to touch the current-day monks the way it did some in the past.

Wednesday 11th. The Chapel looks quite different with the poinsettias gone, the icon of the Nativity gone, too. Similarly, the refectory is now bare.

On the third floor, Father Clovis has arranged buckets of various sizes to catch the water if and when it drops from the ceiling, happily this happens at a few points only. In the spring some contractors will re-assess the situation and hopefully sort out what is causing the very intermittent leakage.

Thursday 12th. Warm temperatures, high winds: bark blown off trees instead of branches this time. At lunch, we are now having read our Constitutions in place of the Roman Martyrology, just before the prayer of thanksgiving. This is in preparation for drawing up our house report for the General Chapter in Assisi in September. The Order has also issued a brief questionnaire to inspire our input to them.

Friday 13th. An aspirant has joined us for a one-month stay; always a special moment. Father Innocent has prepared a room for him around the middle of the second floor.

Saturday 14th. In early winter the monastery from outside is striking evenings and mornings, a few lights on, the building alone against the dark sky.

A guest from the north of the Province has been by. Signing our guestbook, he added a fine illustration, a scene of the sky. Brother Léo began celebrating his 90th birthday (the 18th) today, with guests for lunch including his nieces.

Sunday 15th. Yesterday, some of the hoses froze in the milking parlor. Pouring hot water on them remedied the situation. This afternoon, two figures could be glimpsed skating on our lake. Looks fun, but looks cold. 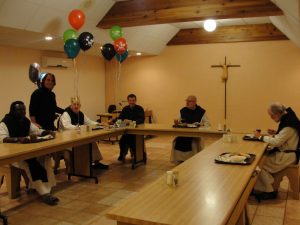 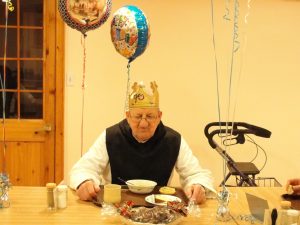 Monday 16th. The cold is an issue when recently-born chicks arrive in our barn as today; the temperature inside has to be 90. Today, it took a bit more ingenuity to heat things up.

A young fellow from Moncton was by today to test our fire alarm system, which meant the sound of ringing bells, a few beeps, plus some cool lighting from the emergency system.

Tuesday 17th. An old friend from the United States is up for a visit. Work is underway to replace the shower nozzle in the second floor east washroom. Tomorrow is the big day for our Brother Léo, who would never have guessed he would live to 90, and has done so maintaining a fresh perspective on things.

Wednesday 18th. At midday, a very light snow fell slowly, under partly sunny skies. Mother nature was saluting: Brother Léo. He ably supported today’s Léomania. Family were by. Too many phone calls to be able to answer. Decorations including a little crown for him to wear. A calf born today was named Léa in honor of him. “You’re only 90 once”, he said. When Bede asked him, Léo said his earliest memory was from Dorchester, New Brunswick when he was about 3 yrs. old. His father holding his hand, walking with him as he stepped up onto a curb.

Thursday 19th. The elevator is getting a new, geo-thermal heater, which meant shutting the elevator down for several hours. In Moncton, Brother Henry saw his Argentinian neurologist once again. Always a worthwhile visit, and always an interesting exchange afterwards. Back at his residence when someone suggested praying for America’s president elect, a nurse was stopped short. After looking at me in silence for a few moments she said: “Do you think he can be saved?”

Friday 20th. Brother Léo received some scented candles for his birthday, which are providing aromatherapy in the guesthouse.

Saturday 21st. The ice on our long drive has added an ‘adventure’ aspect to getting out.

Sunday 22nd. A guest from the Miramichi has been here, with no way home. This morning our aspirant Mark gave him a lift back. 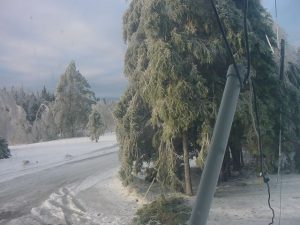 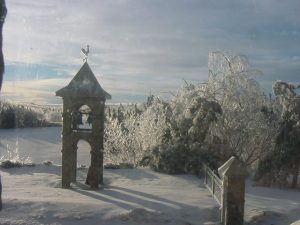 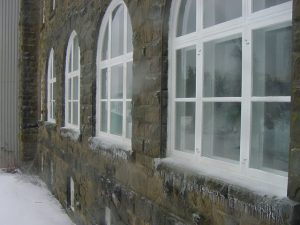 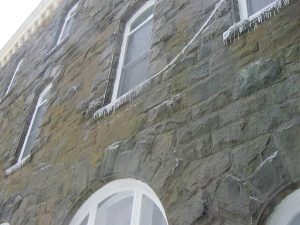 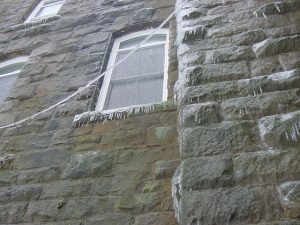 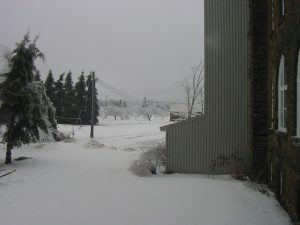 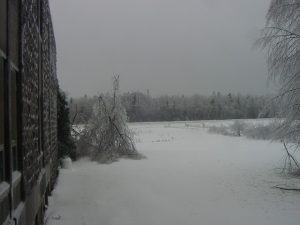 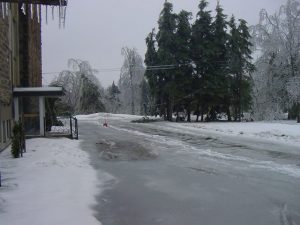 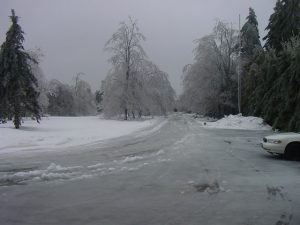 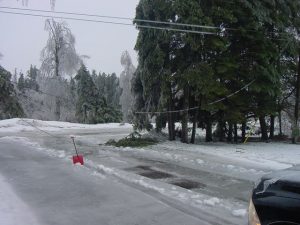 Monday 23rd. A little layer of snow highlights the ridges on the red metal roof of the annex/’old novitiate’ these days, melted only over the laundry room. We got a new dumpster from Gaudet Garbage this morning. The old dumpster’s lid was broken. The barn cats had been taking more interest in the dumpster in that state, trying to look inconspicuous as they inspected it. They seem a bit disappointed now.

Tuesday 24th. Two metallic Happy Birthday balloons for Léo are still floating in our refectory, but are beginning to sway a bit. In the village today, a fellow was telling us how he helped P. Camille with the publication of his book. In 1973, our P. Camille published a well-received life of Msgr. Richard, someone who played an important role in a monastery ever coming to be in Acadie. Judging from the fellow’s age, he had confused P. Camille with Robert Pichette…perhaps because Pichette occupied a monk’s cell while researching and writing his own 2002 book on the monastery, Il est heureux que nous sommes ici.

Wednesday 25th. There was an outage-causing ice and rain storm, with a little snow thrown in. The cold was not severe, but the ice coating on objects seemed thicker than ever. Several of our trees lost several big branches. Our yellow slippy floor signs with the dancing person on them found a new purpose today: they now indicate to drivers that they risk driving into downed power lines in front of the monastery.

Thursday 26th. The two back-up generators, in service for over twenty-four hours, needed a diesel fuel top-up today. Despite the ice, our sisters joined us for lunch here today; it was a joy to be together again and hear a bit about their Christmas.

Friday 27th. Brother Stephan had to service the back-up generators, shutting them down for a few minutes. Around the generator shed’s exhaust grill it is now springtime, with bare ground and green grass.

Saturday 28th. With sunshine, the first drops of melting ice could be heard this morning, but not enough to dislodge much ice from trees and wires. Adjustments to the electrical system had to be made today, so that there would be enough power for both the elevator and full geothermal heating. Mission accomplished.

Sunday 29th. After Lauds, Brother Stephan went to pick up some of our farm hands who are without wheels. Brother Henry was by for lunch. He was asking how our trees are doing; not bad was the answer, although some damaged trees will need some professional trimming to save them. Henry finds the ice-covered trees beautiful. At lunch, trees from far and wide were discussed. At one point in the discussion someone confused the monkey-eating eagle of the Philippines, which does exist, with a monkey that catches eagles to eat, which does not exist…that we know of.

Monday 30th. Peter returned from California yesterday. At table, including Clovis we are now ten, which is quite a number for us.

The new light was installed over the altar in the chapel, and is giving its all. The altar is square and small, of stone matching the ambo, black and grey.

Tuesday 31st. Behind the monastery there are tractor tracks from multiple trips to fill up the emergency generator with diesel fuel hand-cranked from barrels into the generator fuel tank. Today, the electricity came back and the hum of the generator ceased. Work is well underway cutting and hauling the wood from fallen parts of trees around the monastery. Most of the debris has been gathered, but a person can still come across fallen branches here and there, some over six feet long.