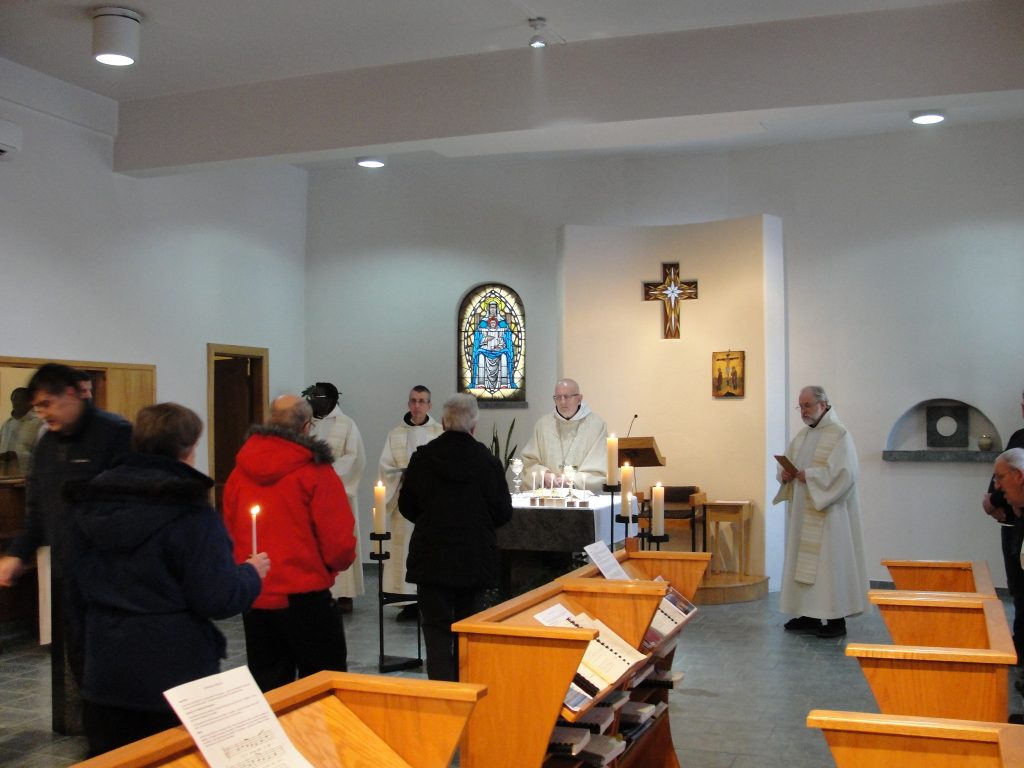 Wednesday 1st. Our dump truck got a new coat of paint and is now blue. One of our farm hands is preparing to drive to Nova Scotia to sell a young bull at an auction there tomorrow. Spring is a ways away, but today two of our youngest calves were gamboling about near their hutches as though it were a sunny day in May: is it a sign we’ll have an early spring?

Thursday 2nd. Dom Bede presided Mass today for the Feast of the Presentation. It was his first time at the altar since his heart attack, adding to the importance of one of the biggest feast-days of the year. Brother Léo was recalling how on the Feast of the Presentation, as a boy in Memramcook he would join in visiting people door to door in celebration. I was surprised that Father Clovis saw nothing like that in the world he grew up in, further north in the province.   Some people were very happy with our simple Candlemas ceremony.  The man came to repair the heating system.  One of its compressors had got burned out through the electric surges caused by repeated power outages in the aftermath of the ice-storm.  Father Graham left for a week at Val Notre-Dame, our monastery in central Quebec, in connection with his role as regional secretary for formation.

Friday 3rd. – Brother Stephan chipped a lot of ice off the bells which had ceased to function for a day or two.  The little bell now works.  The big one has an electrical fault.  Just another effect of the icestorm that hit the province on January 24-25.  Some people are still without power and many are reporting damage to installations related to interruptions to the electricity supply and prolonged use of stand-by generators.

Saturday 4th – This afternoon the big bell was made sound.

Sunday 5th – With Father Graham away and the abbot not yet back to concelebrating after his heart attack, there are only two priests at the altar for the time being.  Father Innocent presided the Sunday Mass and preached an appreciated homily.  Father Roger performed the deacon’s functions.

Monday 6th – Peter, our Vietnamese postulant, left us after living here for seven months.  A local electrician came to replace the supply cable to the pottery that had been ripped off the wall during the ice-storm of January 25th, just as forecasters announced another ice-storm for Tuesday to Wednesday.

Tuesday 7th – The electrician came back again and made another attempt at getting the downed cable back to its proper height, but finally decided it was outside his competence.  It is a job for more than one man with different equipment from what he has.

Wednesday 8th – The abbot left for Bathurst where, tomorrow, he will undergo a whole day of tests on his heart at the hospital.

With the full moon out tonight, the remaining ice on the trees shone along with the stars.

Saturday 11th. Our aspirant Mark departed, happy with his monastic experience. Dom Bede slid Mark’s stall into the scriptorium and we were back to seven in-house. At the Sisters this morning, sales of ‘retailles’ were going strong. Retailles are the leftover pieces from production of hosts for the Mass and are a popular snack in these parts. The Sisters, like us, are thinking that their trees may need professional cutting come the Spring.

Sunday 12th. We polished off a little more of Mark’s fish chowder at lunch today. Dom Bede is back to concelebrating Mass, which is great, and tomorrow he gives his first Chapter since early January.

Monday 13th.  As winter whitens up, a little animal can sometimes be seen on the lake, crossing. Is it a coyote? Hard to say from far away.

Another snow storm began this afternoon. Some of the windows in the barn were blowing open due to the extreme wind. My mother says that as part of global climate change, the world will become windier and windier. Is she right?

Tuesday 14th. The first birth of a calf has taken place in Barn #3, formerly a chicken barn. It is a mild-mannered bull.

Today we celebrated the memorial of Saints Cyril and Methodius, patrons of Europe. Our book of prayers, from France, has special February 14th prayers for Europe: nice and thoughtful.

Wednesday 15th. In chapter this morning, Father Graham talked about his visit to Val Notre Dame, a community that has had a special role to play in the lives of the other Canadian monasteries. They are the community which transferred from Oka to a new, smaller monastery the monks themselves were involved in designing.

It was Québec’s once a year la poutine week while Graham was travelling, which gave rise to discussions with the Val Notre Dame monks concerning Dom Bede’s take on, even his knowledge of, poutine. At the end of today’s chapter Bede reiterated his views: Acadian poutine (poutine rapée) yes; Québec poutine, thanks just the same.

Thursday 16th. Early this morning, the train’s whistle could be heard, longer than usual, maybe because it is snowing again and the visibility is poor.

In our guesthouse, Joline and her Mom Léa have gone through the laundry/utility room, cleaning it, and throwing out stuff that had collected there over the years.

Friday 17th. In Chapter this morning, Dom Bede announced that Father James from Spencer will be giving our retreat this year. It will be in November. This will be the first time a monk of Spencer has been by to give talks since Brother Aelred was here in the 1990’s to give conferences for monks and one nun preparing for solemn vows.

Saturday 18th. Father Innocent has been shoveling off some of the greenhouse, whose little glass panes risk breaking under the snow’s weight.

Dom Bede looked in on Brother Henry in Dieppe today. Henry is well but says that his furniture has been attacking him. Accordingly, the big blue chair which doubled as a lift for him has been replaced with a tamer version.

Sunday 19th. Brother Glic has arranged a new, second altar light for Sunday Adoration and it made its debut this evening.

Monday 20th. Brother Stephan set out for the hermitage for a few days’ retreat. The hermitage has a deck on the lake, and depending on the time of year, the woods offer many a trail for walking. This time of year, snowshoeing is more the thing. We are close enough to the highway that from outside the hermitage, cars on Route 126 are audible, masked visually by a thicket of trees.

Tuesday 21st. A former employee showed up to say hello today, and talking to him it was a joy to pick up where we had left off several years back.

Wednesday 22nd. From being smooth, the snow’s surface is now an endless series of tiny valleys, particularly visible at dawn and dusk. A gentle spectacle in what has been an at times harsh winter.

We’ve learned of the death of Father Bernard Johnson, who’d served the Order in many capacities, including as Abbot of two US monasteries, Conyers and Vina. He was a man who used his considerable gifts humbly and joyfully. Not the sort of person you’d be in a rush to say goodbye to.

Thursday 23rd. Brother Glic has been preparing for his trip to Rome in mid-March to attend the monastic formators program. He’s received a list of fellow participants: more monks than nuns this year, from 19 different countries including Switzerland and Peru.

It has suddenly become mild enough out to bicycle, but Dom Bede prefers to wait until the long front drive melts; otherwise, one has to walk their bicycle to the bare road.

Friday 24th. A priest friend has given us a gift basket, all done up with a bow, of canned and bottled seafood. Lobster, but also big cans of New England Seafood Chowder, which is a package you don’t see often around here. This will make for a fishy sort of Mardi Gras.

Saturday 25th. Americans are sometimes reputed to be a people that mix poorly with the English, but this is not always the case. Like T.S. Eliot before him, émigré Bill Bryson, whose travel book we are hearing read in refectory, is an American who not only gets the idea of English life, but furthers it.

Sunday 26th. Father Innocent has asked to transfer his stability to our monastery, a proposition which was welcomed by the community, which voted on the matter this morning. As a priest is incardinated somewhere, so too a monk ‘has his stability’ somewhere; usually, but not necessarily living there, too. Father Innocent recalls his arrival here in 2008: Father Adrien was eager for Innocent to begin saying Mass, because this was no longer easy for Adrien. 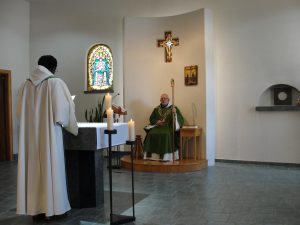 Monday 27th. In Chapter, Dom Bede gave us an outline of how Lent will go this year. Each year is slightly different, combining for the most part practices from Lents past. There will be Lenten reading together in the scriptorium after Lauds but this year, we will forego bringing our books to chapter to show what we have chosen. Desserts on Sundays only. Chapter once a week, Saturdays to share our reflections on questions preparatory to writing our House Report for the General Chapter. Question 1, for this Saturday: “How would you…describe the Cistercian charism…as you desire to live it out in your community?”

Tuesday 28th. Father Innocent transferred his stability at Mass this morning, reading his declaration in front of the altar after the homily, as Bede presided. A happy moment!

Dom Bede joined the sisters for lunch today to celebrate three March birthdays in a row the other side of the track: Alfreda, Anne Marie, Jean-Marie. 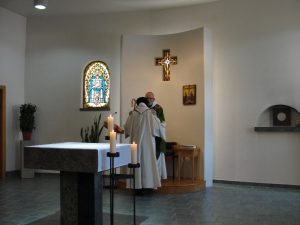 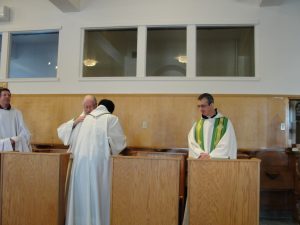