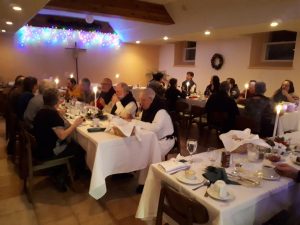 Saturday 1st. The extra chairs from last night’s feast were put back in place. Father Bede has distributed cards detailing the change to the French-language Our Father which is to take effect in Canada as of Mass tomorrow.

Sunday 2nd. Dom Mark Scott, Abbot of New Melleray Abbey in Iowa, arrived last night. Happily, he will be staying with us as he takes part in the regular visitation of our Sisters’ Abbey.

Monday 3rd. The New Brunswick Archives Advisor was by to assess our archives: past work done on them; future work which could be done. In next to no time, she had done her work. The documents are almost in order. The photos are not. Certainly not. She said we have an unusually large number of photographs compared to religious communities similar to our own, with many early twentieth-century photographs. Glass negatives are in good condition. There is also in an uncatalogued cassette audio history; separate interviews with older monks.

Tuesday 4th. Snow comes crashing off the roof now and then.  This morning for breakfast we had spinach toast left from supper. Today Simone our cook explained to the visiting Dom Mark her secret for making fish burgers.

Wednesday 5th. Steve had business in Rexton, New Brunswick today. It is a little-seen corner of the province. The way there led through villages and forests; and past the abandoned house where one of our monks, the late Brother Gerard Bordage was born. 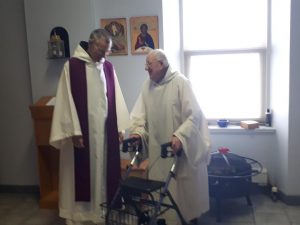 Thursday 6th. The visitation finished at the Sisters, Dom Mark made his way back to Moncton today, in preparation for an early-morning flight tomorrow: he will be back in Iowa before lunch Friday.

Friday 7th. This afternoon, I rolled up the blind after my nap to find a very cold squirrel outside on my window sill. Given the distance from the ground it seemed an out of the way and less-than-convenient spot for him to be, and to judge from his look he agreed.

Saturday 8th. Simone made Danishes for us for breakfast this solemnity of the Immaculate Conception.

Sunday 9th. Father Bede has been working this week on a new printing of the liturgical books for Mass, the Gradual. Brother Stephan has found a used Korg Midi Sound Module for keyboards, which will give him a new palette of hundreds of sounds. He said it even has a Chisholm reverberator.

Monday 10th. A few Christmas cards from guests and friends have arrived. Each card’s written message reveals something of the sensitivity to Christ of the person who sent it.

Tuesday 11th. Bede finds that the new French translation of the Our Father is smoother in its verbal rhythm than the old one was. One realises the word ‘soumets’ stuck out, in the old translation, he said; hard not to agree.

Wednesday 12th. Slowly I’ve realized someone has spilled some Tim Horton’s coffee on the tile, ground floor, near the bulletin board. The distinctive smell helps give our corridor a festive feel.

Thursday 13th. Brother Stephan has been clearing snow on the dirt roads east of the monastery, leading through and out of our property. This is the circuit Brother Henry’s hermitage is on. It also leads past a big (for here) lake. It leads past old logging trails, and it is the loggers of today who hired him. We hear them sometimes, it is a faint and unusual sound. They are doing thinning, rather than clear-cutting.

Friday 14th. After some unscheduled hijinks with it, our farm truck is temporarily taking it easy. Meanwhile, our regular pick-up has gained a certain machismo, thanks to extensive service at the auto dealer’s shop. 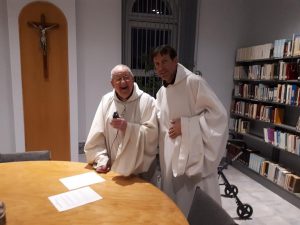 Brother Leo and Brother Stephan in the chapter room.

Saturday 15th. The main message on the phone, giving access to different extensions, was changed this week with a little help from a technician. Brother Henry was in to the dentist this week. As she worked away, the hygienist was sharing her views on life, quite interesting. She wanted to know what it was like to be out of dairy farming. As has happened before, the person asking already has a detailed idea in her mind of what it would it be like, and whatever one says in reply plays off that.

Monday 17th. I was looking at the relatively new repair shop before dawn, its high roof, and thinking how nice it would look with Christmas lights. The geothermal technicians were in. A long truck arrived to deliver a pallet of Trappist Preserves for the store, shipped from the monastery in Spencer, Mass. The driver was struck to suddenly be at a monastery, but he was so much himself it was impossible to tell, struck in what way. As our doors are ordinary-size, he left the pallet on the road between the monastery and the lake.

Tuesday 18th. A bit of sun, and snow being flung through the air by machines brought back memories of snow days that went the right w 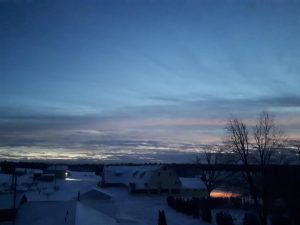 ay. In Chapter, Father Innocent mentioned a tradition according to which an angel told Pachomius how many Offices a day should make up the monks’ communal prayer, and why.

Wednesday 19th. Because the snow drifted so much after falling, Brother Stephan had to plow again today. During meditation after Vespers, with the lights turned off, someone sprung into the Chapel, turning heads, explaining to Brother Glic he had to deliver a part to Brother Steve. It looked like a metal cone.

Thursday 20th. Simone made us a pizza-style blueberry desert.

Friday 21st. With water seeping through the foundation into the basement entrance I was wondering, what would it be like if a millionaire dropped a bunch of money for renovations. Once, about twenty years ago, a Texas millionaire friend of a friend was by, and we showed him around inside, everywhere. He was one of the friendliest people I’d met. As I was wondering at his smile, he exclaimed: “These fellows (the monks) don’t have computers in their rooms! I’m going to give each one of you a computer!” As he talked with great satisfaction about popping computers here and there—did we actually need them?—I thought, he’s not going to give us money. Then he didn’t give us computers either.

Saturday 22nd. We have cheese a-plenty for Christmas. 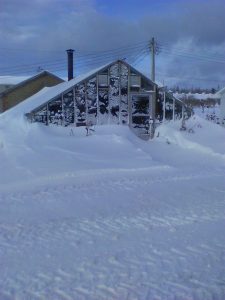 Pretty patterns on the greenhouse

Sunday 23rd. We sang the last of the ‘O’ antiphons of Advent, a sort of penultimate preparation for Christ’s birth. Steve usually does not sing along while accompanying us on organ, but for these he does. 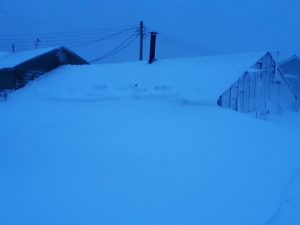 Monday 24th. John and Father Innocent have been re-arranging the reception area, which is small. The town is quiet, and as Christmas nears it really can seem like a storybook town, in the sense of the niceness and consistency of different characters. A storybook with new stories added, not known not long ago. God brought us through to another Christmas Eve, with both variation and continuity in blessings, friends; in busyness and prayer. There was a small group on hand for evening Mass, and very focused. Having some unusual attendees, including my younger brother, who made an effort to get here, seemed to add a solemnity.

Wednesday 26th. Though chocolate this year is abundant to the point of slowing us down, monks are getting through cheese at an impressive rate; the Gouda, the Swiss, the Gorgonzola; the semi-ripened, the we’re-not-too-sure.

Thursday 27th. An old friend of the community arrived with fresh smelts, those who like them like them a lot, and these were cooked up nicely in no time.

Friday 28th. Before dawn, soft shadows formed on the lake before you’d think there’d be enough light. Maybe part of the magic of winter is the feeling there will be no further to go, we’ve stopped, time has stopped. The sense that things will always be this cold and still. Brother Stephan worked this afternoon and evening on the emergency diesel generator. The gas line had frozen, and a battery had blown. This time of year, it is especially nice to have the generator ready in case of an ice storm.

Saturday 29th. Maurice our cook arrived at work this morning singing. Brother Glic was watering the many plants in the scriptorium, while John and Father Bede were having a look inside the wall-mounted heating units.

Sunday 30th. I asked Maurice if he is a morning person, he said, yes. Prayers for use on the Feast of the Holy Family, produced by Cistercians, are fine and seem to carry more meaning the more frantic the world becomes. I wonder if there is a Cistercian spirituality of family, because the prayers share a strong focus, sensibility, simplicity.

Monday 31st. Two old friends from out of province arrived on retreat, neither knowing the other would also be here, and that they would have the happiness of meeting. Father Bede got over to the Sisters to say Mass for them this evening instead of tomorrow morning, snow having been forecast.