Monday 1st. Our computer technician Brett was due to visit us this morning, but then it did not take place. Today was New Brunswick Day, so I guess it’s normal he would not be at work. New Brunswick Day is a subtle feeling and event, aside from things being closed. Father Jason Touchie, Graham’s younger brother, arrived today for his annual retreat. Their parents joined them here later on in the week.Tuesday,

Tuesday 2nd. A lady walked in the front door today and said ‘where’s the pottery?’ She had seen the pottery sign out front. Like many first-time visitors, she said she had driven past the monastery hundreds of times without stopping in.

Wednesday 3rd. Guests arrived for a retreat today but left before nightfall because they found the guesthouse too hot. Along with it’s being hot outside, field and stream have become dry; locals who go to their favorite stream to fish notice the difference. This afternoon, Msgr. Jodoin the Bishop of Bathurst brought two priests from Montreal to visit Brother Glic, himself a former Montrealer. The visitors went out to the barn to find Glic where he is most afternoons, milking the cows.

Thursday 4th. Brother Henry saw his dentist again today. Only three more visits to go, but those will be in September.

Friday 5th. Dom Bede reappeared in community today looking tanned and travelled after a few weeks in Europe; also sporting a longer hairstyle that is to say, he has hair.

Saturday 6th. Lucien has been working finishing the new wall inside the milk house. It is covered with very smooth plastic or vinyl, same as in the milking parlour: smooth to allow for better and quicker cleaning.

Sunday 7th. Usually, the swallows are flying about at top speed feeding on what we cannot see just before dusk. Lately, maybe because of the heat, you see them around dawn, less numerous and flying a bit higher

Monday 8th. An emeritus farm hand was riding shotgun (so to speak) in the silage dump truck today, enjoying every minute of it. In Chapter, Dom Bede gave a nice summary of recent travels which brought him to: special celebrations, family, holy places, monasteries and monks, and even to Durham, whose Cathedral houses the remains of Saints Cuthbert and Bede.

Tuesday 9th. There were only three people from outside the community attending Mass this morning. All were sitting in the backmost row. The Novena for the Assumption is going full force in town, making these days like no others locally, drawing away people we often see here, but also bringing people back to town and the monastery. This evening at Compline while we were in the middle of a Psalm, a retreatant came up to Brother Léo to draw him away. A sink’s drain had fallen apart and had to be reassembled.

Wednesday 10th. In Chapter, Dom Bede wondered aloud if it was true, as we’ve heard, that people were rougher in Saint Benedict’s day than they are today, necessitating the penal code of the scope we find in the Rule.

Thursday 11th. The big metal Cross which caps the monastery facing the lake is itself topped by three crows who’ve come to enjoy perching there. Of course this is a great place for them to launch out over the lake and trees from. The eagle has become more predominate here, practicing a sort of air traffic control of his own from time to time, which can change the plans of the other birds. However, he respects the Cross.

Friday 12th. After Father Roger’s visit from his brother yesterday, a group of older ladies from Memramcook visited today and insisted on seeing Brother Léo. It was during meditation, but he got up to go see them.

Saturday 13th. The overhaul of the monastery website is now complete. It has a fresher and a finer look, thanks partly to more up-to-date software.

Sunday 14th. At the entrance to the milk house, a little statuette of a cow resting has been added. The cow is white, and the tiny name tag around her neck re 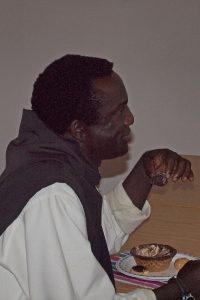 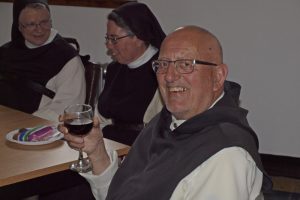 Celebrating the Assumption with the nuns. 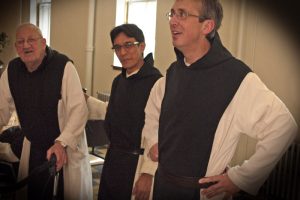 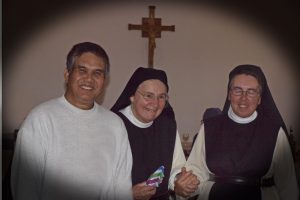 Monday 15th. The big day at last. The Assumption novena in town is said to have been the best ever, preached by the curé, Father Doris Laplante. That bodes well for us as Doris will be preaching our annual retreat this year. Having brought our Brother Henry here yesterday for prayer and celebration, today we gingerly set out for the Trappistines for mid-day prayer followed by a very nice lunch. At lunch, we were discussing the music each of us listens to, and it turned out that one of us had been present at the Woodstock Festival. This August 15th marked the 47th anniversary of day one of Woodstock.

Tuesday 16th. The fog was so heavy this morning that when the sun came out, the moisture on the hedges looked almost like frost. Some of us have been feeling a little weighed down by too much food at the sisters yesterday, but were back on form today. It will be our turn to play host in September. A barbecue with the sisters is planned on our own lawn, the first in quite some time.

Wednesday 17th. The red chapel doors are being repainted, and I guess because heat is involved in the process of getting the old paint off, a rich smell of wood has been present in the chapel. 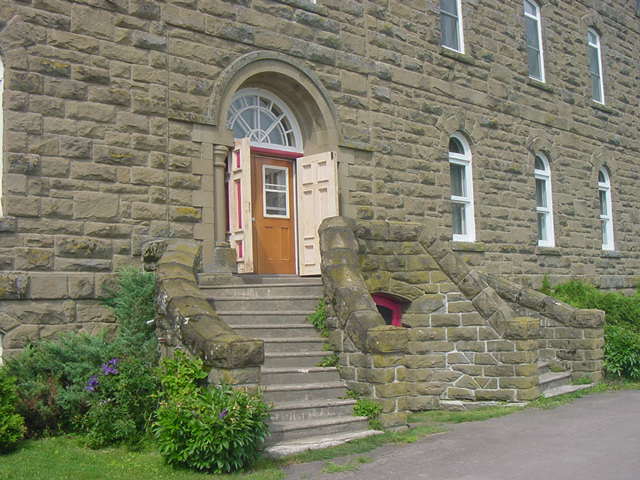 Thursday 18th. Father Clovis returned from his time off, slightly ahead of schedule.

Friday 19th. This morning there were no cars parked out front. A striking change after the different guests we’ve welcomed the last seven days. Among others, there was a couple from the States, back after five years’ absence. Two Sisters of the Eucharistic Heart of Jesus, from Halifax. A mother and son. And a philosophy professor freshly arrived from Paris via Montreal. After snapping some photos for the website this afternoon, Bede showed pictures this evening from his recent journey.

Saturday 20th. Bede has been renewing the Eucharistic reserve, a process which takes place every four months. We have two tabernacles now, but had three when Henry was here in his hermitage. For the feast of Saint Bernard Bede decided to use the Mass readings of the day, which made for a fitting homily.

Monday 22nd. In Chapter, the question arose of where to hold the barbecue in September. There are two choices: lakeside, or facing Villa La Platte Road. We have tried both successfully, for events such as meetings of superiors. Once, we experimented with having retreatants join us for a meal outside. It was an ordinary day, the idea being to simply spend a mealtime with them for a change, and talk. Nice, but it seemed to bewilder the guests a little.

Tuesday 23rd. A white primer coat went on the big chapel doors. Brother Henry, his brother, brother’s wife and their two sons showed up for Sext, lunch and None; a joyful moment. They’ve driven up from Massachusetts to spend holiday time in the province, near Henry.

Wednesday 24th. Just before Mass ended we heard a little noise outside. The painter was starting work again on the red doors. He is a real craftsman, and uses a little roller to paint. He seems like the classic quiet Acadian handyman.

Thursday 25th. At Mass this morning, as people sat down after communion, the wooden pews made quite a creak, as it remains very humid here. A visitor from Québec stopped overnight. It was his first time here, but he is familiar with Val Notre Dame, Saint Benoît du Lac. This type of visitor from Quebec, often en route somewhere other than here, is not rare, and always nice to welcome.

Friday 26th. Our refectory travel book featuring the deep south of the US has brought its author, Boston’s Paul Theroux, to the original home of novelist William Faulkner. Theroux says Faulkner is the second best southern writer of all time, after Mark Twain. All the same, Faulkner comes in for quite a roasting.

Saturday 27th. At the grotto, the green metal rails on either side of the walkway over the spillway are being repainted. Though the grotto is not in the condition it once was in, in terms of flowers (planted by an association of volunteers) fences and other things, it is lovely.

Sunday 28th.  Our Acadian-American neighbour, now preparing to head south for the winter, gave us a big bowl of blueberries he had just picked. Father Thomas, one of the Holy Cross Fathers from Saint Joseph’s Oratory in Montreal, stopped by to see Brother Glic, who gave him a tour. Thomas says the countryside around here reminds him a little of his native Bangladesh.

Monday 29th. We have a little dish for milk for the farm cats; it is in the entrance to the sick calf dormitory/juice-making facility: a brick shack adjacent to the barn. The press is in there now, waiting to work its magic on this autumn’s apples. Feeding the calves, putting a little milk in the cats’ dish I noticed someone had left them some food. It looked like eel. Could the eel in the lake actually be that big?

Tuesday 30th. Our dumpster was a bit more full this week. The building that was being used as a sculpture studio on the front lawn here is being emptied out, with a lot of plaster debris to dispose of. Our upcoming lakeside Bar-B-Q will have a tent and everything—just like Downton Abbey. This morning, Simone the Cook and Dom Bede were surveying the lawn and planning.

Wednesday 31st. Dom Bede explained that one calls the sort of tent we’ll have, with no sides to it, a marquee. This morning, Maurice Gallant was quietly working outside, filling in some of the holes in the lawn where the Bar-B-Q will be.