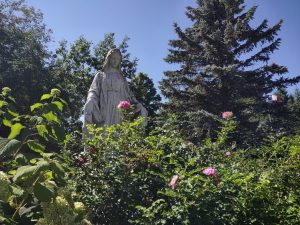 Thursday 1st. Father Roger offered Mass especially for the Care of Creation, on this world day of prayer.

Friday 2nd. Father Roger offered Mass of the Holy Spirit, to mark the beginning of the Chapter’s work, helping us to join in.

Saturday 3rd. Our Abbot General Bernardus posted his opening conference, built around dreams for our Order’s future that he gathered from the various superiors. He is able to take his time, presenting things, when he has to, but only as he has to.

Sunday 4th. Some late summer bees and white moths were working our dandelions this morning. We got to try out a new dessert at lunch, quite nice.

Monday 5th. Today, Labour day, Brother Leo was remembering his first full-time job. Having left school, he lived and worked on a dairy farm at age 15, the only drawback being homesick evenings.

Tuesday 6th. Using the John Deere, Brother Stephan mowed a path leading past the front of the guesthouse to the u-pick area. Lawn chairs out front which had been blowing around, are now in use by guests.

Wednesday 7th. Today is the 69th anniversary of Brother Leo’s entering the monastery. His parents would have liked him to change course, but did nothing to actually stop him. The fine-looking grapes of Calvaire are now attracting pickers. Five dollars the bag. 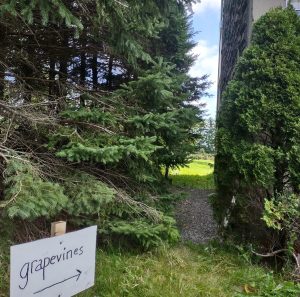 Thursday 8th. Brother Stephan is using the brush cutter attachment on the tractor to groom the roadside in front of the monastery. Guests sometimes show up for Vigils 3:40 AM. When a guest is present, the extra participant is welcome.

Friday 9th. A former monk came by for Mass, and to say hello. He had not been by in close to thirty years. The years seem to have been kind to him.

Saturday 10th. We learned this week of the death, in France of Sister Marie-Pierre Faure of our Order, who wrote the words to hymns we sing regularly, and whose work also found its way into the prayer of the larger Church community.

Monday 12th. Guests take advantage of our isolated locale to get out and do a bit of birdwatching. Things are rolling along in Assisi for our Dom Innocent, and the other superiors. As usual, the Order makes the most of having them all together briefly, by means of a fairly full schedule.

Tuesday 13th. Autumn colors are just slightly slower appearing outside this year. What is noticeable by now, is the change in the crickets’ song nights, and early mornings.

Wednesday 14th. A technician was in to fire up the mighty Calvaire geothermal heating system, and see how fit it was for another season. All loo 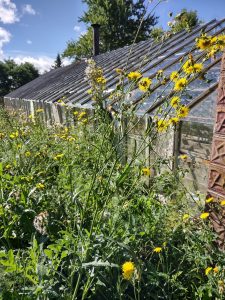 ks good, for the day when Bede switches on until spring.

Thursday 15th. Dom Innocent sent us nice greetings for our patronal feast day, Our Lady of Sorrows / Our Lady of Calvary, a day which strengthens our purpose, and bonds, all around us.

Friday 16th. We learned of the passing of Sister Rita Barrieau this week. A true pioneer in the Church, she hailed from Acadieville, as did a group of monks here, years ago, including her uncle Alyre Richard.

Saturday 17th. The apple u-pick is now underway, and good cheer seems to reign among the pickers. Some of them are recent arrivals to the area, from a ways west of here. Rogersville has become markedly more bilingual, and peacefully so.

Sunday 18th. Though Mass numbers are not great here, Mass is beginning to take on more of the feel it had just before the pandemic. At that time, Mass numbers (for Lent) were really bumping up.

Monday 19th. Father Roger offered Mass for the repose of the soul of Queen Elizabeth II, on this, her funeral day. Our monthly Offices for the dead were also transferred to this day, from the planned date later in the week. Elizabeth’s passing recalled for Father Bede the death of King George VI, when Bede was nine.

Tuesday 20th. We are eating an apple pie for dessert, courtesy of one of our u-pickers. The picking is calming down, this week.

Wednesday 21st. The Villa Laplatte Road, running parallel to the monastery entrance, received a better, gravel surface this week from the province. For now, they are not up as far as our chicken barn.

Thursday 22nd . A friend gave us their little photo album from our 100th anniversary outdoor Mass, in 2002. On that day,  foundation cross-bearer Brother Stephan led a procession from the monastery, down the hill, over the spillway bridge to the grotto. 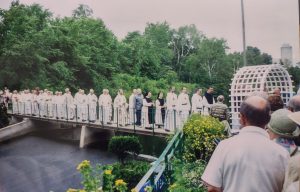 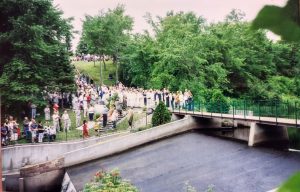 Friday 23rd. Father Graham represented the community at the funeral in Moncton for House of Nazareth founder Sister Rita Barrieau. The funeral had been hastily switched to late afternoon today, in order to avoid possible problems from the passage of hurricane Fiona tomorrow.

Saturday 24th. Fiona touched land in Canada 300 km from New Brunswick; we got more wind than rain here, and by Mass time, a little line of geese was floating calmly in a little line on the lake, as winds slowly subsided.

Sunday 25th. Dom Innocent set out from Rome. As Bede predicted, it was quite a nice day out today. There was a brief resurgence of apple picking, including three generations, in one family.

Monday 26th. Father Innocent touched down in Moncton, and made his way back to the monastery, bearing greetings from many participants at the Chapter.

Tuesday 27th. Work on the Village Platte Road resumed. An old friend came by to buy a five-day candle, have it blessed, lit, and placed before the statue of the Blessed Virgin in the guesthouse chapel.

Wednesday 28th. The apples received such a thorough picking this year, that we will forego our annual juice-making with the remaining apples. The grape u-pick also proved popular this year, first with humans, then with raccoons.

Thursday 29th. In Chapter, Dom Innocent gave us an idea of how the recent General Chapter went. This Chapter was well-attended, and was the first near-paperless one, thanks to on-site technician Ricardo. A great deal of work got done, or begun; and new ways for monasteries to share their paths with one another are being discovered.

Friday 30th. Dom Innocent managed to mow a good deal of our lawns this week.