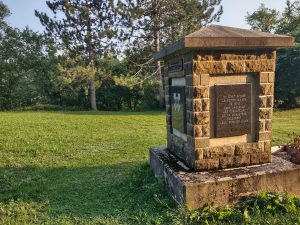 Monument to the Monastery’s Founders 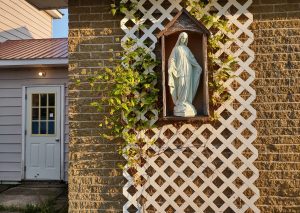 Wednesday 1st. The dishwashing machine really gave up the ghost. Today was the world day of prayer for creation, and Father Roger so offered Mass.

Thursday 2nd. One of the ride-on mowers made circles around the apple trees today. Our cemetery lawn also got a trim. It’s striking to see Brother Henry’s cross there, in part  because of his great devotion to the community, and the resulting regard he had for its cemetery. He saw finally arriving there, as the best possible earthly destiny.

Friday 3rd. Steve worked on the dishwasher, then ordered a new heating coil for it. People acquainted with the monastery from long ago still bring friends of theirs from away, to show them the Chapel, share memories…and ask about the honey.

Saturday 4th. The buzz of the chainsaw was heard this week, as a bit of firewood was readied for the greenhouse next winter.

Sunday 5th.  A half-dozen bees were buzzing as they looked for some last-minute pollen near the back door, didn’t seem to be much. At lunch 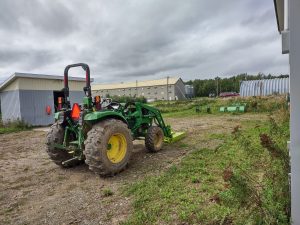 we listened to a Ray Boltz mix, with big production sound and lots of drums.

Monday 6th. Our refectory reading has brought author Tara Westover, and us, to Cambridge University.

Tuesday 7th. In Chapter, Dom Innocent drew on memories of  other monasteries, as he commented the Rule of Saint Benedict.

Brother Leo entered the monastery 58 years ago today. Shortly before his entry, his parents, taken aback at the thought of losing him, offered to get Leo even his own farm close to home, but off he went. 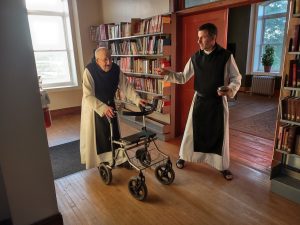 Wednesday 8th. Feast of the Nativity of the Blessed Virgin Mary. At Vigils, we heard Saint Bernard’s sermon on Mary as the star of the sea. This text was the reason for the addition of a yellow star to the Acadian flag, which was designed by the same Priest who doggedly undertook to bring Trappists here to Rogersville.

Thursday 9th. The geothermal heating system was switched on briefly and checked.

Guests are few, often new to our parts, and they seem to appreciate the Offices.

Friday 10th. Fresh produce, including peppers, makes its way into us, and onto our table. The apple u-pick, which was quite popular here last year, has re-opened, five dollars a bag. From what apples we don’t sell that way, comes the juice. Between autumns, Brother Stephan has been working on a new way to power the apple press, feeding it power from a tractor.

Saturday 11th. Not a lot of the public show up for midday prayer here, generally. However, today the Chapel suddenly filled up at that hour, with mostly young people. Turned out to 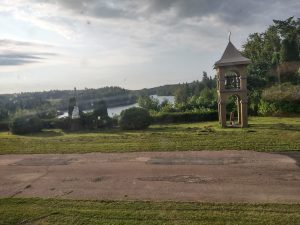 be a group from a Parish a ways away, passing through. 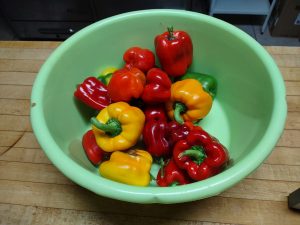 Sunday 12th. It was a quiet afternoon at the front desk, for Father Bede. After supper, kittens grey and black were frolicking outside the Chapel doors, and hiding in the bushes.

Monday 13th. We learned that Collette’s Our Lady of Fatima Church, tucked away across the road from us, is being closed. It was a striking and inspiring addition to the area, but difficult for the archdiocese to maintain, with Rogersville’s own Church so close by.

(Link to the archdiocese of Moncton’s video of Collette church

Tuesday 14th. Guests enjoy walks just as the leaves begin to turn. Today, we returned to the regular wearing of cowls at some Offices, as it is no longer as warm outside.

In Chapter, we discussed the apple orchard. We also discussed the liturgy, and different ways of celebrating different grades of Holy Days. We talked about the menu, and our diet. Tomorrow will be our patronal feast day, and unusually for us we will have meat.

Wednesday 15th. Our feast day is on a memorial and so Vigils, in a nice way, is a small-scale celebration, with once-a-year invitatory for Our Lady of Sorrows: one phrase to set up the Psalm, its melody at once mournful and joyful. Solemn Mass brought home Mary’s love, and her sufferings; also her unique way of accompanying us, and seeing things through. This evening under a soft rain, starlings dotted the roof of the old poultry barn, dandelions among the grass were closing up.

Thursday 16th. Last week’s chronicle stated that Brother Leo was marking 58 years from entry to the monastery. That was a mistake: it is actually 68 years. While Leo is approaching 70 years here, Stephan is approaching 40.

Friday 17th. Thanks to Steve’s efforts, the dishwasher is now working again, heating the water hotter than the machine had managed for years.

Saturday 18th. Dom Innocent has picked and bagged some apples for sale at the front door.

Sunday 19th. At the end of Mass, Dom Innocent announced our Archbishop’s new Covid-19 decision : no attendance of Church celebrations unless someone is fully vaccinated, or has an exemption. 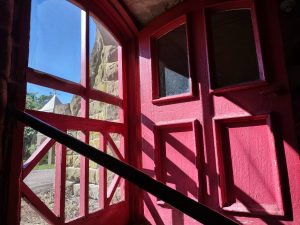 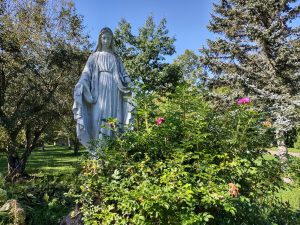 Monday 20th. The decorative monastery sign which was put in place next to the entrance in 2016 is starting to peel away. It is paint on wood, and was painstakingly varnished before being put up, in an effort to preserve the surface as long as possible.

Tuesday 21st.  This morning, Brother Stephan pulled up behind the guesthouse in the truck to do some repair work in the guesthouse. In Chapter this morning, Dom Innocent mentioned that a first round of juice making would take place this Thursday. One more juice day after that should suffice for the year, he said.

Wednesday 22nd. The big truck of a food distributor pulled up, and among other things gave us lots of choice frozen fish. As elsewhere, the province’s ‘masks mandatory’ sign was put back up on our front door, and restricted access to Mass went into effect throughout the Archdiocese.

Thursday 23rd. The new power set up for the apple juice press proved a success, giving plenty of pressure with ease, and running silently. Formerly, this press made a more-than-impressive sound when in use. Used apple pulp went to compost. Bottling of this morning’s press was finished in time for lunch. This year, four monks did the work.

Friday 24th. Our new refectory book is ‘the Meaning of Mary Magdalene’ by Cynthia Bourgeault. The cheesecloth which apple pulp was wrapped in for pressing got a good washing today.

The Archdiocese has announced updated sanitary measures from the province; these supersede what was in place for Mass earlier this week.

Saturday 25th. Brother Leo was remembering his time working at the Calvary Abbey stone quarry as a layman, and the stern monks from France trying to make a go of the industry.  That did not pan out. 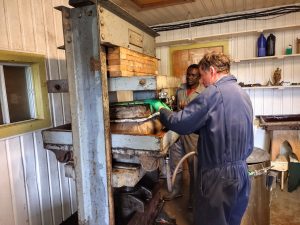 Sunday 26th. At lunch nicely prepared by Father Roger, we listened to opera overtures, including William Tell, with its appetising crash of cymbals.

Monday 27th. At lunch-time listening, Cynthia Bourgeault’s “The Meaning of Mary Magdalene” recalled how, for the author of the Cloud of Unknowing, the call to repentance from sin is a call to contemplative life.

Tuesday 28th. Although things have been relatively quiet at the front door and store, picking of apples is ongoing. It is striking to see people walking by where normally one sees no one, and it is 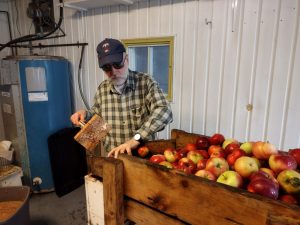 nice to see families working the trees together.

In Chapter this morning, Dom Innocent commented the Rule of Saint Benedict’s teaching on the good zeal monks seek to cultivate, stressing the importance of believing in what we are doing, going further along the path we’ve chosen, not letting the good fire within die down.

Wednesday 29th. Depending on the way work and medical appointments fall, the odd day can see us with fewer than almost ever present for the liturgy, but the community seems to adapt to this well. This week, a friend from our dairy days reappeared to help with the work, it was nice to see him.

Thursday 30th. Brother Leo was looking forward to the Feast of Saint Therese of Lisieux, tomorrow, saying “she has helped me a lot.” 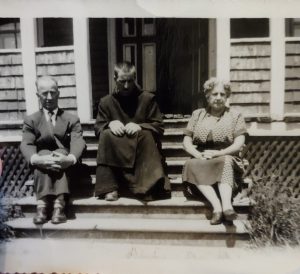 Brother Leo with his parents in 1956