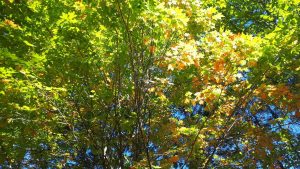 Tuesday 1st. In Chapter today, Dom Innocent announced the committee’s ideas for changes to our Liturgy. Most of the changes are slight simplifications of what we are doing presently, to reflect our smaller numbers.

Wednesday 2nd. Apples may be a little smaller this year due to the lack of rain, but they are numerous, and Innocent says quite recent rain has made a positive difference to growth. U-Pick is underway, and bags of apples are also once again available to buyers inside the front door. The walk-in fridge has been repaired, and is now humming and cooling away.

Thursday 3rd. Dom Innocent is hoping to protect the ripening grapes on his vine from uninvited diners: grapes are an enormous draw for raccoons, understandably. Other creatures, such as bear or fox, we have not seen much of, though apparently the fox was seen not far away, casting his glance here and there, recently.

Friday 4th. A helper has arrived, who is giving the lawns plenty of mowing. Brother Leo is finishing reading the history of his own village. He has mixed feelings about the book, which attempts a sort of ethnography of the pocket of Acadians Leo sprung from. It certainly got his attention.

Saturday 5th. The starlings were having an involved, and fairly loud, discussion in a big tree. Perhaps it had to do with their winter plans: starlings had come to winter in our dairy barn, once a few stragglers had succeeded in making it through the winter inside. Now the barn is gone.

Sunday 6th. For dessert, at lunch, we had a plum cake which we received as a gift. This afternoon, the sound of wind in the trees was interrupted by the calm voices of apple pickers coming and going, and enjoying the sun.

Tuesday 8th. In Chapter, Dom Innocent reviewed how we are managing with the guesthouse, and with functions on our side of the wall. All around, we are not an enormous gang of monks, and the adjustments this implies are part of what the old-timers used to call ‘la grâce du jour’. 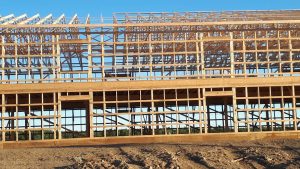 Wednesday 9th. Work resumed on the wastewater treatment site, as pumps now tucked underground were hooked up electrically. Father Bede made it in to the Miramichi. Our cats were playing it cool outside, something they seem to excel at. Truss after truss was hoisted up by a huge crane and put in place on the new chicken barn, creating the frame of the roof.

Friday 11th. Father Bede prayed for those who mourned losses on 9/11, and later on related how that day was experienced on the other side of the pond. The circular flower bed around the front lawn statue of Mary is getting a nice tidy-up. When guests look out their window, there she is.

Saturday 12th. Some family of our late Father Adrien Bordage dropped by this week. This was a joyful reunion for us. Adrien had a strong and easy bond with his family, serious and light-hearted in their regard for one another…and us. 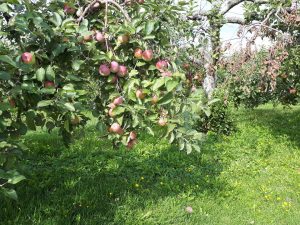 Sunday 13th. Boxes of apples are piled at the ready for juice-making, soon.

Monday 14th. Monks who wished to, were able to vote today, in Provincial elections.

Tuesday 15th. Today was our patronal feast day. The Mass is a Solemnity, here only: Our Lady of Sorrows / Our Lady of Calvary. In his homily, Dom Innocent evoked the sacrifices and joys of life here over our 118 years, beginning with the striking story of a Parish Priest, Marcel-François Richard, who set out to bring some Trappists here from France and succeeded. Bother Leo is the only monk still living who can remember some of the founders.

Wednesday 16th. Father Roger placed next to the tabernacle a nice plant we received as a gift for our feast day yesterday. This morning, rumbling let us know work was about to recommence in earnest on the wastewater system. Dig, dig, dig went the machinery, and in short order, pipe was being laid. 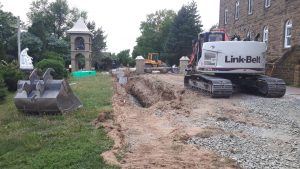 Thursday 17th. Apple juice was pressed, bottled and stored today, by monks and helpers. The Chapel floor was vibrating during Mass this morning, as work progressed outside, parallel to the Chapel. By the end of the day, the crew was tidying up the surface next to the dig.

Friday 18th. Bells for offices and Mass are out of service temporarily, due to construction. A few religious are wrapping up their first retreat here together and seem happy. It was nice to be able to pray the liturgy with them.

Saturday 19th. The bells are working again, smoothing matters out a bit. The wastewater system is now operational, with few signs above surface that it is even there. A hedge was removed in all the digging, rendering visible once more the corner stone of the present, 1927 monastery. 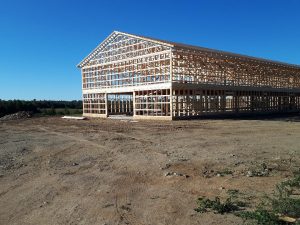 Sunday 20th. In his homily this morning, Father Bede spoke of God’s generosity, and our working on God’s vineyard through prayer. At lunch, we listened to a 1968 recording by Newfoundland musician Harry Hibbs.

Monday 21st. We awoke after the first freeze of the season; and were warmed by clam chowder this evening.

Tuesday 22nd. Bracing of the new chicken barn today coincided with the near arrival of a tropical storm. Siding would also begin to appear this week on the chicken barn. In Chapter this morning, Dom Innocent commented the Rule of Saint Benedict’s teaching on receiving guests. Monks and guests have two different, and largely separate, sharings in monastic life.

Wednesday 23rd. We learned of the death of an old friend, who once worked here a bit. He was gentle. The power went out last night, and the back-up generator helped us, once again. The tail-end of the tropical storm having passed, robins we had not seen in a while appeared on the front lawn this morning. A technician checked and started the heating system for the season, to Brother Leo’s satisfaction. 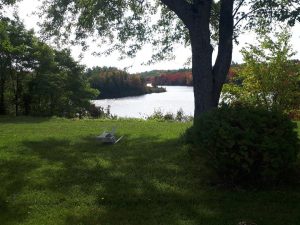 Thursday 24th. A second round of apple juice making got underway this morning, apples being ground then pressed, bottles being filled then stored. Father Bede took a ride on his three-wheel bicycle this afternoon, surrounded by ideal, mild autumn conditions.

Friday 25th. Our new arrangement at the beginning of Mass, with the number of Psalms from the Office of Tierce reduced, has begun well. The simplicity seems to draw attention to the words we are singing, or reciting.

Saturday 26th. Brother Steve tidied up a few empty cans tossed onto our scenic entry from the highway. One brand of cans seems to reappear there regularly.

Sunday 27th. Grape jelly made from grapes grown here appeared on the breakfast table this week: nice and tangy.

Monday 28th. Brother Stephan used the brush cutter on the tractor to clear part of the garden area this morning. With the monastery and guest house feeling a bit too warm for comfort due to a swing in temperatures outside, Father Bede shut the heating system off.

Tuesday 29th. Bede prepared the Chapel for another Feast, this time that of the Angels. 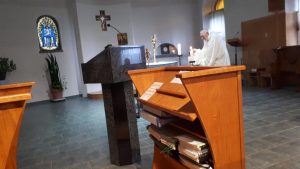 In Chapter, Dom Innocent commented the Rule of Saint Benedict on monks receiving (or giving) gifts or letters, in the context of communal living. In terms of announcements, as might be expected, this year’s community retreat will have to be held without the planned speaker from the US. It has been a while since the annual retreat was self-directed. We have much to be thankful for in terms of the run of retreat masters we have had in recent years.

Wednesday 30th. Winds strong and warm reminded Bede of Mediterranean climates…and the sirocco. By the time the wind ended today there were bright trails of leaves forming lines upon the lake, and a carpet of pine needles on the front drive. 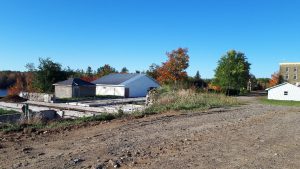 Where the barn was.