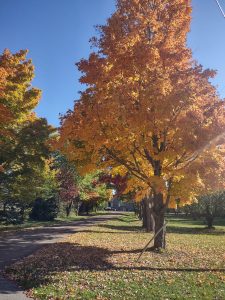 Saturday 1st. A wedding party posed for photos across our long front drive. A parish Priest who gave monastic life a try here some time ago, came by to pray with us a bit.

Sunday 2nd. There were steamed mussels for lunch, with nice October sunshine outside.

Monday 3rd. We learned today of the passing of Father Gabriel Bertonière, monk of Spencer, originally from Louisiana. He was a faithful and soulful friend of Calvaire in years past.

Tuesday 4th. Temperatures dipped below zero last night. This morning, Dom Innocent presented the text of Pope Francis’ address to our superiors, during their visit with him in Rome. Just as our Abbot General, Dom Bernardus drew on insights from Pope Francis to prepare the Chapter, Pope Francis centered his comments on four themes Dom Bernardus presented at the Chapter: communion, participation, mission, formation.

Wednesday 5th. It was Brother Stephan’s birthday today. Dom Innocent set out for in meetings in Edmundston, NB.

Thursday 6th. Father Bede eased the heating system back on, and the familiar whirr of warm air was heard once again.

Friday 7th. As the fall colors on the trees really begin to show, the apple u-pick continues to draw visitors.

Saturday 8th. It was Father Graham’s birthday today, and he received a visit from his brother Colin.

Sunday 9th. Father Roger presided Mass both here and at the Trappistines. Guests took advantage of a nice morning to explore the numerous paths and roads in the woods surrounding the monastery.

Monday 10th. The screen door to the dining area was taken down, as the big red one closes up again till spring. Brother Leo, whose room looks straight out onto the lake, was marveling at the great many geese floating quietly there this morning.

Tuesday 11th. Elections NB wrote to update voters’ lists in the neighbourhood. Brother Stephan once again remedied a silent spell for our outdoor bells. In Chapter, Dom Innocent reviewed upcoming events, as well as a past event he took part in, in Edmundston, with its updates from Bishops and Superiors of NB. Still today, there are more female religious living nearby than one might think.

Wednesday 12th. Two photographers with big cameras, went on a dual photo safari out front. They arrived at a peak moment for the fall foliage. A sprig of autumn leaves was placed in front of the altar. 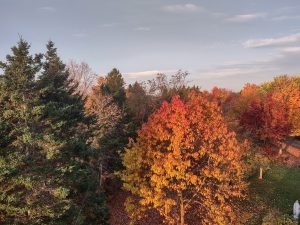 Friday 14th. Whatever the occasion may have been, those facing south at Compline could witness quite a fireworks show in the distance, across the lake last evening.

Saturday 15th. Though there are only a few retreatants in the guesthouse this week, they come from far and wide in Canada.

Sunday 16th. At lunch, we listened to a CD of music from the monastery of Echourgnac in France.

Monday 17th. Mother Geneviève-Marie Fontaine, Monastic Commissary for our Sisters of Assomption, spent a few nights with us before taking up her responsibilities as superior in Rogersville.  She brought with her some of the products of her Echourgnac community in France for us to sample: cheese, fruit jellies.

Wednesday 19th. We learned recently that Dom Bernard Lefevre, last living member of our defunct motherhouse, Bonnecombe, will turn 100 soon. The news made Brother Leo raise his eyebrows in surprise. He himself will be 96 in three months’ time.

Thursday 20th. Our refectory reading of James Herriot’s The Lord God Made Them All drew to a close, as Herriot encountered a Grandma Clarke, someone who embodied true faith, to his eyes. We then began an audio presentation of C.S. Lewis’ Mere Christianity.

Friday 21st. Dom Innocent posted a new community calendar of upcoming events. November and December will see some monastic visitors here, including one for the first time; diocesan events; our annual retreat. This year’s retreat will be preached by someone from outside of our Order, and it’s the first time for that in a while.

Saturday 22nd. Dom Innocent was looking after our beehive box, with the little bee smoker puffing away.

Sunday 23rd. At Vigils, we’ve finished up a long series of readings from Ecclesiasticus / The Wisdom of Ben Sira, a book of the Bible which Brother Leo takes particular delight in.

Monday 24th. Some nice, blue coffee mugs are now on sale alongside the other pottery in our little store. 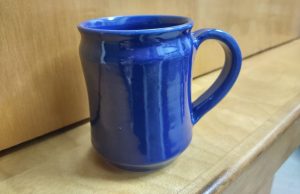 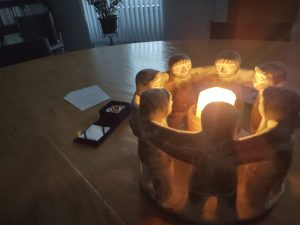 Tuesday 25th. In Chapter, with candle lit, we stood and prayed  the Blessed Martyrs of Algeria. On the table was our newly-received relic of them, soon to be placed in our reliquary. The prayer mentions by name our brothers of Atlas, along with the fellow-saints who made the same gift they did in Algeria.

Thursday 27th. A small excavator was parked on the lawn near the lake, and work got underway, on the underground water line connecting our main well, to a second well, as backup if we need it. It was successfully repaired in good time, and the workers seemed to admire our lake.

Friday 28th. In refectory, we listened to the Order’s synthesis of the recent General Chapter. It is the first time we’ve used text to voice technology, and the computerized voice did not too bad at all. The brief document is impressive, in terms of its ability to sum up so much, and offer keys of interpretation, as to what this moment in our Order’s history is saying to us.

Saturday 29th. We learned of the passing of our friend Brother George Alan Lord of Mount Saint Bernard Abbey, one of the few monks remaining who (like Brother Leo) originally entered as lay brothers.

Sunday 30th. Brother Leo was admiring the lifestyle of the geese on our lake, placidly floating along, as they wait for the moment to fly south.

Monday, 31st. ‘Mere Christianity’ is the first C.S. Lewis book we have listened to in refectory, it as well the first book consisting of Christian apologetics; a different angle on things. Lewis seems to have been called to that field, judging from the way he proceeds, with discretion and delight.