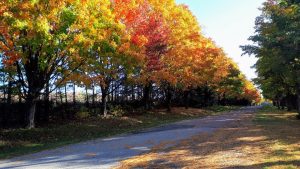 Our drive in autumn splendour

Thursday 1st. Bede is busy enough, in terms of addressing requests for retreat bookings, within the parameters of restricted numbers. Happily, the guest house remains relaxed and prayerful.

Friday 2nd. It is oddly consoling to spend a few minutes back in 2008, thanks to Michelle Obama’s book, and its account of the run-up to Barrack Obama’s first presidential victory.

Saturday 3rd. Our cats surprised Brother Leo, by peering through the basement window at him in our refectory. Outside, blue jays have become more numerous here. In the area out fro 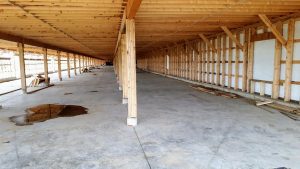 Inside the new chicken barn

nt, a few families were by this week to use the locale for photos.

Sunday 4th. Several people were by to purchase apples, some picking the apples themselves. The week saw the north side of the poultry barn closed in, while Steve worked on transforming the former milking parlor into a conventional work-space.

Monday 5th. From a distance, construction workers were visible along the south side of the new poultry barn. On the far side of the barn, a cement pad for an eventual silo is now in place. Geese began practicing their fall run today, in air a bit cooler, finishing the exercise by quietly floating on the lake.

Tuesday 6th. Brother Henry had an early start from his care home in Dieppe today, to see one of his doctors. He seems to make friends easily on these excursions, today’s taking a bit longer. All is well. Dom Innocent made his way to Saint John, New Brunswick, south-west of here today, to help out at the annual Priests’ retreat day for that diocese.

Wednesday 7th. Faces not seen here in a while have happily re-appeared, including those of my parents.

Thursday 8th. Brother Stephan has been seeing to some carpentry work indoors. We have resumed readings from the Roman Martyrology after the principal reading at lunch.

Friday 9th. As the guesthouse emptied for the long weekend, news on the Covid situation in the Province continued to grow slightly more somber, as it had yesterday. Before supper, Dom Innocent spoke   briefly about this, in terms of possible consequences for how we will  organize things.

Saturday 10th. Brother Stephan was practising the organ in the Chapel this morning. At the door of the guesthouse, a sign now asks visitors entering the building to wear a face mask.

Sunday 11th. As usual, we were five for Vigils this morning, Sunday Vigils including an extra canticle, a Te Deum, the Gospel, and a blessing, along with other, smaller elements. A liturgical moment which stands out from all others. 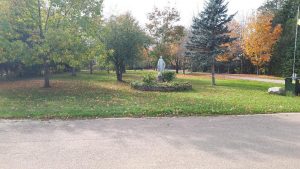 Monday 12th. As Rogersville cools down, we close up some doors, and draw the curtain over the Chapel’s closed big, red doors. A late arrival for this season was out picking some apples for herself today, wearing a light parka and a smile.

Tuesday 13th. We had an interesting Chapter today, with a good look at many aspects of our life, including projects completed or underway. We also heard a bit about the Coptic Orthodox monks who will now be making use of the former Trappist monastery of Prairies. Dom Innocent asked for our suggestions as to how to arrange this year’s retreat. Later in the morning, as we were praying before lunch, we could hear the gentle sound of hydro-seeding outside, to make up for the lawn lost building the wastewater treatment system.

Wednesday 14th. Abundant rain fell on the fresh hydroseed. The next step, post-completion, will be the company redoing the bit of paving where they dug through the drive, this should be soon.

Thursday 15th.The oak tree in front of the monastery has been holding on to its leaves, yellow, orange and a touch of green, longer than others. 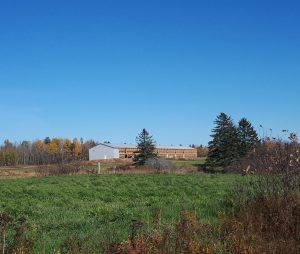 Friday 16th. Dom Innocent continues to use the ATV to visit the poultry barn construction site, north-east of the monastery. This week saw the completion of the roofing. High winds had at times prevented scheduled work on this, earlier on in the construction.

Saturday 17th. Once again, Father Roger prepared us some nice meals, with an omelette at supper, and onion rings and potatoes.

Sunday 18th. Yesterday we had another rain, whose sound was sweet, and although the show of colors has now subsided, the view remains lovely.

Monday 19th. The pruning all around the Statue of Mary has revealed a little metal label, which notes how the statue was given to us: “DON DES FRÈRES DES ÉCOLES CHRÉTIENNES DE MONTRÉAL 1993.”  (Gift of the Brothers of the Christian Schools of Montreal 1993)

Tuesday 20th. At Mass, one retreatant alone joined us. In Chapter, Dom Innocent commented the Rule of Benedict on the clothing of monks, in the light of communal living. Dom Innocent mentioned that he was interested in themes to reflect on during our self-guided retreat, and asked again if there were any suggestions. Retreat time is usually a time for refocusing, reviewing, rediscovering our life, and so ideas or texts to take on for the week, could help replace having an invited retreat master.

Wednesday 21st. It is exciting to see the last open side of the poultry barn changing, closing in. The robins were working the front lawn again today, among the leaves. Some work is still ongoing on the site of the former dairy barn, where some traces remain, for example the buttressing which had been added to prevent the barn from leaning over.

Thursday 22nd We had something new with supper: mashed potato muffins. Dom Innocent posted a schedule for the retreat, and it will draw on our own resources, in the sense that the different Priests will each give a homily/conference in the course of the week.

Friday 23rd. We heard for the first time today of an Orthodox monastic presence in Nova Scotia: The Hermitage of the Annunciation.

Saturday 24th. Brother Stephan has been working on repairing our commercial dish washer. One of the buttons, “fill”, no longer has its effect. Today he was moving needed equipment to the poultry barn site.

Sunday 25th. At lunch, we listened to Murray Perahia’s rendition of Bach’s French Suites. A small group was on hand for Mass. Though the current world situation has been ongoing for a while, long since having changed the look of things, one has the feeling we are into something new, on an ongoing basis, month to month. It was nice to see the joy of people at Mass, today. 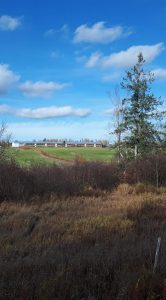 Monday 26th. Some first few flakes of snow fell today. But they did not last.

Tuesday 27th. Brother Stephan got the commercial dishwasher running again by taking an electrical coil from dairy equipment we no longer use, and installing it in the washer. In Chapter, Dom Innocent  took some time to update us on various dossiers. The wrap-up for the construction is not at hand, but is not far. Post-water treatment system work, he was hoping that the paving crew would arrive soon; otherwise plowing snow from an uneven cloister entrance road will be tricky, soon.

Wednesday 28th. Father Roger co-ordinated the end of another production cycle for poultry, using the two poultry barns soon to be decommissioned, one of them a three-story barn. The paving crew did arrive today. As they were getting set to begin, a few of them walked over to admire the lake. Soon enough, the drive was refinished.

Thursday 29th. Before dawn this morning, Stephan was fuelling up the cars, and in the distance, construction workers had begun arriving. Michelle Obama’s book will be put on pause for refectory reading during our retreat, as Brothers take turns choosing spiritual music instead. Presently, Michelle is taking us through to the final stages before the last, 2016 US Presidential election.

Friday 30th. A gentleman managed to gather two sacks of apples from the trees, though the season seemed to be about over. Brother Stephan washed off the exterior of the tractor.

Saturday 31st. Father Bede replaced the wick on the Sanctuary Lamp. He received some new wicks recently, straight from Greece.