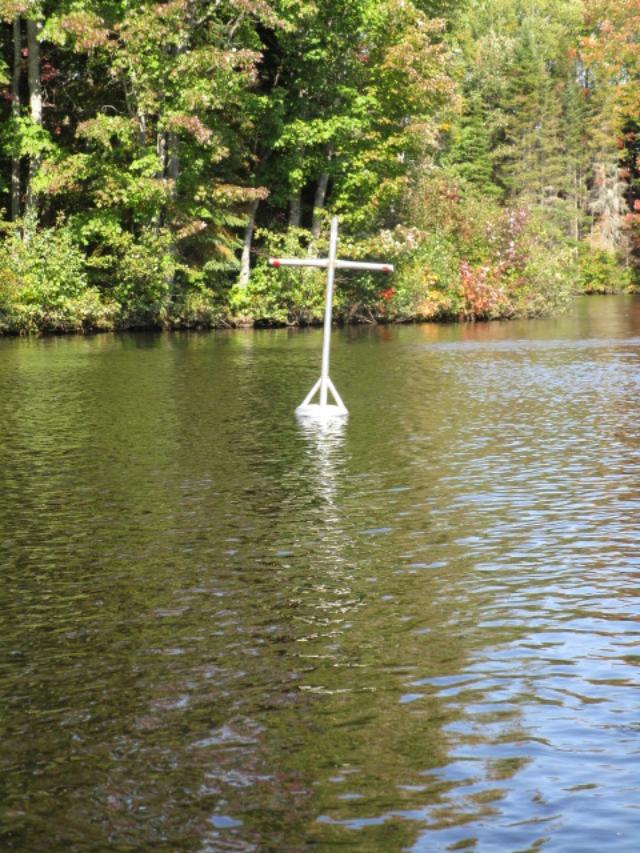 etreat in the north of the province today. Our mail lady recounted her successful moose hunt this morning, as she left our mail. Hunting is part of life still, around here; and family life, at that. Students and faculty, and even some family of faculty from the Emmanuel Baptist Bible Institute were by for an introductory tour of the monastery today. Soon, they will be covering the golden age of monasticism in their history class. The institute is organised to allow students to earn a degree for ministry, while holding down a regular job.

Wednesday 2nd. The greenhouse is being cleaned out at the end of a season.  Brother Henry saw a specialist today at the Georges Dumont Hospital in Moncton. Professionalism and informality go hand in hand for the young health professionals of Acadie, to the patients’ good. I described to Henry’s doctor the imminent juice-making operation here, with the down-home set up for making juice. He said this sounded good: medical seal of approval.

Thursday 3rd. With our new Honda in the garage, we set about making juice this morning. The apples look good this year.  This afternoon, bottle after bottle of juice was put in freezers. 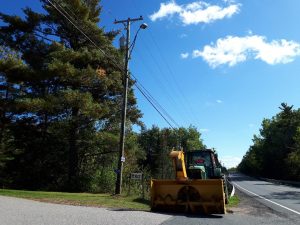 Friday 4th. Brother Léo finds the painting of Saint Thérèse de Lisieux that serves as the cover of this month’s Prions en Église a bit off the mark. Léo is currently re-reading a biography of Thérèse’s sister Céline and quite enjoying it, surprised anew at how difficult Céline’s life was.

Saturday 5th. With the Parish Priest away, I assisted at a burial this morning in Rogersville. It has been decided that we’ll sell the tractor with snow blower at auction, rather than privately. Soon, the auctioneers will arrive to transport the merchandise to their auction facilities. Around the former dairy barn, a road which formerly saw regular traffic of many kinds is quiet, and beginning to grow over a bit with clover and faint patches of grass.

Sunday 6th. The u-pick of apples is ongoing. With a bit of sunshine this morning, two-tone caterpillars were making their way across the warm driveway pave, along with a nice, big spider. 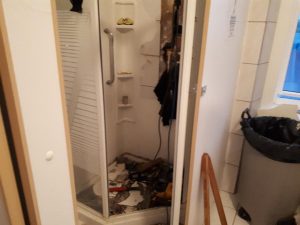 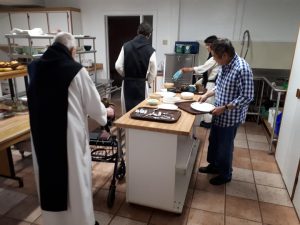 Monday 7th. Our one-month visitor for monastic immersion is a plumber, and today he set about re-doing parts of a shower, which, like others here, can suddenly switch from hot to colder water. He had to break through the stone wall behind the shower pipe, just a bit, and saw, behind the familiar soft- brown stone, coal clinkers used as construction material in the 1920’s.

Tuesday 8th. In Chapter, Dom Innocent decided to resume at some point the reading of our Constitutions at lunch, as postlude to books. Currently, we are hearing read after the main reading the next day’s Roman Martyrology entry, as translated by Father Bede from Latin and Italian.

Wednesday 9th. Our visitor is now tackling a bath tub long unused at the opposite end of the corridor. The room adjoining where the tub is, is an infirmary bedroom in theory, storage (of sorts) in fact, and this week, it began to be cleared out. In the 1990’s, the room also served as a study hall for monks preparing for final vows, and eventual Ordination. Because they found winters indoors studying long, they decorated the room with a nature wallpaper mural, still there. Selective cutting of our trees is ongoing, and right now the machine is in the woods just north of the monastery. Now and then we see lights or the machine itself through the tree line, which will be left intact. 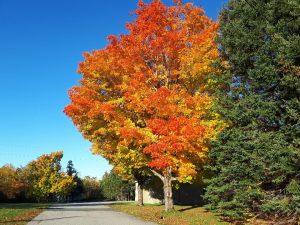 Thursday 10th. The leaves have been taking their time turning color and falling; a dazzling, and dazzlingly quiet time of year.

Friday 11th. A new refectory book has begun, this one is  ‘Clementine: The Life of Mrs. Winston Churchill’, and it started off with an assured tone. The last book, ‘First World Flight’, ended with a brilliant sketch of aviation in the United States in the decades following the early aviation period.

Saturday 12th. A second person arrived for a month’s monastic immersion. He is from the United States, and joined right in. To have one more person at Vigils, and on, is quite something, given our small number.

Sunday 13th. At lunch, we listened to Gospel music by Alison Krauss with the Cox Family.

Monday 14th. Brother Léo’s family were up from Memramcook to visit, and to share a joyful lunch with him.

Tuesday 15th. Dom Innocent went to Campbellton this morning for the regular meeting of Bishops and Major Superiors. The building was right on the shore of the Restigouche River, kind of nice. In Chapter this morning, discussions included the future of unused buildings here; fire alarm system; emergency controls for elevator. The two men on the immersion program have been picking many crates of apples. Their new perspective on things is certainly a gift for us. One of the fellows is familiar with monasteries one only imagines, and this makes for interesting discussion.

Wednesday 16th. In our scriptorium, Brother Stephan took a few moments to read the chronicle of the Abbot General’s voyages. The latest installment is USA, where Steve is originally from. The Abbot General was last here in New Brunswick in 2013.

Thursday 17th. Wind and rain storm today. Brother Leo got a new fall and winter jacket this week. The one he had previously used was given away to a poor person passing by. A few years ago, he had traded a third jacket to a passerby, for the poorer one he had recently been using.

Friday 18th. The big tree next to the former dairy barn was bereft of leaves, and starlings shared perches on its top branches with a crow. Today was Bede’s 55th anniversary of profession. He has a few years on some of us, and maintains a fresh perspective on his calling.

Saturday 19th.  Dom Innocent took the train last evening to Quebec for meetings with monastic superiors at Val Notre Dame. Minus Innocent’s voice, not all Offices sound the same, so we adjust. Today was a quiet and busy day around the house, also in the orchard, with families peacefully walking in and out for apples. 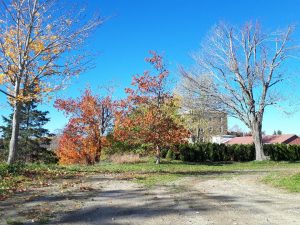 Monday 21. The two fellows on immersion got to help initiate another cycle at the chicken barns, where newborn chicks arrived today. One fellow is completely new to the region, and he finds it friendly and peaceful. He said Atlantic Canadians are nice, period, but Bede felt that this idea needed a little work.

Tuesday 22. During the night, the white lights of the tree harvester are visible through the trees, but not the machine itself, the whole process having become more elegant than in decades past. Work on the monastery drainage pipes floor to floor got more serious still today, it is a chance to learn about advances in plumbing, also offering glimpses of how the original building construction took place.

Wednesday 23rd. Brother Stephan is the prior, which means that he is in charge while the superior is away. Often it seems that when the superior is away, curious situations arise, for Steve to handle. This time around, racoons and seafood enthusiasts required his attention. He has been prior here for 28 years, under three different superiors. Once, he did a stint of 4 months at the helm during a sabbatical/rest of Dom Maurice Guimond. I asked him what being on the spot is like and he said having to replace superiors during their absences is like being a spare wheel on a car: have to be there in waiting, always ready to help keep the ‘vehicle’ rolling.

Thursday 24th. Clearing away apples fallen on the ground took up part of the day, then Brother Glic mowed and mulched leaves on the lawn.

Friday 25th. Father Stephen Verbest arrived from the monastery in Iowa, ready to preach our annual retreat. His last visit to Canada was by bush plane from the States as a teenager in the 1950’s, to fish. He says the only time he enjoyed eating fish, was those fish they caught. This evening we had a festive meal with him, including oysters and shrimp, plus non-seafood choices.

Saturday 26th. Our in-house friend from Oklahoma got away by train last evening, and today Dom Innocent returned by train, happy with the meetings in Quebec.

Sunday 27th. Unusually, we had Chapter this morning, Innocent urging us to be open to the grace of retreat time. This afternoon Father Stephen opened the retreat with a first conference. The retreat will focus on the thought that monks form a community of sinners. 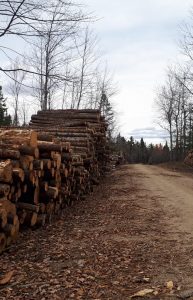 Monday 28th. A lone skunk was rooting around the front lawn, before dawn; not the best day in the skunk’s life, I would say, but I could be wrong.

Tuesday 29th. A friend of ours died recently, formerly a political figure. In the news and in real life two different people, to a degree; guess it is the same on some level for all of us, even if we don’t make the Acadie Nouvelle. Brother Stephan reported that a monastic calendar hanging near the car keys has days and dates which do not match actual October 2019. After yesterday’s conference on pride and anger, today’s conference was on lust and stubbornness.

Wednesday 30th. Brother Leo got out for a medical appointment in Miramichi. Things look hopeful for a quieter and better winter for him this year, health-wise. This morning’s conference was on sloth and hypocrisy, as they can connect in monastic life, or any life. Along with true stories from Father Stephen’s monastic world, there have been Charlie Brown references, Flannery O’Connor references, even a lawyer joke!

Thursday 31st. This year’s retreat varies the schedule from day to day, offering space some days for lectio and personal reflection in place of a conference. There was an impressive wind this evening, with loss of power, felled trees, and need for our generator for several hours. The Chapel in particular really lets the sound of the wind through. 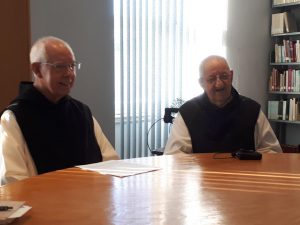 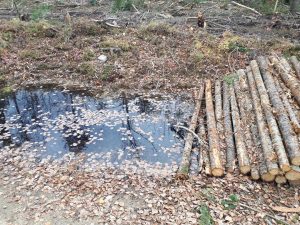