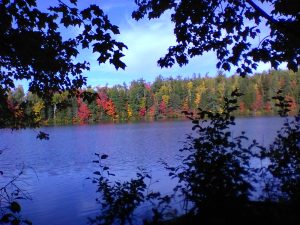 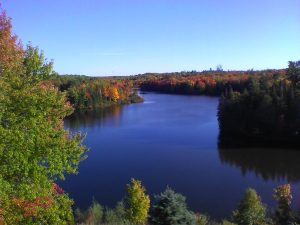 Monday1st. We sang page 202 for Sainte Therese of Lisieux, at Lauds. The words, are by an anonymous monk in French-speaking Europe; the music is by someone here, one of us, and after we finished singing it I thought, that’s incredible, that music came from here. It’s perfect.

Tuesday 2nd. In Chapter, Dom Innocent continued to comment on the Rule of Saint Benedict on humility. No matter how many times one hears the steps of humility read aloud then commented, it can take your breath away, what God offers. Outside, the tall tree between the cemetery and the big barn is just beginning to change color for autumn. It is one of the most ‘hard-luck’ trees in terms of its condition/viability and also one of the most beautiful, if not the most beautiful.

Wednesday 3rd.  Next to the barrier gate on the driveway, is an inconspicuous metal door for pedestrians. It looks almost like part of the gate. Today it was swinging open and closed now and then, highlighting the silence. One robin sang once. Father Innocent went to the Sisters today, to help 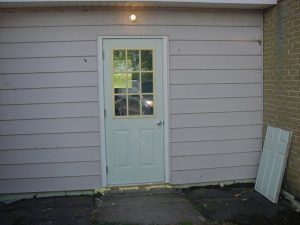 Thursday 4th. Bede finds the autumn display of colors a bit disappointing this year, his fifteenth in Canada. In the Miramichi, we bumped into a Mass-goer today, who had many good things to tell us. A few times this afternoon, the train’s whistle blew. Our cook Maurice is preparing a cheesecake for Brother Stephan’s birthday tomorrow. Sometimes, the birthday cake is the monk’s request, their favourite, and it is this time.

Friday 5th. An artist guest is here, he loves the Offices, he also likes to do a little cleaning in the guest house while he’s here. Brother Glic was wondering how cool it was outside, as he went to pick apples this morning. Well above zero, but the wind made it much cooler, he found. This afternoon he was giving the back lawn a last cut for the season.

Saturday 6th. This afternoon the geese were quietly floating on the lake. But this time out, they are floating all in a line perpendicular to the lake’s coast, which juts in and out.

Sunday 7th. Bede presided Mass at the Sisters, but took in a good part of Mass here first. A retreatant set out for Moncton, then home to Ontario. Some folks were by to take pictures outside; over the last few days some took portraits of their children, some took grad photos, some just wanted pictures of the trees.

Monday 8th. My family were here for my birthday today. The statistics for our website have been made available to us from our service provider. These include, ranking of countries according to percentage of traffic. The USA visits our site most, then Canada, then Russia, then China.

Tuesday 9th. Stephan drove the old blue dump truck to Moncton to have the windshield replaced but arrived in Moncton only to discover they’d brought in the wrong windshield for it. So back he came.  A guest is here from one of the lovelier areas of Nova Scotia: Parrsboro.

Wednesday 10th. Father Roger along with Lucien wended the way to Nova Scotia, for a tour of agricultural facilities there. This took the day, and even a bit of the night. They had lunch at a restaurant called ‘Snappers’. Apparently they’ve got snapping turtles somewhere outside the restaurant.

Thursday 11th. A nice couple from PEI have brought us organic potatoes, and other gifts. The long-suffering geothermal team were back earlier in the week, but not today. Our rooms are nice and warm. But it seems there’s still some more fine-tuning to do. 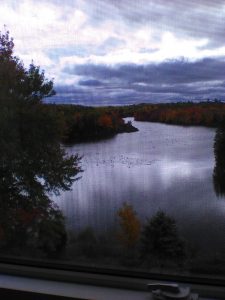 Geese on the Lake

Friday 12th. The geese don’t seem near-ready to migrate yet. But sometimes, they actually work on it at night, honking away, in a manner that is both urgent and laid-back.  The dump truck is parked facing the light over the repair shop door for the night. It looks good in blue.

Saturday 13th. Upon publication, the new Roman Missal didn’t win rave reviews as regards some of its translation choices, and this even from the most judicious or kind. With time, I find striking how the Common of the Blessed Virgin Mary has wonderfully-rendered prayers; maybe a step up from the preceding Missal. The prayers really reach up to God. With soft light this morning, the trees on the south horizon were a bit reminiscent of the area around the Gianicolo hill in Rome. The trees here can’t get very tall because of the high water table. A few, scattered trees reach way up. 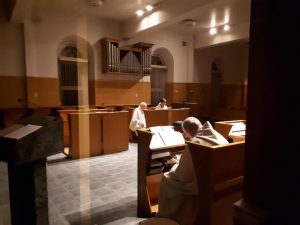 Sunday 14th. The geo-thermal system sprang a glycol leak today; and the walk-in freezer, now approaching urban legend status, once again malfunctioned. The fellows were by to work on it, with success. They are Jetstream trailer enthusiasts, that was quite a sight.

Monday 15th. This morning, Father Innocent set out for the monastery of Saint Benoît du Lac for the first time. He and Mother Alfreda will be joining other Canadian superiors there for meetings; after that, Innocent will make a brief visit to our mother-house, Mistassini. A Parish Priest from Moncton is here for a retreat, it has been many years since he has been able to stop by.

Tuesday 16th. Five robins were on the lawn next to the lake this afternoon. They seemed lost, or disoriented. The internet was down today, and this lasted quite a while. Did the wind affect a tower some place?

Wednesday 17th. In his pottery shop, Father Innocent has made some funeral urns for sale, a special order. Bobby the technician was here today to resolve a technical difficulty with playing the audio books in refectory.  We had been taking a break from books in refectory, necessarily, and during that time Father Bede played us Vivaldi on You Tube.

Thursday 18th. Father Bede has left out prototype Christmas cards for this year, to see what we think. This year’s card features a return to the model of photos of individual monks within lunettes. Brother Léo the doorkeeper announced to the cook that a family of three would be stopping by for their first retreat here. It was a happy thought for him; percentage-wise, it seems there are more first-time retreatants, year by year. On the horizon, a line of geese was flying today. They were moving along smartly. They were honking, but it was so faint that if you hadn’t spotted them, you might not notice the sound.

Friday 19th. Our late Father Adrien’s doctor was speaking out in today’s paper as regards legal marijuana. He said there is a risk of banalisation with the new status quo.

Saturday 20th. Our truck—a 2004 Ford–has gotten engine trouble. Happily, with the Kia still a Province away, we also have the farm pick-up on hand.

Sunday 21st.  Father Bede’s bicycle suffered a flat tire just as he returned from an expedition to Collette. He has gotten good use out of this m 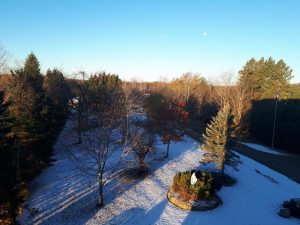 ountain bike, purchased during his first year here. This evening, three eagles were over the lake together. However, with the evening light of late October, they are less discernible. One eagle is on its exact same perch / branch, and looks straight ahead, away from us. It is a good feeling to see them together.

Monday 22nd. Some guests sent in yet another depiction of Brother Leo. This time it was a chalk drawing on their chalk board at home 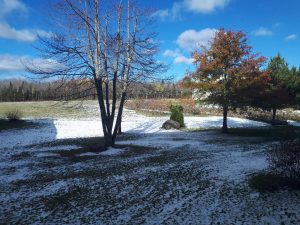 . They enjoyed their retreat here last week to the point that, they wanted to be back here today. The lake was very still this cool morning; rare were the ripples, as though the water were saying “think I’ll freeze over soon.” Father Innocent got back from Quebec in time for midday prayers and lunch today.

Tuesday 23rd. In Chapter this morning, Father Innocent gave us a run-down of his travels. All went well. It was, along with other communities visited, his first visit to Mistassini in nine years. He was impressed with the magnitude of their chocolate production these days. He brought some chocolate back for us.

Wednesday 24th. Full moon tonight. In Dieppe today, Brother Henry was taking in TCM films. We talked about Robert Louis Stevenson, early film, changes in people’s lives. I told him we’d have the visit of a member of the Order from the Netherlands here in a week’s time.

Thursday 25th. There are no guests in the guesthouse, and this morning there was no one attending Mass here except the monks. Our surroundings look different then, the small chapel, the light from the candles. This evening, Father Innocent attended the regular Chamber of Commerce meeting in town. A touch of snow was enough to displease some neighbours today, must be a long winter for them.

Friday 26th. A guest arrived by plane then train, luckily the train station is only a few minutes from here. The arrival of the train is an impressive sound and sight still in 2018. And when a door opens, a Montrealer, or one who has the air of one, smiles and helps the passenger off. 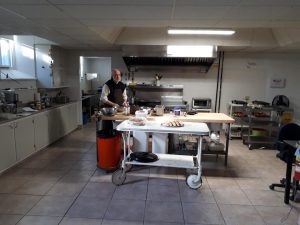 Saturday 27th. Father Roger is on weekend cooking detail. In refectory, we are listening to Jimmy Carter’s short book ‘Faith’, written last year, when Carter was 93, read by the author.

Sunday 28th. Yesterday, two little water fowl were sitting on the ice of the newly-frozen lake, so glaringly smooth in the morning light, it was hard to say if the birds were floating or sitting. Today was sleepy and sleety, with, in the evening, flies outside.

Monday 29th. Brother Glic has been repainting the John Deere tractor, bright and shiny. The geothermal system is producing less heat, somehow. A bit of water from outside was leaking into the basement today. Monks looked, then Lea, our eagle-eyed cleaning lady found the spot where the water was coming in.

Tuesday 30th. In procession from Chapel to Chapter this morning, it was almost completely dark in the scriptorium. Some monks like having night lights on when it’s dark out; others prefer lighting as subdued as possible. In Chapter, Father Innocent asked us to have a look at the  document ‘Portrait of an Ideal Monk’, which his predecessor drew up and periodically revised; it gives a newcomer an idea of what to aim for and serves as a rough guide to the rest of us. The reason for digging it out is that an aspirant will be joining us for a month, in a few days.

Wednesday 31st.  To judge from the reservation book, the guest house will be a bit more active in the weeks ahead. Two suites, we have, and these rooms are much more in demand than they once were. The other guests’ rooms are similar to dorm rooms. Father Innocent made his way to Moncton today to pick up our 2018 retreat master, Mother Benedict Thissen, who served as Abbess of Arnhem, in the Netherlands, from 1994 to 2014.