Sunday 1st. This morning, sunlight was touching the scaffolding on the south, front side of the future repair shop. Pigeons and starlings can be seen there sometimes, other times no. Crows and pigeons seem to be more numerous now that the barn swallows have more or less disappeared.

Our procession leaving Mass this morning was a bit more peppy, with Father Léopold Leblanc present, as well as an aspirant, arrived yesterday for a month, happy news. He is staying in the room which once belonged to Father Adrien.

Monday 2nd. A group of African Priests serving Parishes in Canada has arrived for a stay. A nice group.

Brother Glic managed to get his photos done and his Passport Renewal Application accepted this morning, in the Miramichi.

Glic gathered some apples so Nurse Maxine at the clinic can distribute them to minor hockey players in town. Her goal is to encourage healthy eating habits. The first set of apples he collected and stored disappeared, so he went back and picked another set.

Tuesday 3rd. In Dieppe, Brother Henry has done a bit of house-keeping, sending back to the monastery things he no longer needs or wants.

Wednesday 4th. Father Innocent has brought in a little trailer load of pumpkins from his garden.

Thursday 5th. On the third floor, a little cache of equipment awaits John’s return, probably this weekend. John has been re-attaching plain, white ceiling tiles which had begun fallen from the ceiling one by one, using a portable compressor to power an air stapler.

Friday 6th. The first calving of October took place. It was a small but peppy bull, whose brash mooing, surprisingly loud, did not add to everyone’s day.  With Cortlands and McIntoshes weighing down some branches, Father Clovis has decided this Monday will be the moment to begin an apple U-Pick. Up to now, folks have been buying $5 bags of apples, and lots of them.

With time the sight of the new repair shop becomes more familiar, its colors fitting in with the soft grey of the surrounding buildings. It will be interesting to see how they install the door; the entry is unusually high to allow passage of tractors.

Saturday 7th. Visitors from Gaspésie have arrived for a stay. Three and a half hour drive, they say. Dom Bede arrived at Mount Saint Bernard Abbey in England today. To judge from the forecast, weather over there will be cloudy, eternally. Mount Saint Bernard is the monastery Bede originally entered, and today was the 55th anniversary of his receiving the monastic habit there.

Sunday 8th.  Father Clovis was working around the apple juice making facility this afternoon, getting things ready for this year’s production.

For lunch there was a visitor all the way from Waltham, Massachusetts. Father Roger cooked for us and the guests this weekend, making for satisfied palettes all around. Someone even tossed a few lobster our way, which helped satisfy some, depending on how they feel about biting into crustaceans.

Monday 9th. With day after day of total humidity, wood begins to creak, and the benches, the stalls we occupy in choir are creaking more than us, for sure.

Thanksgiving Day offered soft sunlight in the morning, and visitors were enchanted by the walk out front, the trees.

Tuesday 10th. Father Innocent spoke to us of the conference he gave to the Priests from across Canada assembled here last week. He spoke to them of the Holy Spirit, and of Mercy. Parish priests are also leaders so Innocent also spoke about that and how leadership styles, each distinctive, come out in everyday life.

Wednesday 11th. Apple juice is getting made. Corn is being harvested. With a tinge of frost brightening metal roofs in the morning, work has been stepping up on the new repair shop. The owner of the construction company has been around, with his hard hat on: a nice, big fellow.

Thursday 12th. A few hours before sunset, it was warm and bright outside. One of Clovis’ friends walked slowly through the apple orchard back to the guesthouse, gazing at the trees. This year, there will be one pressing of juice only, it turns out.

Friday 13th. Father Clovis has gone North for a bit, near home. He is from Poksudie, which is both an island and a village. The Road onto the island is called ‘Chemin Mystérieux’; I’ve known local folk to head up there just to see this place they’d not heard of previously, and which is said to be distinctive. They were not disappointed. (Pokemouche, a similar-sounding place, people do know about.)

Father Roger had to go to Moncton for a chicken producers’ meeting today.

Saturday 14th. This morning the sky was dark grey, very dark. Through the window you heard wind in place of birds: the time of year some monks find best for this way of life, is at our door.

A tin of Quality Street chocolates materialised last week. Now, the worst is over for those chocolates. As has been for ever, certain flavors are all that’s let over, in modest abundance : those too sweet; and toffees. I decided to try these and let you know what I thought. Orange Cream: trying one for the first time in decades, I found it better than I remembered. More chocolatey. On to the Toffee Penny: quite good. Could it be that in this fast-paced age people just don’t have the time, for Toffee?

Sunday 15th. The shop has now been done up with the same siding inside as out.

As though to beckon back our Good Ol’ Abbot (two days more), we had ‘Cajun and country music at lunch, and a beautiful Gospel Song, “Just A Closer Walk With Thee”.

Monday 16th. One of our cooks is on her last week here, before trying something new. It is a moment that gives pause: a decade and a half passes quickly; we are blessed with fine people around us.

A friend left several 50-pound bags of potatoes for us as a gift, at the front door. He was about to leave when Father Roger saw him and said hello…this time: in the past, we could never figure out where the potatoes were coming from.

Wednesday 18th. The repair-shop door is in place and it’s nice. It even has windows. It was installed one section at a time, and will roll open using a chain. I asked Alphonse what sort of heating there would be in the shop and he said he thought it would be propane.

Dom Bede returned to us today, so now we no longer have to answer the question, “When’s Bede coming back?” All seems to have gone well on his travels, though in London some were complaining it was too warm.

Thursday 19th. In the kitchen, there are yet more boxes of this year’s tomatoes. A lovely red. On the farm, a cow has been bellowing from time to time, for no apparent reason, a very loud cry. Most often, we never hear a ‘moo’ from our cows.

Friday 20th. In Chapter, Dom Bede gave a first presentation of the recent General Chapter in Assisi. This, 2017 chapter was a success, it seems. More than is usually the case, practical solutions were found to specific problems around the world. Sensitivity and dialogue between the superiors were at a high level. Soon, we will look at the Chapter’s resumes of house reports which Bede brought back, and handed out to us, in a little dossier.

It was a poignant goodbye to Linda as we shared with her the final lunch she’ll prepare for us. She was smiling. Joline, whom Linda has been training in the kitchen, also joined in. Linda was able to share on her iPad a brief video of sunrise over the water at her home in Cap Lumière.

Saturday 21st. Our aspirant has been taking advantage of the scriptorium for reading and reflection. The scriptorium is long, relatively narrow with huge windows, nice chairs alongside them. Brother Léo can be seen there at more or less the same times each day. 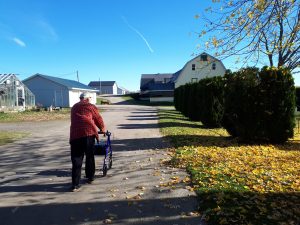 Brother Henry going to visit the new garage (the building on top of the hill).

Sunday 22nd. Brother Henry joined us today, and was able to get out and see the new repair shop, close to completion. He wanted to visit the cemetery to pray, but the grass there was wet yet again, this time from the morning frost. Henry travels in sandals, year round.

Monday 23rd. With the high humidity outside, some florescent lights don’t want to switch on.

The woman we hear reading Mary Beard’s Book on Rome for us on the computer in the refectory is good, but the unusual mix of erudition and humility which comes out in Beard’s own speaking voice is impossible to mimic. Carry On Historian!

Tuesday 24th. It seems from a first glance at the General Chapter documents that the fragility of many communities in our Order is causing less anxiety now than it did just three years ago. Also, acceptance of difficult situations is making it possible to find ways forward. The General Chapter always provides food for thought as to life’s possibilities, more or less apparent in the daily grind.

Wednesday 25th. The geese are sitting out a spell of weather too mild to trigger immediate preparation for their annual migration. The southern-style (for us) conditions have also meant hauntingly beautiful evenings and early mornings lately.

Thursday 26th. Guests arrived by train from Halifax last night for their first visit. Not unusually, they were the only passengers to disembark at the tiny Rogersville station. ‘New Canadians’ as of four decades or so, they were friendly, and eager to learn about what goes on here.

Friday 27th. Our beautiful pin oak has been holding on to its leaves better than just about any other tree. Our Canadian flag was waving proudly today…and then some: high winds. Bede got out on his bike all the same.

Saturday 28th. Last night I heard some coyotes wail, first time in a while. Each time, their cry seems slightly different from cries I’ve heard before. These coyotes seemed to be slightly south of here.

Sunday 29th. We lost some of our rusticity this week, as the paving crew we’d been waiting on made it by and filled the holes on our driveway. This will make a difference particularly in winter. The long drive (surrounded by trees) leads to the guest house and along front of it, after also branching out to the right, to the pottery studio, grotto and carpentry shop, turning to become the drive onto the farm, along the lake.

Monday 30th. Maurice Gallant, who had been cooking some weekends as well as doing all kinds of work on the grounds, began his first regular shift as cook.

Our aspirant left in good cheer, after a good month. His mother was able to spend a few days on retreat here, his last days. Later in the day, the extra stall was slid out of the Chapel, into the scriptorium where it will remain until Father James from Spencer Abbey (Massachusetts) arrives to preach our annual retreat.

Tuesday 31st. In the guesthouse now are some familiar faces: someone from away who has been visiting for decades, once a year or so. And someone who lives near enough by that they can drop in as they wish, but who wants to share all of All Saints with us.