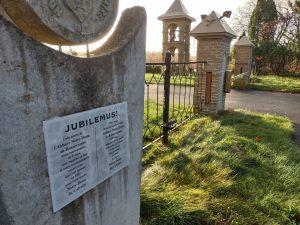 Tuesday 1st. The 120th anniversary of our monastery, a day filled with memories and joy. At lunch, a remarkable meal, we discussed many things, including the waterfalls of Canada: Grand Falls, not too far from here, is the biggest waterfall east of Niagara.

Wednesday 2nd. Having slowed down a bit the last while, Brother Leo has been picking up steam recently, and honing his sense of humor.

Thursday 3rd. Visitation time having arrived, our co-visitors arrived: Mother Eleanor Campion of Glencairn Abbey, Ireland, and Dom Gerard D’Souza, from Genesee Abbey, New York State. Though New York is not that far away, the fact of Calvaire’s being less central than the other Canadian houses, makes it a new face of the region for guests like Dom Gerard.

Friday 4th. Dom Gerard offered a Mass of the Holy Spirit, to initiate this special time of listening, and grace.

Saturday 5th. Outside the mechanical shop, the tractor is now adorned with the big, yellow and red snow-blower, in preparation for yet another season.

Sunday 6th. It is nice to have some extra voices in choir. Unusually mild November weather has meant that the Chapel is unusually free from the sound of the heating units.

Monday 7th. Dom Gerard and Mother Eleanor shared their reflections, fruit of their time here with us. They form a good team,  each embodying the Cistercian spirit in a personal way. This afternoon, they visited our Sisters, and toured our poultry barn.

Tuesday 8th. Dom Gerard and Mother Eleanor got away early, to the relatively tiny Moncton airport. One of our monks sent along greetings with Gerard, to a monk-friend in Genesee Abbey.

Wednesday 9th. Downstairs, we now have a spare circulating pump for the heating system available in the control room, should we need it. From Moncton, Brother Stephan brought in a load of votive candles to sell.

Friday 11th. One of the monks dropped into our lakeside hermitage, which stands empty so often.

Saturday 12th. The Order asked our prayers for Cistercian monks and nuns in Congo, where there has been a resurgence of violence. The tail end of a cyclone reached us, but did not prove severe. The eagle returned to his perch over the lake, and seemed to enjoy the wind. 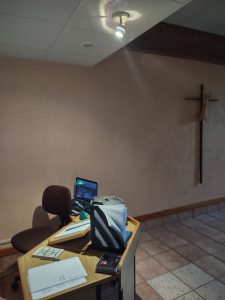 Monday 14th. We had the first snowfall of the year today. The farm pick-up truck’s custom dual-exhaust got a tune-up, and the stacks were puffing out up top, into the cool air.

Tuesday 15th. Today we offered Mass and the principal Offices for the dead of our Order. There were special prayers, referencing  day-to-day monastic life for brothers who went before us.

Wednesday 16th. Brother Leo heard from one of his nieces today, a nice card: he is well-loved, among the Leblancs. Downstairs  this morning, meat pies for Christmas were cooking.

Thursday 17th. For the first time in quite a while we’ve found quality icons to offer in our store, produced at the Greek Orthodox Monastery in Brownsburg-Chatham, Quebec.

Friday 18th. The first bit of ice appeared on the lake recently. Today it froze over completely, and one of the birds waiting to migrate south found its splashdown more of a touchdown. Nonetheless, the birds continue to stand peacefully on the ice.

Saturday 19th. Advance elections were held, to elect our new mayor. She (or he) will be mayor not of Rogersville, but of the municipality which also includes six nearby villages, called Nouvelle-Arcadie. The name ‘Arcadia’ had been chosen for another, new municipal entity south of here, hence a ‘new’ Arcadie was deemed necessary. 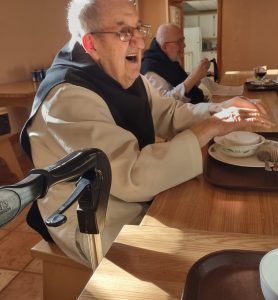 Sunday 20th. For the first time in years, the geo-thermal heating had major problems this morning, which were still being worked on after sunset. A nice spaghetti casserole for supper helped warm  things up.

Monday 21st. Work continued today on the geothermal heating system, with success in the afternoon.

Tuesday 22nd. Dom Innocent continued Chapter talks today on the long (and beautiful) Chapter Four of the Rule of Saint Benedict, which is a catalogue of good works: the monk’s spiritual tool box.

Wednesday 23rd. Our new mayor will be either a Robichaud or a Bourque. Monks are free to vote, but not obliged to. The house has gotten warmer each day, and now we are back to the heating quality we had, or perhaps a bit better.

Thursday 24th. C.S. Lewis’ Mere Christianity drew to a well-written end, as refectory book. One of our monks of yesteryear loved apologetics, as a genre, and so we have a variety of such books around; but Lewis’ seems to be in a class off its own, in terms of the love and informed openness Lewis leaves behind on the page.

Friday 25th. The monks each received an early Christmas gift of chocolates.

Saturday 26th. Our guesthouse got a good cleaning, in preparation for the next round of guests.

Sunday 27th. Friends gave us some poinsettias for use in the Chapel, Christmas Eve.