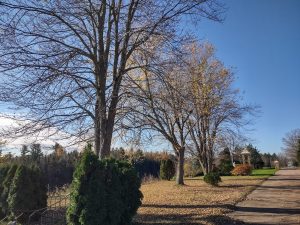 Monday 1st. At All Saints Mass offertory, Brother Stephan played Leonard Cohen’s Alleluia on the organ. As Stephan observed at lunch, this day next year, the community will be celebrating its 120th anniversary. Nothing is planned yet for marking the milestone. When we turned a hundred, the year was peppered with special events, including the international publication of our history, Il est heureux que nous soyons ici, and an amical visit from the Consul General of France in the Atlantic Provinces, and his family.

Tuesday 2nd. The annual Mass for All the Faithful Departed brings us closer in prayer to those who join us here. Dom Innocent gave Chapter today preparatory to his trip to see family, later this week. A plumber friend of ours today removed some washroom plumbing items which have seen better days.

Wednesday 3rd. Our apple U-pick closed for the year, and the apple road sign was taken down. Our two-story poultry barn has been topped up for heating during the winter. Father Bede is working on the production of concelebrants’ booklets to go with the new French language Missal.

Thursday 4th. A friend gave us some apple pies she made with our apples.

Friday 5th. As we left Mass, some cats were waiting outside the kitchen door for breakfast. It is the moment of the day when these wary hunters seem a bit more relaxed.

Saturday 6th. Our new refectory audiobook is Empire of the Summer Moon. It recounts the rise and fall of the Comanche empire, quite a turning, and yet another chance to consider the human story.

Sunday 7th. With the internet down just as we sat down for lunch, there was nothing for it, musically, but Flanders and Swann on CD. 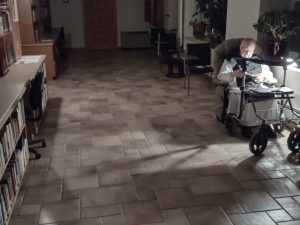 Brotheer Leo in the Scriptorium

Monday 8th. The front door is quiet indeed, Bede is not even moving much honey.

Tuesday 9th. The farmer who rents fields and buildings from us has been busy, at times we hear machines working before dawn, partly I guess because of his extremely abundant hay harvest this year. All sounds good for Dom Innocent’s family time abroad.

Wednesday 10th. Production delays have limited our store’s votive candle supply, but there is light on the horizon. 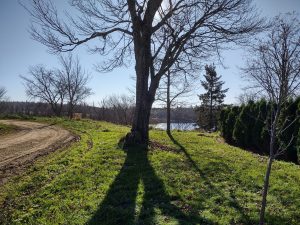 y 11th. Brother Leo and I were remembering the late Arthur Beaudry, monk of Spencer, World War II veteran, who lived many years in our monastery and passed away back in the US, as he was fishing; his favorite pastime. I once asked Arthur if his combat experience played a part in his entering monastic life so soon after the war. He answered, ‘it wasn’t what I saw physically, it was what I saw in the human heart.’

Friday 12th. Father Bede was able to get some cycling in, and have a look around out front.

Saturday 13th. Today, we celebrated All Saints of the Benedictine Family, taking up for Vigils the Canticle from Tobit 13.

Sunday 14th. With temperatures still slightly above normal, a last rose next to the statue of Our Lady facing the guest house, has finally faded.

Monday 15th. Our friendly accountant dropped by. Brother Stephan has been preparing the tractor for another season of snow removal. It has a plow on the front and a big snow-blower on the back. Dom Innocent arrived back in Canada today, safe and sound in Moncton. 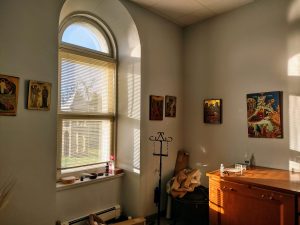 it in one of the monk’s rooms today. Dom Innocent was back at table here for lunch, having managed to fit his voyage home in in just under two weeks.

Wednesday 17th. The community calendar is now all quiet for a while. The next big moment would be the General Chapter for Superiors in Assisi, September 1, 2022. Our cook served up some nice onion soup with lunch. A visitor arrived by train this evening; Rogersville’s new train station café seems to be appreciated by travellers.

Thursday 18th. We had our first snow, soon fading back to mostly green lawns. Winter is one of the seemingly few things that are not really to our elder, Brother Leo’s tastes. We received a gift of various seafoods in a basket today, including cans of chicken haddie. 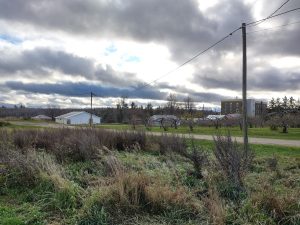 oger has been taking turns making the rounds of the chicken barn in the morning and evening, to see that all is well.

Saturday 20th. Geese were relaxing on the lake today, with their heads curled onto their backs. One or two familiar faces were able to make it back to visit the monastery, from just outside the province, as NB continues to seek the winning formula for public health.

Sunday 21st. At lunch, we talked of travel, and possible beatifications, and changes in Church life in the province. 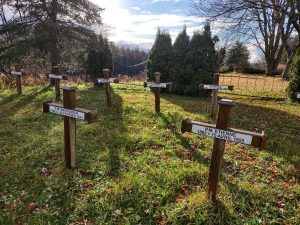 Monday 22nd. Dom Innocent was able to get copies of the newly translated French Missal, days before it comes into service on altars, the first Sunday of Advent, the same day chosen by Paul VI, for the 1970 Missal to come into effect. This week, Innocent will take part in a Rogersville Chamber of Commerce meeting. In general, the town is sensitive to who we are, and interested in how we are doing.

Tuesday 23rd. In Chapter, Dom Innocent spoke on the good zeal which monks are to cultivate, so close to the essence of what we are, or could be; then presented an updated translation of the act of contrition we use at Compline, with wording as it will appear in the new translation for Mass.

Wednesday 24th. Chickens having shipped, the two-story poultry barn quickly changed appearance, the window openings popped out, upstairs floor panels opened, to drop old wood shavings from the second floor to the first, where all is cleared, then the barn cleaned with pressurized water.

Thursday 25th. The Co-Op store was preparing our grocery delivery this morning, checking the list twice. In town, Christmas decorations, lights in particular, seem to be more in vogue than ever.

Friday 26th . Father Bede is preparing little cards for Mass-goers here, to help them with a  newly worded response at Mass. Our Order’s Central Commission meeting in Rome passed along news of an election to be held for Abbot General, in Assisi, the second week of February. 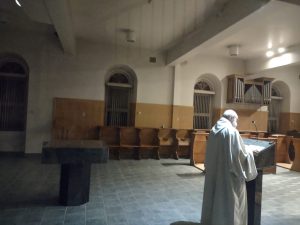 Saturday 27th. Brother Leo was marvelling today at the omniscience of God. Our no-longer-new Keurig coffee brewing machine wound down to zero, no more cups possible, then fought its way back to making more coffees for us.

Sunday 28th. The new French Missal was made in Italy, and seems sturdier than the English one. Prayer intentions for Lauds this morning were a series of blessings addressed to God from us, including blessing him for a new liturgical year. Sunday afternoon, younger, or older people slowly drive around the front area, just to enjoy it.

Monday 29th. At lunch, our martyrology runs from the dawn of the Church, with pioneers of many sorts, through the centuries, often enough ending with martyrs of the French Revolution or the Nazi regime. Snow arrived today, enough for Steve to do some plowing here.

Tuesday 30th. On the feast of Saint Andrew we had a first run through the new translation of the first Eucharistic Prayer for Mass. Using a newly published text is a way of recentering on the Mass, also a reminder of monk-Priests of years past here, and their way of centering on the Eucharist.