Sunday 1st. Our monastery celebrated 118 years today. We also posed for community photos. It has been quite a while since we last tried this, and there were two sessions. At a brief meeting before Vespers, Dom Innocent read us the Lukan Beatitudes, as a counterpoint to Matthew’s version this morning, and our retreat began.

Monday 2nd. Brother Stephan is preparing to place some boulders along the edge of the drive, to demark the wastewater treatment system now just under ground. 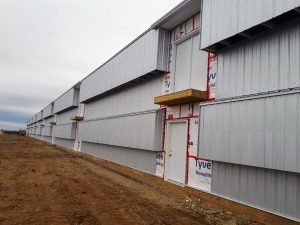 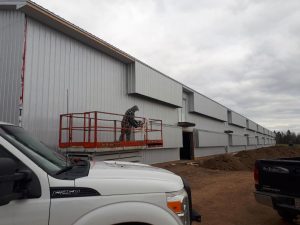 Tuesday 3rd. Construction of the poultry barn is proceeding on different fronts at the same time. Today the special lighting for the chickens was being installed. Exhaust fans are going in, several of them; and propane heating units are being hung.

Wednesday 4th. The monks are taking their turns with weekday retreat homilies, today by Bede, who chose for lunch music a You Tube of our Order’s own, versatile Erik Varden, then a Deacon, taking part in singing the 2011 Holy Week Saint John’s Passion, at Saint Peter’s in Rome.

Thursday 5th. An existing farm back-up generator, and the little building that held it, and the concrete platform under it have all been moved to the new poultry barn.

Friday 6th. Ice on the lake, where geese were congregated this week, gave way under sunlight, to one of the loveliest November mornings I’ve seen here. Before Vespers, we met in Chapter for the end of our silent retreat. Dom Innocent spoke briefly about some spiritual and community priorities for us today, as in the guest house, the first post-retreat guests settled in for the weekend.

Saturday 7th. Brother Stephan took a look at some of the overhead geo-thermal heating units this morning. In general, the building is nice and warm.

Sunday 8th. The Psalm proper to this Sunday Mass, “My soul thirsts for you, Lord my God”, seems to take on new resonance in the assembly, near the end of this challenging year.

Monday 9th. A warm spell arrived, putting a smile on faces in town. Today, Brother Leo today was reaching back to remember his sisters driving him up for his first meeting with the superior who eventually accepted him here, Dom Cherubin Lessen. The first question addressed to an aspirant here, mid-century of last century was: “So. You think you can become a saint?”

Tuesday 10th. In Chapter this morning, Dom Innocent read to us the existing house customary / portrait of the ideal novice, then gathered suggestions as to an update of this document, which gives guidelines on day to day community life.

Wednesday 11th. Father Bede is working on a Calvaire Christmas card, drawing from the community photos recently taken. Dom In 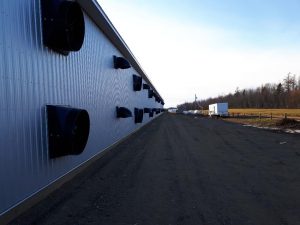 nocent visited Brother Henry in Dieppe today, hoping to get a photo of Henry which could be added in. He found Henry on good form.

Thursday 12th. The fuel tanks for heating the new chicken barn are now installed. Plenty of headlines in the news again this week. It has been a year which leaves no one indifferent, and though we don’t spend that much time commenting on it, 2020 has been a new way of getting to know one another.

Friday 13th. Some first-time retreatants are wrapping up a good stay here.

Saturday 14th. A power outage had our generator humming. After the power company replaced a blown fuse on the line, that went, too. To redress the second outage they came back with a bigger fuse that worked.

Sunday 15th. Edmundo rejoined the community today, taking his place in choir and at table. This makes seven in the house.

Monday 16th. Our poultry industry is into a last production cycle using the existing barns. Our new refectory audiobook, “Barking to the Choir”, is being read to us by its author, Father Greg Boyle, Jesuit pioneer in the field of gang rehabilitation and re-entry, in Los Angeles. His crackly voice is quite a change from the mellow tones of Michelle Obama.

Tuesday 17th. In Chapter this morning, Dom Innocent commented the Rule’s teaching on the Abbot’s table, sharing some of his own experience as superior, going on to remind us of the ongoing nature of the current public health crisis, its pertinence for us, and our policy of adjusting guesthouse policy according to conditions.

Wednesday 18th. On the lake, which is beginning to freeze over, a lone goose was relaxing. Did it miss the flight south?

Thursday 19th. Our cook has been laying up Christmas baking, and this morning the smell of bread baking wafted through the corridors.

Friday 20th. Construction-wise: the heating tanks for the new poultry barn have received their propane. A crew of specialists have been in to work on interior hardware for the feeding and ventilation systems. Other crews work on carpentry inside, and electrical work. Insulation has been blown into the attic space, with more to come. Soon, one of the two siloes will arrive.

Saturday 21st. Bede has produced two nice 2020 Calvaire Christmas cards, one with community photo, one with ‘root of Jesse’ theme.

Sunday 22nd. We had a festive lunch, and have welcomed an Islander friend for his first retreat in a while. Our new barn lights up a bit upstairs at night, and we were discussing this enigma among other matters at lunch.

Monday 23rd. The schedule has been posted for Mass and homily duties for Christmas Season. We have received some letters regarding spiritual favors received through the intercession of our late Brother Humbert Bordage (1868—1958). Brother Humbert’s son Gerard, also a monk here, used to talk about his father’s striking prayer life at home, way, way back when.

Tuesday 24th. In Chapter, Dom Innocent presented a revised portrait of the ideal monk/novice, and after a few suggested changes were  accepted, this became the newest version of our customary. Afterwards, we looked ahead to consider how the functioning of the new chicken barn would or could be different from the old, as regards heating, production cycles and upkeep.

Wednesday 25th. We received a nice letter from a guest, regarding their stay here. As it happens, the guest quarters are now closed again for a bit, due to public health concerns.

Thursday 26th. Brother Stephan plowed away some snow, as the frozen lake turned white, but not for long. The lines for hanging up our Christmas cards are now up, and a first card there accompanied a recent seafood gift.  Often seated in our scriptorium, Brother Leo has been reading the book Ratzinger’s Faith, by Tracy Rowland.

Friday 27th. The external construction of the new chicken barn is reaching completion, and work is proceeding apace inside. Brother Stephan today was adjusting one of the exit doors to the guest house today, removing and reinstalling it.

Saturday 28th. A quite small group attended Mass and seemed to be particularly attentive to prayer, before leaving here to begin Advent in their own milieus.

Sunday 29th. It was the quietest of Sundays, and the hinge of this holy season turning seems to be especially welcome this year.

Monday, 30th. Today, the eagle was flying circles over the lake, and for once coming close to the monastery, with a crow on its same winding path. If this was a territorial dispute, I couldn’t tell. It was nice to see the eagle up close. 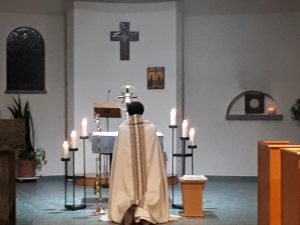 Benediction of the Blessed Sacrament