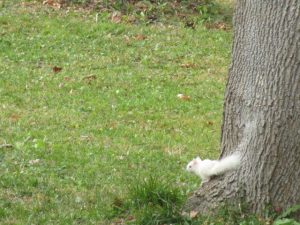 Friday 1st. Father Stephen presided Mass and gave a good homily, also pitching in Saturday. Despite a bit of wind remaining from yesterday, Father Stephen got out for a walk this afternoon, in temperatures in between warm and cold. 12 miles from the Mississippi, the monastery he will soon be returning to has already received plenty of snow. 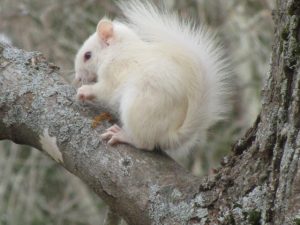 Saturday 2nd. Father Bede is preparing to buy more honey for the store. Recently, we’ve been selling about twenty bottles per week. The refectory book on Winston Churchill’s wife Clementine is quite an achievement. Bringing out much of her story for the first time, the  book is enthusiastically and sanely for Clementine.

Monday 4. The time came to say goodbye to Father Stephen Verbest today. There is always something new to learn, from someone new, in the monastic world, and it was nice having him by. The encounter with him was all the more striking for necessarily being only a few days’ length. Dom Innocent also headed out today, for a two-week conference in Rome, Italy; both will fly out of Moncton.

Tuesday 5. As though to confirm the myth, when Innocent is away, Steve finds surprises, Brother Stephan reported to us today, that he had seen a rare, albino squirrel on our front lawn, and he managed to photograph it. He says such a squirrel is one in ten thousand, but our cook says they are one in a hundred thousand. Word has it that the cats are casting a careful eye on it.

Wednesday 6. Brother Glic this morning took the Kia in to the town’s coin-operated car wash. Later, when we arrived for the Office of Sext, Msgr. Robert Harris was already seated on a Chapel bench, praying. Twelve years after assuming the Saint John See, he has retired, and he stopped in for lunch with us as he re-visits central locations in the Saint John Diocese. It was quite the feed, and with great conversation. 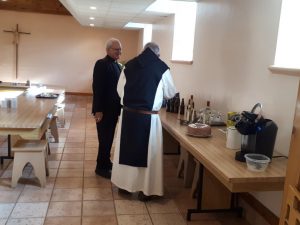 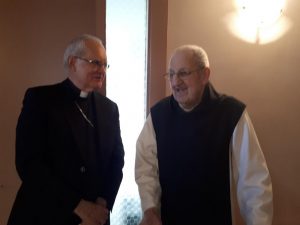 Friday 8th. Thick, black smoke alerted us and others to the fact a fire occurred here this afternoon, in the old garages, which are right next to the site of the previous fire, in the repair shop on Saint Benedict’s Day, 2017. We lost the buildings. The old, big tractor stored inside also went up in flames. The volunteer fire department responded with all their hearts, and much equipment, and the fire was out by evening. 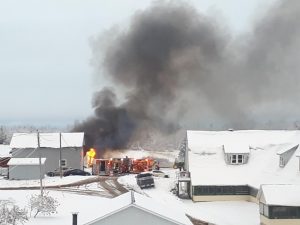 Saturday 9th. Dom Innocent was sorry to hear the news, and says he is happy with the session for new superiors in Rome; week number two is just ahead of him.

Sunday 10th. This afternoon, a friendly and distinguished looking stranger drove in in his truck, to see the rubble left from the fire, then as he was driving away, he gave me a compassionate look and wave.

Monday 11th.  Brother Glic worked on recovering pieces of machinery which, though burned in the fire, may still be good.

Tuesday 12th.  As the days pass after the fire, regular contact demonstrates to what degree others have been experiencing reversals themselves in 2019. In Moncton today, Brother Henry for his part was in good spirits, interested especially in hearing about Brother Leo’s day-to-day life now.

Wednesday 13th.  The eagle was taking an impressive flight here and there over the lake today. The lake is freezing but has little ‘stars’ on it; points where the water breaks though. Some young guests arrived for their first glimpse of a monastery and their first retreat. Things in the guesthouse that seem ordinary to us and indeed are ordinary, for them are visually striking, as they discover a new kind of place.

Thursday 14th. Father Bede has once again come up with a Christmas card design, and the cards he printed up have been placed at our disposal. This year’s card and wish is albino-squirrel-endorsed.

Friday 15th.  Brother Stephan and Father Bede made their way to Moncton today to pick up the replacement red exterior doors for the Chapel, also to see Brother Henry, also to eat Italian food.

Saturday 16th. Life during a superior’s absence has its silent side, its changes, and invitation to look at life. Quiet moments, basically, and a range of feelings. With participants present at Mass today from the Miramichi, “Canada’s Irish Capital” (or one of them) our place took on a different feel, and amplitude. The doors went in smoothly enough, with some help from our friend John. The doors were made in Toronto.

Sunday 17th. All was quiet out back; rubble from the fire is still there, but this particular fire left little behind. Our lumberjack friend was around. I had been going to ask him what woodsmen lore might have to say about a white squirrel: what is it the sign of? But maybe not asking, is best.

Monday 18th. Dom Innocent traded Rome for Moncton, where he will stay overnight, at least. Once he made it to Rogersville I asked him what he made of the course for new superiors and he answered:  “My impressions were several. Speaking to other superiors and listening to conferences for the intense sessions has left me with a good impression. The Order has a lot of life in it. Sometimes when one is in a corner of the world a bit isolated, one does not see just how much the Order is alive. From the youngest abbess in the order at 29 years old to some superiors in their 60s, it is remarkable to see the efforts communities are making to deal with all issues in the 21st century. The Order is alive.”

Tuesday 19th. Simone our cook has begun work on the various meat pies of Christmas, and she has them counted. Invitations were prepared for our approaching employee supper, now being held before the holiday season, to make life simpler.

Wednesday 20th. Our book for refectory has been recounting Clementine Churchill’s beauty secrets. And Winston Churchill’s tub regime, which included somersaults in the tub, somehow, while also offering detailed glimpses of the family’s financial history. This last topic brought back memories of Robert Pichette’s 2002 history of our monastery. He had hoped the book would be a success in France, so it was a bit disappointing to read European reviews which faulted his careful inclusion of the financial story during our colorful, early decades, as being less interesting than what he might have shared instead.

Thursday 21st. It is our first winter with the new security lighting out front and the close of day is kind of pretty with extra light on the snow and in particular the statue of the Blessed Virgin.

Friday 22nd. We met today with someone from the exterior. You know when they begin projecting things on the wall, you will not be l 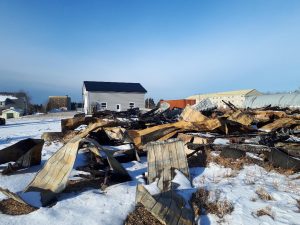 eaving the meeting any time soon. A positive moment, however.

Saturday 23rd. Brother Leo has been enjoying nice, winter sleeps. His dreams are sometimes of epic proportions unlike anything I’ve ever heard of, while other times they are very close to home.

Sunday 24th. The site of the fire has become peaceful, with some metal left to clear away.

Monday 25th. The oysters we received as a gift a while back have been a recurring—and appreciated—feature of meals. Who knew raw oysters kept so long in the fridge? Efforts are underway to acquire sufficient new snow removal means, after the loss of a tractor which served well for this.

Tuesday 26th. Dom Innocent related his two weeks’ course for new superiors in Rome. The Order packed a great deal of material in, and so days spent there were full, but included an outing to Subiaco and Monte Cassino, both of which Innocent had not seen before. The course stressed among other things the importance of ongoing conversion for monks, beginning with the superior and the seniors. The Order as he experienced it sounds like the family we’ve long known. Brother Leo got up to the Miramichi today. He noted that the wide winter river was still open, and impressive.

Wednesday 27th. Two Priests are here for a retreat just before Advent. A third, missionary-to-the-west Priest also signed in. Another guest is making a longer retreat than usual in order to sample the life of a monk a bit, and as such was doing some work today around the house. Dom Innocent and cook Simone were discussing menu options for our Christmas Eve meal today. Normally we have an improbably big salmon served whole, but this year’s feast may be a bit more conventional.

Thursday 28th. Our sisters across the road have received the keys to their new monastic home, as of a bit, as finishing touches are added to the building. Priests currently going over to say Mass are serving their last turn in the existing chapel.

Friday 29th. Steve has now installed all three prototypes of his pipe organ doorbell on the annex wall; they look good on a wall, evocative, pretty, and these are not even the finished invention which will soon be marketed. As we were doing the dishes at noon hour, the happiest of young couples strode in and with a cheerful laugh told us they were really enjoying their visit so far. Only thing is, we didn’t know who they were, or why they were so far inside the cloister, each monk guessing another monk must know them. They were guided back upstairs and signed our guestbook: may all their paths be as happy.

Saturday 30th. Our friend John was doing a little carpentry work downstairs this morning. He has also been putting finishing touches on the new red doors to the chapel. 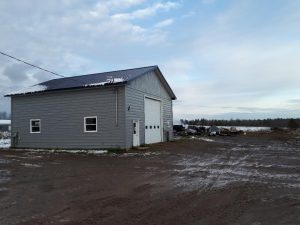 Peaceful, but a bit bare.