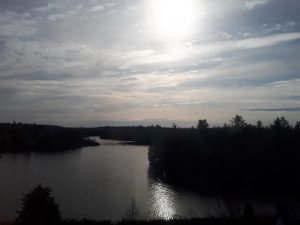 Wednesday 1st. Feast of All Saints – 115th anniversary of our foundation. Dom Bede gave a nice homily at Mass which, with only a few attending, had an intimate feel. During Mass, you could just hear the skid steer moving about on the farm; leaves having fallen, farm life acoustics are better than ever! 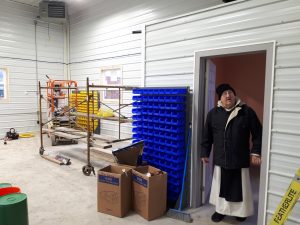 Thursday 2nd. Brother Léo took a tour of the new farm repair shop, and was impressed. Along with the ceiling’s height, and the pristine newness, the most striking thing about the nearly-finished building is its advanced interior lighting, a far cry from what was on site before. Irving employees were working at getting the shop’s propane heating hooked up. Léo kidded them, saying he was a government inspector.

Friday 3rd. In Chapter, we had a last look together at the résumés of General Chapter house reports. Each résumé is written in a slightly different style. Before long, complete Chapter minutes, and all of the house reports, will arrive by post.

In town this morning, people were saying: ‘look how dry the ground is’; ‘it will cause problems next spring’. Some wells are dry, they said. This afternoon, we got a decent rain, which the birds quietly seemed to appreciate.

Saturday 4th. At night, light from inside the new shop now shines through a window, and a little flood light overhangs the door.

Dom Bede and Brother Stephan went to Moncton today to greet our retreat master upon his arrival at the airport.

The full moon rose over the treeline, between the dairy barn and the new repair shop. Orange-hued, it seemed bigger than ever.

Sunday 5th. Sunny morning. There were actually long puddles in the ditch and ice on the puddles. But not on the puddles on the road.

Having one more monk in the house is quite something for a group as small as our own. It can help a person hear more clearly the call that brought them here; it can help them see the chance that’s offered. Father James began his conferences the best way possible: by speaking of Mary.

Monday 6th. Brother Henry returned to his dentist in Moncton today. On the highway between here and there, many evergreens were yellowing: more pretty than eerie, but unusual; unusually dry.

After Mass here, Father James heads to the sisters in our car, to present the retreat to them mornings only, resuming conferences here after Vespers. James was a bit surprised by the ‘Dukes of Hazzard’ style driving on the highway; I explained that it is under-patrolled. 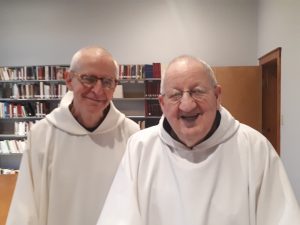 Tuesday 7th. The new books for Lauds are to Brother Léo’s liking. Bede found these near-200-page plastic portfolios not without effort, I think they shipped from Korea. Little by little, we encounter Lauds Psalms, same antiphon, but in English for the first time.

Wednesday 8th.  Léo dropped a bowl on the floor in refectory, but it did not shatter.

Our new audio book in refectory is a biography of second United States President, John Adams.

For Canadians of a certain age, the mention of John Adams recalls first visits to the 1970’s-era Hall of Presidents at Disney World: animatronic sophistication; the realisation that our American cousins let history run deep. It had almost a religious atmosphere.

Thursday 9th. Father Clovis, chaplain to the sisters, sits in on some of James’ retreat here, which has gone over well. The right fellow, at the right time. Clovis suggested we find a member of the Order to fulfill the role next year, too.

Saturday 11th. Father James made his way back to Moncton, where he will stay overnight, taking a taxi to the airport at 4:45 tomorrow morning. As we parted company, James was walking into Saint Thérèse Church for 4 PM Mass, planning on a meal afterwards at McDonald’s: it’s the fries. James coached Bede on the right way to pronounce the restaurant’s name, but Bede pointed out that in Paris, they pronounce it differently.

Sunday 12th. Nothing new, but the November sun in the early afternoon, full and bright but softer, dipping closer to us sooner, is nice. The cows stopped by the window at the light diffused through solid white cloud.

Monday 13th. One secret of Brother Léo staying young may be his manner of reading. He reads plenty of the Bible and other texts daily. But also reads books others give him or that he happens to find. Currently he is catching up on the Search For Noah’s Ark phenomena, by reading the book from the 1976 film, which caused quite a stir…and disappointment. Léo says the science behind the book’s theories does not seem airtight.

Copies of the new Calvary Abbey Christmas card, French and English version, have been placed in the scriptorium for monks to send their greetings with. This year’s cover has an evocative painting by Father Innocent, of a house in the woods.

A Priest friend from the Island left us a gift basket with treats from around his home, including plenty of bottled clams. Ladies from the Miramichi brought Brother Léo a lovely gift bag for Christmas; his haul is beginning early!

Wednesday 15th.  The elevator service person was here today. The key to the elevator pit has gone missing, so he will we hope supply a new one.

Thursday 16th. Father Innocent returned from Ottawa. He says that what you see in downtown Ottawa is restaurants: restaurants everywhere.

Friday 17th. Far off, you can hear someone hammering, on and off. It is a nice sound.

Sunday 19th. The new farm repair shop is starting to look more like home as Steve’s equipment, welding for example, is moved in. Brother Glic has been painting some of the wood inside, like the window trim. Like before the switch for our gas pumps is now just inside the door, with a clip for farm invoices next to it. It would be nice to have a photo of the interior of the old shop, which had plenty of character. It was like a page out of time.

Monday 20th. Different generations and faces meet at the barn, I guess farming makes its own family. Cats there are also. Just about every week I see a barn cat I had not seen before. One black cat in particular is calmer than the others, more at ease with farmers walking around, and just about anything.

Tuesday 21st. Father Innocent went to Moncton today to meet an aspirant at the airport. Vocational Interest from farther afield seems to be becoming more regular than it once was, particularly from outside the Maritimes.

In the guesthouse, a crew was preparing for a full night’s work refinishing upstairs floors. This will mean a rare night’s sleep on our side of the wall for Brother Léo, who will vacate his corner porter’s room temporarily.

Wednesday 22nd. Dom Bede received some new robes from Father Andrew at MSB in England. Is English tailoring really better? Put it this way, the robes are nice.

Post re-finishing, the white floor gleams in the guesthouse corridor.

Simone prepared us a nice soup with lunch on this cold day.

Robert Pichette, who published a history of the monastery in 2002 was able to stop by for a visit, first time in a while. He is a reminder of how good life is to us here, often.

Thursday 23rd. Brother Henry left the Résidence Notre Dame du Sacre Coeur this morning surrounded by good humor and affection, as he returned once more to the dentist’s office. Outside the entrance of the residence, an inflatable snowman was forming a plastic puddle soon to spring to life.

Friday 24th. Simone made an apple cheesecake for us.

Dom Bede announced that a reporter from the Moncton Times & Transcript will be staying overnight next week in order to take in a bit of the atmosphere, meet some of the monks, and write a story for the paper. It has been a while since we were last featured in that paper.

Father Innocent showed our aspirant around the barn, and a Jesuit presently here on retreat tagged along. The Jesuits in Ontario are exceptional for Canada in that they still consistently draw vocations, he says.

Saturday 25th. There was a little problem with the feeders in the chicken barn, which a long-time employee saw to. The feed, the water, the heat working correctly are all crucial there.

Sunday 26th. With a very light snow this afternoon, cats on the farm who don’t look up at us too often, stopped in their tracks to wonder at something new for a lot of them, and looked up as though to say “check this out, man!”

Monday 27th. Father Innocent is bouncing back from the worst flu and cough he has had. None of the other monks caught it.

In Chapter, we are discussing points raised in the Visitation Card from our recent Visitation. It is a unique chance to step back and take in what we’re living with another person: Dom Clément, our Father Immediate.

Tuesday 28th. The reporter from the Moncton paper arrived yesterday, and has been attending Offices, meeting with monks, taking photos. Each reporter brings something of their own to bear on our simple life. They seek and they find material differently; a visual image, or a story will stand out for them especially. Michelle headed back to Moncton after supper. In the evening someone asked? Yes. She said that though locals worry so much about moose danger (in the evening, for example) on our roads, there were more moose in Alaska, where she once lived.

Wednesday 29th. It was a windy night, crisp but not cool out. Today marks two years since our Father Maurice Guimond died, with younger brother, Jacques, at his bedside. That November seemed more like a November than this one has, weather-wise. And it seems like a long time ago.

Thursday 30th. During Lauds, Father Clovis walked over and gave guests the right page and place for following along, which they appreciated. Currently it’s a retired couple staying with us, with their son. They are from somewhere special: Cape Breton.