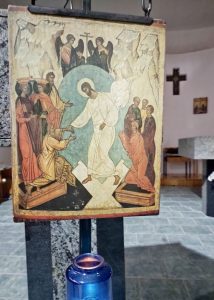 Sunday 1st. Dom Innocent got back early this afternoon, rounding out our number of six monks.

Monday 2nd. As we undertook Vigils, the power went off for just a moment. Then the generator and the lights came on.

Tuesday 3rd. Brother Stephan is doing maintenance of the wall heater units, which for now are still on. After Lauds, we looked at a first draft of what our house report may look like, for the General Chapter. Normally, each monastery looks back over three years in their  report; this time it is five. Filed away is a report we finished back in 2020, for a General Chapter which never took place.

Wednesday 4th. Today we celebrated Blessed Marie-Leonie Paradis, a Saint with strong connections to Memramcook, Brother Léo’s home village. He says he is not too familiar with her story; his family were off in the woods a bit, and not all that familiar with life in central Memramcook.

Thursday 5th. Cut daffodils from along the annex wall are now brightening up the Chapel. Just a touch of snow, seems to have been encouraging for the flowers.

Friday 6th. Dom Innocent is looking into options for storing the wood shavings we use as floor covering in the chicken barn. This morning, the community looked at a new version of the house report. Things looked good, in general, so we move along to the next stages of work on the report which eventually will get translated into French and Spanish.

Saturday 7th. Father Bede has received some lovely cards from his family, for his 50th anniversary of Priestly Ordination.

Sunday 8th. Guests remain few, but the added calm for those who do show up, seems to be a good thing, right about now.

Monday 9th. The community list, giving the dates of various moments in our lives, was updated recently. Our average age is now just under 70. Our youngest member is Dom Innocent.

Tuesday 10th. Dom Innocent went to Saint John to provide pastoral support at a regular gathering of the Saint John clergy alongside their Bishop Riesbeck. We received a chronicle from another Canadian monastery. Different monasteries have their own way, of sharing their news. Sometimes a newsletter is circulated within the monastic family. Sometimes, as with Saint Benoit du Lac, a biannual color magazine is produced.

Thursday 12th. Brother Stephan is changing the oil in the Kia and the Honda. Brother Leo asked me to pray that he not have a fall,  th 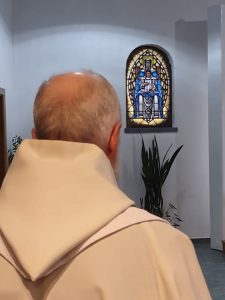 e remainder of his days. He’s conscious of what that could mean for his health. Spry for 95, he still manages to (carefully) run a bit in the corridor, now and then, behind his walker.

Saturday 14th. Tulips made their spring debut this week, as did dandelions, and the little flies which make people run for cover. Also this week, Bede made an inaugural cycling run.

Sunday 15th. For music at lunch, we listened to British music hall comedy, or ‘Cockney Classics.’

Monday 16th. Tiles arrived, for redoing the ceiling of the basement corridor. We heard today from relatives of Dom Antoine Piana (1859-1938), first superior and one of the French founders of our monastery. It is the first time in living memory we have heard from them. They were asking about Antoine’s life here, and gave a bit of background on the Piana family: originally from Genoa, Italy, the Pianas settled in Moularès France. The farm which Antoine grew up on is still in the family’s hands. Antoine’s letters home from Calvaire were not preserved, regrettably. 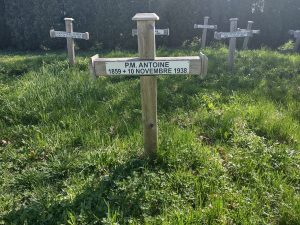 Tuesday 17th. In Chapter, Dom Innocent spoke about the sense of the word monk, and the oneness in community it implies. He asked Brother Stephan to verify the electrical outlets for the room where representatives from the monastic region and beyond will soon be meeting. And plugging in.

Wednesday 18th. Our refectory audiobook brought us briskly enough to Joseph Ratzinger’s Episcopal Ordination, in 1977. Here is Archbishop Ratzinger’s prayer to Mary at the Marienplatz procession, which ended his Ordination ceremony: “In the strife between parties may you be reconciliation and peace; when we get lost in questioning show us the way; quell the quarrelling, revive the weary; give the mistrustful an open heart; give consolation to the embittered, humility to the self-satisfied, confidence to the fearful, prudence to the hasty, courage to the hesitant and to all of us the comforting assurance of your faith.”

Thursday 19th. Father Bede left his doctor’s appointment in town, just as the Via Rail passenger train rolled to a stop in the distance. He says that the train is now running more of 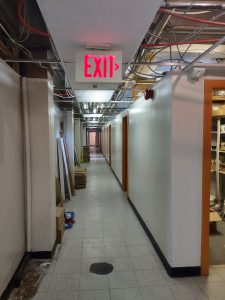 Friday 20th. Our cook is soaking some fiddlehead greens for our table. Yesterday, the old ceiling tiles were taken down, and this morning the first new tiles were placed, looking smart.

Saturday 21st. High winds which preceded an overnight thunderstorm blew our little statue of Mary from her wooden niche, near the back door.

Sunday 22nd. Brother Leo is making jokes about the marvelous state the basement corridor is in: its loveliness inspires him, it seems.

Monday 23rd. A helper is handily trimming some of the many shrubs and trees surrounding the monastery.

Tuesday 24th. In Chapter, Dom Innocent spoke a bit about the upcoming meetings here, with the travelers we soon expect, including superiors, superiors emeritus, the Abbot General and his secretary. The guesthouse will be reserved for them, a week from next. He mentioned his intention to newly arrange the store areas, moving the pottery items into the bookstore. This will accentuate the goods on offer, and free up a small room next to the guest-house reception.

Wednesday 25th.  Father Bede replaced the candle which burns continually before our icon of the Resurrection.

Thursday 26th  For memorial Masses such as Saint Philip Neri today, the month of May has us taking up the Dominator Deos Kyrie once again. Its poignancy struck me anew.

This morning, Brother Leo was musing on the idea of royalty, and remembering the royal tour of Canada of 1939, with its train stop at Memramcook. He was struck then, and remains struck by the humility of King George VI. 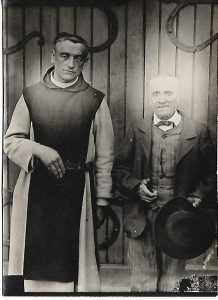 Dom Antoine Piana with his father. 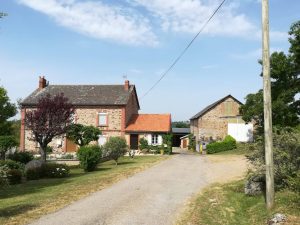 Friday 27th. The family of our founding superior say that, the question of lost correspondence aside, they do have some documents which may be worth having in our archives. They sent recent photos of ‘la Martelle’, the Piana family home in France; and of Dom Antoine’s great grandnephew; and a vintage photo of Antoine with his father just before the big departure for Canada in 1902.

Saturday 28th. Our friend John has been installing new lights in the basement corridor, to go with the new ceiling tiles. The new lights are motion sensitive. He was at work today before sun-up.

Monday 30th. Dom Innocent got a good bit of lawn mowing in today. The farm leaseholders are putting a first cut of grass sileage into the bunkers.

Tuesday 31st. We have a new toaster, first time in a while, and it claims to be a smart toaster. Brother Stephan has been working out problems with both the external bells, which sound for Lauds / Angelus, end of afternoon work, and Vespers; and the little chimes that go off inside the monastery, twelve times a day and more.