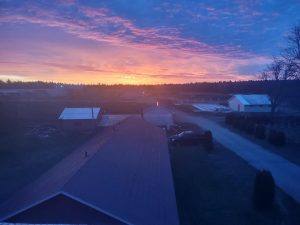 Saturday 1st. With borders re-tightening, just when it was thought they might loosen, Bede is not all that busy with guests’ reservations. As regards our own health, Dom Innocent reminded us this week of the importance of individual responsibility, along with sensitivity to life’s current changes.

Monday 3rd. Today, the third flock of chicks for the new barn arrived. In a given year, there are seven flocks. In the greenhouse, tomato plants are growing. Waiting to be planted alongside are cucumber, zucchini, red and yellow pepper plants; and more besides.

Tuesday 4th. In Chapter, Dom Innocent commented the Rule of Saint Benedict chapter 64 , on choosing an Abbot, a chapter that in a way paints a picture of how Benedict saw life, and monastic life

Wednesday 5th.  Brother Stephan took leftover topsoil from the chicken barn construction site to top up the ground along the drive, where the monastery faces the lake. Last year’s work on a wastewater treatment system went on in part there, as two manholes show.

Thursday 6th. Father Roger cut some daffodils from around back, and arranged them with a few flowers from Easter still decorating the Chapel. Our refectory book, on the life of Joseph Ratzinger, takes its time, and takes pains to provide detail on the milieus in which our Joseph found himself.

Friday 7th. Brother Leo has been recalling the month of May as it played out in his home village, long ago. Playing baseball after supper, a bell would ring. They would immediately leave the ball field and enter the Church to join a half-hour of Rosary prayer, interspersed with Marian songs sung by the best singers around. Then back to the game.

Saturday 8th. Father Roger made us nice soup with rice, warming up the day a bit. Brother Leo is nearing the end of the biography of Newman he is reading, and can’t get over the trouble people gave Newman near the end of his life, or the tricks they would get up to.

Sunday 9th. Today marks three years since we had the on-site farm equipment auction here, an event which drew quite a crowd. The voice of the auctioneer that day could be heard from afar. 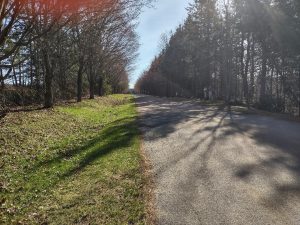 Monday 10th. The reappearance of Saints’ days that our Order celebrates — some obscure, some widely celebrated — adds a sense of stability to the unusual trajectory we are on globally. 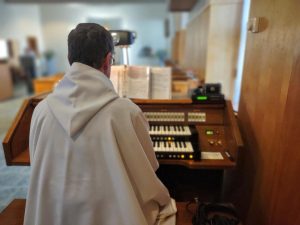 Brother Stephan at the Organ

Tuesday 11th. During Chapter this morning, Dom Innocent reviewed material from our region’s superiors’ recent on-line meetings. Father Bede’s three-wheel cycle reappeared today, as Stephen wheeled it out to the shop for its spring tune-up.

Wednesday 12th. The wooden stair leading to the rooftop was in use again, as the same workers who demolished the chimneys pulled sheet metal up to the roof, and capped things. On his inaugural cycle ride this year, Bede was able to look up and admire how the job turned out.

Thursday 13th. Brother Stephan seeded the stretch of front lawn running from the bell tower to the grotto stairway entrance.

Friday 14th. Although the dairy barn which was home to the swallows came down last year, ending their summer on quite a different note, they did return to the property.

Saturday 15th. The basement corridor, leading past many little change rooms, got cleaned up this week; plus, the corridor just past it, leading through the annex. Brother Stephan worked on some wall heater units, as we continue heating this year. 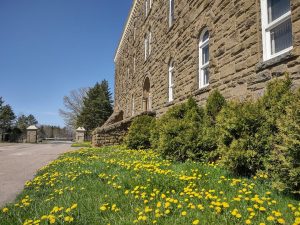 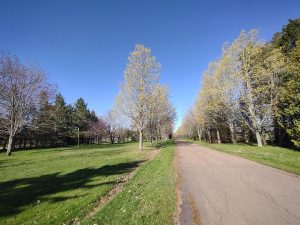 Monday 17th. It is greening up nicely. As time goes by, the new chicken barn begins to blend in with the surroundings, instead of being such a striking addition. 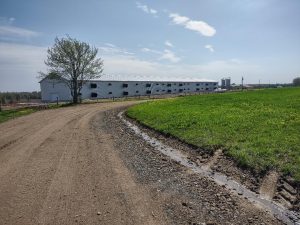 Tuesday 18th. Dom Innocent in Chapter considered the Rule of Saint Benedict in light of our Order’s Constitutions, which integrate the Rule. He said that next week, we will hold elections for the third member of the council, as this has not been undertaken in quite some time. Brother Leo is having his eyes seen to in the Miramichi, and it is going well. He admires the look of the hospital there.

Wednesday 19th. With the advance of weeks, and months, more of our monks are accessing the COVID19 vaccine. Such a moment is as it were new light on a by-now old story.

Thursday 20th. The antiphons and other elements for Easter remain lovely, seven weeks in. As the Paschal Candle burns lower, it has become necessary to remove the topmost incense nail, custom-made of metal here.

Friday 21st. Dom Innocent is having the name plate for Brother Henry’s Cross in the graveyard made. Today, the current Bishop of Saint John, Christian Riesbeck dropped by for his first look around, guided by Dom Innocent. It was an exceptionally nice spring day for it.

Saturday 22nd. The monastery heating system went off  this week, and lawn mowing outside began. The Honda Civic had its software updated.

Sunday 23rd. Our first May retreatant joined us, just in time for Pentecost.

Monday 24th. At breakfast, the scent of Gorgonzola cheese on the tray hinted at the wonderful Solemnity just past, with its abundant table offerings.

Tuesday 25th. In Chapter, the green ballot box was passed around the circular table, to drop in ballots for third member of the Abbot’s Council. Bede was chosen. While we were in Chapter, Dom Innocent mentioned that a monastic visitor who had been scheduled to be here before public health issues arose, now hopes to show up after all and give us some talks this fall, as conditions allow. Also today, Dom Bede received some nice messages for his feast day. 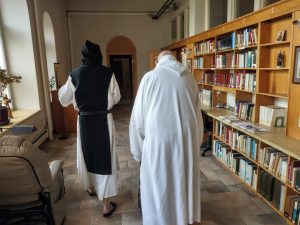 Wednesday 26th. In refectory, a refuse bin has been labelled compost only, indicating we are back to composting.

The different trees, including apple, are blossoming in a variety of colors. Dom Innocent got his tripod and camera out to get some pictures.

Thursday 27th. Hymns and antiphons make the return to Ordinary Time beautiful. Our senior-most monk finds that Ordinary Time is the best time of the liturgical year.

Friday 28th. For all its similarity to other Popes’ lives, the biography of Benedict the XVI we are hearing read is a unique kind of offering. Telling Benedict’s story partly through detailed considerations of the post-war European Church, it renders insights of many sorts.

Saturday 29th. The lawn chair ready for one monk has been put out on the lawn once again, facing the lake.

Sunday 30th. When Vigils ended, there was just a touch of light outside from the daybreak to come. Spring is progressing, but it went to zero and below this week, nights, and Dom Innocent says this killed some of the apple tree blossoms. 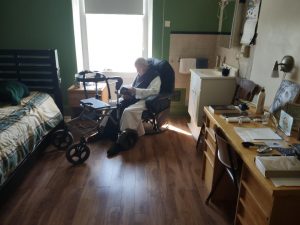 Monday 31st. Our refectory book is now considering the subject of Saint Bonaventure. Bonaventure happened to be our late Brother Henry’s favourite, among the Doctors of the Church.