Friday 1st. The road which leads past the monastery is a secondary highway connecting north and south. With emergency health measures in place, traffic there has decreased markedly: the road is the way I remember it being about 35 years ago, except that people did not generally drive as fast back then.

Saturday 2nd. Using a special attachment to the tractor, Steve trimmed some hedges this week. With things stirring more, there is  once again a bit of earth and plant debris appearing on the annex corridor floor…kind of nice!

Sunday 3rd. It was mild enough out today for monks to enjoy a quiet stroll without bundling up. At Mass this morning, Dom Innocent spoke of the importance of praying that Christ the Good Shepherd will lead present-day humanity to good pasture, and accord ways of dealing with the world’s problems.

Monday 4th. Although spring 2020 is slow in bringing visible changes, the smell of smoke from the greenhouse wood stove is sweet. Across the  lake, there is a faint shade of red, from trees that are budding. Inside, we sat down to a new sort of meal this evening: poutine squares.

Tuesday 5th. The power was shut off for a while this morning so that work could be done on the electrical system. In Chapter, we talked a bit about the new chicken barn: dirt roads are too wet for the time being to truck gravel over to the site. We also considered the development of the lockdown in the Province, as it affects us. One of the monks said that given the size of both the building we live in, and the land we live on, no comparison could be made with the situation of families forced to remain in close quarters. Dom Innocent added that the present situation offers us a chance to focus anew on our calling.

Wednesday 6th. Brother Leo and I had to make our way into the Miramichi, first time seeing it under lock-down. Leo was struck by the loveliness of the river. . . and the friendliness of the seagulls. Though there was a certain tension in the air, Miramichi is still a strikingly warm community.

Thursday 7th. Dom Innocent has been trimming branches both on decorative hedges, and trees in the garden area. Out front, there are from time to time lone visitors taking advantage of scenic spots such as our grotto, which has its own little parking lot.

Friday 8th. We celebrated the Algerian martyrs (1996) today, including our brothers from the monastery of Tibhirine. Given their story, with some features shared with communities like our own, our Amen takes on a slightly different meaning today.

Saturday 9th. Nearly at the same time, we learned that the Order’s  2020 general Chapter has been postponed a year, and that New Brunswick is lifting some of its health-related restrictions. 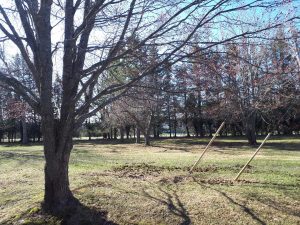 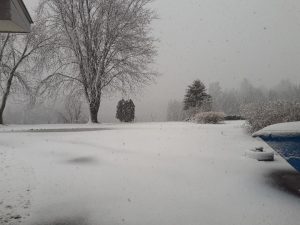 Sunday 10th. It snowed a good part of Saturday, giving a quiet feeling today. For lunch, Father Bede chose songs from the Music for Mercy concert in the Roman Forum in 2016, the Year of Mercy.

Monday 11th. Our lawn drank in the new snow, but did not green up much. A truck came and picked up what was left of our cut wood, small piles of long logs. Father Bede replaced the candle which burns continually this season before the little icon of the Resurrection, in front of the ambo.

Tuesday 12th. In Chapter, Dom Innocent mentioned that Pope Francis has announced Thursday would be an interreligious day of prayer, penance and works of mercy for an end to the Covid virus. We also considered what the province’s near future, and our near future might look like, in terms of a possible easing of health restrictions. Our store and guesthouse are two services which may begin to operate again some time.

Wednesday 13th. Brother Stephan’s recent French-language radio interview and accompanying text have been posted to our website. Having interviewed Steve regarding the sale of our dairy herd, cheerful reporter Michel Nogue checked in this time on how the 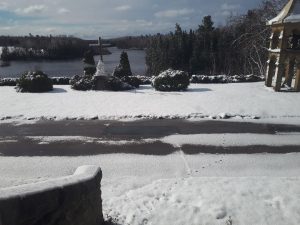 monks are experiencing the pandemic’s restraints.

Thursday 14th. Brother Henry made his way across a quiet Moncton for a regular medical appointment today. As is not unusual, the access-van driver had some interesting things to share, and wisdom to offer. Henry made out well, and seems ready for anything life might send his way.

Friday 15th. Today Brother Leo was talking about the Gospel according to John. It is his favourite Gospel, but this was not always the case. John’s theological riches make Leo smile.

Saturday 16th. Father Roger drew on the newly issued Mass in Time of Pandemic today, with its special prayers. Praying that way here alone is a moment which calls to mind the monastery’s calling, its importance for the world, its possible light.

Sunday 17th. The play of light during Offices this time of year recalls the days the stained-glass Cross in our chapel was first installed, and its original dynamic. Created on Prince Edward Island, it represents the Resurrection and when first installed had no light filter behind it, allowing a change of light in. Then the sun sent a little beam into the corner of the eye of the wrong monk at the wrong time, and the filter went up.

Monday 18th. After Mass this morning Dom Innocent, Brother Stephan and Father Roger went over to the site of the future chicken barn, where Dom Innocent blessed the construction site. These three are the monks principally involved with details of the upcoming construction. Having such a project begin at once energises things in a monastery, and can lead to the house itself feeling at times quieter. In refectory our last book River of Doubt has given way to a new read, Following Jesus: Finding Our way Home in An Age of Anxiety, by Henri Nouwen. This book consists of never-before-published material taken from talks Nouwen gave on this theme.

Tuesday 19th. The swallows have returned for another season, and today they were travelling deftly through the air gathering food. As the temperature outside inches up, the geese become less visible, I’m not sure what their wetland itinerary is this time of year. In Chapter, Dom Innocent commented the Rule of Saint Benedict as regards receiving correction, considering the Rule’s teaching within the longer Christian tradition.

Wednesday 20th.  After finishing off another cup of coffee, Brother Leo was admiring the look of the cup, made by Dom Innocent our potter. After a long-enough run, the heating system has been switched off for the season by Bede. 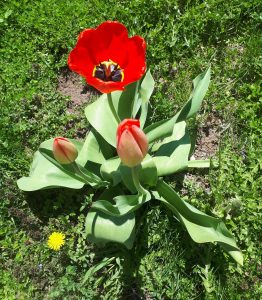 Thursday 21st. In front of the monastery, our Vatican flag has gotten caught up on the pole. The Nouwen book has started off well. It evokes distinctly positive values of late-20th century Catholicism, a reminder of their embodiment locally.

Friday 22nd. Brother Stephan did a clean-up of the litter in the ditches near the road. Dom Innocent is seeing signs that his grape vines are coming along nicely…and that the raccoons are noticing, too.

Saturday 23rd. Work on the switch for the back-up generator was completed this week. Work began on additional security lighting. A new employee time clock was installed.

Sunday 24th. Brother Leo got outside to have a look at the site for the new poultry barn today, and at the same time, had a look around at our fields and trees, delighted by little changes, and even by the dandelions.

Monday 25th. The visitors’ picnic table was put back in place near the grotto stairs. As trees of different of different sorts flourish on the lawns out front, the space comes to look a bit like a park. Brother Leo today was remembering jobs he held 70 years ago; one I had not heard of before was the public works department, highway crews. Leo sounds to have been a detached young man who could adapt to any sort of workplace.

Tuesday 26th. Our friend John opened the big wooden doors of the chapel, and set to work on the doors within, finishing the door frame. In Chapter, Dom Innocent commented the Rule’s counsel on remarking faults by monks during the liturgy. It is a milieu where ideals, reality and, it is hoped, humility meet. 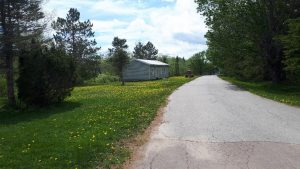 Wednesday 27th. A company arrived to disconnect the power from the building on our front lawn we refer to as the cannery. This move was a necessary step before the planned demolition of the building, which in decades past served as the locale for processing honey, from hives just beside the main entrance, as well as for the fabrication of Monacad ointment, a commercial venture which someone else has taken up locally. Some find the vintage building picturesque, others feel differently, in any event it has served us well.

Thursday 28th. Brother Stephan reworked some of the detailing on the custom pick-up truck. As he noted, we now have goldfinches outside, nice. It was necessary to head up to Miramichi today. A laid-back place, as ever, but hungry for a return to regular life.

Friday 29th. We celebrated the feast of Saint Paul VI today. The road from his days to now seems an unlikely one, or at least an unforeseeable one, with so many good turnings for the Church tucked away here and there. Some scaffolding went up in front of the cannery today: maybe material is going to be recuperated from it.

Saturday 30th. Dom Innocent got into Moncton today, and managed to look through a window upon Brother Henry, who is going strong. This evening after all the prayers were through Father Bede readied the Paschal candle to burn through the night and greet us for Pentecost Vigils. 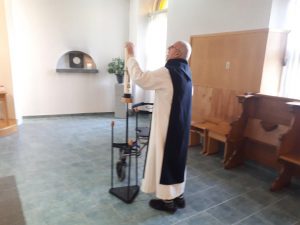 Sunday 31st. At lunch we discussed among other things a way out of the flag pole tangle, and the wisdom of flying two flags at once. This afternoon I spoke on the phone with a hermit friend who has her own take on current affairs, the way a hermit should I guess. She predicts a resurgence of interest in becoming a hermit in New Brunswick.