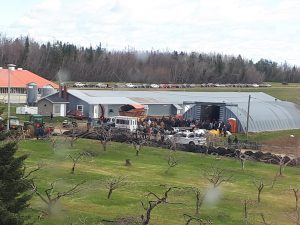 Tuesday 1st. Brother Stephan, now freed from morning milking, is able to attend Vigils at 3:40 for the first time in many years. Dom Innocent made a friendly visit to the Trappistines today, sharing Mass and lunch and a good part of the day with them. We had the tires changed on the Ford truck. The Kia hybrid does not need seasonal tire changes.

Wednesday 2nd. Léa did some cleaning on the ground floor, in the Chapel and scriptorium. Monastic visitors will be arriving to this cleanliness next week by plane, train and automobile.

Thursday 3rd. Many of our hymns were composed by Brother Stephan, using recent, French texts available from the Order. Written in a musical style based on Gregorian, his Easter pieces express the magnitude of the joy of Easter by means of their very restraint, and fine melodic qualities.

Friday 4th. At a Brother’s suggestion, we are going back to an actual flame for the Sanctuary light in Chapel. The reason was, that propane smells: there is an additive in it, present for safety reasons, an olfactory alert. Just before None, three women were driving around the barn in a special ATV, guess they are interested in the farm auction. They seemed surprised to suddenly see a monk and found the scene a bit funny.

Saturday 5th. The big milk tank was not going to be sold, now it’s been added to the sale, a wall will have to be removed from the milk house eventually to get it out. Brother Léo asked me before the dawn, what will the weather be today? I said I don’t know. He said it has to be good, for the farm auction. Didn’t sound or look good but then the sun came out during Mass and it would be very windy, cool all day; some sun, no rain. I wondered how the caterers were managing in that wind. The turn-out was excellent. People seemed happy, but our senior most tom cat walked away from it all, walked behind the monastery, hanging his head.

Sunday 6th. We have not had the spring-flooding other parts of the Province have but looking down at the lake you can see that the field on lake’s edge where our dear Father Edmond once tended his strawberry patch, is flooded. The lake is higher, and lighter brown with so much water, the wind producing lovely ripples breaking into wavelets at times. At supper, a table had been added changing the set-up from u-shape to a square. Tomorrow, the guests begin arriving and it will be a lively few days.

Monday 7th. Dom Bede added four more stalls to choir to make room for our monastic guests. Adaptive Office were by, they took away the laptop from the refectory which is used mostly to play our audiobooks, now out of service. We had a festive supper this evening, most of the guests here and at Assomption having duly arrived. The guest from Manitoba’s flight was two hours late arriving in Moncton, he rolled in after we’d all gone to sleep.  Around the farm yard, equipment rolls away, quietly, little by little.  Saturday’s was a successful auction in every way.

Tuesday 8th. The Canadian superiors, and guest superior Mère Michel Cointet from Bonneval France meet mornings and afternoon, as their secretary takes notes; the rest of us carry on as usual these few days together. Brother Henry saw his M.D. today in Moncton. Despite advanced Parkinson’s, Henry maintains a strong interest in life and new people. Bishop Harris of Saint John was by for lunch today, making for three Montréalais at table.

Wednesday 9th. Our grain silos rolled away today, you have to wonder who bought all this stuff. Brother Stephan’s sister arrived from the US yesterday for a visit, always nice. The assembled superiors plus Dom Bede went to the Sisters for lunch today. 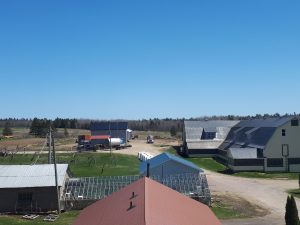 Silo being carried away. 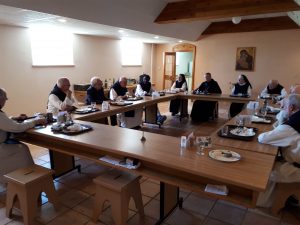 Thursday 10th. Having other monks and nuns around, brings a lot of fun, a lot of laughter, as well as wonder and prayer: a sense of the reality of our call, the value of the witnesses to it around us. Today was group photo day, and we got through it, thanks to Sister Kate our guest-photographer. As we assembled once again outside the red doors, Brother Léo noticed that some of the stone from the building is crumbling off. It’s a soft stone, and a nice color. Meetings wrapped up today.

Friday 11th. Dom Clément, who lives farthest North, left after Mass. Other Superiors and monastic guests had some free time / catching up on work time. Dom André Laberge, who is working on his latest CD, a new harpsichord recording, pointed out some interesting new classical performers, the most impressive perhaps being Benjamin Alard.

Saturday 12th. Brother Stephan has made it to Mahone Bay Nova Scotia for a few days’ rest. It is a first time he can stop farm work for a day or two without being on call, to sort out problems. The remaining Superiors drove out before Lauds, Dom Laberge having taken the train from Rogersville to Montréal last night.

Sunday 13th. At lunch we listened to jazz bassist Dave Holland’s collaboration with Pepe Habichuela. Quietly, real spring, including a bit of warmth (at least during the day) begins. Ordinary life, rich as spring, awaits, too.

Monday 14th. Among the guests this week are New Brunswickers, Prince Edward Islanders, and even a visitor from Calgary, Simone Brosig who will speak to us about the liturgy later on in the week. She is the director of liturgy for the Diocese of Calgary. A Priest-guest in his mid-nineties was telling me today he feels that Pope Francis is just the Pope we need now.

Tuesday 15th. In Chapter, Dom Innocent spoke about virtue in the Rule of Saint Benedict, virtue informing our desire; virtue satisfying our desire.  With Stephan back from Nova Scotia yesterday, it was time to fuel up the Kia in preparation for Dom Innocent’s journey to Saint John tomorrow, to take part in a day for the Parish Priests and hear their confessions. It will be an early morning away for him.

Wednesday 16th. Father Roger has been showing the state of our cemetery to a handyman, hopefully we’ll soon see the cemetery looking better. The transition from white, wooden crosses to crosses made of pressure-treated wood standing on special bases has taken time. 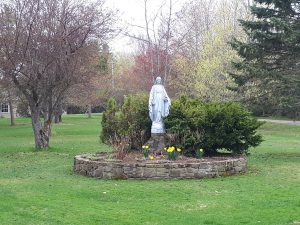 Thursday 17th. Work continues on de-commissioning the main dairy barn, so that it can serve eventually for something else. Its past character as a building quietly resonates, as it becomes part of the regular world.  NB Power surprised us today by sending a team to trim, trim, trim the trees; and there are a lot of them out front. Today was also back to lawn-mowing day, with attendant nice smell.  Unusually, there are no more jugs of apple juice from our orchard left in the freezer. Some monks have some every day, so we’ll have to buy some. It is a dark juice, not sure how readily available that sort would be in the stores.  Across the lake, the woodline catching the sun, reflecting in the water, is pretty.

Saturday 19th. Our guest made it back to Alberta, where, in her absence, spring had sprung.  A bus tour from Havelock NB and other locales stopped in this afternoon. The bus was full. The tour was organised by a ladies’ group who last organised a visit like this one about 25 years ago. The big bus pulled in the road just past our entrance, then rolled around alongside the monastery, which turned a few heads.

Sunday 20th. A family is here from Québec, sharing Pentecost weekend, a Mom, Dad and child.  The icons which are displayed in the Chapel according to the season have been hung on the walls of the Sacristy.

Monday 21st. We took off the big red door leading down into the kitchen and refectory, and replaced it with the wood-framed screen door, which is also red. The new week brought back friendly voices: our cook, plus housekeeping staff for the guesthouse.

Tuesday 22nd. It snowed here today. In Chapter, Dom Innocent spoke about the recent meeting of Canadian Superiors here. He showed us group photos from that week. He asked us to prepare a list for him of all the different tasks each of us presently has. Today he went to Moncton to see Brother Henry. Also to bring back plywood….our coffins are home made and we are down to one, so a friend wants to make us some more.

Wednesday 23rd. Brother Stephan’s vintage ten-speed is no longer working, so he found a bicycle that was unused. Steve had used his old bike a lot, including for quick access to work in the shop.

Thursday 24th. Dom Innocent was unloading the wood and other materials to the big carpentry shop which overlooks the grotto. You have to hope John knows his plywood coffins but I guess at that stage of the game it won’t matter much.

Friday 25th. Dom Bernard Lefebvre has sent a postcard to Dom Innocent. He introduced himself by saying he was the last Abbot of Bonnecombe, which founded us, and so the former Father Immediate to Calvaire, a community which remains in his heart and in his prayer to this day. Dom Bernard’s prayer presently is for the fecundity of Dom Innocent’s ministry; for vocations; and that the senior monks will continue life with courage and joy. Bonnecombe closed in 1965. Dom Bernard, now at Aiguebelle, is presently 95. 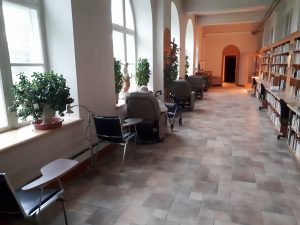 Saturday 26th. Brother Léo finds the dandelions pretty. The milk tank is now out of the milk house, ready to be picked up. A tractor is parked holding the tank on a wooden pallet.

Sunday 27th. Cell phones have been going off from time to time in Chapel. Some of today’s musical ring tones are not unpleasant. Some of the low noise settings sound a bit like a little owl: ooo, ooo. Dom Bede left after Mass for a one-month post-Abbatial rest at the Trappistine monastery in Whitland, Wales. They have no full-time chaplain, so his presence will also mean daily Mass for them.

Monday 28th. Mass with Tierce is without singing Monday mornings; it’s over before 8:30, generally. By that time, Bede had already made it to Wales. Photos of the community there suggest a happy spot. As is sometimes the case with monasteries, young faces stand out in a community where most members are older. All of them look as though they would have some interesting stories to tell.

Tuesday 29th. The sky was clear only along a thin edge of the horizon as the sun rose this morning. Later in the day, there was a brief sun shower. People want more rain. In Chapter, Brother Stephan explained how it may be necessary to put a heat wrap along the pipes leading from our back-up well to the monastery, since the dairy barn (midway) will not be warming things up this winter.

Wednesday 30th. Fresh fiddleheads were on the table this week. Lettuce from the greenhouse is now ready to eat. A new apple juice has been found to fill in for our own, from Vergers Jodoin.  Greenhouse and garden here are still assured by Dom Innocent, who plants outside again this year, after being made superior, but plants a bit less.

Thursday 31st. The inside of the former dairy barn is being pressure-washed; sometimes a bit of water comes flying out the window. A crew showed up to get rid of the piles of branches that had been created when NB Power trimmed, a while back. They fed the branches into a chopper. They seemed happy in their work.