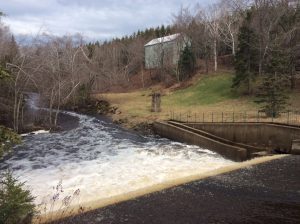 Monday 1st. The new Vespers books are making a good debut over-all. With every second Psalm now in English our Office becomes more universal. As the English is a version we’ve never sung before, we also gain a new way of breaking open the Scriptures.

Tuesday 2nd. The cats were seen with the ground hog, next to the garden. Sort of looking at him, which is something they’re good at. Might have spelled trouble for mister ground hog, but no, Innocent says they’re old acquaintances: they all climb up and down the same opening to the storm drain pipe leading to the lake; their get-away.

Wednesday 3rd. The eagle favors one tall tree on a corner of the lake, and from there this morning he was scaring a bunch of goslings. What was it all about? I don’t think he was shopping for lunch; maybe he was. The goslings dove under water and you could sense their fear as their dive lasted and lasted. 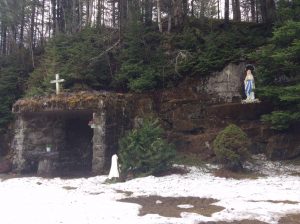 Thursday 4th. Rémi has been leveling out the dirt roads by dragging a heavy weight over them.

An old friend from Nova scotia has been in touch and said she knew about this chronicle, she’d been reading it. As we exchanged thoughts on various events and people it struck me that Nova Scotians in general have a little more moxie than most.

Friday 5th. Father Clovis arrives for supper still in his rain jacket and work clothes, some days. He has been working hard on the apple trees, protecting them from rot or bugs, trimming them as necessary. By asking local orchard managers what they do he has amassed a lot of know-how over the years.

Saturday 6th. Brother Glic’s absence has meant shuffling the afternoon milking duties, and this week there was a minor re-shuffle as farm activity picks up. Presently, Glic will leave Rome for Assisi for the last third of his studies.

Sunday 7th. Bruce Springsteen took seven years to work on his autobiography which we’re listening to as an audiobook at lunch, weekdays. It’s a good story he tells with ease and focus. At lunch today we listened to his music together for the first time, live performances plus his haunting 90’s hit, Streets of Philadelphia. 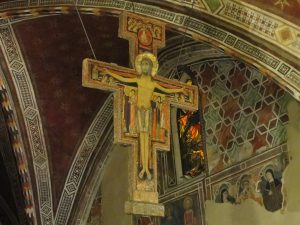 Glic’s photo of the crucifix that spoke to Saint Francis

Monday 8th. With sunny, warm weather for a day only, our barren flag pole seemed to be calling out for the return of its flag. Soon.

Lucien replaced some of the mats in the dairy barn this week. The cows sleep on individual rubber mats attached to the floor, covered over with peat moss. Fresh peat moss weekly.

Tuesday 9th. Mike who works on the farm got a drive into Moncton today to buy a used four-wheeler. The seller, a committed Catholic, had never heard there was a monastery here: a scenario which to this day is not unusual for us. The seller also happened to be a Prince Edward Islander. PEI’ers have a sort of mellow intensity.

Wednesday 10th. Two big trucks are on the move spreading liquid manure on our fields. The trucks have specially configured tires to avoid creating big tracks on the fields.

A little crew has been clearing the yard, preparatory to the arrival of professional tree-cutters, who will finish the work of dealing with damage from January’s ice storm. The fellows have also been picking up a few years’ worth of leaves from the ditch along the front entrance road. 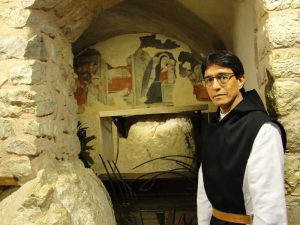 Thursday 11th. The daughter of one of our farm hands is now milking cows five days a week, and doing great. She has two goats at home.

Friday 12th. Like a beautiful green promise the lawn awaits a bit of sun and warmth to match it.

Saturday 13th. A heifer got free and went on a promenade this morning, checking out the grounds. Some say she was looking for Glic. If so, she will have to wait another month before she sees him again.

As is not unusual, guests quite different from one another arrive and get along. Some we have not seen for a year, others not for close to twenty years. 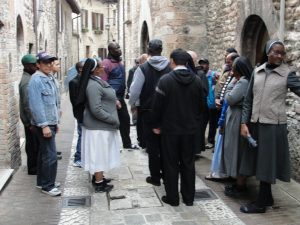 Glic and group in the streets of Assisi

Sunday 14th. Brother Henry made it up for lunch and Mass. He has not been able to get out to see his former hermitage for a while; soon. At lunch we reviewed news from different monasteries. As well we compared notes on the beaches of New Jersey, the English coastline, Florida and New Brunswick. 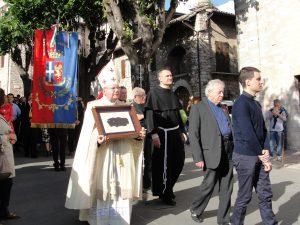 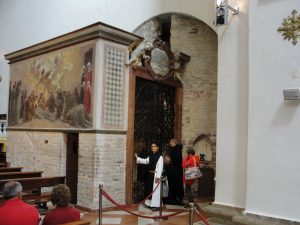 Glic at the place where Saint Francis died.

Monday 15th. On the community calendar, an announcement for early June: ‘Cistercian Students’ visit’ from Val Notre Dame. Because it is closest to Montreal, Val Notre Dame is a hub of sorts, including for Cistercians from overseas studying in Canada. Three such students, two Cistercians from France, one from Ireland will soon be by, accompanied by our friend Father Lucien of VND.

Tuesday 16th. When the very successful overhaul of the chapel/sacristy/scriptorium took place, the contractors unfortunately started laying tile too soon after pouring the concrete. Because the concrete was not completely set, a few tiles cracked. Those cracks are barely noticeable, but now one of the tiles is beginning to crumble.

Wednesday 17th. Half-way through May, we’ve already had more than the average precipitation for the whole month. Today Mr. Sun was at last catching up, and lawn mowing even commenced.

Also today, Father Innocent made his way to Saint John to serve as confessor at the annual Priests’ retreat there. 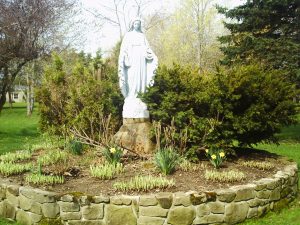 New Flowers for the Queen of the May

Thursday 18th. Unfortunately the Ford failed on Innocent, though he made it there and back all the same. Ford does not seem to be our lucky brand for pick-up trucks.

Today the cooling malfunctioned temporarily on the milk cooling tank. The folks who installed the tank made their way up here from Sussex and put things straight. Turns out a temperature sensor tucked under the tank malfunctioned. It is supposed to read only the temperature of the tank metal, but if a bit of condensation gets into the sensor’s housing the reading can go wrong, and the chill command will be incorrect.

Friday 19th. A cattle assessment was done this week, as part of the animal care standards being implemented in September. The cows were judged to be in excellent condition. As Laurie our farm hand said: skinny, they’re not. Their coats are often shiny, and I wonder if it’s the food they eat, or just natural for them.

Saturday 20th. Our good-natured accountant was in to present our 2016 financial statement to the community. This is a one-of-kind meeting for us and it lasted about an hour. One cost that has decreased was: groceries, and no one was completely certain why.

Sunday 21st. The chapel was full for Mass, as though perhaps a Mass in town had been cancelled. A simple response from the assembly and the feeling of what is best in the surrounding culture, its spirit, comes through. 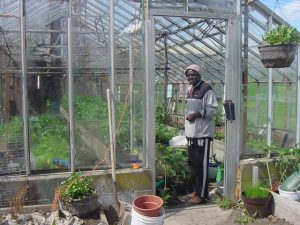 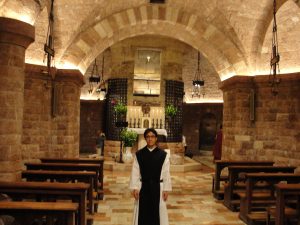 Glic at the tomb of Saint Francis

Monday 22nd. Before Mass, Father Clovis was having some eggs for breakfast in the guesthouse, where there’s a little stove for cooking. Clovis celebrates Mass at the Sisters at 8:30, a half hour after our Mass here begins. Not long after, there he was with two assistants, working on the row of prune trees next to the raspberry canes, next to the garden, next to the apple orchard.  While I was fetching the recycling bin from the road this afternoon a car pulled in next to me, with people eager to ask a series of questions: “What are you doing? How long have you been here? Were you called? Where are you from? What is there to see? … ”

Tuesday 23rd. Brother Henry’s younger brother Paul called him today. He has a New England accent, it brought back good memories. Henry has only the faintest accent, I guess because he’s been in Canada so long.

Today was Henry’s 35th anniversary of Solemn Profession. This got him a round of applause at lunch at the Dieppe residence, and congratulations from his fellow residents. They maintain a fresh involvement in life despite at times heavy physical hardships.

Wednesday 24th. A professor friend of Brother Léo’s was by on retreat this week. He gave Léo a copy of his most recent publication, which Léo set in to reading. The professor has the entire guest house to himself. Then on the weekend, a group will take up all the rooms: a rhythm which seems to be becoming regular here.

Thursday 25th. A bright yellow pollen has collected in the puddles. Like a fine dust or powder.

Friday 26th. In town today, rain was falling, the train was rolling, a few buildings remained on sale and someone was selling ‘fresh, local lobster’ from the back of his truck. I guess this would be lobster from P.E.I., this time of year.

Saturday 27th. During the night some cows took advantage of a broken rail to step out of the barn for a bit. It was a cold and misty night, not ideal for a stroll so by the time round-up began they were either back in the barn, though not in the right part, or trying to get back in. At the end of milking there were three left to milk, which was how it should work numerically.

Sunday 28th. A first apple tree has white blossoms. Inroads were made this morning on the raspberry muffins Simone cooked us for breakfast. At lunch we listened to Hank Snow. The inside cover of the CD says: ‘Visit the Hank Snow Centre in Liverpool, Nova Scotia’ so, that could be for any of our readers.

Monday 29th. Dom Bede has placed the icon of Pentecost, with its spiritual flames visiting the Apostles, in front of the ambo (lectern). At Vigils, we’re hearing read Patristic texts where the Holy Spirit is compared to: rain, but not just any sort of rain; sunlight, of quite a different kind.

Tuesday 30th. New windows for the second floor east were sitting outside the back door this morning, they sure are pretty. Not long afterwards a Roy Brothers team using a skyjack set to work switching new windows for old.

Wednesday 31st. Are the two fellows working on the windows brothers themselves? They get along well enough to be.

The corn has now been planted for the farm. The fields were wet, but Rémi says he’s seen worse. Other spring tasks await, one after the other, with the first cut of grass sileage not far away.