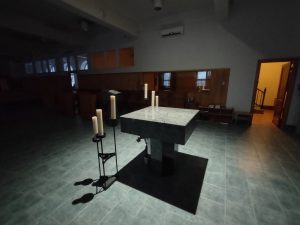 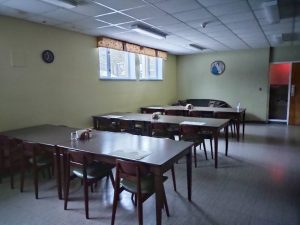 Tuesday 1st. In chapter, Dom Innocent presented questions for monks to answer; questions created by our order, to help prepare the usual house reports sent to the General Chapter, which resumes its meetings in September. The order’s hope with these questions is to bring out the positive in house reports. Each of us is asked to prepare two-paragraph responses, concerning life at Calvaire, which will be synthesized, a month from now.

Wednesday 2nd. In his homily for Ash Wednesday, Dom Innocent mentioned the Lenten meaning of lectio divina alongside prayer, fasting and almsgiving.

Friday 4th. Bede was to the Miramichi for an appointment, the mighty river there is still white and frozen, but not for long.

Saturday 5th. Brother Leo has found a book of Saints he likes, published a year before he was born, with an engraving for each Saint.

Sunday 6th. We had a seasonal chapter meeting after Lauds. Dom Innocent read to us chapter 49 of the Rule of Sant Benedict: on the observance of Lent, then spoke to us of our Lent this year. In his homily at Mass, Father Bede spoke about the joy of Lent.

Monday 7th. The monks sat down, each where they pleased in the long scriptorium, as Lenten reading got underway after Lauds. Repainting of the Chapel walls got underway once our stalls, and  plants, shelves, got pulled away from the walls. It was certainly time to spruce things up a bit. As things were removed, we could see books from long ago, such as the home-typed, photocopied and bound books for the Divine Office here.

Tuesday 8th. In Chapter, Dom Innocent offered insights regarding our thoughts, in the classic monastic sense of interior movements, and the process of sorting them out, dealing with them. Another day of painting got underway, arranged so as to leave the Chapel free at due times.

Thursday 10th. With health restrictions about to ease locally, some people are considering returning for their first retreat in a while. Our own protocol for entering the building will stay the same for now.

Friday 11th. Brother Stephan replaced some door handles which got pulled to pieces, on the door leaving the guest house for the Chapel corridor. Dom Innocent got away after None, beginning the road to preaching the annual retreat at New Melleray Abbey, Iowa.

Saturday 12th. Our search for a retreat master for our own annual retreat has yet to bear fruit, but someone has been found for us for 2023.

Sunday 13th. At lunch, we listened to Fabio Bonizzoni’s recording of harpsichord music by Geminiani.

Monday 14th. A guest arrived by the east-bound train; the train is closer to being on time than it once was. Painting of the 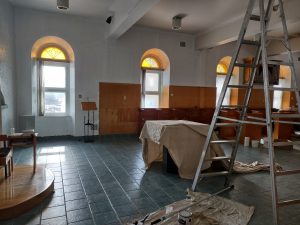 Chapel walls resumed. This work draws attention to the simple features of the Chapel. The Chapel looks much as it did when last renovated, in 1999.

Tuesday 15th. Brother Stephan has put out some hand-written letters to the community received recently, sharing a variety of thoughts and questions. Father Bede has sold out of honey at the door, but a new supply should arrive any day.

Wednesday 16th. Brother Leo is recalling taking part in childhood Novenas to Saint Joseph, held in Saint Joseph, near Dorchester, New Brunswick. The five mile walk back and forth each day, children found pleasant, he says.

Thursday 17th. We got some fresh paint for our painter. The ice overlay on our long entry way drive is gradually melting. As this area is shaded by parallel rows of trees, it takes a bit more warmth to change things there.

Friday 18th. Our new audio book is Pastoral Song: A Farmer’s  Journey, by James Rebanks. It sounds promising. Among the few guests we’ve had recently, two are published authors.

Saturday 19th. Father Roger presided a nice Mass for Saint Joseph. At lunch, we listened to part of the King’s College Chapel Guide to Bach’s St Matthew’s Passion: a tour of musical higlights of the piece, interspersed with excellent explanations. 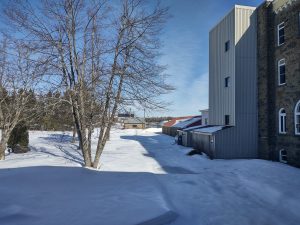 Back of the monastery.

Sunday 20th. Dom Innocent was back in time for Vigils this morning, despite freezing rain last night.

Monday 21st. No sooner do snow and ice cease to be a challenge for the dirt road leading to the poultry barn, than mud becomes the new one, but trucks navigated this first taste of spring successfully.

Tuesday 22nd. In Chapter, Dom Innocent continued his reflection on purity of heart, as achieved in part through self-knowledge, and victory over thoughts that assail us. Innocent attended a meeting in town this evening.

Wednesday 23rd. A visitor gave us a basket of little specially-baked breads. Dom Innocent is initiating someone to apple tree pruning, a work which begins this time of year, before all the snow on the ground goes.

Thursday 24th. Dom Innocent discussed preparations to host monastic visitors at meetings here in June. It still sounds as though we can hope to see the Abbot General present, accompanied by his secretary, of course. The last time our monastery hosted the Canadian regional meeting was in May 2018.

Friday 25th. The solemnity of the Annunciation is a welcome moment, each year bringing its own grace. It was a prayerful day, marked as well by meals prepared with care, and abounding with special dishes. At lunch, Dom Innocent mentioned how our Archbishop Valéry planned to offer Mass for peace today, at the same moment Pope Francis in Rome celebrates Mass to consecrate Ukraine and Russia.

Saturday 26th. The weather having co-operated, our one guest managed to get away. There are some future guests interested in Easter season here. The last two years, the guesthouse was closed for Easter.

Sunday 27th. For Laetare Sunday Mass, Brother Stephan’s organ added some light. Outside, it was snowing, but the robins were singing nonetheless. After Mass, Brother Leo stopped into the kitchen to salute the cook.

Monday 28th. At the door, as happens sometimes, our address got confused with the Trappistines’, whose name is of course so similar, and whose address is just a few numbers away. The recent snow, sculpted by the wind, has freshened up layers of older snow, visible in places underneath.

Tuesday 29th. We sat down together to review 2021’s numbers in terms of costs and earnings, to help get a picture of things. It was our first, full year with the new poultry barn and, accordingly, a simpler image emerges. As was the case in 2020, Mass intentions increased here.

Wednesday 30th. Brother Léo was taken aback by the beauty of the sunrise this morning, saying (as he does from time to time) “Well, well!”. For the first time this spring, we were able to sing Salve Regina, to end the day, facing a naturally lit, stained Glass Blessed Virgin Mary. When the stained glass was initially placed, in a window space long covered over, there was some resistance to it. People loved the statue we had there, which is now near the guesthouse’s Chapel entrance.

Thursday 31st. Our refectory book Pastoral Song, written by someone born in the mid-1970’s, offers quite a look at life in the 1980’s onwards, in England, farming. Like the previous refectory book, this one contains some remarkable nature writing, flowing in and out of the narrative.