Monday 1st. While February had none, March has several anniversaries for the monks, today being the day Dom Innocent began monastic life in 1987, later becoming a novice, and pronouncing his first vows on the same date.

Tuesday 2nd. There was a sub-zero rainbow under clear skies this morning after Lauds: an unusual winter sight. It may have had to do with high winds during and after the most recent snowfall, and was lovely. In Chapter this morning, Dom Innocent commented the Rule’s teaching on receiving children of noble families, or of any families. He also said there would be a meeting on Friday to bring the community up to date on the new poultry barn.

Wednesday 3rd. Our walk-in freezer is once again out of service, and the type of deep freezers found in most Canadian homes come to our rescue instead.

Thursday 4th. Our New Refectory book is Seeking Allah, Finding Jesus, by Nabeel Qureshi. This time, the author reads the book himself, and his voice and delivery are quite natural. He presents in a compelling way the beauty and challenges of Muslim family life in the west, where he began his journey.

Friday 5th. After Lauds, Dom Innocent reviewed the new poultry barn’s start-up with us, also looking back to the construction phase,  and how that turned out. The barn is serving well, and preparations for the arrival of flock number two are underway presently.

Saturday 6th. With the at times ampler readings, and more complete psalms, the quiet cycle of Lent, with all it offers, seems to take on renewed meaning this unusual year.

Sunday 7th. Mild winter weather brought folks out for photo shoots here…on our main entrance driveway. I guess they like the trees. With the local situation improving, the Province has decided to relax health measures as of midnight tonight. 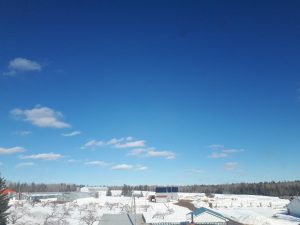 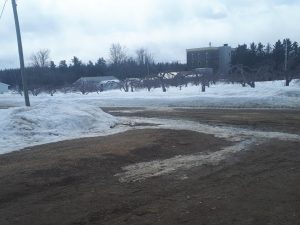 Monday 8th. Bede got the laundry underway, including cloth napkins for the refectory. The second flock of chicks arrived after dark and with some help from a small crew including monks, the chicks were shown to food and water, in a well-heated barn. It is a cycle that goes back a long way here, while some other cycles have ceased. Conversation in the barn revolved partly around Brother Leo, someone now largely unseen, but present in people’s minds.

Tuesday 9th. In Chapter, Dom Innocent commented the Rule’s teaching on receiving Priests who want to become monks, something which had different implications in Benedict’s day than in our own. Outside the basement windows, we now see not only cats but also technicians working to hook up our deep freeze again.

Wednesday 10th. Visible north of the scriptorium, a line of birch trees was showing white in the dawn light this morning. Closer by is the cloister area our late Brother Henry planted and landscaped, so that it would not be so bare.

Thursday 11th. Brother Stephan cleaned the corridor of the annex, which formerly served as a novitiate. It’s an area which receives quite a bit of foot traffic.

Friday 12th. As Father Bede was preparing things for Mass, he noticed a water leak. At first, the thought was that it might be linked to the heating; then, perhaps it was plumbing? But no, the leak was from the roof down the east stairwell. Thankfully, it did not go on for long. Bede feels that snow may have gotten under the roof, then eventually melted and leaked through the bottom-most roof layer.

Saturday 13th. One by one we are washing and saving up empty juice bottles from refectory, for use in bottling our own apple juice in the fall.

Sunday 14th. At lunch, we listened to Virgil Fox’s ‘Heavy Organ’ live album, which sought to introduce early 70’s rock audiences to Bach. The thundering organ brought back memories of afternoons at Notre Dame de Paris, for some.

Monday 15th.  The trees in our little apple orchard, relatively well sheltered by buildings and trees, are getting their annual pre-season trim.

Tuesday 16th. In Chapter, Dom Innocent commented the Rule of Saint Benedict’s teaching on receiving monks from other monasteries. He also addressed use and maintenance of our two cars. Steve did an oil change on one of them yesterday. A search is on for an additional  cook for us, recalling culinary adventures and interesting folks who accepted to feed us, years gone by.

Wednesday 17th. The grounds this time of year particularly are often very still, with an almost timeless feel, except when, for example, workers pass through towards the chicken barn.

Thursday 18th. The front door opens a bit more often now to let people in for confession. It is striking to encounter people anew, and learn again from them, in passing, what place the monastery has held in their lives. Mass attendance, the last few weeks, has been attenuated.

Friday 19th. It is always nice to pray and be together on the Feast of Saint Joseph. Conversation topics at lunch included Canadian monks serving in Europe, and the precise whereabouts of Via Casilina in Rome. Covid-19 Vaccines are now on the horizon, at least for our oldest.

Saturday 20th. Sign of the clear and windy winter it was, there are little piles of pine needles, cones and even wasps’ nests here and there on the snow, along with leaves from our pin oak that stayed on well into winter.

Sunday 21st. Alongside other subjects our oldest monk upon reflection considers a mystery, sleep states in humans, he now says, are a mystery. 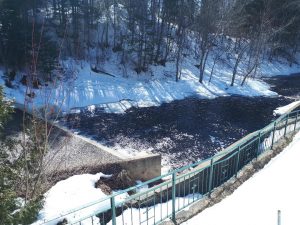 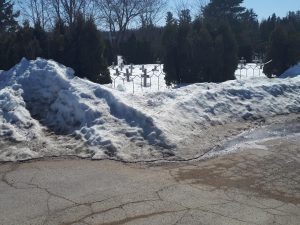 Monks’ cemetery behind a snowbank.

Monday 22nd. The road leading to the new chicken barn, which runs parallel to our long front drive, is a dirt road. It is now getting built up a bit, so that the barn is better served. Ground around the barn is also being firmed up to better allow business as usual.

Tuesday 23rd. We sat down together to review 2020’s numbers in terms of expenses and revenue, to help get the usual accounting  finalized. It was an unusual year as regards projects, both farming and domestic; unusual as well in terms of the closing of the guest house for a good part of the year. Less was spent on travel. Mass stipends have gone up quite a bit. Dom Innocent shared some news regarding the Order, decision taken not to have a General Chapter this year. News here: guesthouse to reopen in April, with limited numbers of guests. Confession in the guesthouse continues to be by appointment.

Wednesday 24th. Work has been underway, clearing away barn demolition debris that was put to one side before winter. We had pancakes at supper and some last drops of the unusually good maple syrup once produced by our own Sisters, across the road.

Thursday 25th. The Solemnity of the Annunciation brought us light, and joy. Bede was recalling similar weather conditions this day of his Abbatial blessing 18 years back, and the look of traces of snow in the fields.

Friday 26th. We received individual chocolate bunnies from a friend. A new cook tried her hand, and was acquainted with our set-up.

Saturday 27th. Singing practices for major feasts, as this morning’s one for Palm Sunday tomorrow, are also an advance taste of the prayer. Extra booklets and sheets for Holy Week are fairly easy to handle, and a thick booklet produced by Dom Alphonse in 1986 is still a reference in itself.

Sunday 28th. Always a gift to be able to begin another Holy Week. 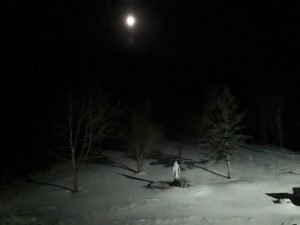 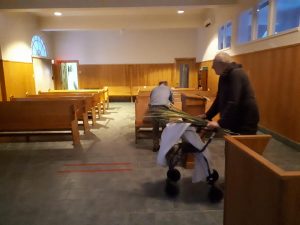 Monday 29th. The heating in the Chapel at times falls silent, as the weather warms, and the difference in acoustics as we are singing is striking.

Tuesday 30th. Our new cook is making her way around the kitchen with élan. With the passing of years here, and succession of cooks, a nice diversity in the homestyle cooking of Acadie is striking.

Wednesday 31st. The roof began leaking again this week, the water making its way down three floors to the wooden floor of what serves as a secondary sacristy area, alongside the Chapel. Today, a workman was visible way up on the roof, trying to make things a bit better. One day, the roof and unused stone chimneys on it will probably need a bit of a transformation, but for now we hope to pause a bit, as regards major projects.