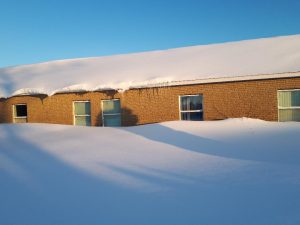 Sunday 1st.  Dom Innocent got smoothly in by train yesterday. . . between snows. He is happy with the way his travels went, and helped us into the season through Chapter, then Sunday Mass. 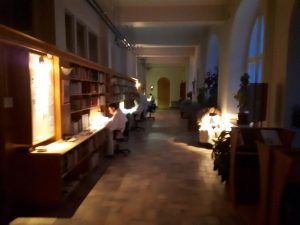 Monday 2nd. Lenten reading together began, after Lauds. One of the monks is reading a book called ‘The Age of Bede’. Another, the Bible.  Another, one by Pope Francis. Brother Leo is surprised at the numbers present at weekday Mass of a sudden.

Tuesday 3rd. In Chapter, Dom Innocent asked which monks we wanted to draft a house report for the upcoming Chapter of superiors in Assisi. Not simply the words, but the number of letters used in the report has to meet the Order’s standards of modesty: 3000. A little ‘house statistics’ grid tops the report; this time, unlike last, we have no deaths to report. Result of this morning’s meeting: Fathers Bede and Graham are to cook something up for the community’s consideration, regarding the period since September 2017.

Wednesday 4th.  Mild weather arrived in time for Brother Leo to step outside, which he now rarely does, and make his way to Newcastle. He says that March is his least favourite month of the year. May is his favourite. Conscious of the importance of not falling, in his nineties, his way of achieving this is to instruct Jesus not to let him fall, ever. 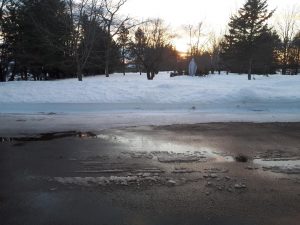 Friday 6th. Our book on the Trinity at meals promised spiritual exercises to try, and now they are being presented. One describes the art of taking prayerful walks, quite nicely; temptingly, so to speak.

Saturday 7th. Bede and Graham met to compare notes on the last three years, in light of a draft house report for the community’s consideration. Our new refectory audiobook ‘River of Doubt: Theodore Roosevelt’s Darkest Journey’ promises to offer insights on different levels, as it details Roosevelt’s decision to carry on up the Amazon, after losing the 1912 presidential election.

Sunday 8th. Outside the back door, the red shovel is slumped over, because snow has melted. The shovel seemed perhaps a little sad at spring’s approach.

Monday 9th. This week, the big tractor was brought back to us, repaired. The holy water font at the monks’ chapel entrance reappeared, its metal having been restored. The search went on for a suitable translator for this chronicle and though success is not at hand, at least it has meant interesting encounters.

Tuesday 10th. We looked over a draft version house report to be sent to Rome. How to report on three years of living, in a few words? I guess, as with painting a portrait, you can try to catch something actual, and important. The report passed muster here, and will now be  read by our Father Immediate to see what he thinks of it.

Thursday 12th. En route to Moncton to see Henry, the accumulated snow decreased to being nearly level with the road. In Moncton/Dieppe, Henry’s residence was under new restrictions because of the COVID-19 virus, but I was able to see him. In general, the mood was lighter there than in most of the city. Henry was in good sprits, and bemused by a film he was watching: A Summer Place (1959).

Friday 13th. Our accountant sat down to look at a draft financial statement for last year, as Steve noted, our first full year our of dairy. When this was finished, it was announced that tomorrow, our Mass would be changed slightly in keeping with the Archdiocese’s virus protection guidelines.

Saturday 14th. Mass with temporary health measures in place went smoothly, though there was a slightly news-struck mood to things.

Sunday 15th. Plenty of sunshine for mid-Lent. The international health crisis leaves no one indifferent, although from the cloister it is not always easy to separate media spin, plus one’s own filters, from fact. Today I spoke by phone with a cheerful hermit in Nova Scotia, who thinks that God wants people to become more like hermits,  making their way through the crisis. 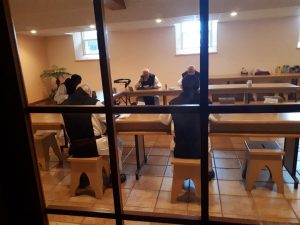 Monday 16th. I thought I saw the eagle, returned to the skies over our lake. Hard to say. Today we learned that Brother Henry’s residence in Dieppe is now completely closed to visitors due to health concerns. He is tucked away in a busy part of town, which not so many years back, was not busy at all.

Tuesday 17th. Brother Leo received a nice card from an old friend in the United States. We receive successive updates from the Archdiocese on health procedure, a nice reminder of our Archbishop and friend, Valery. In town today, where little was moving, some moving here and there but changed in their demeanor made me realise how much the simple joys of village life mean to people who are detached in just about every other way.

Wednesday 18th. Father Bede had to make a routine stop at the health clinic, where, as always, friendly faces awaited. A former retreatant now self-isolating as others are, wrote that as a meditation, he closes his eyes, and places himself in spirit in our Chapel with us, after Vigils.

Thursday 19th. To mark today’s feast of saint Joseph, we had a festive meal together at noon, and got into some salmon.

Friday 20th.  Brother Stephan re-plowed a twin route for the snow melt water to flow away from the guesthouse to the drain in the ground. Brother Leo is quick taking to heart things like crises in the world, and quicker than others to process the emotion, perhaps. As he tried to get his head around the Coronavirus’ long shadow currently, he recalled how, as a boy, people still spoke of the Spanish Flu that had gone through the province not long before his time. This week, as he rested (as he must) it was vivid memories of the adventures of Sport, the Leblanc family’s dog in the early nineteen-thirties, which especially kept returning. Some dogs are too good to forget. 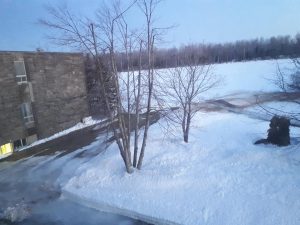 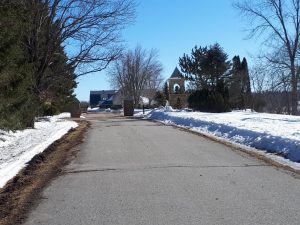 Saturday 21st.  Word arrived that Holy Week Celebrations for 2020 are now cancelled locally, due to the virus. This is normally a moment of more intense sharing of our Liturgy with our friends here, but will it seems be prayerful in a new and different way this year.

Sunday 22nd. Bede chose some striking Irish songs for us for lunch, a sort of catching up on Saint Patrick’s Day. This afternoon, the guesthouse and chapel and drive were quiet, and filled with good memories.

Monday 23rd. The list of guests from near and far who have had to cancel their retreat here, is like a short who’s who of different ways to love Christ, and his Church. Someone far away in the big city wrote in recently: “Would love to experience the peace of monastic setting, however this turbulence is a spiritual growth in itself.”

Tuesday 24th. Brother Stephan did some snow removal. Our cleaning person got in to the guesthouse, did some cleaning wearing a chic face mask and under this, a big smile. Dom Innocent, during Chapter meeting, announced there would be a liturgy commission meeting this week to discuss how best to organise Holy Week 2020.

Wednesday 25th. Brother Leo finds the sudden end of lay participation at our Mass, sad. Yet, he wakes up happy, still. He enjoys reviewing life’s great questions, reworking them. Today, it was the mystery of beauty. He says, the nose makes the face. 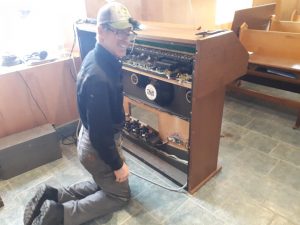 Thursday 26th. Brother Glic cleaned out the three-car garage, which houses the cars, then various grounds equipment in the third bay. Brother Stephan had a look at the chapel organ’s insides to see why it is not always working the same way. Earlier in the day, some microphone trouble arrived in the Chapel, turned out to be short-lived, happily. A neighbour was out walking the circle in front of the monastery, and, from a distance, and with great humor, saluted us.

Friday 27th. Our Archbishop called today and spoke to Dom Innocent, wishing us the best for Easter, and sharing news from Moncton. In town, virus safety procedures are in place commercially, in a sort of countrified way. In refectory, we continue hearing ‘River of Doubt’ read. Theodore Roosevelt’s preferred therapy for any woe, was a challenge, and this Amazonian expedition of his is so macho it would make the Village People blush.

Saturday 28th. Brother Glic pointed out to Brother Leo that the eagle is once again visible by times at lakeside.

Sunday 29th. The outline for Holy week celebrations was posted, and in essence it reproduces the Vatican’s 2020-only liturgical guidelines. As each Easter season has its own rhythm, or feel celebration-wise, this schema promises well. 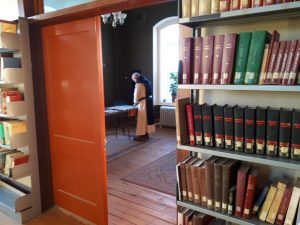 Fr. Roger in the reading room 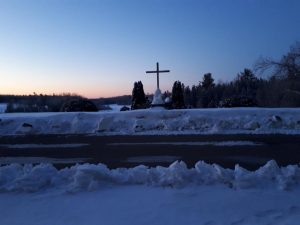 A cross-section of the snow build-up

Monday 30th. While we are doing Lenten reading together, the geothermal pipes emit soft gurgling sounds, and other sounds which are linked perhaps to less heat being used. The first caterpillar of the season was visible out back, today. Though he had a nice brown and black coat on, he seemed cold.

Tuesday 31st. Brother Henry’s residence in Dieppe keeps us abreast of how everyone is doing there, including emotionally: great, considering. The staff are attentive in all circumstances, without ever overdoing it. In Chapter today, Dom Innocent said that a list of duties for Holy Week would be reissued. A pre-pandemic list of which Priest would be doing what was drawn up in light of celebrations both here and at the Sisters, plus an Easter Vigil Mass here.