Friday 1st. The first reading at Mass was Ben Sirach, with highly-developed advice on human relations. With some outside Mass goers also in attendance, the mood changed a bit, just then. The silence seemed more alive, more personal. It reminded me of a Baptist friend who’d tried different Churches down south in the US, even other denominations and told me what counted above all for him in a Church setting was “a holy hush.”

Saturday 2nd. Brothers are standing in for Brother Leo with the meal trolley in the guesthouse. This is a job Leo says he inherited from Father Adelard by accident, one time when Adelard was late arriving at the trolley.

Sunday 3rd. Brothers Glic and Stephan have given our black metal candle holders for Mass a reboot, and this morning six new candles were in place, looking good. 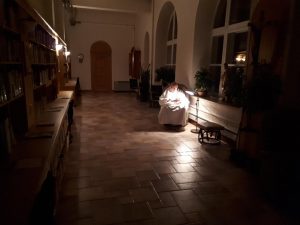 Monday 4th. Brother Stephan replaced the fuse on a wall-mounted geothermal heating unit, in one of our common washrooms. March break is on locally, and the mood in town is relaxed. Among the guests this week there was a small family from Quebec, which shares the same break as New Brunswick.

Tuesday 5th. Father Innocent gave Lenten Chapter. 2019 Lenten reading in common will be on Wednesdays and Fridays after Lauds. Brother Leo went to the village for a check-up with his family doctor; much to be thankful for, and much to go over.

Wednesday 6th. Ash Wednesday. A shipment of honey arrived at the front door this morning, and we were able to hear news of the owner of the apiary we buy from. At Mass today, Father Innocent spoke of the sense of our lives and actions before God, who alone is good.

Thursday 7th. I made my way to the Rogersville public library. It is within a school now closed, but still open not long ago. They were showing videos, and an older couple were taking advantage of computer and internet access.

Friday 8th. Bede got a new chair for the front office, where he happens to be often enough these days. Though Leo seems unchanged personally after taking a pause from his post, the office quickly began to look and feel different. Father Innocent travelled to Quebec by train today.

Saturday 9th. Brother Leo’s new room has a great view on the lake. He looks across for his eagle friend, but he is not there. However, a few birds seemed this week to feel spring was not far, and some of our little insect friends have reappeared downstairs.

Sunday 10th. Brother Leo has been having unusually nice dreams, and is keeping up on things. Father Bede treated us to some nice Italian songs about being Italian at lunch, this seemed to bring Rome and the Romans much closer. Rarely have I heard someone sing with such conviction about the proper way to serve pasta: al dente.

Monday 11th. Brother Stephan cleared snow from parts of the back yard, to enable water from the approaching melt to drain away from the building.

Tuesday 12th. Some guests have returned after twenty years away. They remember especially the Calvaire of the 1970’s and when one fellow began to speak of Dom Alphonse, he looked at me through eyes become young again. A truck full of chicks for our barns arrived today. Liturgically, we are taking a pause from singing at Mass this week.

Wednesday 13th. Brother Leo had an appointment in Newcastle today, and was delighted by the beauty of the town square in the sunlight.

Thursday 14th. News of her death having reached us yesterday evening, Father Bede offered Mass for Colleen Hasler this morning. Through her visits here she had been closely associated with us for many years, and as we prayed and lived today her example and person came to mind in a new way.

Friday 15th. Captive in Iran is the first audio book we’ve heard that is read by a woman, Patty Fogarty. She has her own way of reading so well, bringing the book’s story to life, as to make you forget at times the presence of a reader. 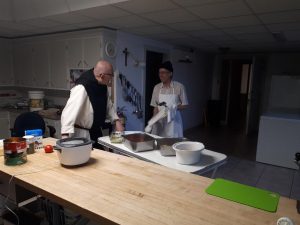 Bede checks with cook about how many guests for meals

Saturday 16th. The guest book is beginning to fill up with reservations for Easter week. Brother Leo today was remembering Novenas to Saint Joseph from his childhood in Memramcook. He would walk five miles both ways to the Church each day of the novena, with exemption from class for students making the novena.

Sunday 17th. Brother Glic went to the train station this evening to pick up some guests. Unusually for the westbound, the train was two hours late.

Monday 18th. Brother Leo was to the Miramichi for an appointment today, while Father Roger drove to Spryfield, Nova Scotia for the funeral Mass for Colleen Hasler. Roger made it back here the same day.

Tuesday 19th. Today, Saint Joseph’s, was Bede’s turn for a medical appointment, on the mighty Miramichi.

Wednesday 20th. The extra-mural nurse was in to say hello to Brother Leo, check on how he was doing, and discuss many things as well. We finished hearing read Captive in Iran. As the authors hoped, the book does walk you into everyday Iran, so to speak, and this is as important as their own story. Out new book is on happiness, and it is a collection of short phrases of Pope Francis’. The reader on the digital file, doing his best to transmit the Pope’s aura, sounds a bit like a relaxed and confident late-night DJ. 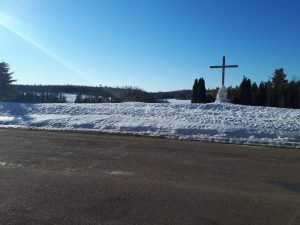 Thursday 21st. A young family are here on retreat, they sing well; and after Mass at the Trappistines today, they were able to see the Sisters’ host-making operation in full swing. The machine for baking hosts is from Lyon, France, and turns as it bakes on a series of griddles. The output is considerable. The smell from the baking is nice.

Friday 22nd. Bede today explained icons to our visitors. Bede’s mountain bike has reappeared near the front entrance, ready for any and all conditions this spring, this summer.

Saturday 23rd. A neighbour raises his own hens and we have begun buying eggs from him. Good stuff! The sight of snow on different parts of the big barn crumpling and sliding apart under the mildness, is reminiscent of the peace one feels seeing the sea at storm from a safe distance. Having young voices and young questions around, because of the family on retreat here, is a good reminder of many things, joy being one.

Sunday 24th. Work was done this week on the electrical system for the backup generator.

Monday 25th. Father Innocent got back from Quebec just after lunch today. He seems happy with the formation time, and is already shaking off the cold he caught while away. Brother Stephan saw to an issue with a hardwood corridor floor today, a sliver of wood had popped up.

Tuesday 26th. Brother Leo was to the Miramichi yet again for a follow-up appointment, which went well. In the waiting room he met a 98-year-old, who seemed quite spry. I guess six extra years lets you be even more bemused at it all, Leo is 92.  Leo returned to Offices in choir, and the common table today.

Wednesday 27th. A group is here from Campbellton. Warm people. Acadians from the north of the province seem to live in a slightly more colorful world, while Acadians from the south partly interiorise that color, as a quiet song they muse at.

Thursday 28th. With some help from a friend, Father Innocent has begun trimming the apple trees. He says you have to trim very early in the season. The vegetable seedlings he normally has growing in the greenhouse this time of year, someone else is starting up in their greenhouse for him, as his absence precluded his usual routine here.

Friday 29th. Plenty of sun and cool conditions have meant snow hardening, rather than melting at a go. The snow is more than hard enough to walk across without sinking, a joy for those who love the forest, as it gives the chance to walk freely there this time of year. 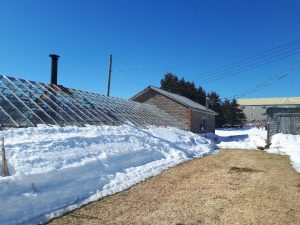 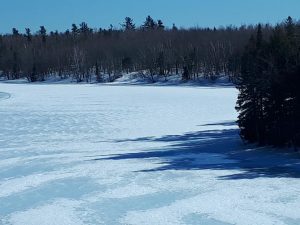 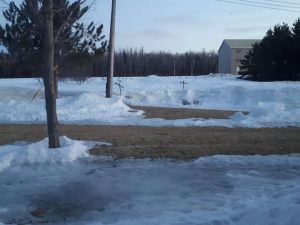 Saturday 30th. Winter receding here and there reveals on the ground: magic tree air fresheners from people’s cars; snow shovels and parts of shovels; empty Bud Light cans along the highway; empty cigarette packs along the highway, with horrible warnings from the government on them.

Sunday 31st. One of our oldest friends and neighbours along the highway moved away, their being there had been as sure as the morning star, we wish them well.