Thursday 1st. In the night, clouds slightly obscured the moon which, this night, will be full. On a clear night, the full moon can provide quite a lovely vista here, a little like in a storybook.

Medical wrappings were removed from the cows’ treated hooves this afternoon.

‘Sede vacante’ went into effect today, and we await the Father Immediate’s arrival Monday to help us through the next steps in finding a new superior. One of Bede’s last decisions as Abbot was to reconfigure refectory seating so that it now matches the seating arrangement in Chapel.

Friday 2nd. Brother Stephan gave Chapter this morning, and said a French CBC film crew will be here to film us singing during Mass next Thursday. They are doing a piece on choral music in the Province and will interview Stephan regarding Gregorian chant.

Some chickadees appeared this afternoon. When you have not seen them in a while, you forget how tiny they are.

Saturday 3rd. Bede alerted Steve to a bell malfunction on the third floor, which Steve set in to addressing. A little silver-colored bell up there is triggered five minutes before Offices, and Mass, and for end of work. One floor down, a musical door bell goes off instead. One can choose their melody: currently it is set to play the first notes of Deutschlandlied, the German National anthem, chosen because it was the least grating melody option.

At Mass this morning, Brother Stephan intoned Exsurge Domine as the Introit, or entrance hymn. This beautiful piece is also good practice for the upcoming TV treatment of Gregorian, as it is ‘the real deal.’

Monday 5th. Nothing’s quite like the gentle disorientation of ‘sede vacante’. Happily, we’re in good company. And being nudged by life is far from being simply a minus.

Maurice baked a cake today in preparation for a group of women who will be meeting and staying here this weekend.

Brother Léo was happy to see that the fluorescent lights in the serving area of the refectory are all working again.

Dom Clément arrived in time for Vespers, and seemed at home with us. Things like prayer, or goodness, you notice anew when a monk arrives from elsewhere.

Tuesday 6th. Clément gave Chapter and explained what comes next in the journey towards finding a new superior. First up, he will meet with each member of the community (today) to see what they think of the two options the Order gives us: an election, or Clément naming someone. Wednesday we’ll vote just on that.

Wednesday 7th. With bad weather on the horizon, the Anglican Women’s Study Group have had to cancel out for the weekend.

This morning’s vote—on whether or not to have an abbatial election—was consultative only, meaning that the Father Immediate takes it into consideration. For now, we are not having an election. Clément says he will return to spend some time with us after Easter, and may name the superior at that point.

Thursday 8th. The TV crew could not have been more discretely placed for Mass in Chapel, but such a thing takes a bit of getting used to each time; a mysterious ear, a big eye during Mass.

They were interested in and appreciative of it all, and very polite. After Mass, the filming of Brother Stephan’s interview lasted…an hour and a half! For this he was seated in the scriptorium, where there is lots of light.

The Sisters were by for a joyful lunch in honor of Bede, with even a cake designed to look like the exterior monastery wall, including red doors. In the evening we had mussels cooked in white wine, best mussels ever. At lunchtime, Clément showed us photos of his pastoral visits to the monastery of Nsugbe, in Nigeria. 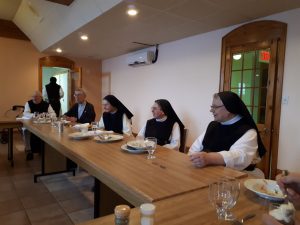 There was a sliver of blue in the sky this morning, a welcome sight after yesterday’s snow and before today’s. 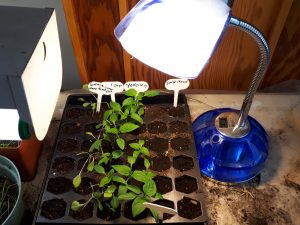 are off to a good start inside; soon the greenhouse will be a much 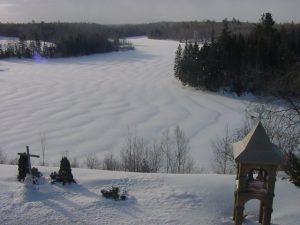 Sunday 11th. Our pick-up has difficulty backing up into the garage, over just a small bit of snow. 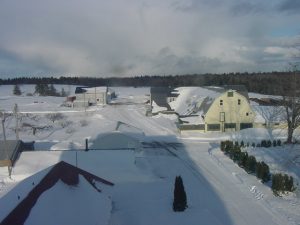 Monday 12th. There is a snowmelt puddle on the driveway big enough to reflect our bell tower against the sky. Our bell tower is modest; non-intrusive, even.

Father Roger was working on the chicken flock report today. At a precise point in the flock’s growth, data on the birds must be sent in to the appropriate government agency, and new forms have come into effect.

Tuesday 13th. A look back on the vehicle sign-out sheet gives a partial idea of what each of us has to do now and then: often enough it reads ‘village’; then Miramichi (less than a half hour’s drive), or Moncton (less than an hour’s drive). The Miramichi is an out of the way place that boasts a spectacular river for fishing, drawing big wheels of every kind. Marilyn Monroe at one point found herself tagging along on a fishing trip there, and experienced the kindness of strangers unaware of her celebrity. It’s not surprising that someone there would have such a one in for cake and tea. She’d looked cold, standing by the river.

Wednesday 14th. Overnight, quite the wind; quite the snow, showing by a snow drift how God is able to draw a perfect line. Well, at least as perfect as he wants. At the same time, days are growing longer, winter itself, despite the bluster, has been quieting. The calves, surrounded by white, under indirect light through the clouds seem prettier than ever.

Thursday 15th. A riding instructor has been by for a retreat, leading Brother Léo to recount how he’d once embarked on a horse, not knowing it was a “cheval western” and so got thrown immediately, landing in a ditch, unharmed.

Friday 16th. Lectio Divina together in silence is going well. It doesn’t hurt to be surrounded by care, for the written word, and for prayer.

John has begun re-flooring the rooms once occupied by 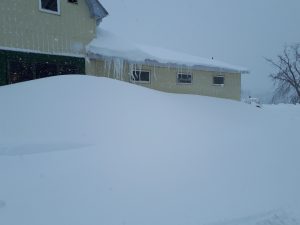 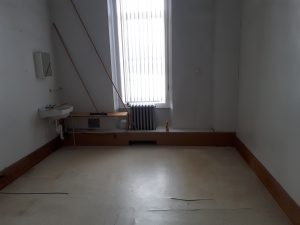 Saturday 17th. At Saturday Mass, we sang an abbreviated version of the same chant which was filmed recently, Exsurge Domine. Overall, Lent has perhaps the most beautiful songs of the year. At least, the themes and liturgical time lend themselves to very human, music and words.

Sunday 18th. Brother Henry was by today and had a look at the room which was formerly Father Adrien’s. The room’s crucifix is a maple leaf crucifix. Its four points expand to include the carved image of a maple leaf, symbol of Canada. Henry said that when he entered the monastery, this was the (atypical) crucifix on his wall. He was not sad to move on from there to other walls.

Monday 19th. Léa today was cleaning up the now-empty office of the Abbot, in the south-west corner. Monks were discussing issues with the internet connection here. It is both wireless and with cable, and recently some spots only can’t seem to pick up wireless.

Tuesday 20th. Temperatures soared to plus two today, sure sign of spring; more hopeful still is the heart of our Father Clovis, as he looks from up close at the apple trees; perhaps they’ll get a pruning these weeks. For supper this evening, we had pizza with vegetarian pepperoni. A new water filter in the refectory has turned the tap into a trick sink, which is kind of funny; too powerful a flow.

Wednesday 21st.  This fifth week of Lent, liturgical readings and prayers take on a geater intensity, opening the way for the sacred time wick will soon overtake us.  Bobby our technician explained: we need a new router for the internet. Hopefully the new one will provide a stronger signal, for guests especially. Brother Stephan says we will bump up the quality for this router. Bede and Innocent made their way into Moncton today. Bit by bit we are each getting used to the new car, with its new featu 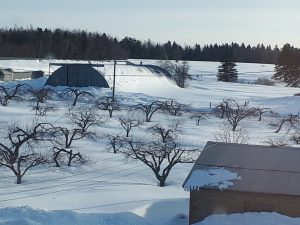 res, new technology. For now we have free satellite radio in the car.

Thursday 22nd. As other monasteries do, we have taken to washing all the breakfast dishes as one load in the machine, instead of little by little by hand. We are drawing near the end of David McCullough’s John Adams in refectory; it is a model of biographical writing. What he manages, especially, is to harmonize a sort of advocacy for Adams with dispassionate insight into the whole man, the whole presidency. This brings to mind Richard Ellman’s monumental biography of Oscar Wilde. Ellman tried not to take a stand on his subject. That, ironically, is the more obtrusive approach.

Friday 23rd. Brother Léo says the guesthouse is fully booked for Holy Week from Wednesday on. Unusual week in that regard. Some will be making their first retreat here. Others are old friends.

Saturday 24th. We had a singing class the moment Lauds ended this morning, in preparation for Mass tomorrow, as well as to go over celebration details, and specifications about which liturgical books we’ll be using when during Holy Week. While we were together, Brother Stephan mentioned that in refectory next week, we will listen to music in place of reading. 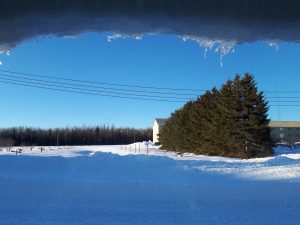 Monday 26th. At Lauds this morning, the back of the Chapel was dark except for a big light on for Father Clovis. Then, lights went on in the scriptorium for Lenten reading. The huge windows were giving off cold. It was close to minus twenty out.  Work continues on  second floor room renovations. In Maurice’s former room, three of his icons are still hanging on the wall, reminders of his personal spirituality, his journey.

Tuesday 27th. Some of the fluorescent lights are malfunctioning in the kitchen. Turns out it is not just the ballast but the fixture itself. Old: The General Electric Silver Series, with sort of an art deco label. Brother Edmundo is finding the late winter snow here striking: it is not the same snow scenario that played out before his eyes in Toronto.

Wednesday 28th. Freezing rain has closed schools today, hopefully it will not hinder guests from arriving. Brother Léo has discovered the works of the late Catholic philosopher Michael Novak, and really likes him. New notices regarding the liturgy were left at each of our places today, and these detail the nuances of the days of Holy Week, particularly as regards the Little Hours.

Thursday 29th. Circles are just beginning to form around some trees only, caused by gradual snow melt. The Holy Thursday Celebrations had a nice feel to them this year—in general, Triduum 2018 offered much to warm one’s heart—and Simone our cook got the chili ready in time to assist at Mass.

Friday 30th. As we did yesterday and will do again tomorrow, we had a singing practice / ceremony run-through, this one took a fair bit of time, but time passes quickly as we pick up on every detail we can, from Steve, from Bede also.

Saturday 31st. The young fellows who work on the farm Saturdays today had to walk their skid-doos over some mud, or drive gently, instead of gliding happily to a stop. At lunch, Bede read the martyrology for April 1st: Easter, and some very impressive Saints. This 2004 edition of the Roman Martyrology is not out yet in English; Bede has managed to render what we need into English.