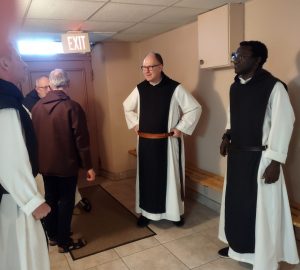 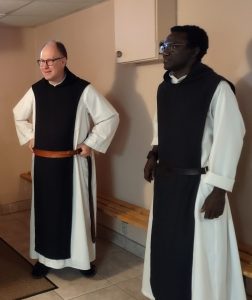 Wednesday 1st. Brother Leo had the first visit from family in a while, and enjoyed a cool Pepsi with them. Though Leo is second oldest in a family of seven children, he has outlived all but the youngest, Anna.

Thursday 2nd. A helper got the basement corridor tidied up, post-ceiling renovations.

Friday 3rd. Dom Innocent headed in to Moncton’s airport for our visitors, and they were back here for supper, and greetings all around, just before we said grace.

Saturday 4th. For Lauds, the Abbot General and his secretary, had places next to us, and the sung prayer dynamic grew. In Chapter, Dom Bernardus skillfully resumed his first four months as Abbot General, with the necessity of pulling up stakes at Tilburg, where he had been a monk for 36 years (Abbot for 16); a week’s course in Italian; 40 house reports to look through on his desk in Rome; visits to monasteries, and participation at regional meetings. He said he’d long dreamt of visiting Calvaire, but that only becoming Abbot General could make that happen. 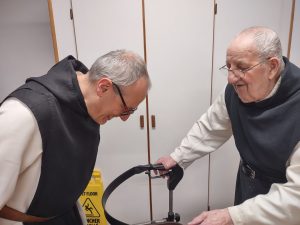 Sunday 5th. Having said Mass for our sisters yesterday evening, Dom Bernardus presided his second Pentecost Mass for us this morning, offering a highly appreciated homily, and, for the several who joined us for Mass, putting a face on the Cistercian family spirit.

Monday 6th. For the first Lauds of ordinary time, Father Bede drew on a CFC bidding prayer, which asks God to be present among  different sorts of people, ages, places, activities on earth, evoking them one by one. Dom Innocent and Dom Bernardus went back to Moncton, to pick up some more monastic visitors at the airport: Dom André, Abbot of Val Notre Dame, and Dom Marcel, former Abbot of Prairies.

Tuesday 7th. Brother Stephan got the big exterior bell working by disabling the small bell, putting its functional timer on the big one,  as we await parts enough for both. Brother Leo was remembering his father, Fred, today. Fred was goodness itself, Leo says. “La bonté même.”

Wednesday 8th. The pastoral meeting of superiors keeps them occupied, a lot of the day. At Mass, there are now 8 concelebrants around the principal celebrant. Our Sisters joined us for lunch with our guests today; a happy and hearty meal. Cook Simone came in to offer a word of welcome, and receive our thanks.

Thursday 9th. Dom Bernardus presided one more Mass for us, and offered us a word of encouragement, after the Prayer which follows Communion. Next came the community photo shoot in our scriptorium. Our visitors from the generalate in Rome were in great spirits. It is sad to see them go, but time waits for no one. Mid-morning today, the yellow school bus pulled up, and Nelson, NB students disembarked for a visit here, on their annual end of year field day.

Friday 10th. Next, our two Canadian flyers had to go, via Moncton, to Québec and Manitoba, respectively. Our Father Immediate, Dom Clé 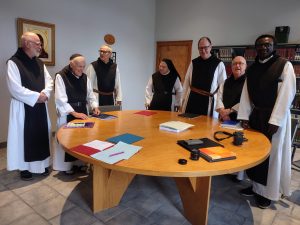 ment of Mistassini left by car.

Saturday 11th. Our visitors left behind gifts including icon cards of Saint Charles de Foucauld. the icon is written by one of the ‘Petites soeurs de Nazareth et l’unité’, in France. Charles once entered the monastery of Neiges in France, remaining there seven months.

Sunday 12th. The first solemnity of ordinary time, the Most Holy Trinity, was a nice way of integrating such a lively week behind us.

Monday 13th. The current community calendar, which is posted near the Chapter room, has now run its course: we’ve gotten through all that we’d planned for the first half of the year, with many blessings to show.

Tuesday 14th. Dom Innocent spoke to us in Chapter of the recent Canadian regional meetings here, updating us, and sharing his  reflections on the brief period of reunions, and meetings.

Wednesday 15th. Father Roger went to the Miramichi on commissions, as Dom Innocent got mowing in, on top of his other duties, and Brother Stephan worked at repairing the water leak from the drainpipe in our refectory wash-up area.

Thursday 16th. Sunlight gleamed off the metal feed silos today, as Rogersville got its own modest boost above seasonal temperature, to the joy of folks here. The descendants of Dom Antoine Piana’s relatives in France sent us some books as a gift, including a  collection of pieces on Bonnecombe Abbey and its surroundings, published by a local socio-cultural association. Bonnecombe founded Calvaire in 1902, and voted to close in 1965, after 800 years+ of existence.

Friday 17th. The extra-mural nurse was here, and from the corridor we could hear her happy, Miramichi accent.

Saturday 18th. Squirrels and dragonflies were well in evidence outside today. Dom Innocent managed to get a good deal of mowing in, before thundershowers began. 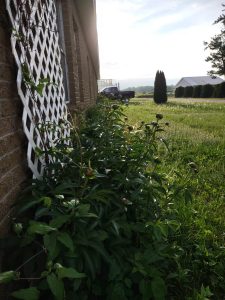 Sunday 19th. Corpus Christi is a day which always resonates with us, and we took time for a festive meal together, where discussion  ranged from the Pope’s health , to places in Canada and elsewhere; our founders’ first steps here; racoons…and at one corner of the table at least, Moncton’s Magnetic Hill, once again.

Monday 20th. A helper came in to do the regular cleaning in the guesthouse. Recent guests spoke highly of the welcome they received here, principally from Father Bede.

Tuesday 21st. Dom Innocent took some photos for use on a vocations website.

Wednesday 22nd. Father Bede got out for early morning blood tests. Brother Stephan removed one of the glass guesthouse doors, to see if he could arrange things so it will fit better. At present, the mosquitoes are slipping past it.

Thursday 23rd. A nice photo portrait of the new Abbot General now hangs in the scriptorium. It was taken in our Chapter room. 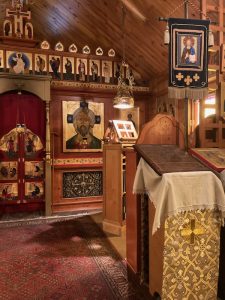 Hermitage of the Annunciation

Friday 24th. One of the monks is taking a hermitage day. Though we have two hermitages on the property, only one is occasionally used by us.

Saturday 25th. A friend wrote in from ‘the Hermitage of the Annunciation’, on the LaHave River in Nova Scotia, which has a lovely wooden chapel. This is an Orthodox Church community. It grew out of a small cell of monks in Halifax who at one point visited us here, and told us about their life.

Sunday 26th. Brother Leo has begun reading another book: Michael Novak’s Confessions of a Catholic. This weekend, Dom Innocent attended the local High School Graduation. Our bursary this year went to a Chiasson. The graduating class in Rogersville this year numbered eleven.

Monday 27th. With the superiors’ meeting over, the chapter room has been reset for our regular routine, and the sculpture of Inuit standing together in a circle is back in the middle of the table.

Tuesday 28th. In Chapter, Dom Innocent turned once more to considerations of chapter one of the Rule of Saint Benedict, on the types of monks. What kind of monks we’ve become—or could become—in the monastery was the theme today.

Wednesday 29th. Clouds of mist rolled along the lake’s surface this morning, east to west. Near midday, our troops assembled and made their way across the highway, to visit our sisters. It was our first time praying with them and sharing lunch with them in their new home; our first visit together to them in two and a half years.

Thursday 30th. The Abbot General is back in Rome, after his one Canadian stop here, then visits in the US, then one stop in Spain.