THE ICON FOR CORPUS CHRISTI

Tuesday 1st. A year ago today a series of two demolitions began here. It is so quiet now, that it is as though nothing had ever disturbed this.

In Chapter, Dom Innocent read the Chapter of the Rule on choosing a Prior, then considered the many ways ‘prior’ and related titles have been used across the different Religious Orders.

Wednesday 2nd. Brother Stephan put up the hammock we received as a gift several years ago, never having gotten around to using it. It is hanging not far from the flagpole, out front. Bugs are worse than usual this year, so potential hammock types may be few for now.

After a considerable lull in enquiries about booking a retreat here since the guesthouse last re-opened, Bede is now beginning to field more requests.

Thursday 3rd. There was an unusual noise across the lake, behind the grotto today. Brother Stephan was using the bush cutter to re-open an unused trail, which runs down to the lake. Brother Leo managed to finish reading the big, Newman biography by Louis Bouyer, and has begun reading Henri Bremond’s book Sainte Chantal.

Friday 4th. Brother Leo received in the mail a sort of homage to Brother Henry, from Québecois friends from Léo’s days as guest master. This evening, he was admiring a rainbow, which followed a sun shower, and for a bit was a double rainbow.

Saturday 5th. For Communion Music on organ, Brother Stephan chose and built upon one of the most familiar of modern Catholic h 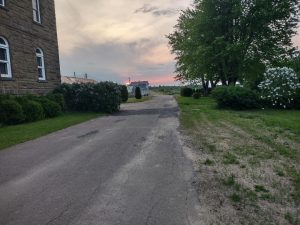 ymns, You Are Near, demonstrating that a well-built hymn never runs out of musical value.

Sunday 6th. Corpus Christi brought light of its own, once again this year, and we shared a festive meal at lunch.

Monday 7th. The council met this morning. Brother Stephan placed some air conditioner in guest house rooms, the last few days. A timely move, as temperatures outside have climbed unusually.

Tuesday 8th. A retreatant booked in. Actually having a retreatant praying with us at Vigils, is a  bit like having an extra light on things. Brother Stephan made his way south-east of here in New Brunswick today, to Sackville.

Wednesday 9th. An elderly couple we don’t often see these days managed to attend Mass together here today. Red tail lights in the distance indicated that the shipping was underway at the poultry barn tonight, as temperatures dropped to nearly zero.

We see racoons at times just outside our window — always energetic — and this week I saw a young coyote briskly trot past the car garage. Happy would not be a word that would come to mind to describe mature coyotes I’ve seen, but this fellow did seem happy.

Our refectory book is on to the dawn of the Second Vatican Council, as Joseph Ratzinger experienced it. So many times this historical subject has come up, in refectory books, and it still seems a partly untold  story.

Friday 11th. Hauling out the tallest ladder, our friend John installed a new kind of light bulb in one of the Chapel fixtures,  bri 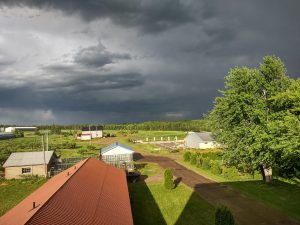 Saturday 12th. A sizzling sound this afternoon indicated that Father Roger was preparing a nice omelet for supper this evening.

Sunday 13th. At lunch, we listened to Roy Rogers sing songs such as Sweet Hour of Prayer. This afternoon, Bede rolled out his three-wheeler for a spin in the sun.

Monday 14th. We had some turkey eggs, with bright yellow yolks, with supper.

Tuesday 15th. In Chapter, Dom Innocent commented on Pascite Gregem Dei, Pope Francis’ document promulgating revisions to Book VI of the Code of Canon Law, on Sanctions, in light of the universal need for protocols to help communities handle offences fairly and justly.

Today is the twentieth anniversary of the passing of dear Brother Anthony Opisso, who for decades stayed alongside the monastery in different hermitages, without being part of the community. Only a few days ago I met someone new, who at the mention of the monastery, spoke of Anthony, and their lifelong bond with him. Along with his other accomplishments, he was a medical doctor, and at one time practiced medicine on our behalf.

Wednesday 16th. A long truck arrived this morning, with a crane, to pick up some scrap metal we are selling. The operator was a bit surprised to see kittens jump out of the scrap pile.

Thursday 17th. New Brunswick took steps this week to relax health restrictions slightly. It is another new moment, which seem to say  different things to people’s hearts, many months into the global crisis.

Friday 18th. The power went off briefly this afternoon, and the  generator started up nice and smoothly. The farmers using our fields cut hay equally smoothly, swathe after swathe. 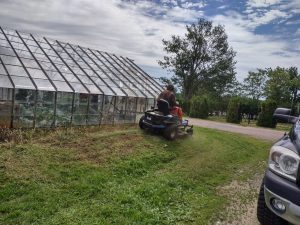 Saturday 19th. Dom Innocent got a lot of lawn mowing in, before the afternoon rain. It poured briefly, and under thin clouds, the mown fields looked white.

Sunday 20th. At 94 and counting, Brother Leo continues to rise for Vigils followed by a kingly breakfast, and private prayer of the Stations of the Cross.

Monday 21st. Someone whom we’ve known for quite a while was by for a retreat, one of the few whose retreats here stretch back over five decades. It is interesting to hear her perceptions of us, things we ourselves might not notice.

Tuesday 22nd. After Lauds we left Chapel in procession as usual Tuesdays, for chapter, through the scriptorium. The nine-foot high windows there face north, and this time of 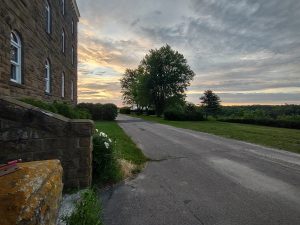 year they give sunstantial light. In chapter, Dom Innocent reviewed recent changes to Canon Law, pursuant to last week’s presentation. It was a chance to think about, and catch up on different questions facing the world today. Next, the subject of leaving our cowls aside for summer arose. The 24th will be the last day we wear them for Lauds and Vespers, for now.

Wednesday 23rd. A Trappist Preserve flavor which does not cause much of a stir, Quince Jelly, found a purchaser at our store this week: someone with their own quince tree at home.

Thursday 24th. On a trip into town for his second Covid-19 vaccination, Brother Leo r 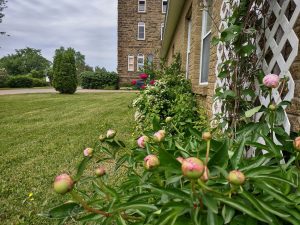 emarked on the loveliness of dandelions, and the fine look of today’s trucks. People gathered for the same reason revealed a different face of Rogersville, or rather, faces new to us  and kind.

Friday 25th. This morning Brother Stephan topped up one of our bird feeders, near the Pieta. Dom Innocent was working in the greenhouse, then watering plants which grow right along the greenhouse’s exterior.

Saturday 26th. The Chapel got some more of the updated lighting, brighter, but also pleasing to the eye. 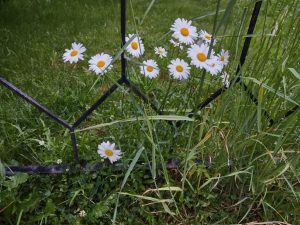 Sunday 27th. High school proms have become a very big phenomena, and yesterday was a prom photo blitz out front, with young couples, and their spectacular vehicles.

Monday 28th. Chicks arrived today, for the fourth poultry cycle of the year. At lunch, we ate some arugula grown here, strong and tasty. We are being spared the heat wave afflicting friends near the country’s other coast.

Tuesday 29th. In a small window on the second floor facing west,  a light in the chicken barn was visible last night. Today a young racoon climbed up to a bird feeder smaller than him and gave it a try, but discouraged with the meagre food he found, he climbed back down.

Wednesday 30th. Rainier and colder out, our lawn chairs have been tossed by the wind. 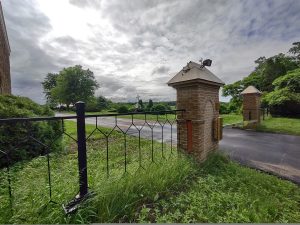