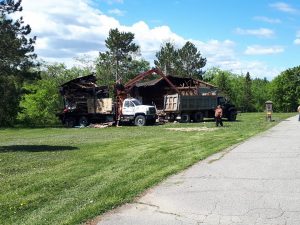 Monday 1st. Cars drove in one by one this morning, nice and slow, carrying different demolition crew members, young people with happy  faces; older people with peaceful, attentive expressions. Demolishing the cannery meant our first removing what was valuable or useful inside, and that filled a long trailer. Other contents of the building were trash to some, but not to others.

Tuesday 2nd. In Chapter, Dom Innocent commented the Rule of Saint Benedict’s teaching on faults committed outside the liturgy, as well as on faults committed in secret, bringing out the community/individual dynamics involved. News arrived that phase two of onsite demolition—the former dairy barn—would also begin today, with the exterior cladding being removed. The crew is able, and the foreman knows how to direct things.

Wednesday 3rd. At lunch we had first lettuce from our greenhouse this year, in a nice salad. We also enjoyed a fresh rhubarb desert. Metal roofing was removed from extensions to the dairy barn.

The ResultsThursday 4th. The demolition of the cannery has also acted as a sort of archeological excavation of a site with different stones; a site which has served the monks in different ways across a century or so.

Friday 5th. The week saw many loads of gravel trucked from our quarry southeast of the monastery to the site of the future poultry barn, raising lots of dust and putting our dirt roads to the test.

Saturday 6th. Dom Innocent, duly protected from the bugs, got some lawn mowing in before a light rain began.

Sunday 7th. Our new refectory book, “Call the Nurse”, is the story of a family as they try switching from life in London to life in the Scottish Hebrides, in the early 1970’s. Beautiful as the new setting would be, takes a special family.

Monday 8th. Brother Leo was remembering Abbots Emeritus from far and wide who lived here temporarily in years past after retiring from their office: remembering their goodness, their faces, their manners. As the new week began, ground was nearing readiness for construction  on the new poultry barn site. 900 truckloads of gravel were needed for the site. Meanwhile, closer to the monastery, the former dairy barn has been emptied and decommissioned. It is now possible to look straight through the hay loft which forms the top floor of the barn. Brother Stephan is wondering what to do with the plastic owl which perched over the high hay loft door. Initially, it swivelled in place and screeched, discouraging other birds such a pigeons and starlings from coming around. However, before long these caught on to the trick.

Tuesday 9th. Dom Innocent in Chapter reviewed some of the prayers and functions at Mass. Out back, Brother Stephan has started widening woods roads with a tree branch limber that cuts branches up to 16 feet high. Innocent has planted two pear trees, one is “triple-grafted” producing 3 different varieties of pear.

Wednesday 10th. The boom gate, which only days ago raised and lowered at the touch of a button, is now in the emergency department of the garage and has to undergo re-alignment surgery. It took an unexpected hit recently while it was in the raised position.

Thursday 11th. Encounters with onlookers peering down into the ruins of the cannery this week, provided a chance to learn about new urban, or in this case rural myths regarding the monks. It seems there is no end to the imaginative possibilities.

Friday 12th. Brother Leo has been discovering with enthusiasm the writings of Saint Catherine of Siena: her letters to laypeople. Equipment to be installed eventually in the new poultry barn arrived by transport truck this week, and was stored.

The new poultry barn begins to rise.Saturday 13th. The two Green Ash trees Steve transplanted last year have taken to their new homes, and now have bright green leaves. The digging for the footings for the poultry barn is now done, and the  footings are going in. 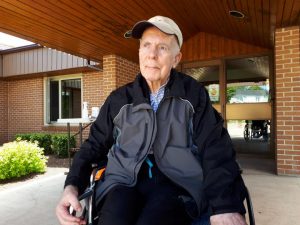 Sunday 14th. For the first time in almost three months, our Mass was open to a limited number of laypeople, which was a joy. Access for five is the way now, and four were present along with us this morning.

Monday 15th. Brother Henry saw one of his specialists at the Dumont Hospital today, all looks good. While we were together today, Henry was evoking the importance of gratitude in his life, and in life in general. The driver for the access van was evoking many aspects of the city’s life today, yesterday, and across recent years. “The world is upside down”, he said, “that’s why it is important there are monks.”

Tuesday 16th. Demolition of the dairy barn is at times at least a quiet enough process, a few pieces at a time; a last chance to appreciate the fine lines of the construction. In the distance, the site of the new poultry barn becomes a scene of impressive activity, then grows quiet again for a bit.

Wednesday 17th. The Sacrament of Reconciliation, by appointment, has begun again. Rediscoveries, familiar faces, often show up a positive side of life, obscured by news and isolation.

Thursday 18th. Father Bede received a fresh load of honey to sell today. Brother Leo went out for a look at both demolition and  construction. The former dairy barn first began to see light the same year our Leo Leblanc did: 1927.

Friday 19th. At lunch today, Father Bede put on Puccini’s Messa di Gloria for music. The repaired boom gate re-appeared in place, and once again opens at the touch of a button. Dom Innocent is giving a retreat via computer, to a religious community a few Provinces west. 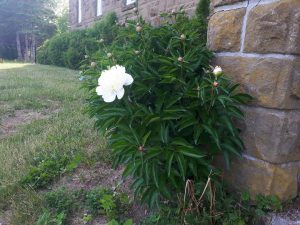 Saturday 20th. Mass went along quietly this morning, no singing, even, then suddenly we heard a crash. A halogen light had exploded, sending glass shards flying. It was one of two halogen lights which provide light for the presiding Priest, happily this happened only after he had advanced to the altar. Now we will consider some more modern lighting options up front.

Sunday 21st. Brother Stephan prayed for rain today. Outside, some fields are almost the color of beaches. Temperatures reached nearly 38 degrees this week.

Tuesday 23rd Father Roger washed the kitchen floor this afternoon. Father Bede continued work on the laundry. Brother Steve mowed lawns, and trimmed several trees, also clearing away the undergrowth at lakeside. In Chapter this morning, topics included readying the guesthouse for eventual guests, and leaving aside our  cowls for summer season. 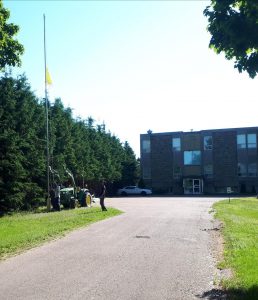 Wednesday 24th. Dom Innocent and Brother Stephan lowered the flag pole manually, freed the flag which had been caught up, then raised the pole again using the tractor, and secured it in place.

Thursday 25th. With the cannery building gone, the view south is opened up for the first time in quite a long time, and I was not expecting it to be so pretty, in terms of trees. In the distance, the little decorative entrance to the stairways down to the grotto is also visible.

Friday 26th. Though there are five spaces available to the public for Mass here each day of the week, we are not a full house each day.    We had lots of melon at table to help stay cool this week, we have also been tucking in to fresh lettuce grown here. Tomatoes are not far behind.

Saturday 27th. For the first time in a while, there was a slightly cooler feel outside. Inside, Brother Leo was getting exercise by doing a few laps of his corridor. He said that the dairy barn now, he is not keen to look at, he never thought he would see it in such a state. The fellow doing the demolition seems to know just how he wants to proceed, step by step. One unusual feature which awaits removal is the buttressing added to try to keep the barn from tilting over. 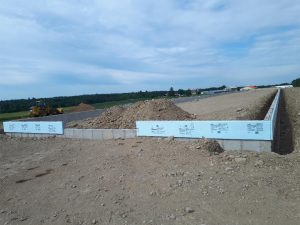 Sunday 28th. Work proceeded on the foundation for the new poultry barn this week; and monastery security lighting blinked on, on the one side that was left to be done. Surprising how small the fixture, giving such a light.

Monday, 29th. For the feast of Saints Peter and Paul, Father Bede created a Rome-related lunch music playlist, which gave the feel of being in Rome. Simone our cook cooked up battered shrimp; next day, she would serve us oysters.

Tuesday, 30th. In Chapter, Dom Innocent mentioned his hope to create a new TV area for the monks to share time in. Previously, we made our way down to the annex, and for a while had regular videos there for those who wished. Interest fell off; older members of the community found the room difficult to access. As well, the now-vintage TV tube has begun to fade.