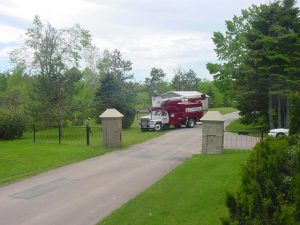 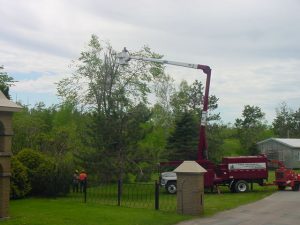 Thursday 1st. I congratulated one of the workers on a nice job, and asked his family name: MacIssac.

Our monastic guests arrived in time for Vespers. Dom Bede slid in some extra stalls. Suddenly, our common prayer received new vigor. Drinks were served with Supper (a chicken fricot) and a fellow from France was able to experience the gustatory tingle of Moosehead, a beer which demarks NB culture. He said it was good.

Friday 2nd. Steve rented a big tractor, from PEI, to help boost the accomplishment of the seasonal farm chores.

Considering that the monks and nun in choir are now from more than a handful of communities the sound in choir is good, better than at similar moments for us in the past.

Saturday 3rd. For prayer and friendship and a marvelous meal, Dom Bede cycled to the Sisters, frère Lucien drove the monastic guests over, others went in our two vehicles. After lunch, we got to greet JJ, the happiest dog in the world.

Sunday 4th. Brother Henry was here today, and looking out the window towards the greenhouse asked “is that a dog?” It was a cat, a big one, from our barn. More importantly, Henry also saw our monastic visitors today. He arrived just as they were getting in their car to go. Rwandan, French, Irish, Canadian.

Father Innocent’s home-made apple wine made its debut at lunch today, to favorable reviews. As it was made from Clovis’ apple juice, some wondered if a label for the bottle shouldn’t feature Clovis and our orchard.

Monday 5th. Clovis has gone north to see his family; first time since Christmas. At dawn his red Ford was not in its usual place in the guest-house parking lot: a strange sight, just trees and pave. In chapter Glic’s chair also remained empty, but not for much longer.

Tuesday 6th. My Mom regrets having planted her flowers before mid-June, because of the cold. Father Innocent was resourceful: this year he planted his garden melons in the greenhouse, to give them a start safe from the cold, then outside they go.

Wednesday 7th. The tree cutters were here and efficiently cleared away the remaining storm-damaged branches. They had an ‘eager beaver’ attached to the back of their truck, and this would grind up any wood they fed into it.

Father Clovis returned this evening, he was happy and eager to get back to work on the apple trees. The next step is to protect them from fungus with a mild fungicide.

The cool (or cold) is easing, and with this change the smell of the pine trees is more able to be carried through the morning air.

In his book Born to Run which we continue listening to in refectory, Bruce Springsteen has been describing the meticulous work that went into getting the rough sound of his 1980 album the River.

Friday 9th. Our cook has made some nice jelly rolls for desert.

Father Innocent managed to cut a swathe of the tall grass (and dandelions) next to the garden, before the rain began. The ride-on is rated for 800 hours, that’s it’s life! It is at 400 hours now.

Saturday 10th. A starling was bathing in a long rainwater puddle as day brightened.

We’ve learned of the death of Mother Agnes of Wrentham, Abbess from 1986 to 2008. It is hard to believe someone as strong and gentle as that is gone.

Sunday 11th. “Only five for lunch plus one guest, not a lot”, said our cook Maurice at lunch-time. Bede had just set out for the monastery of Conyers in Georgia for meetings. Moments after Maurice spoke, the loud alarm bell went off: fire in the electrical room! The power was shut off, causing the fire to stop, and Junior Babin rode to the rescue. The smoke was from a a blown switch, soon to be replaced.

Monday 12th. Ordinary Time, with its nondescript routines and simpler celebrations, is a nice reminder of monks now passed.

Buttercups have appeared on the lawn here, and June bugs cling to the brick walls. Were there this many June bugs last year?

Mosquitoes really take to monastic life and are often present at the divine office, or for meals; floating, singing their little song.

Tuesday 13th. There was an electrical storm before Lauds. It came close to the monastery, then gained a few miles quickly. One bird sang during the storm, many afterwards.

The farm seems quieter than usual these days, because things there are actually less quiet: much more work in the fields.

Wednesday 14th. As Father Doris set out to raise funds cycling across Canada, his replacement for the next month arrived to reside here in the guest house as he serves two Parishes. He is a young Redemptorist from Saint Anne de Beaupré in Québec. I said “it’s nice around here if you like plenty of countryside” and he pointed out that Saint Anne and area is good from that point of view, too.

A second, Moncton Parish Priest is here on retreat. I think he might hold the local record for being moved: 43 postings in 23 years.

Thursday 15th. A group of Anglican future ordinands are here for their retreat, Ordination is on Sunday. It is great to see their joy.

Friday 16th. Twelve in the guesthouse for lunch; that’s a sizeable number for us.

The distant hum of the lawnmower, at silent prayer time, is not unpleasing.

Saturday 17th. The farm workers have been greatly interested in Brother Glic’s return. Glic formerly worked for Lafarge, then took to milking cows…and cows…and cows when he entered here.

Glic re-appeared in community for first Vespers of Corpus Christi, not a bad way to start. He brings joy and strength, and obviously weathered three months in Italy quite well.

Sunday 18th. A former boxer drove up to the barn looking to buy some hay for his horses.

Brother Léo was talking about the day’s solemnity this morning and recalling Eucharistic processions (in Village des Bois, Memramcook) which would last a mile. Then a tiny chapel for adoration.

Monday 19th. A young fellow from a few provinces west is here for a retreat. It was what the British might call ‘sultry’ here today. The fellows on the farm stop, but not for long, to take in a little bottle of cold water.

Tuesday 20th. Lucien was out early this morning, slowly riding around the three-story chicken barn on the mower. This barn is on a slight rise. It is plainer than our old, wooden dairy barn.

Thousands of pounds of peat moss from Bay Saint Anne were delivered today. It comes in huge, white bags and will provide cow stall bedding cover.

The power was shut off this morning in order to allow two technicians to  complete repairs remaining from when an electrical switch was blown recently. Both of them seem to work all the time.

Wednesday 21st. The sound of Mike’s four-wheeler could be heard as we were in chapel this morning waiting for the bell. He pulled up to go downstairs and punch in for work, then drove away. Sounding good, and fast. The scene inside and out would make a good Honda commercial.

It rained this afternoon then became sunny right away; seems to be a new pattern. By bright evening things were getting dry and tiny yellow birds were drinking from long rainwater puddles on the pave, one peck at a time.

Thursday 22nd. Every morning is a good morning for the swallows, as they whip through the air, looping, eating. Silhouettes of the cows were visible as they grazed in the summer pasture, a short way from the barn. Outside, you appreciate better the size of them.

Friday 23rd. Bede got back yesterday afternoon, and spoke to us this morning of his meetings with the US superiors. Bede experienced a flat tire on his bicycle in town this afternoon, unfortunately, and got a drive back.

Saturday 24th. The first cut of grass sileage is stored and covered against the elements: 150 dump truck loads’ worth. Hopefully, successive cuts over the summer will yield double that amount again.

You’d think after the winter they had, the barn cats would be happy about summer. But it seems it’s really just the project of being a cat that interests them.

Sunday 25th. Brother Henry was here and, at lunch was able to take in slides from the Trinity Abbey (Utah) archives, lovely spot. The monastery is now sold to, the land and principle buildings will be preserved by, a benevolent rich person, as monks settle either in a care facility, or other monasteries.

Monday 26th. At Lauds, a light came on in the chapel, someone was there: it was John. Joining us for the last part of prayers. Having driven Henry home with our Kia yesterday, he’d returned to pick up his truck.

In Chapter, Brother Glic began relating his Italian Exodus to us. He said that before classes proper began in Rome each participant told their story—their life journey—and sometimes this would move the listeners to tears.

Tuesday 27th. Because today is the 25th Anniversary of Pope Francis’ Episcopal Ordination, Dom Bede offered Mass for him.

Wednesday 28th. Rhubarb grows a few feet from the kitchen door. Our cook has made a delicious rhubarb crisp with it.

The New Brunswick government came through with a few thousand dollars ice storm disaster relief money for us, to cover expenses incurred. Some wonder: how many people got the help; how many people knew they could?

In Chapter, Brother Glic took us from Rome to Assisi, where the last leg of his course took place. In Assisi, the group was lodged at a bed and breakfast only 200 metres from the wall of the old town. Nice, but not always quiet.

Thursday 29th. Our Canadian flag is now proudly flying. It is striking to see it again. In refectory, to mark the double Solemnity of Peter and Paul we listened to the Vatican National Anthem and related songs on YouTube.

Friday 30th. Father Innocent was hand-watering some plants in his garden this morning. At the moment, with sunshine warming things up the bugs weren’t bad.

At Four PM a freight train passed through town. The loud whistle only made the surrounding silence all the more noticeable. A canoeist set out onto the lake not long after.