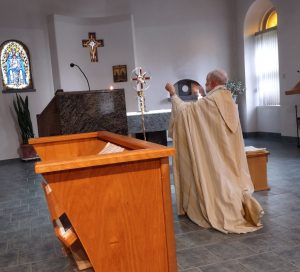 Thursday 1st. This Canada Day morning, a friend and his dog dropped by to offer greetings, and some treats. Conditions permitting, there are just a few more visitors to the grounds now. After Mass, Father Roger stepped outside the basement door, which is under the big red Chapel doors, to feed our cats.

Friday 2nd. As our refectory book explores day to day details of the Second Vatican Council, Joseph Ratzinger the subject of the book becomes less central, though he was certainly a player; the motive for the digressions being that events and relationships impact his later life so deeply. Arguably, one story could not be told without the other.

Saturday 3rd. Brother Stephan is restoring the sanctuary lamp for the guest house Chapel, and looking for a few other elements which were moved out in order to allow for renovations.

Sunday 4th. At lunch, we listened to some of Gilbert and Sullivan’s comic opera the Yeomen of the Guard, the third time we’ve listened to their works recently. 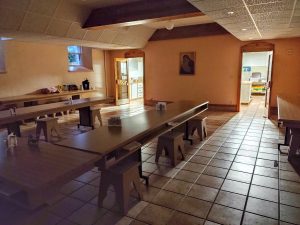 Monday 5th. Dom Innocent has been tending to the vine garden, and its environs.

Wednesday 7th. Our new book for refectory listening is An Altar In the World, by Barbara Brown Taylor. It recounts her spiritual practices. She has a lot to share, in a quiet enough way, and reads out the book herself.

Thursday 8th. The lake is now a dark brown, and looks nice against all the green. Someone has put a lawn chair at lakeside among the trees across from the monastery. Our farmer friends say that hay is abundant this year, including from fields we let out.

Friday 9th. A post-tropical storm brought us some warm wind and rain, and lovely clouds. It was announced that in a few weeks, passenger trains will begin rolling into Rogersville again, after a 16 month pause. Years past, the train made some remarkable visits to the monastery possible for people, from both directions in the country.

Saturday 10th. Another overhead light fixture was replaced in Chapel. A climbing plant outside the east wall of the Chapel has made it up to the stained glass Glorious Cross, and is taking a bit of the light.

Sunday 11th. The Solemnity of Saint Benedict falling on a Sunday  bumps the Mass readings with its own readings, for us. Adding to a nice July 11th were some new faces at Mass. 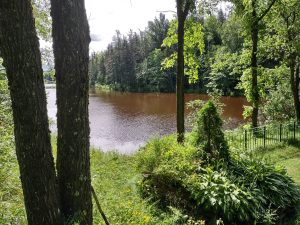 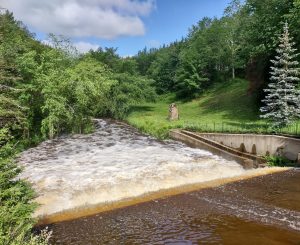 Monday 12th. As summer progresses, birdsong towards dawn becomes a bit less intense and involved. The search for a new cook goes on, as well as for grounds assistant, as announced on a sign at the front door.

Tuesday 13th. At Chapter this morning Dom Innocent gave us an update on the lives of the four other communities with which we form the Canadian region of our Order, with mention of the former members of a fifth monastery, Prairies, now closed. With closure last year, they became members of Val Notre Dame, Quebec, while continuing to live in Manitoba. Innocent pointed out that while some regions in our Order have resumed ordinary meetings, the superiors gathering face to face, Canada has yet to pick the date to do so.

Wednesday 14th. Cows got loose from a nearby barn, and were excitedly exploring nature, and roads, next to the monastery, before being rounded up. Monks continue receiving Covid-19 vaccinations, alongside many neighbours.

Thursday 15th. A friend has been fishing on the lake, and he caught some small ones. The lake’s eels are a draw for him, and he hopes to catch a few.

Friday 16th. Interest in guesthouse retreats is growing, as  enquiries about bookings get nearer to the modest rhythm of a few years back.

Saturday 17th. In our refectory book, Barbara Brown Taylor is on to the subject of the desert fathers, and it is interesting to hear her distinctive take on pioneers we’ve encountered before. 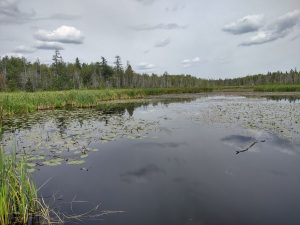 Lake in the Woods.

Sunday 18th. At lunch, we listened to a series of the world’s nicest national anthems.

Monday 19th. Humid days and nights have the wooden corridor floors crackling. With the Chapel windows wide open to cool things, the occasional sound of transport trucks, muffled by trees, joins our prayer.

Wednesday 21st. A new cook is trying their hand this week, and we are enjoying the results.

Thursday 22nd. Bede is somewhat more in demand at the front desk these days. On the wall there is a calendar from Mount Saint Bernard Abbey, England, with photos by a monk there who had been a professional photographer, till he cycled to the monastery one day, and decided he might as well stay. Mount saint Bernard was Bede’s base for the first four decades of his monastic life.

Friday 23rd. On the south side of the monastery, trimming and weeding have changed the look of things, and freed up windows which look down into our refectory. Some of the weeds now gone were purple thistles.

Saturday 24th. Barbara Brown Taylor, our refectory book author, is no longer involved in Anglican parish ministry but the mix of gifts and qualities which drew attention to her preaching in America,  remains. The book predates the present-day health crisis by a decade, but in some regards speaks to it.

Sunday 25th. A new person tried their hand at mowing and trimming this week, with plenty to see to on every side of the monastery. At lunch we listened to chamber music by London’s own Thomas Arne.

Monday 26th. Having received a journal of Memramcook studies, Brother Leo is reading about the passage of the Spanish Flu pandemic through his home village, not many years before he was born. The sound of a dropped cup breaking by accident at lunch today, brought fond memories of monks of old here, and their culinary mischances.

Tuesday 27th. A friend has been cleaning windows in the glass entryway to the guest-house. This morning, some people were praying at one of the graves in front of the monastery, where are buried some folks who wanted to remain close to our monks. Our own cemetery is around back, on the lake.

Wednesday 28th. A long feed truck slowly rolled away, after replenishing the poultry barn silos, raising a small cloud of dust from the dirt road as it went. To the left of our main gate, Brother Stephan and a technician were reviewing the functioning of our wastewater treatment system, installed underground last year.

Thursday 29th. Temperatures have been hovering around ten degrees, and below, part of the day, so fresh air has been abundant as we pray.

Friday 30th. Near the end of her book on spiritual practices, Barbara Brown Taylor has arrived at ‘The Practice of Being Present to God: Prayer’, and as she reads on this topic, her voice becomes more impassioned, and clear. Some indications for Mass seating, with set of allotted seat numbers to take, were removed from the front door today in preparation for the province’s transition away from health restrictions, tonight.

Saturday 31st. Meeting after Lauds, we reviewed a few changes to our liturgy, now that the province has entered the green phase. It has been a while since we first had to discuss our response to public health changes, with many blessings in-between time; blessings reflected also on the faces of those at Mass with us today.