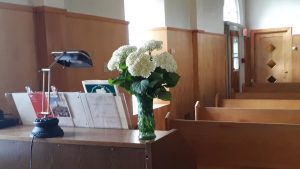 Flowers on the Organ

Wednesday 1st.  Though it was Canada Day today, the fellow doing the demolition could be seen pivoting on his truck, working away. Despite dark clouds, sudden wind, and several drops, no real rain fell again today. At Vespers, there did seem to be a sound of thunder, but it was actually the sound of a section of the barn under demolition, collapsing.

Thursday 2nd. Wood has arrived for the new poultry barn. Because of the length needed, it had to come all the way from the west coast, where trees stand a better chance of reaching up.

Friday 3rd. Though much wreckage is left to be cleared, today the west face of the old barn came down, and the barn was no longer present in the same way.

Saturday 4th. In recent days I’ve heard from Religious I know here and there around the world. They each spoke of the 2020 challenges specific to their communities, yet were upbeat: “God is above all.”

Sunday 5th. Bede played a Fourth of July music mix at lunch, which included the Boss himself. Before lunch, Dom Innocent offered a  friendly reminder on health restrictions, and a brief preview of next stages for us.

Monday 6th. Brother Leo was happy today because it was the feast of a Saint he admires, Saint Maria Goretti. He first learned about her, and was immediately struck by her story, when he entered the monastery.

Tuesday 7th. Farmers are using our farm sewage lagoon, filling up a tank truck for fertilising purposes. In Chapter this morning we met to mull over policies for a re-opened guest house. The hope is to   creating an information sheet eventual guests will be able to read. The meeting went well.

Wednesday 8th. We had some steady rain, not an enormous amount,  yet the fields are greening up already, as our bird friends set their minds to more than chirping and waiting. The demolition work took a pause today. Among the structures saved from the dairy barn complex the former milking parlour stands out, and eventually it will need to be walled up where it once met the cows’ sleeping and eating quarters.

Thursday 9th. Back-filling continued around the base of the chicken barn construction site. A few Mass-goers have signed our guest book, near the front door, which had lain untouched for months. Father Roger tended to plants in the Chapel and scriptorium this afternoon, 14 of them altogether. One of our cats paused to look at the demolition site, which has taken on a bit more of a sense of order. The fellow demolishing the barn is friendly, and seems to enjoy quietly solving the puzzle of what to take apart next.

Friday 10th. Brother Leo could not understand what it is he is now able to see just beyond the former dairy barn. It is one of the sileage bunkers we used to use, now being used by another farmer. Behind the bunkers, the  field curves down gently, standing out from an otherwise flat landscape.

Saturday 11th. Today is the Solemnity of Saint Benedict, which for us has a beauty and power all its own.

Sunday 12th. The guest-house was still this afternoon. It is striking to think what having the chance to spend a few days in such humble surroundings would mean to people, so different from one another. This week, Brother Stephan neatly placed some plexiglass at the reception desk, also adding a plexiglass windshield to the Kawasaki Mule, which now boasts a new and more powerful engine.

Monday 13th. Our cleaning lady arrived this morning and set about making our guest house sparkle once more, after the place having accumulated months’ worth of dust. Our refectory book on life in the Scottish Hebrides today added the episode necessary to any collection of Scottish (or Nova Scotian) true-life tales: ghosts.

Tuesday 14th. In Chapter today, we heard news from other Canadian monasteries, and learned a bit about where they are presently situated time-wise in terms of matters such as re-opening to the public. As well this morning, we reviewed a list of rules for the guest-house, which re-opens in a limited way today, our first guest being a Priest friend.

Wednesday 15th. Dom Innocent was able to visit Brother Henry today, accessing the inside of the Dieppe residence for the first time. Henry sems to be sailing through summer pretty well. The demolition of our dairy barn is nearing completion, the space where the cows once lived now completely open, though at floor level one can see where their beds were, and where their feeding alley was.

Thursday 16th. Despite changed circumstances, the guest-house now back in service seems to have retained its relaxed and cheerful feel. At Mass, now with a few outside attendees every day, the season’s readings from the Prophets seem to take on a renewed value, these more-convoluted times.

Friday 17th. Father Roger cleaned the inside of our Keurig coffee machine, which brews many’s the cup. A long-time friend of Bede’s in Rome sent him as a gift one of Gina de Bellis’ fine books of photos of Rome, a place Bede has explored thoroughly by bicycle.

Saturday 18th. This morning just before sunrise, silhouettes of tractors and other machines were visible through the mist looking east. Swallows that lost quite a home in the old dairy barn, are still around, and were feeding high in the air as other small birds worked the space just above the surface of the lake.

Sunday 19th. Brother Leo had a look at the chicken barn construction site, then down dirt roads he had bicycled along often, many years past. He asked if there would be a flood of tourists hoping to see him, once he stepped out back, but he had little trouble there. 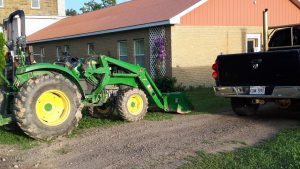 Machinery at the Back Door

Monday 20th. In the kitchen this week, there was a small circle of cooks day by day, Father Roger being one. Brother Leo has finished reading a 1979 biography of John Paul II he ran across. Leo was constantly struck by the unusual contours of Karol Wojtyla’s life.

Tuesday 21st. Renovations of the former milking parlor have begun, in order to add a wall facing north. Intense sunshine this afternoon made the white pieta at lakeside shine. The lake water has turned a thick brown. Summer this year is so quiet in these parts, like rolling New Brunswick back a few decades.

Wednesday 22nd. U-pick for monastery raspberries opened for the season. A retreatant from a neighbouring Atlantic province was able to cross the re-opened border and pass a few peaceful days with us, as he has done for many years. The Assumption Novena in Rogersville has been cancelled, which will mean fewer New Brunswick guests here in August.

Thursday 23rd. As the days grow shorter, the night light over the shop door becomes more noticeable mornings, and is pretty. The sound of hammers, and other such sounds, brings summer memories back. The crew working on the former milking parlour outside our back door are quick off the mark, sometimes starting carpentry work for the day  before it is light out. 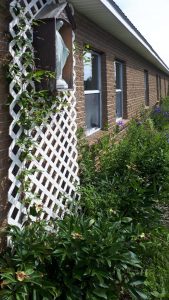 Flowers along the annex

Friday 24th. From a distance, what is visible so far of the new chicken barn east of the monastery, is earth all around, including a big pile of topsoil, gradually being sold. Promising clouds once again failed to give much rain today; we pray for rain still.

Saturday 25th. Today marked the only anniversary this month: 22 years Priestly Ordination for Dom Innocent. Before Vespers, the aroma of an omelette Father Roger was preparing filled the air. Raspberry pickers were in our field, after supper. 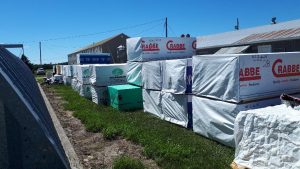 Sunday 26th. Steve this week cleared away more brush from roadside. The line of trees and monastery sign along the highway now stand out more.

Monday 27th. We tried something new at table, duck eggs from our wonderful egg supplier. The omelette was tasty. An hour south, Brother Henry had his pacemaker checked at the hospital clinic–all okay for another year. Quietly going through the paces yet again, Henry’s sense of humor was keen this morning, his interest in life deep.

Tuesday 28th. Brother Leo was startled by a red sunrise, which quickly disappeared in the clouds as we got a decent morning’s warm rain: pouring rain, for once. A floor drain backed up in the basement at the same time, but this was unrelated to the rain.

Wednesday 29th. Outside, the crickets can now be heard before dawn. There are swathes of clover in the green fields. Spiders seem more present than usual at the back door, and have been working and webbing away.

Thursday 30th. Brother Leo received a copy of Ronald Label’s book “Au village du bois”, from the Centre d’Études Acadiennes. It recounts the origin and development of his beloved Memramcook, a spot whose  every road he remembers. Workers arrived to get started on a new monastery wastewater treatment project, which has been projected for quite some time.

Friday 31st. The tree-lined long drive leading from the highway to the guesthouse main entrance is getting a clean-up, as regards long branches closest to the ground. The whole front area has slowly gained a sort of rough majesty as it greens up from growth. Steve also worked today on the bell system.