Saturday 1st. The mosquitoes assembled for a Canada Day fly-by as the calves were being fed this morning. Stirring. Dom Bede for his part was one province west this Canada Day, on the first leg of his journey to the Lac Saint Jean region of Québec.

Sunday 2nd. This afternoon, some folks could be heard drag racing on what must have been an otherwise still Route 126. This evening, Brother Glic showed us a video on the monastery of Monte Cassino. The film documented a less-well known chapter in the Abbey’s WW II history: two cultivated Nazis organised the salvation of the entire manuscript collection of the Abbey prior to the massive bombing, delivering the manuscripts into Italian hands in Rome.

Monday 3rd. The summer we are having this year seems to be boosting clover and buttercup growth.

The eagle made a few lazy circles over lake’s edge this morning, then perched on a tree top. The water table here is high, so trees can only grow so tall. The few trees that jut up higher are the eagle’s friends.

There were ten people in for Mass. They are all older, and they all seem young. When they are quietly waiting for Mass, you can sense their goodness.

Tuesday 4th. In time for the 4th, Bruce Springsteen in today’s passage from Born to Run shared his feelings on his country circa 2015. Maintaining the value of embracing immigration is important to him. Brother Glic, who came in on the book’s story halfway through, seems to appreciate it.

Wednesday 5th. Someone from Herring Cove has sent us a lovely hand-written note, asking us about this place, and telling us a bit about their life.

Thursday 6th. As this year’s hay made its way into the barn, very high summer winds arose. By evening wind had snapped fresh twigs off of the trees. Brother Glic showed a DVD of Assisi, with some impressive panoramic shots.

Friday 7th. On the farm, young (beginning) and older employees work side by side, the day is filled with tasks to accomplish.

Rogersville now has its own rainbow crosswalk, in preparation for Gay Pride week. Given the stark appearance of a lot of our Main Street, the addition of a rainbow anything could hardly be deemed excessive.

Saturday 8th. The Miramichiers are impressive when they arrive for Saturday Mass. They seem energetic even when they’re still, and they have a beautiful earnestness about worship.

Sunday 9th. In the guest-house parking lot, there’s a vehicle from Ontario. Not everyday we see that here, nice. At Mass, other, fresh faces. Who are they? Brother Glic played some Don Williams for us at lunch time.

Monday 10th. The full moon setting in the west cast a gentle light on the lake, making its surface look nearly like ice.

Steve bought a new, heavy duty washing machine for the milking parlour, for washing the cloths used in milking. It has MCT: Maytag Commercial Technology.

This evening, after Compline, some heavy equipment rolled in, preceded by someone hauling a special-looking ATV. The tractor with implement is here to dig some needed drainage channels in the ground. 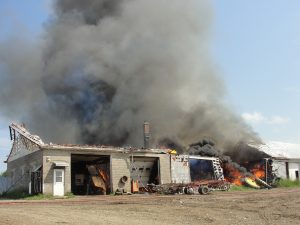 Feast of Saint Benedict. Thanks be to God nobody was hurt. Good-bye to our Farm Workshop.

Tuesday 11th. Fire broke out mid-morning in the long farm garage / repair shop. A tractor parked in the bay next to the shop caught fire, and blew. The roof of the affected half of the building went up completely, sheet metal roofing melting. The wind was towards the north, which favored the fire’s not spreading. By lunchtime, the fire was put out. Among the volunteer firefighters present was the father of one employee, the son of a second.

Wednesday 12th. A Parish Priest friend has been by for his annual retreat. Faced with challenges and many years’ service, he’s retained his freshness to the point you hardly notice him aging.

The farm team was regrouping and reorganising bright and early this morning, after yesterday’s loss. Different cars and trucks have been slowly arriving and leaving before a sight we hadn’t expected to see.

Thursday 13th. Its windows shattered, the burned-out mechanic shop was cleared of everything that was in it.

The government trims back a bit of the roadside growth on the 126 each year, without ever achieving a groomed roadside. On the road to Moncton, a lonely highway sometimes surrounded only by wilderness, someone has left a porcelain toilet flower planter for passers-by to see.

Friday 14th. In Chapter, Dom Bede (who returned yesterday) presented the regional report as it will be delivered to the General Chapter this October. The House reports for our six in Canada will be presented next. His trip went well and the six-hour bus ride from Montreal towards Quebec’s north, he enjoyed.

Saturday 15th. Father Innocent is preparing for his trip to Nigeria, where he has been invited to speak at a conference.

Sunday 16th. The new washing machine is giving us fluffier towels for prepping the cows for milking. A few of the farm hands pitched in today, after a traumatic week. The barn cats are less evidently on the hunt, now that there are a lot of birds around. A sign of success?

Tuesday 18th. Father Roger attended a chicken producers meeting in Moncton today. Here, corn so green, slightly brighter, stands out looking east of the monastery. It seems to hold so much life.

Wednesday 19th. Moths from the forest wait at the window and door lights trying to get in, during night milking. Some the size of a small bird.

Thursday 20th. When the hay was done by the small bale, our hay wagons with brightly-colored rails were filled to the brim by a machine which would shoot finished bales into the wagon. Now the truck can haul two flat-bed trailers back to back, neatly stacked with just a few, huge round bales.

Stephan has set up a temporary shop in the metal hangar along the East side of the farm.

Rogersville was so quiet this week, I wondered if it wouldn’t have much the same feel it would have had 80 years ago.

In Chapter this morning, we talked about how the use of some English Psalms for Vespers is going. Some say English is just more difficult to sing in our chanting style than French. Others say we’re getting the hang of it bit by bit. Bede pointed out that English is more monosyllabic than French, which dictates a new series of choices as to where to put the stress.

Saturday 22nd. “That the good news of life might reach the ends of the earth”: this morning was our first celebration of Saint Mary Magdalene’s day in the new status as a Feast.

Sunday 23rd. Brother Henry made it up for the day. He pointed out a maple tree outside, the nice big one next to the dairy barn and reminded me that it was planted by one of our founders from France. Later, Henry was introduced to a visitor’s Boston Terrier out front. At lunch we heard of Innocent’s voyage. It’s going well, but he had complications as regards flights and baggage.

Monday 24th. In Chapter, Dom Bede went over the Statute on Regular Visitations with us, because it is that time again; soon. The statute is beautifully and carefully developed, evoking the mystery, first, then later in the text the ordinariness of the moment: “The Visitor will show great respect for the community visited and for its superior, trusting in the Spirit working in each person.” … “The brothers will welcome the Visitor in faith and joy. They will make every effort to see the Visitation as a call to personal and communal conversion.”

Tuesday 25th. Raspberry U-pick, and produce sales have begun. A sign on the front door announces: lettuce, tomatoes, cucumbers and zucchini for sale. Mmm. Without volunteers, it seems we would never clear the raspberry canes of all the berries. In fact, berries might be lost.

A CBC reporter was by, scouting locations for a television spot on Rogersville. After a look around accompanied by Dom Bede, she decided we were not implicated enough in local affairs to count.

One of the nurses from Brother Henry’s care home in Dieppe was visiting a friend near here so, she also visited us, and joined us for Vespers. Like others who work with her, she is a fountain of goodness.

Wednesday 26th. The kitchen sink has clogged up, and three methods tried have so far done little to get things flowing again.

Thursday 27th. On the horizon this morning the clouds were somewhere between pink and orange. Funny sky (for us), and pretty. But not promising for rain, which we need. Dom Bede offered Mass this morning for that intention.

Friday 28th. The next audio book in the refectory is a history of ancient Rome, by England’s Mary Beard. As it was published only a few years ago, and the field of history is advancing all the time, we’ll all hear something we never heard before.

Saturday 29th. Even up to Mass time, the air outside had the crisp cool edge you’d associate with September, not July. Nary a cloud in sight, unfortunately. Humid.

Glic was watering the plants in the greenhouse this morning. This afternoon Stephan was getting around between farm buildings via bicycle in order to save time.

Sunday 30th. A nice group for Mass on a quiet Sunday morning indeed. Down at the grotto, the rails to the long stairway down are sporting a fresh coat of paint, and the rails on the walkway across the spillway are in the process of being re-painted, too. Bit of water splashing down the fish ladder on the side. Not enough water in the lake for any to make it over the spillway. 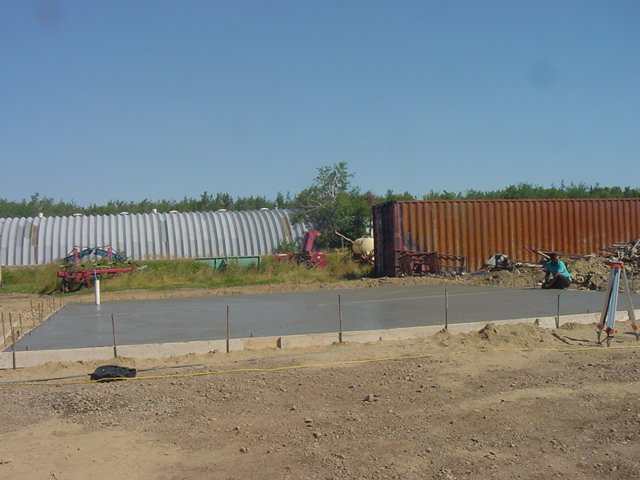 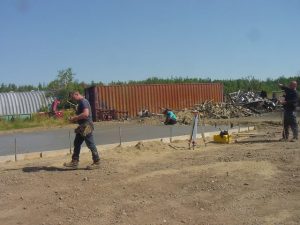 Monday 31st. Father Roger learned of his mother’s passing yesterday, after our monastic day had ended. This meant immediate preparations for getting to Ontario, his home province. He will fly Tuesday.

At dawn I drove one of the Trappistines to the airport in Moncton. We were both looking out for wildlife crossing the highway, and sure enough once we reached the sinewy last miles before Moncton a rabbit gamely hopped across the highway, narrowly avoiding the car. I brought back from Moncton my brother Father Jason Touchie, for his annual visit here, later joined by our parents. In the car he played an unusual music CD, the Orthodox Church in Alaska, circa 1970’s, including their prayerful version of ‘America, The Beautiful.’