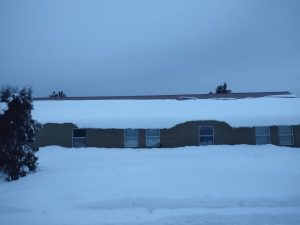 Sunday 1st.  Our Abbot General asked all our monasteries to offer Mass for the repose of the soul of Pope Benedict January 5th, and shared the letter of condolence he sent to Pope Francis on the behalf of all the members of our Order.

Monday 2nd. We are enjoying Christmas treats, on a table under the Christmas card line in the refectory.

Tuesday, 3rd. In Chapter, Dom Innocent mentioned we would soon review our ‘portrait of the ideal novice’, which describes for newcomers the goals we strive towards in our concrete daily living. It also serves as a customary for everyone in the house, and as such we update it periodically.

Wednesday 4th. Temperatures, hovering just above or below zero, have created a lovely mist over snow and ice. A US monastery’s Christmas gift to us arrived a bit late this year…because it had been accidentally routed to Australia by the postal service, before finding its way to Canada.

Thursday 5th. Father Roger offered Mass this morning for the eternal repose of Pope Benedict XVI. A few anti-slip treads on the edge of the concret 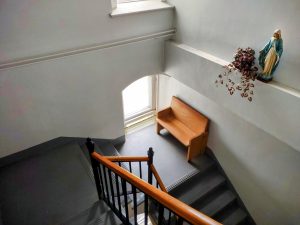 e stairways were removed, and cleaned: stairs may get some fresh paint, soon.

Saturday 7th. Brother Paul fired up the Kawasaki Mule, our now-vintage UTV (Utility Terrain Vehicle). Father Graham assisted at the funeral of Irène DesRoches, a former employee who was also wife, mother, daughter-in-law, or sister to other monastery employees.

Sunday 8th. In his Epiphany homily, Dom Innocent spoke of the spiritual light to be found in the Catechism of the Catholic Church. To celebrate Father Bede’s 80th birthday today, we listened to popular songs of 1943 in England, including ‘Scotland the Brave’, a bagpipe standard whose lyrics are rarely heard.

Monday 9th. A friend introduced us to a prayer which I, at least, had never heard of: the litany of humility. Our first cycle of poultry production of the year got underway today.

Tuesday 10th. Brother Paul has been removing Christmas  decorations from the refectory, and has jettisoned the Christmas tree, which seemed perhaps too perfect to be a real one. Over the holidays we heard from the families of monks of yesteryear, such as Father Maurice Guimond and Father Adélard Robichaud, as well as from the family of our late friend, Soviet dissident Yuri Glazov.

Wednesday 11th. Two eagles were perched over the lake today, one just beneath the other. Inside, one of our meshes for wi-fi has gotten banged around, and will have to be replaced.

Thursday 12th. The Abbot-General issued a new circular letter to the members of the Order, his second. The theme is prayer for vocations and renewal for the Order, with a special day of prayer being declared for our monasteries each January 26, Feast of the Founders of Citeaux. 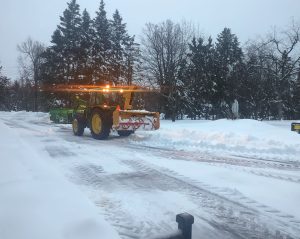 Friday 13th. Brother Paul was out early this morning, clearing snow. At supper, we sampled some sour-dough bread he made for us.

Saturday 14th. Despite the weather yesterday, M. Béatrice Vlanloeil from Les Gardes in France was able to get to Moncton, and here.

Sunday 15th. Dom Innocent has drawn attention to the beauty of Dom Bernardus’ new circular. Indeed, one finds in his aperçus (of so many of us around the world) candor, compassion, and calm.

Monday 16th. Snow, rain, freezing rain, ice pellets all found their way to us, and the conditions caused some issues with our back-up generators, as well as with the big snow-blower.

Tuesday 17th. In chapter, Dom Innocent looked at the Abbot-General’s new circular letter with us. He also asked us to suggest ways we could take part in the Order’s special day of prayer for vocations and renewal, next week. 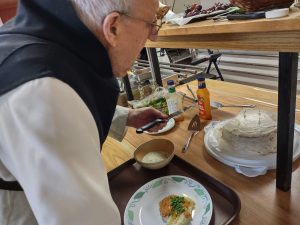 Wednesday 18th. Brother Léo turned 96 today, and reveled in a for the most part quiet, and ordinary day. In the evening, he looked  nostalgically at a big photo of the Miramichi Valley League baseball team he once played on, alongside his brothers, his Dupuis cousins, many friends. 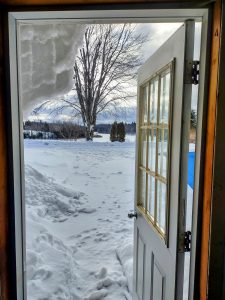 An open door to welcome the next snowstorm

Thursday 19th. Brother Léo and I were talking about what Jean-Claude Sagne once wrote: in order to have God as Father, it is necessary to accept the Cross. Brother Léo said: “I think everyone accepts the Cross. Everyone knows they are going to die. It is hard to say. It is a mystery.”

Friday 20th. As our refectory book on the French underground nears war’s end, the faith

dimension, the Catholicity of often-suffering underground members’ lives emerges, here and there.

Sunday 22nd. Guests ae on the horizon once again, after another time of greater solitude for us.

Monday 23rd. A first-time retreatant arrived by train this evening.

Tuesday 24th. In Chapter, we considered adding recent work on our vision of community, to our ‘portrait of the ideal novice, which we will soon be revising, for the first time in a while.

Wednesday 25th. A retreatant got some snow-shoeing in. A few last international Christmas greeting cards have arrived, and the occasional extra birthday card for Brother Leo still turns up.

Thursday 26th. The solemnity of the Founders of Cîteaux was a very nice day, with extra prayer and adoration this year, to mark the Order’s first annual day built around the theme of growth and renewal for our religious family.

Friday 27th. Father Graham was able to glimpse a lynx recently, on Route 116. Brother Paul, originally from Connecticut, is keeping an eye out to see a moose for the first time.

Saturday 28th. A new cook is trying their hand at preparing vittles for us.

Sunday 29th. For lunch, we listened to a miscellany including a piece by Giovanni Battista Riccio.