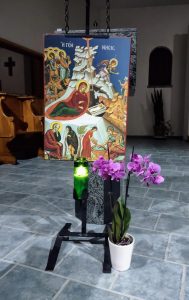 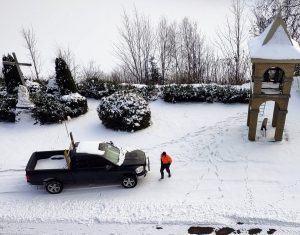 Saturday 1st. Upon rising, we found gifts from a secret Santa. As per custom, we met after Lauds to exchange New Year’s greetings, and pick up a calendar, or two. We had a wonderful lunch together, and shared stories of friends old and new.

Sunday 2nd. In one of Brother Leo’s first dreams of the New Year he dreamt he was in Africa, a continent which intrigues him, and was involved in some sort of dialogue.

Monday 3rd. We received a Christmas card from Leicestershire’s Mount Saint Bernard Abbey, where Father Bede began his monastic life. It is signed by 15 monks, and the design features artwork by a 19th century MSB lay-brother, expert in heraldry.

Tuesday 4th. The big kitchen sink, with dual basins, got a bit of a repair this week. Brother Leo is impressed again, week by week by the excellence of the Psalms, which make up so much of our Divine Office, saying they reflect perfectly what our nature knows.

Wednesday 5th. We learned of the passing of Father Donald Arsenault. Donald retired from ministry in 1982 in order to become a hermit on our property. During a time when eremitic life was in vogue, he stood out in superiors’ eyes for his balanced approach to the solitary path.

Thursday 6th. Sand was spread on our various drives, to counter very smooth ice. Our refectory reading is bringing us to the end of a Comanche era in the United States, revealing the moment of post-wilderness western history still shared today.

Friday 7th. A few show up for Mass, more men then women. The province, and our area with it, braced for the first serious snowfall this winter, as an eastern wind blew over our lake.

Saturday 8th. Father Bede celebrated a birthday, and gingerly extinguished new style birthday candles, which for health reasons are not on the cake. A newcomer to poultry farming was shown our operation by Father Roger. The icon for the Nativity has been removed from its place in Chapel, as we ease nearer Ordinary Time.

Sunday 9th. It was the first anniversary of our Brother Henry’s death. An eagle stood on its branch across the lake for Mass. 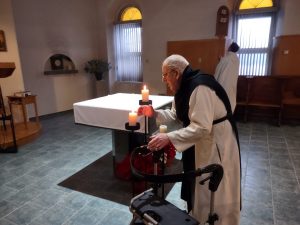 Bkrother Leo and Brother Stephan clearing up after Mass

Monday 10th. The little chime in the scriptorium which we hear in Chapel, to signal the start of Offices, seems to fade out at times. Traces of Christmas decorations disappear day by day, except for the orchid which decorated our Chapel, and is still in front of the altar.

Tuesday 11th. In Chapter, Dom Innocent commented on the first verses of Chapter One of the Rule, on Benedict’s four different types of monks. He glanced through our 2022 schedule with us, shared some plans, asked if we had any ideas for a retreat master this year: a good idea came up. He also mentioned recent news concerning the proposed timetable for superiors to arrive at the ten-day Assisi General Chapter, to select the new Abbot General.

Wednesday 12th. Nice hot soups this week, and this evening a sizzling clam chowder, helped warm up an unusually cold January spell. Today was the feast of our Saint Aelred of Rievaulx, which is always a heartening occasion. As a child, Father Bede was able to spend time among the ruins of 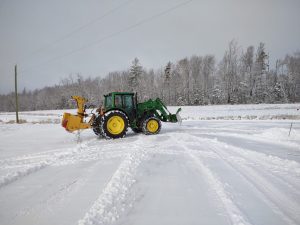 Thursday 13th. Brother Stephan has been working on one of the big basement doors. Brother Leo, who formerly believed he was destined for a short life, has begun receiving greetings for his fast-approaching 95th.

Friday 14th. With another provincial lockdown beginning this evening, we received the last townspeople we’ll see for Mass, for a few weeks. Come what may, our bonds grow.

Saturday 15th. With the front door locked, some snow and much wind marked the day outside.

Sunday 16th. After None, Bede set up for Eucharistic Adoration and Benediction this evening, and Steve practiced the organ. 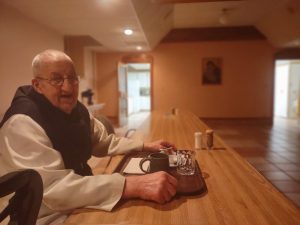 Monday, January 17th. Our cats seem ‘winter-averse’, but did have a good look at the now-jettisoned Christmas tree. This afternoon brought high winds, snow, ice pellets. Brother Leo claimed that nature was in turmoil due to the approach of his birthday.

Tuesday, January 18th. In Chapter, Dom Innocent continued speaking on Chapter One of the Rule. Afterwards, Brother Leo shared some thoughts on how to field questions from God once we leave this earth and meet him face to face. Monks’ engagements for things such as giving retreats are off for the next few weeks, as we follow developments in health policy locally. Brother Leo gracefully turned 95 today, blowing out candles, offering jokes, dreaming of long-absent friends. 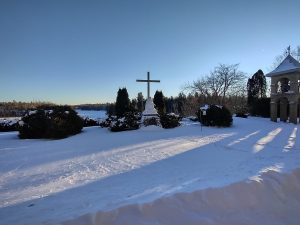 Wednesday, January 19th. A partial melt, then freezing, has left the lake with a reflective white surface. 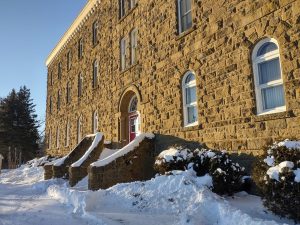 Thursday, January 20th. Today, we celebrated Blessed Cyprian Michael Tansi, who was a monk of Mount Saint Bernard Abbey during the time Bede was there, among the 75 or so monks.

Friday, January 21st. A squirrel galloped across the front drive today, first I have seen here in a while.

Saturday, January 22nd. One of the monks is preparing for some snowshoeing, but near minus-thirty mornings are not an encouragement. This morning, we celebrated a first memorial Saturday for the Blessed Virgin this year.

Sunday, January 23rd. Sunday Mass these quiet days proceeds just as it does when people are here to join us. Changed circumstances are on some levels a chance for rediscovery of our simple life.

Monday 24th The chicken barn is being prepared for the arrival  of a new flock. Father Bede got to an appointment many months in the making. During the week, there would be a string of scheduled appointments for monks.

Tuesday 25th. Our cook began getting ready for the Solemnity of our Founders tomorrow, as the icon of our founders was placed in the Chapel. The French region of our Order posted online a special prayer for vocations, and the renewal of the way we live Cistercian life. It includes a litan 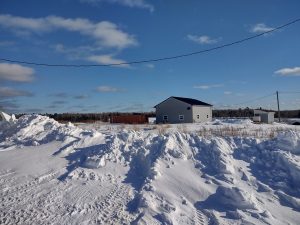 y of Cistercian Saints, beginning with Mary, Queen of Cîteaux.

Wednesday 26th. An experience of God’s Oneness, and of our one order, this solemnity brightened up our January. At lunch, Father Bede was remembering his first Canadian winter…the coldest in a hundred years!

Thursday 27th. An animal left tracks in the snow powder from one side of the lake to the other. There are also some  Skiddoo tracks, but our little corner is not that frequented by these vehicles  this year.

Friday 28th. Brother Leo got to Rogersville for an appointment, not having seen the village in quite a while. The monastery looked better than ever, returning to it. Birds were restless this morning, perhaps sensing the approaching snowstorm.

Saturday 29th. The province announced a return to fewer restrictions on public life, at a moment that coincided with people  staying at home because of the storm. 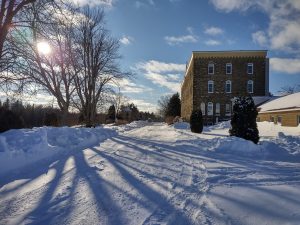 Sunday30th. At Vigils, the PA timed out for the last few words, meaning we had surpassed fifty minutes, which is rare.

Monday 31st. Brother Stephan made his way to the Miramichi, to get parts for our broken snow plowing tractor. 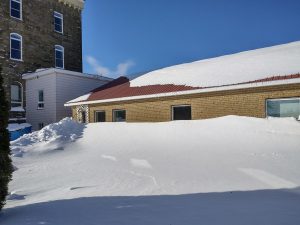 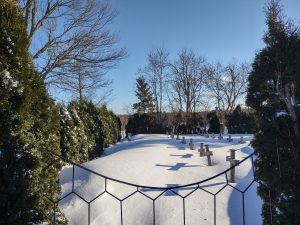