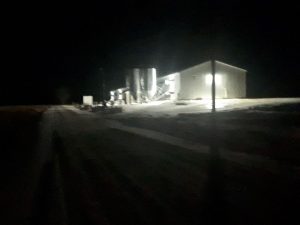 Friday 1st. In Chapter, the brief greetings, one of another seemed to outshine the review of the year past which followed. Soon we were at Mass once again, and midday found us thankfully sharing a festive meal. 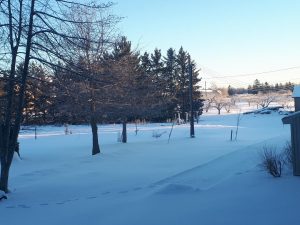 Saturday 2nd. The eagle oversaw a snow fall, from his usual branch. Our Sisters across the way treated us to both meals today, with food from the Chez Freda restaurant in town, as a Christmas gift.   Brother Leo’s dear younger brother René passed away today, leaving Leo one sister.

Monday 4th. Our Brother Henry is now into his final days, at the care home in Dieppe. We are praying for him, and a few of us have been able to visit him in recent days.

Tuesday 5th. At Chapter, Father Bede presented a refresher on Church teaching concerning special cases of confession, noting Pope Francis’ simplifying the process for a Priest acting in the name of the Church in certain cases. Dom Innocent was able to attend the funeral of Brother Léo’s brother René, in Memramcook today, and also to visit Brother Henry.

Wednesday 6th. Brother Leo received an early gift for his birthday, from a former monk who has kept Calvaire in his heart the many years since his departure.

Thursday 7th. Just before supper, Dom Innocent spoke to us about the public health situation in the Province, which is having its worst struggle to date with Covid. Chicks for the new barn are on the horizon, and in a few days only we will be starting fresh.

Friday 8th. Today was Father Bede’s birthday, with some happy cheesecake, and happy moments for us. 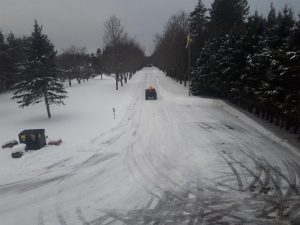 Saturday 9th. Shortly after Mass ended here, Brother Henry passed away. He played a role in all our lives, and was someone  committed to, and in love with this way of life. 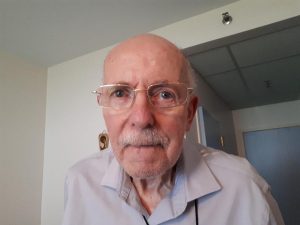 Sunday 10th. At lunch we reminisced about Brother Henry: the lighter moments, which were many; his changes in direction; the  considerable health trials which he bore with courage and openness. He was last able to visit the monastery in June 2018.

Monday 11th.  The lights, bows, and cones came off our Christmas tree, which was a nice one this year. At 2:30 this afternoon, the chicks arrived for our new barn, which quickly became operational. The barn is located in a peaceful spot of its own, just where the public dirt road turns off into the forest. Interiorly, it is at once much like the barns we had; and a new scene, as regards controls for the systems.

Tuesday 12th. After Lauds, we planned and practiced both the rite for receiving our deceased brother and this afternoon’s funeral Mass. The hope was to have some people from outside present for the  Mass, but not too many, given the Province’s current situation. This worked out well. With Dom Innocent presiding, Father Bede, who was Abbot at the time Henry had to move permanently to the care home, gave the homily, on a day which evoked Henry’s own presence and prayer of yesteryear.

Wednesday 13th.  Mass, Lauds and Vespers were offered for the dead, in the quiet of January, and further quiet of the partial lockdown locally. We continue to receive warm messages remembering Henry, his spirit and his ways.

Thursday 14th. The decision was taken to lock up at the front entrance here, for the time being, while the Province works towards taming an upswing in Covid cases. Of the seven health zones the Province is divided into, the monastery’s zone, seven, is the only one with no active cases.

Friday 15th. Although no guests had been accepted for a while, the further pause in visitors to the store or for the Sacraments gives things a different feel, again. 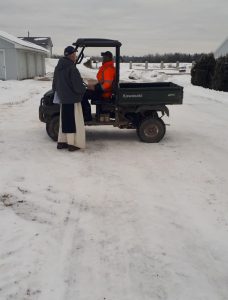 Saturday 16th. Brother Leo is gamely preparing for his 94th birthday next week, receiving many cards, and wondering at time’s fleeting nature, with the accompanying question of why God willed such longevity for him.

Sunday 17th. Brothers worked this week on a system linking the new barn to the monastery’s internet service. 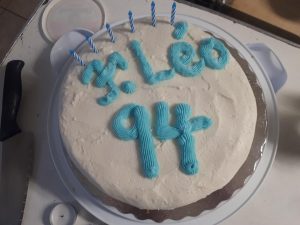 Monday 18th. Ready to tackle 94 with a smile, Brother Leo spent a mostly quiet birthday, surprised by how nice a day it was out. His birthdays become a happier affair in a new way for others, the closer he gets to 100.

Tuesday 19th. In Chapter, Dom Innocent continued his  commentary on the Rule of Saint Benedict’s teaching on receiving novices, today arriving at the verses concerning divesting ourselves of the clothes we have, the identity we bring with us, and being clothed anew. He also shared his thoughts on the recent funeral here, of a monk, Henry. Innocent felt the Mass went well, and highlighted the role the homily played.

Wednesday 20th. On the highway south to the village this morning, sunlight on the icy clouds created a vertical rainbow directly over the road. In town, the change of regime south of the border was animating people in a manner unusual for these crisis months, and admirable.

Thursday 21st. As the week progresses, the Covid situation darkens slightly in the Province. So far, monks have been able nonetheless to maintain scheduled medical appointments, which happily are few, supplemented with appointments by phone.

Friday 22nd. An all-season person was taking her usual walk on the circuit in front of the monastery today, despite some ice.

Saturday 23rd. Our refectory reading has been giving a first-hand account of World War Two’s end in Germany, with ordinary people shining in 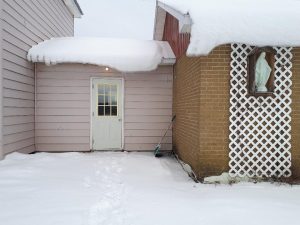 many ways, despite such darkness.

Sunday 24th. Brother Stephan got out for some snow plowing this afternoon.

Monday 25th. We continue to get a mild, but white winter, and it is encouraging.

Tuesday 26th. At such a quiet time of the year, we celebrate the Founders of Citeaux – a spiritual visit home. With today’s special Mass and Offices, and schedule, at Vigils we sang a canticle from Tobit: “Jerusalem will be built with sapphires and emeralds, her walls with precious stones, the streets will be paved with beryl and ruby and stones of Ophir.” 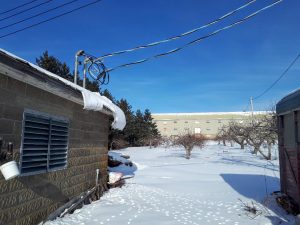 Wednesday 27th. Father Roger has been helping out with the cooking. When he or another of us needs to go to the new barn, it means a short drive, which is different from the old barns, which now stand empty.

Thursday 28th. The antiphons of ordinary time, back for a couple of weeks, so familiar, faintly evoke memories of many changes over many years that God has helped us with here.

Friday 29th. Brother Leo was reflecting on how old age is being kind to him: he is able to attend all the Offices, takes part in what is going on in the community. He still does the Stations of the Cross every morning. He does need to get extra sleep, and along with many dreams of work at the barn, recently dreams he is fishing.

Sunday 31st. With the temperatures dropping, we see a plume of air exhaust from the new barn. Our Province continues its own course through the health crisis showing us, partly through so many government press conferences, who New Brunswickers are now.