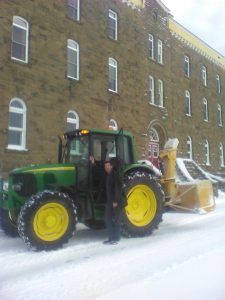 Wednesday 1st. Snow fell on poor old 2019, and was still there this gleaming 2020. Thanks to Steve, a bit less snow. The new snow-blowing tractor is certainly up and running. Once more this year, we met in Chapter after Lauds, to exchange greetings, and collect a calendar from among those offered to the monastery.

Thursday 2nd. A selection of Calvaire merry men made their way across the tracks, to visit the Trappistines’ new home together. A one-of-a-kind moment, and a chance to share in what has been as much a homecoming as a change of lieu for them, after the long process of finding the way forward. The colors are nice, the kitchen is right in the center, several icons grace the walls in the corridors. This visit was also a chance to exchange Christmas greetings, and news; and there was even fudge from Mississippi on hand.

Friday 3rd. A bit of our wood lays piled, nicely, along the road just north of us. It will be taken away whenever a truck has an almost full load to add to.

Saturday 4th. Saturdays, we pray the midday and early afternoon offices together before lunch, in order to give a longer open period in the afternoon. The practice was introduced in the 1990’s as a way of encouraging monks who loved working to experiment with changing gears, now and then.

Sunday 5th. Father Bede and Brother Leo were comparing notes on the art of keeping the door, today. Our internet service is shaky the last while…we live on the wrong side of the tracks, literally, in terms of available servers. 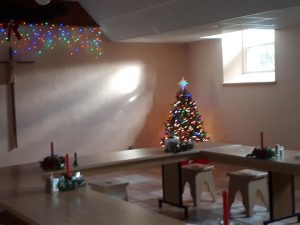 The Twelfth Day of Christmas

Monday 6th. At a certain point in the liturgical holiday cycle, there’s a mixture of fatigue and delight, which is perhaps providential, for opening spirits to unplanned horizons. Brother Leo doubts the monks will make it through all the Christmas treats we have received; however, we seem to be doing fairly good.

Tuesday 7th. Brother Stephan is working on our barber shop clippers, which go through their share of hair in the run of a year. Some technicians arrived today to try and revive our industrial dryer, which at times does not warm much. 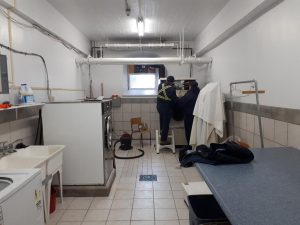 Working on the dryer in the laundry

In refectory, the rhythm of the Churchill book has changed at the approach of, and stages of, World War Two. A sense of irreversibility seems to loom over the West’s confused state now. What a striking contrast with the hope that affected people during WWII.

Wednesday 8th. A night’s dusting of snow produced stars on the trees out front this morning. A guest pointed out that the hardwood choir stalls lining the Chapel walls were in Mistassini, then Saint Benoit du Lac before making their way here. Sturdy.

Thursday 9th. Google turned up images of Brother Léo’s birthplace, Barre Vermont, to his delight. Having left there as an infant, never having seen a picture of Barre in between time, he finds it far nicer than his idea of it. In Chapter this week, Dom Innocent mentioned that our Father Immediate Dom Clément will be dropping by in February, our first monastic visitor in a while. Now we can also look forward to a visit from our Sisters on Sunday.

Friday 10th. Father Bede received a belated birthday cake, and it was decided to renew the practice of posting little cards to mark special dates involving the brothers. The cards we once had for this somehow mostly vanished.

Saturday 11th. Word came that because of an anticipated snow storm this evening, the Sisters’ visit for lunch has been cancelled.

Sunday 12th. It is said that the arrival of a gentle, steady snow is the sign that one will be snowed on for a while, and such was the case today. This evening, Dom Innocent showed slides of his journeys in Italy, and Quebec, and New Brunswick and we saw some familiar faces, such as those of Mère Danièle and Dom Timothy.

Monday 13th. Brother Leo’s 93rd birthday is now straight ahead. People are talking about it; Leo takes the approaching week with a smile. He likes it quiet, but enjoys it all. At the front door office, Father Bede is carefully preparing a list of each monk’s anniversaries: birth, entering monastery, first vows, further steps.

Tuesday 14th. Brother Stephan and Father Bede were  able to visit Brother Henry in Dieppe today. As others have this week, they found him in good spirits, delighted at the surprise of company. He has been there in Dieppe longer than many if not all of the other residents. This afternoon a lady drove quite a ways to visit Brother Leo (and buy some honey) for the first time in 17 years. After a moment or two, we recalled her face and they resumed their rapport.

Wednesday 15th. A call to Halifax today revealed that some there, with an interest in nature, are thinking about Rogersville and us because of ‘the path of totality’: in 2024, we will be in the center of the path of a total solar eclipse.

Thursday 16th. The aroma of Rust-Oleum was in the air today. Brother Glic is refinishing our valiant white food trolley, which may get some new wheels, too.

Friday 17th. Brother Leo received some advance visitors for his big day tomorrow. The temperatures plummeted, sealing us in a sunny white environment.

Saturday 18th. Bede commenced the week of prayer for Christian unity this morning with the Mass for Mary, Mother of the Church. Brother Leo welcomed family for a lunch visit and much laughter, his birthday proving relatively quiet aside from that.

Sunday 19th. Some lovely hymns for the principal offices marked the return of Sundays of Ordinary Time.

Monday 27th. Father Bede put out fresh cowls for the monks, taking the old ones off to his laundry. Brother Glic used the repair shop as a car wash, with sparkling results. Departing guests offered to restore our front lawn statue of the Blessed Virgin Mary on their next visit.

Tuesday 28th. In Chapter, Dom Innocent presented the Moto Proprio from Pope Francis, Communis Vita. It details changes to Canon Law made by Pope Francis in response to the situation of religious being absent without leave from their communities, sometimes even disappearing, as it were.

Wednesday 29th. The new audio book for refectory is about the Blessed Trinity in our lives, and it is by Father Richard Rohr. He certainly launches out with confidence. A new book’s audio narrator (with his or her fresh voice and style, and accent) at first draws attention from the book. But as they pour themselves into the art of reading, the book becomes more present, the narrator and technology less noticeable, until it can seem there is only the book.

Thursday 30th.  The Chapel windows are so old that it is difficult to see clearly through them; this can add a pretty effect to the outdoors; it can also seem to be snowing when it is not. This morning outside, our black cat made its way over the snow, seemingly little interested in or impressed by the challenges winter can present a cat living wild. Also; unaware how lovely a sight its soft movements.

Friday 31st. Bede is working on a bilingual, Cistercian Sanctoral book for use in the Chapel, including prayers needed for Masses for the Cistercian Saints. This morning, Brother Leo was musing on trips he did not take, as a monk, but could have, long ago. France, other places in Europe. To say he regrets having stayed put would be inaccurate. On the other hand, some places fascinate him.