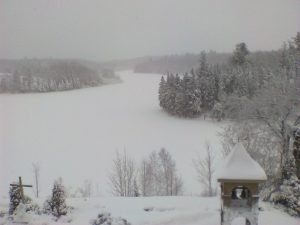 Tuesday 1st. Calendars were distributed in Chapter, after we exchanged New Year’s greetings. As you go around the room, and encounter such a nice variety of people, we seem more than seven. A quiet and dramatic and solemn and relaxed day.

Wednesday 2nd. The geothermal pipes sprung another small leak. Late at night, our friend Father Patrick Ngwenya arrived from Zimbabwe for a week’s visit. Patrick is secretary of the Archbishop of Harare.

Thursday 3rd. Suddenly, there we were at the Sisters for lunch, which was nice. These outings are also about the only time of the year we stand together with them in choir and chant the Psalms. Some incense was burning. Next we moved down their neat corridor, with colorful tiles of yesteryear, into their refectory. Their refectory is above ground, ours in our basement, with high windows. As we ate and talked, laughter was not infrequent. Conversation topics at the corner I was sitting at included Liberace, and death, and age of first experiencing being called to religious life: 13, for the Sister I was talking with.

Friday 4th. We have our own gas station, diesel and regular, but the supplier has not been by, we’re empty and go to town.

Saturday 5th. In the woods far behind the monastery, cut wood lays in impressively neat piles, some of them quite high. Once-densely-packed sections of the forest which have gone through selective cutting, look the better for having gotten a trim.

Sunday 6th. There were some people at mass for Sunday, not a lot. It is as though life is just beginning to stir again after the holidays. 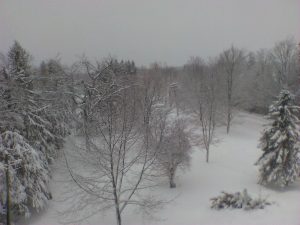 Monday 7th. The monks continue to receive the odd Christmas card from Auld Acquaintance. The three-story chicken barn is being prepared for the next flock. Last week’s chronicle, with its mention of Liberace, has elicited some unexpected responses. I guess that, like Elvis after him, Liberace meant very different things to different people.

Tuesday 8th. Dom Bede celebrated his birthday today, with a four layer cake. Brother Leo made his way to the Miramichi for some tests. When it was time to go, a man older still than Leo, who was talking with him for the first time, did not want to end the conversation so we could go. He told me: “All my life! I’ve relished talking to Priests: you can ask them anything, they are frank, they will tell you what they think.”

Wednesday 9th. Brother Stephan picked up a rental truck as we wait for insurance to come through for the one written off through no fault of our own. He had to choose between a Dodge and a Chevrolet, and chose Dodge.

Thursday 10th. Snow is affecting, when the snow is as bountiful as it has been this week. Today in Dieppe, Brother Henry got out to see a cardiologist for a check-up, and on the way out of the Dumont hospital we saw there had been an accident; people hoping to careen through life and up off-ramps. Amid real health challenges, Henry is patient, open-minded; interested in how people are doing.

Friday 11th. Brother Leo is reporting dreams, not bad, not good, but incomprehensible. Today was the funeral of Eloi, a brother of our late Father Adrien Bordage. It was in Acadieville, a short ways east of here. Eloi was, among his other gifts, a particularly good grand-dad, with always something to do, a story to tell, a game to play; the written tribute to him listed off games they would play, including “kick the can”; I’ve never seen adult grand-children so grieved and so obviously thankful. An impressive stranger came up to me after the funeral and expressed thanks for the recent French translations of the chronicle, which he never misses.

Saturday 12th. The fox crossed the lake this morning.  The fox is an animal I like to see, but as happens when creatures cross the winter lake, he looked a little hard done by.

Sunday 13th. Just before Eucharistic adoration after Vespers, a wisp of candle smoke was made vivid near the ceiling, by the powerful light directly over the altar, which bulb we had to get from Asia. At lunch, we listened to Gustav Leonhardt on You Tube. He plays so well, as though he were setting the world to rights. Bede didn’t fare so badly himself with his homily this morning. I remembered how our procurator general would smile to hear Bede preach, when he was here; a revealing, and mysterious smile.

Monday 14th. Ordinary time returning these days means quite a change in the little melodies we sing, and their words. It brings a moment of freshness, or peace. Makes you think ‘I have a chance’. Today, Father Roger brought our poor old Ford Lariat to the Miramchi to have an external rear-view mirror replaced once again. However, the shop had ordered the wrong part.

Tuesday 15th. I hoped to get a photo of a snow bank, parallel to where the garden once was, wind-carved. But nature outpaced me and I can’t. Commenting the Rule of Saint Benedict in Chapter this morning, Father Innocent read the description of Vigils as celebrated in the early Church, by the whole Church, from the writings of Erigia. The draw which monks feel to Vigils, seems to have been general, then. Also at Chapter, Innocent unveiled a new committee, the Liturgy committee, consisting of Bede, Innocent and Steve.

Wednesday 16th. Time to go to Moncton again. The Highway was a rockier ride today, due to the highway’s heaving from temperature changes, frost. A nice sight: the cops. Whom we rarely see on the road. They had pulled someone over for speeding, at just the right hilly for whirling along. At his residence, Brother Henry was gamely receiving the humorous confidences of the personnel, and enjoying a bit of ginger ale.

Thursday 17th. 1491 by Charles Mann is finished. It was a book which in a good way could make a person feel like a speck within a vast vista. Our new book in refectory, Cloister Walk, evokes the openness and love one encounters in our American monasteries. The author’s experience was mainly at St. John’s, Collegeville it seems. This popular book is now over twenty years old.

Friday 18th. Today was Brother Leo’s long-awaited 92nd birthday, and he took it with alacrity, coming away from it with the gift of a snappy pair of socks from someone. Many people called to greet him, in the morning. In the evening, before Compline, he was reading the Osservatore Romano newspaper, sitting in his chair in the scriptorium, the only light on, he enjoys that paper very much.

Saturday 19th. The basement corridor light to the west side went out, giving the corridor a different allure. The corridor is plain indeed, except for the odd exit light overhead. But it’s nice. Steve says the big machines, parked not so long ago, have now all left our forest. But wood remains to be trucked away.

Sunday 20th. At lunch Father Bede chose for music the BBC transmission of the Vienna Philharmonic’s New Year’s Day concert. This orchestra has lost none of their sparkle. Among the waltzes they played was the Elfenreigen or ‘Dance of the Elves’…new to me. It brought back memories of monks I knew for whom the subject of elves, their possible activities in our barn, was no laughing matter.

Monday 21st. Yesterday, the snow storm waited until a convenient time to start (midday) and then, did it snow. This morning, snow was able to be cleared before the chaplain had to get over to the Sisters, on good roads. Other areas were less fortunate; Moncton was slippery for Bede and Steve today. 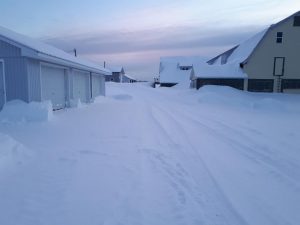 Tuesday 22nd. Snow blowing with the tractor produced what seemed like magic; the statue of the Blessed Virgin Mary in front of the guesthouse vanished. Different theories were circulating as to where she was, but, the force of the mechanical gale of snow simply tipped her over, unfortunately.

Wednesday 23rd. Different grandparents have asked prayers for their grandchildren, whose trials would be hard to imagine. These grandparents are strong, considering how they handle it all.

Thursday 24th. A mysterious leak of water has been just filling the space between some of the tiles in the refectory, off and on. It seems to be descending floor to floor, along the wall, but what is its cause? The steep driveway to the sisters’ monastery has been easier to drive on this year, despite snow and rain, ice, and so on. Walking into the Sisters’ domain to say Mass, one passes the shelf of the guesthouse library. Nova Scotia writers sometime share the guesthouse and their books are among those on the shelf. It is comforting, somehow, to see them.

Friday 25th. Brother Henry made it in to the Georges Dumont Hospital today to be admitted and have a pacemaker implanted. The atmosphere on the hospital floor he was on was quiet and upbeat all at once. At the front entrance one sees a nice painting of Doctor Georges L. Dumont: “Quebecer by origin, Acadian by choice.”

Saturday 26th. The sun smiles now and again, and seems to smile at all we’re doing. Far from urban centers, the weather slowing things down and giving people the chance to talk so often, and giving quiet besides, seems to be the backdrop of a particular thought, or feeling: maybe things in the world aren’t as bad as they seem…or maybe they are.

Sunday 27th. Brother Stephan was practicing his midi-equipped organ in the empty Chapel this afternoon. Brother Henry spent most of the weekend back from hospital, in the residence, doing well.

Monday 28th. Today, Bede took over laundry duties. He has a knack for this. As at his monastery of origin in Yorkshire, we have a big, commercial washer here. The more you squeeze in, the better it washes.

Tuesday 29th. Father Innocent is doing ‘lectio continua’ commentary on the Rule, going through it page by page. It is a manner of proceeding which sheds light on an awful lot of things, slowly, which is perhaps one reason the approach is popular. When Mother Benedict preached our retreat here last year, she mentioned that at the beginning of her 20-year superiorate in the Netherlands, she forewent commenting the Rule of Saint Benedict for a bit, because the Sisters were so affected in a negative way by the idea of a Rule. Today, Father Innocent announced some changes to the liturgy: Steve to soloing at Vigils, Roger to soloing at Vespers.

Wednesday 30th. Brother Stephan has been searching for a replacement farm pick-up, used. A commercially made gingerbread house has shown up for us to eat; a Christmas confection of sorts; if gingerbread people once lived in that house, they’d fallen on hard times.

Thursday 31st. With the weather cold and bleak, the sky has been indiscriminately pretty. Instead of home-baked, we have been eating bread from town: Mr. Tomato, a successful roadside store / greenhouse / bakery / lunch counter / ice cream counter.