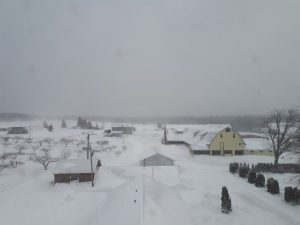 Monday 1st. Some funny looking cheeses appeared on a cheese board in the refectory for breakfast: a treat -we must be into a new year! In Chapter, we each greete

d all the other monks for the first time this year, and out came the calendars. The Abbot shows us the different calendars we’ve received, after which we choose the one(s) we wish. The Missions Étrangères calendar, this year like last, was done with great care, and is striking. Glic was unable to resist the Oratoire Saint Joseph calendar; very nice, everything seems well done at that shrine in Montreal. Brother Léo got a huge calendar showing the twelve months together, for the guest house office. Bede himself got ‘Nottinghamshire 2018’, with lovely shots including Sherwood Forest.

At lunch, we listened to Andrea Bocelli’s Christmas. I was regretting Father Clovis wasn’t there to hear it. (He is free to eat on either side: with the guests or with us.) Christmas tree must have been feeling proud to hear Bocelli feelingly intone in three languages: “O Christmas Tree! O Christmas Tree! Your branches green delight us!”

Tuesday 2nd. Edmundo has arrived from Ontario for a one month trial run of our life. He duly took a place in choir, between Brother Léo and Brother Glic.

Wednesday 3rd. Dom Bede has been commenting the Rule in Chapter with reference to the Season; Advent, Christmas.

Thursday 4th. A jolly Grand-Dad was by to the guesthouse with his constantly-smiling grandson at his side: five years old and equipped with toy handcuffs: ‘pour poigner les méchants’, which seemed to exclude us.

The eve of this propitious day, Brother Henry had dreams of extreme weather. Today, under ominous grey-white skies we set out for the sisters, where the welcome was wonderful. Two turkeys had been cooked, and a log was burning on the video fireplace. Dom Bede received the surprise of a combination birthday and anniversary of Abbacy cake, with dual candle sets.

We made our way back in separate waves, then the snow and wind picked up, eventually turning to rain then back to snow.

Friday 5th. To get out to the barn to milk in the night, Steve walked away from the barn, around a drift, then on. Considerable drifts bordered smooth ice and even rain puddles along our drive.

Saturday 6th. The John Adams biography is bringing to light the involvement of various European countries in American independence. I think it would be safe to say a lot us in NB were not taught much of this history; I bet it was mentioned in passing, in school.

Sunday 7th. In his homily for the Epiphany today, Dom Bede spoke of joy, adoration and generosity as being touchstones of Christian living. Extreme cold lingered on this week, but our little bull first-born of the year was not impressed by it. He is strong and pretty.

Monday 8th. Today was Dom Bede’s birthday, and we wished him a happy one. 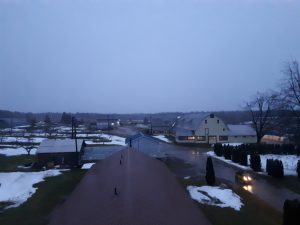 Tuesday 9th. A farm technician has been by to check how well the vacuum pipes for milking are functioning.

Brother Stephan has gone to the lakeside hermitage for a few days’ retreat. People have been asking: what does he eat while he is out there? I am not certain, but in years past, cans of fish, along with bread and cheese were staples for us there.

Wednesday 10th. Five years have nearly passed since we leased the Kia Optima; seems like yesterday. We’ve had many blessings during that time, and soon we’ll have something new. Previous to the Kia, we’d had a full-size car which the then-Abbot might not have bought if not that a monk had fallen in love with the car. Turned out to be the right car for us, so love’s not always blind.

Thursday 11th. Ordinary time is very welcome territory to Brother Léo when we return to it. Today, looking at the snow outside, Léo was telling me that for fun as children in Memramcook they would see who could run the furthest barefoot over the snow, afterwards dashing back to the house delighted. He says twenty feet barefoot is pretty good.

Friday 12th. There has been a bit more activity than usual this time of year in our guest house, with guests arriving from near and far, including someone preparing for Ordination as an Anglican Priest.

Saturday 13th. A variety of precipitation types yesterday and today left the pin oak coated with an ice that highlights the tree’s fine branch structure.

Sunday 14th. There were propane problems today, affecting especially the kitchen and the laundry. After supper, a technician found the problem: the drastic, repeated changes in the temperature outside have made condensation gather in the regulator; we await a new part and for now, he’s got the old one working.

Monday 15th.  After 15 years away, a retreatant has returned to spend a few days, and is quietly smiling. The propane issues from last week are being sorted out. Simone our cook was wondering, just where are all the pilot lights for the various propane feeds.

Although we have been alternating psalms English/French at Lauds / Vespers for a while, it can still be striking to hear some things—struggles, for instance—in English, not French. French Psalmody creates a world, one which seems to reach quite far, in its own way. English has a starkness which brings out the drama of the Psalms, in its own way.

Wednesday 17th. Brother Glic made his way to Saint John to see a specialist. En route, he saw three young deer grazing on the hill beside the highway. Later, there were wild fowl which looked like little pheasants, for some reason wanting to cross the highway while the world around was white.

Thursday 18th. A very light snow powder left a perfect palette for traces of the many farm cats’ paws; looked at that way, you’d have to say what they’re doing is beautiful.

Today we began the week of prayer for Christian Unity. Brother Léo has developed a great knack for welcoming members of other Christian denominations who come here for retreats: he has an easy manner, which may also account for his having made it to 91, today.

Friday 19th. Dom Bede and Brother Stephan gave some new vehicles a test whirl in Moncton today, in search of our next vehicle. Dom Bede is hoping to get a hybrid vehicle this time out.

Saturday 20th. Nelson Runger, who narrates the Adams audiobook at lunch, has the clearest voice yet. He reads with the exact zest which, in the different media flowing across the border, flooded the Canada many of us grew up in. It is the voice of a spirit which has not died, but is less in evidence to those listening and watching from afar.

Brother Léo continues to receive birthday wishes, and gifts. At times it’s as though he has won life’s race for these others.

Sunday 21st. The sunlight during Mass was a bit much depending on where you were sitting or standing, we won’t complain!

Monday 22nd. Simone has introduced us to—could it be?—yet another, Acadian dish. A dessert this time. Potato candy. Mmm.

Tuesday 23rd. Just before dawn, a beautiful grey sky; beautiful but iffy, weather-wise for Father Innocent who had to drive a retreatant in to the Moncton airport. The roads were slippery. This quieter time of year in NB evokes the memory of an even quieter NB, when basically, year-round resembled the dead of winter, there was so little stir.

A modified stool like the ones we use in refectory was taken in from where it had served as a step up to the propane tank outside the chapel. I put it back in the tool room. The Calvaire tool room is one of the mysterious, hidden corners of our life. It is directly behind the barber shop. It has some tools, paint, bottles of nails and screws, plumbing supplies, odds and ends. After different grassroots efforts aimed at an orderly and complete tool stock, monks have taken to simply keeping the tools they might need because, like many tool rooms, this one lost its ‘treasures’ one by one.

Wednesday 24th. In the dark this morning, Steve was bringing little loads of grit to put on the thick ice on the front drive. We have to assure road access to the milk pick-up truck, which arrives early in the day and could get stuck on our icy drive; has gotten stuck.

Thursday 25th. In Dieppe today, Brother Henry was saying how much he enjoyed recently meeting a young retreatant who was heading back to his home province.

Friday 26th.  Blue skies and the moon becoming fuller are nice signs that we will not be in January forever. At lunch, this feast of the Founders, Bede played the new CD of music by monks and nuns of the Region of the Isles.

We have heard that the Pope has been able to recognise the martyrdom of the Atlas monks killed in 1996. Strikingly, the then-Abbot General was here just a few months before they died, discussing at length with us their situation. The monks’ discernment that they should remain in the country, coupled with their complete integration with their Muslim neighbours, made it seem they would be able to stay in Algeria and live, until their lives senselessly ended. In the Order their story seemed to be a call, to those of us still alive, to quietly and really become monks.

Sunday 28th. As we discussed things at lunch with Brother Henry, I heard the reason squirrels were less numerous here is that the barn cats were eating them. Could this be?

Monday 29th. Commenting on the fifth step of humility in Chapter, Bede used an expression I had forgotten existed: to ‘fight shy’ of something. In this instance Bede said we all fight shy of, really acknowledging our sinfulness.

The sun was setting, the moon was rising this afternoon as a cat sat between them, in her little spot in front of the greenhouse. Hard to say if she was enjoying this or not; she was fully occupied being cool.

Tuesday, January 30th. Our aspirant prepared for take-off tomorrow, one month with the monks elapsed already; in a flash, he says.

Wednesday, January 31st. Brother Stephan installed a big, new mercury thermometer outside the milk house window. They don’t last, somehow. We tend to look at the outside temperature often, both in the barn and in the monastery.

Brother Glic has been valiantly tidying up the tool room and installing fresh LED lights for choir. The altar, the monks’ seats are better lit than guests’ places, thanks in particular to a series of flood lights hidden from guests’ view by the ceiling beams. I looked at the new LED bulb, which apparently will burn brightly for decades, and wondered how.