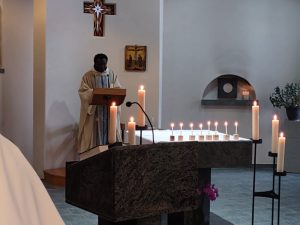 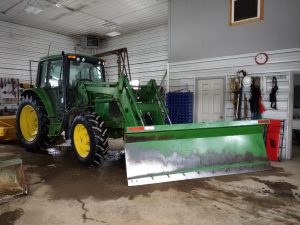 Tuesday 1st. The front door re-opened today for Mass-goers, with two of them joining us this 8 AM. Before long, Bede was selling a bit of honey again out front. In Chapter, Dom Innocent read us accounts of the gyrovagues of long ago: monks on the loose, so to speak.

Wednesday 2nd. One couple only showed up for Mass for the Presentation this morning, and they placed their candles on the altar with ours, for the offertory. Dom Innocent went to Moncton this afternoon, and came back with a brand new Keurig coffee machine. It is a supreme plus, so it must be good. We had a festive meal and talked about coffee choices, as well as the distant glories of Assisi, where Innocent will soon be to help elect a new Abbot General.

Thursday 3rd. In hopes of beating the snowstorm now forecast, Innocent got in to Moncton a day before his flight. During his absence, our prior Brother Stephan takes the helm.

Friday 4th. Dom Innocent was obliged to wait for another day, for better weather for flying.

Saturday 5th. This week faces not seen here in quite a while reappeared, though not many. While other parts of the world roll on as regards regime, or routine, our out-of-the way province is somewhat more slowly affected by change.

Sunday 6th. All sounds good for the progress of Dom Innocent’s long voyage. At lunch we listened to coronation anthems, at once quiet and colorful.

Monday 7th. Father Roger presided a Mass of the Holy Spirit, to mark the beginning of the General Chapter in Assisi: all the monasteries celebrated similarly. A special intention for the Chapter this year is the choice, by election, of a new Abbot General.

Tuesday 8th. The pigeons were a-flutter today, at the approach of another snowfall, this time a wetter snow.

Wednesday 9th. Before dawn, a light came on in the shop garage, as Brother Stephan once again brought out the John Deere, to plow. Brother Leo says he would love to get behind the wheel of the big tractor. A burst of sun early this morning had the starlings singing, to the degree starlings can.

Thursday 10th. The new French translation of the Roman Missal stands up well alongside the corresponding English translation, which was finished ten years quicker. Since we use the English Missal only one day a week, it is hard to get a full idea of celebrating with it. 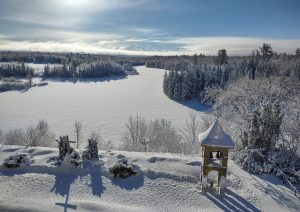 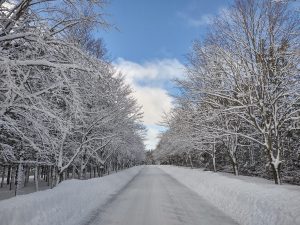 Friday 11th. Robins showed up outside and bounced around some. Brother Stephan cleared snow away from behind the guesthouse today, to facilitate drainage when it melts. A new Abbot General was chosen today. He is Dom Bernardus Peeters, originally from the Netherlands. I asked Father Bede if there had been others in that role who were Dutch, before Dom Bernardus, Bede was not sure.

Saturday 12th. Our latest refectory audiobook is American Buffalo: In Search of a Lost Icon.

Sunday 13th. We simplified singing, a bit, for Sunday Mass, as we head into the last week of Dom Innocent’s participation in things in Assisi.

Monday 14th. With a little watering from Father Roger, an orchid from Christmas is still brightening up the Chapel. Monday morning involves some cleaning, by Roger, as Bede for his part gets the laundry underway.

Tuesday 15th. The village of Rogersville has published an elegant booklet, presenting its cultural policy, as part of a local plan to integrate art and other cultural aspects into life, and growth. The monastery is presented as being part of the genesis of Rogersville; a current contemplative reality; and a draw for visitors.

Wednesday 16th. Father Roger welcomed someone from the farming world. There is not much news published from the General Chapter in Assisi: they’re busy. On the Order’s website, photos show us faces from the Order, of those taking part, and on those faces good humor, humility, solidarity.

Thursday 17th. There is now someone scheduled for a retreat, in Father Bede’s book, after weeks of blank pages. 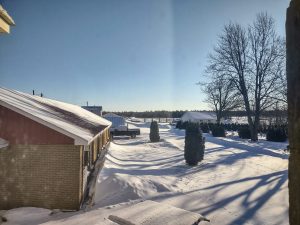 Friday 18th. In a sunny Italy, Dom Innocent began his journey home to us. Here, rain and mild temperatures led to quite a snow melt. As water began to run outside, particularly along the road, it was necessary to clear away snow in order to ensure the water had a place to go. Our unusual stairwell leak returned, on the east stairwell, with some water making it right down to the basement.

Saturday 19th. At Mass, a Miramichier ably provided music for Communion: voice, guitar, and harmonica. Our Refectory reading, American Buffalo: In Search of a Lost Icon, is introducing us to a new wave of nature writers, able to deliver science with a human touch, for today.

Monday 21st. Dom Innocent got back yesterday evening, on the train from Moncton, bringing our numbers back up to six. His return travels were marked by delays similar to those heading out, but happily the schedule he chose remained pretty much on target.

Tuesday 22nd. A lovely fox crossed the white lake today, trying to be furtive, but in the wrong setting. Brother Leo received a belated birthday card.

Wednesday 23rd. Dom Innocent showed us photos from the General Chapter, as he explained how the Chapter went, and answered questions. In terms of how the Assisi health precautions played out, this international meeting of about 130 superiors, plus additional personnel, was quite a success. As the series of photos progressed, we saw several friends who graced these shores in years gone by.

Thursday 24th. Our refectory audiobook is guiding us nimbly through North America’s prehistory. The author/narrator’s Michigan accent is not unpleasant. 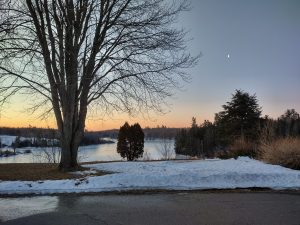 Friday 25th. Little by little, our small weekday Mass numbers bump up a bit, which is similar to the pattern in the Parish, Sundays. The warmer, rainy days which have hit us, have revealed leaves from last fall on the lawn, next to patches of snow.

Saturday 26th. Blue Jays appeared near the lake today, their energetic presence hard to miss. At Mass, Brother Stephan played A Whiter Shade of Pale as communion music. This week was marked by the death of the song’s composer, Gary Brooker.

Sunday 27th. This week, our little statue of Saint Brother André of Montréal got repaired. Our icon of the Founders of Citeaux was also restored recently, a little ceramic crest had fallen off. The crest is made of material from the Church of Cîteaux.

Monday 28th. The community received as a gift, a jumbo-sized Pope Francis book. Francis’ photo is on the scriptorium wall, but there is an empty space awaiting a photo of our new Abbot General, Bernardus. A new community schedule was posted. It includes a regional meeting for the Canadian monasteries here, in June. The last time such an annual meeting could be held in Canada was three years ago. Calvaire was set to take its turn hosting, when such activities were put on pause.