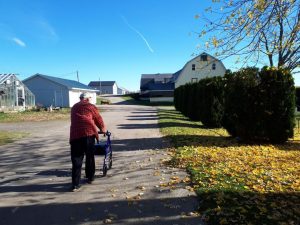 Monday 1st. We each received little memorial cards with Brother Henry’s photo, and the write-up from the Order’s website. The photo was taken as part of promotions for our centenary, in 2002.

Tuesday 2nd. In Chapter this morning of the Presentation, Dom Innocent read extracts from Pope Francis’ thoughts on the religious life. Francis takes after Cassian in terms of the theme: finish your engagement in the same spirit with which you began. Next, Innocent ran through the form which Mass would take this year: only the Presiding Priest proceeding to his place; everything to take place within the Chapel. As always, a heartening celebration. At Compline, when the lights inside went out and the external floodlight was switched on for the Salve Regina, snow and ice falling outside had coated and partially blocked the window behind the Blessed Virgin Mary.

Wednesday 3rd. Brother Stephan cleared the roads after the snowfall yesterday, which was followed by unusually mild conditions.

Thursday 4th. A path for water from melted snow has been plowed leading from the guesthouse wall, the source at times of a bit of flooding. These days, the problem seems to be that the guesthouse chapel wall has been affected by years of humidity.

Friday 5th. Bede got a new pair of glasses.

Saturday 6th. Just a touch of snow, and after Mass, A blue Jay appeared, perched on top of the Pieta by the lake, he seemed a little disoriented, maybe wondering where the feed had gone. Brother Leo finds that the food here is good, and has taken to exclaiming, concerning his meals: “It was fit for a king!”

Monday 8th. Dom Innocent has put out a written travelogue from the Abbot General’s secretary. Dom Eamon and his secretary Simeon managed to visit more than a dozen monasteries in France in October 2020, travelling by car from Rome. The print-out is right under our framed photo of a smiling Eamon.

Tuesday 9th. Edmundo, who arrived in December for his second try at life as a monk here, set out today to explore new paths. In prayer with him, we wish him all the best.

Wednesday 10th. We met today to discuss a few elements of our life, and their organisation. Looking at life this way, it struck me how much we have to be thankful for.

Thursday 11th. The row of exterior lights along the south side of the new barn have gone dark, and night looks perhaps better this way. Lights are bright still, around the silos. The first poultry production cycle is nearing its end, as those involved discover the workings of the new barn system and overcome farming challenges similar to those of the past.

Friday 12th. Though the refectory reading, a day-by-day story of a teenager’s life at Auschwitz, is not an easy listen, it does strengthen one’s thirst for the light. Today, a technician we’ve come to know and appreciate helped launch the monastery’s remote technology system for the new barn.

Saturday 13th. Daily Mass is now open again to the same limited number, while honey or rooms will have to wait a bit still.

Monday 15th. We received a nice, quarterly color magazine from another Canadian monastery, with all their news, and some of their views. There being less direct contact between us these days,  this takes on new importance. 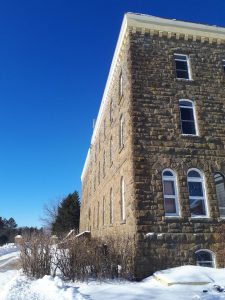 Tuesday 16th. In Chapter, Dom Innocent reviewed some points pertaining to carrying out the liturgy. He mentioned that the Canadian Superiors would soon meet using their computers, each in their own monastery. This being mardi gras, he also read Benedict’s Chapter on Lent, and gave some indications for this year.

Wednesday 17th.  Lent began smoothly and strikingly enough. Compared to the sound of other special seasons, the antiphons for the main Offices of Lent are a bit more austere, but maintain a sense of joy. A few people joined us for Mass, and to receive ashes today. For lunch we had bread and water, with soup for those with health issues.

Thursday 18th. The chickens shipped, and a two floor rather than three floor barn made for an easier time. As well, for the first time we could not hear the late-night workers. Lenten reading kicked off after Lauds. A few members of the community were there, which in our case means, a lot of the community.

Friday 19th.  Bede’s Lenten reading is Penguin’s ‘The Age of Bede’, his namesake, which looks like a great book. Along with lives of Saints, and maps, it includes the Voyage of Saint Brendan: “a whimsical mixture of fact and fantasy that describes a quest for paradise on earth”.

Saturday 20th. All was quiet outside this morning, except for the sound of crows in the distance. On the smooth lake surface, a few skidoo tracks traced a path south, a peaceful sight. The spot where they access the lake is the field where Father Edmond Richard’s big strawberry patch used to be.

Sunday 21st. Once again, a sunny day greeting us, as well as the few who were enjoying the outdoors down by our grotto. Inside, Dom Innocent posted a note asking us to reflect on an upcoming liturgy disccussion. 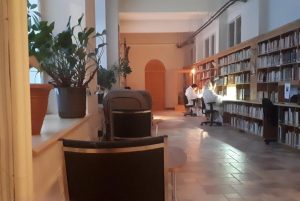 Monday 22nd. One of our newspapers, delivered in its plastic bag at the road, got lost in the snow this week.

Tuesday 23rd. Our liturgy meeting went well. Such is our liturgy’s set-up, centrality, and constancy, that there is no other topic quite like it. Organising on a few matters brings us up to date, and hopefully keeps us fresh. Physical organisation had center stage for today’s discussion. Dom Innocent then asked us to reflect on the composition of the Abbot’s Council, and see if a bit of a reboot there might not be in order; it has been three years since the last listing. In our Order, all superiors have councils to help them,  and as an avenue of consultation to validate various decisions, depending on the seriousness of the matter.

Wednesday 24th. Brother Leo has been reading Louis Bouyer’s Life of Newman, and says it is the best book he has ever read.

Thursday 25th. Brother Stephan says you can judge the winter by the level of snow left in our little cemetery, after all the  drifting’s done. At present, snow is up to the horizontal crossbeams. Not a harsh winter in this regard, so far.

Friday 26th. The sun rising earlier, lets us see the row of trees to the north more clearly after Lauds, and it becomes more evident how the trees behind the front row have been harvested.

Saturday 27th. Max Eisen’s holocaust account ends in Canada, where Max now lives, and is narrated by a Canadian, Douglas E. Hughes; we are not used to hearing that sort of delivery at lunch. Young Max, despite inhuman treatment, became who he was: a regular guy, a good guy, and evidently a strong person.

Sunday 28th. The Province has begun breathing slightly more easily regarding health matters, as we continue operating along the same lines, but with some hope as regards the future for our guesthouse. 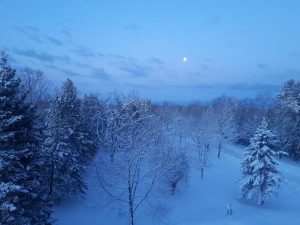