Saturday 1st. Another community offered us their 1947 edition Cistercian Antiphonaries, the big books once used in choir.

Sunday 2nd. Today’s Feast of the Presentation is one of the quietest Feasts of the year, but with the biggest feel: I was surprised this morning, upon counting, that there were only 18 participants’ candles on the altar, monks included.

Monday 3rd. The usually dormant chair lift is being used at the front door, by a guest who admires it, but says the lift has a mind of its own.

Tuesday 4th. At Chapter meeting, the visitation card from last year was read. Hard to believe, that regular visitation was only six months back. Soon, we will have to compose a house report to send to the General Chapter, and the visitation card offers a point of reference for this, through its evaluation and recommendations. By the time we left the Chapter room, big trucks across the road, which had been loading the last of our wood in the night, were gone.

Wednesday 5th. It is maybe the quietest time of the year; partly, a time for planning. As such, Dom Clément’s visit next week seems perfectly timed. Different Medical rendez-vous had monks making their way to the Miramichi this afternoon, while Brother Stephan looked into repairing a damaged windshield. I drove the customised farm truck there. In the sunlight, it drew attention of different sorts, dazzling some folks, bemusing others.

Thursday 6th. Brother Leo says he prays a father and son who were once monks here together, every day. They’d seemed to people then quite different from one another: the father, venerated; the son, colorful but he says that, as well, they really loved one other, they got along perfectly.

Friday 7th.  Author Richard Rohr must be quite a good retreat master. His book, which accompanies noon meals, has its ebbs and flows but maybe that it inevitable for a book intending to spark a Trinitarian cultural renewal. It uses, as a sort of spice, idioms we are not used to, maybe because of the snooziness of Canada. What do you think? 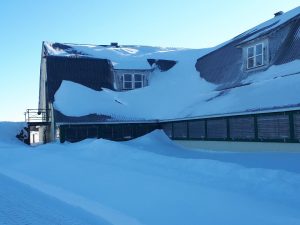 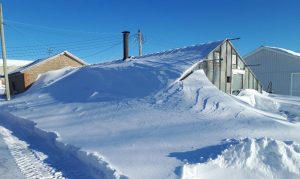 Saturday 8th. The countryside seemed to breathe easy after a snowstorm that, yesterday, seemed set to blow into today. The sudden sunshine seems to say “Do you know where you are? Do you know how good you have it?”

Sunday 9th. For Mass Offertory, Brother Stephan a Pastorale by Charles Wesley. This is a piece he has turned to many times, off and on, however the music of the piece always has something more to say. For Communion, he drew on the midi technology for some creative sound work.

Monday 10th. The extra-bright light bulb, which normally beams straight down on the altar has reached light’s end. Father Bede found a replacement, closer by than was the case last time (China). The tractor normally used for blowing snow is down, so today Steve had to use the little one, which has no cab on it. Dom Clément arrived from Mistassini for his winter visit. Next month will mark ten years as our Father Immediate for him.

Tuesday 11th.  In Chapter, Dom Clément spoke to us of Mistassini’s chocolate industry, and his international engagements with monasteries, among other subjects. His visit here these days is not an official one, and is partly in order to be ready to share regarding Calvaire at this year’s General Chapter and hence, get to know us. It feels more like our place, our home, having him by. 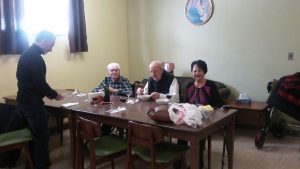 Wednesday 12th. Brother Leo’s last surviving brother, and family, were able to visit him today. The two having passed through health challenges in 2019 which kept them apart, today was an important, and festive moment. This evening we had a festive meal among the monks, before soon saying goodbye to Clément.

Thursday 13th. Tongues of snow hung from the repair shop roof, and puffs of snow were released from heavily-laden trees, now and then. The shrimp pizza we had yesterday was even tastier, served a second time. Innocent and Clément got away after Mass for Quebec, where Innocent will make his regular stop to say hello to the community of Mistassini.

Friday 14th. A new cleaning lady, who is a returning cleaning lady was brightening our guesthouse hallways. Brother Leo has taken to rising a bit earlier, in order to attend the Office of Lauds once again.

Saturday 15th. Father Roger prepared us a nice egg omelette accompanied by French Fries for supper. Brother Leo’s Mass-going Miramichi friends offered him a framed photo of him with them, and one of his cakes, his recent  93rd birthday.

Sunday 16th. After None, Brother Glic set up for Eucharistic Adoration and Benediction after Vespers. Father Bede saw to e-mail retreat bookings; one first-time booking had to be cancelled this week because the Canadian railways were shut down, due to protests. 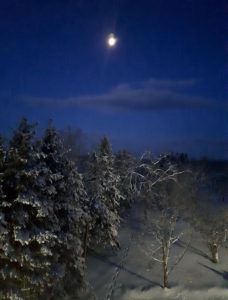 Monday 17th. To adjust to our smaller numbers, Masses until next Sunday will be recited. Dom Innocent wrote us a nice note, recounting his travels and experience so far. In winter, depending on conditions, there is the question of how best to get into the Province of Québec from here in the woods : which road to take, how much time one is willing to take.

Tuesday 18th. Guestmaster Bede is keeping a close eye on the Via Rail passenger train situation, which so far has not normalised. It was wickedly cold out this morning, and the smoke from the truck’s dual, stack-pipe exhaust was quite visible. On the lake, tiny birds were drawn to the smooth, snowy surface, for some reason.

Wednesday 19th. Happily, the temperatures rose a bit in concert with the arrival of snow, and Steve having to plow. Our refectory reading is aimed at a broad range of souls, and the author, Father Richard Rohr, is ready to admonish and advise cheerfully as regards spirituality, at times reminiscent of some tough but tender coach figure from 1980’s cinema. His skillful reaching out is also a reminder of the goodness and openness which exist in hearts in the city.

Thursday 20th. Brother Stephan brought the Honda to the Miramichi today, to have the windshield replaced. But they had the wrong windshield, so another try will be necessary.

Friday 21st. Brother Leo gets a lot of reading in, and has now begun on one of Joseph Ratzinger’s early books. L 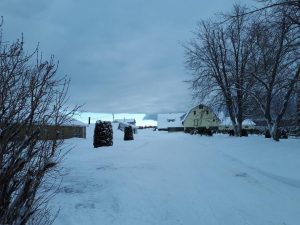 eo admires Ratzinger’s knowledge, but finds the book a fraction beyond the scope of the non-specialised reader. Normally, Leo finishes anything he begins reading, no matter how tough the slog.

Saturday 22nd. With ice and snow so widespread, one of the monks had traction trouble, walking, unfortunately. This led to monks and entourage describing various past close scrapes, and worse.

Sunday 23rd. Warmer sunshine, plus the sun climbing, add a faint brush of hues beyond white and grey outside, and today there was even partial snow melt.

Monday 24th. With Lent soon approaching, Brother Stephan posted a note explaining that some specifications on how we’ll live Lent this year await Dom Innocent’s return. The Miramichi today offered car windshield replacement, and some quiet wait time; hanging around time might be a more appropriate term. The bond between people there is strong and, often, silent.

Tuesday 25th. The soft hum of the long grain truck could be heard today, as it filled up the chicken barn siloes. Grandparents brought a very well-behaved and happy young soul to Mass this morning.  Lucien did some finishing work in the exercise room, a space created by breaking down a wall. Mardi Gras lunch consisted of some mod fish cakes, rapée, carrot cake, ice cream.

Wednesday 26th. The chicken barn requires a back-up heating furnace, and this system is now being serviced. Ash Wednesday went well. The unique nature of the day gives an impressionistic portrait of sorts, of life itself, and life here, as well as of each individual’s journey.

Thursday 27th. Our Lenten hymns for Lauds and Vespers reach out for ways of expressing the Mystery of the Cross. Sometimes they’re evocative, simply; sometimes doleful, more often exultant. 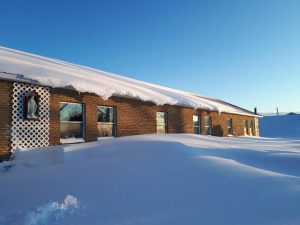 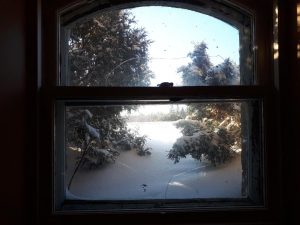 Friday 28th. The cessation of passenger rail east seems to be going to end, the eve of Dom Innocent’s return to us from one Province west.

Saturday 29th. One of the monks was cleaning his room this morning. In general, the fellows run a pretty tight ship, as regards their own harbour. The grand eccentrics of monastic housekeeping which former times knew . . . where are such figures to be found today?