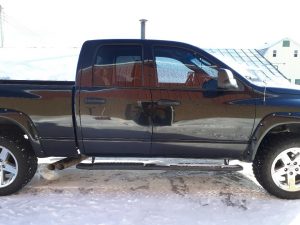 Friday 1st. Brother Stephan found a pick-up, thanks to a used car place run from someone’s home, a few houses down the road.

Saturday 2nd. The feast of the Presentation. At the Offertory, everyone left their little candle on the front of the altar, one by one. It is perhaps unfortunate the reality so signified is made visible at prayer so rarely; maybe it’s better that way. Our Sisters arrived for the Office of Sext, taking seats just behind the south stalls. We went downstairs for lunch, prepared by Father Roger. It was really good, perhaps all the cold weather also explains why we dug into it with such gusto. Conversation topics included our pasts and futures; conversion experiences; current-day relations between the surviving Beatles, Paul and Ringo.

Sunday 3rd. John was looking around the building for a star-shaped, custom made wrench which is needed but has disappeared. Minus twenty again last night. Brother Leo told me this morning he remembers it being minus 42 here one winter. He was working at the pig farm, the pipes froze, many people in the area had trouble they’d never had before.

Monday, February 4th. Father Innocent added a second tack board to the one on the first floor west. In refectory, we have started listening to a new book from Tyndale House ‘Captive in Iran’, a first-hand account of going to prison in one’s own country, in this case, Iran, because you believe in Christ. The authors’ path to Christ is recounted briefly and beautifully.

Tuesday, February 5th. This morning someone was walking across the lake with their dog. The dog seemed reticent to go far from its master, as though this was too good to be true, the whole lake to themselves, plus the woods.

Wednesday, February 6th. A notice has been posted on the guesthouse door: Mass times changed. Sunday Mass will be the same time as weekdays, 8:00 effective February 17th.  Someone left the page open in the Acadie Nouvelle paper to a comic-serious columnist people pay attention to. He manages to be a sort of voice of conscience, by avoiding being one.

Thursday, February 7th. An official Anglican team meeting was held here. The Anglicans who meet to discuss their work, are happy people. Former cooks, mother and daughter, stopped in today from taking a walk on the circuit along the front of the monastery, to say hello. The improbable plumbing problems resulting in sporadic water on the basement floor are being sorted out floor by floor by Lucien and Brother Glic.

Friday, February 8th. Brother Leo had to be taken to the Miramichi Hospital to sort out some health issues, entertaining folks all the while by his repartee.

Saturday, February 9th. Father Innocent got into the Miramichi earlier this week for training on how to rework the website, and very quickly our site got its new look. We were certainly one of the more ‘retro’ websites around, which some said they liked.

Sunday, February 10th. The news on Brother Leo is reassuring overall, and he will remain at the hospital a few more days.

Monday 11th. The slight change in twilight twice a day makes it feel and look like we are back on the beginning side of winter; I miss Advent and Christmas. In hospital, Brother Leo is reading a new book, and with his little red psalter is able to pray the Psalms of the Offices as he would here. For us, at Vigils, his voice is not present…nor his reassuring shuffle.

Tuesday 12th. Father Innocent asked for our suggestions on different dossiers this morning, and suggested the Priests offer today’s Mass for the various health needs of the community. Today, besides Henry and Leo in care in different locales, appointments, procedures, drivers for these would leave just two monks here for most of the day. This last decade, the community has had notable health challenges. What is most remarkable perhaps is how well many of those challenges went, considering.

Wednesday 13th. I talked to Brother Leo at the hospital. He is looking good. I talked to other people too; they often wish to share their thoughts on Brother Leo, which often leads them to speak of their own lives, or life in general. The nurses are mainly young, and seem to have a slightly different culture and demeanor than did their predecessors in the Miramichi twenty years back. Nice spirit and care.

Thursday 14th. A lady forgot her pillow here, it is in a bag with a little giraffe friend. With Leo away, Bede often enough is manning the front desk, doing a bit of translation work when things are quiet there.

Friday 15th. There is a bit of anticipation of Sunday’s timetable change, kind of a rare event for us. Leo was not released today, and it looks like it may happen next week.

Saturday 16th. Many showed up for English Mass, and from them we got news on former monk brothers of ours. An Anglican group was by, to use the facilities for part of the day.

Sunday 17th. For the first, earlier Sunday Mass, a nice little group showed up; more than might have been expected. One Mass goer in particular walked in and nodded hello; he has a dynamite smile. Thanks to the scheduling change, for the first time in several months all the Priests were present for Sunday Mass. At lunch, Brother Stephan’s music choice had us stumped: who was it singing? Turns out it was Gillian Welch, with a beautifully written and performed song whose somber feel would have rivaled Johnny Cash at his atmospheric peak.

Monday 18th. The phone system was malfunctioning, leaving series of messages that aren’t spoken messages…and with no caller as their source. Steve suspected spectral activity. But the Scooby Doo team have not been called in yet. Tonight, the near-full moon, setting brightly over trees and snow, looked almost like a new day dawning somewhere new.

Tuesday 19th. In Chapter, Father Innocent spoke about continual prayer in the context of different spiritualties. In the Miramichi, Brother Leo was released from hospital today. The nurses were happy he could now go free, some of them looked different from before, slightly aglow. While we were waiting for the doctor’s last word of okay, I spoke to another older fellow across the hall, who will not be going home. We talked especially about music, what it means to have that in your life. I said “when you have music in your life”, and before I could finish the phrase, he said “you have everything.” 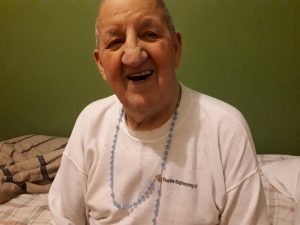 Brother Leo back from hospital

Wednesday 20th.  Brother Leo is resting easy in a new room on our side, rather than near his post in the guesthouse, and taking the occasional stroll in the corridor. Two Priests have been on retreat, of two different generations, the older having baptised the younger at his life’s outset. As people start thinking of Lent, and different groups or even families book their stays, some Knights of Columbus from the north of the Province have made arrangements.

Thursday 21st. An old plastic chair for outdoors gave way recently and let someone down as they were waiting for their drive, just inside the doorway. Our phone system has been retuned, and secured.

Friday 22nd. Across the road, the Sisters have an actual cloister, unlike us: a little quadrangle, open to the sky. This time of year especially, then, on past the arrival of spring, it gives the light more a chance to play.

Saturday 23rd. A steady visitor was talking to me today about Ralph Martin’s book, The Fulfillment of All Desire; had I read it? I said, no, as I have more than once before; but it is good to know how much this book means to Christians, today.

Sunday 24th. There is a gentle charm to having Sunday Mass at a time off the beaten track, with a few village stalwarts there to accompany us.

Monday 25th. Our wheelie bin for recycling suffered a k.o. Seems maybe a snow plow hit is as it was standing bravely at roadside, offering its recycling to the those who care for this.

Tuesday 26th. Brother Léo said of yesterday’s Mass, “those were two good readings; such good readings.” Ben Sirach. Mark. With some help from Fathers Bede and Innocent, Leo has retrieved his tiny copies of the three litanies he prays daily, Sacred Heart, Saint Joseph, Divine Mercy. In Chapter this morning, Father Innocent made some precisions as regards how we organise and celebrate community Mass.

Wednesday 27th.  Someone close to the community told me he’s had it with winter. But winter, seems little impressed, minus twenty nights continue. Surrounded by trees as we are here, it seems as though mother nature has taken a long breath, and is waiting out the gradual growth of light peacefully.

Thursday 28th. Father Bede has devised a new form to fill out to let the cooks know on an ongoing basis how many guests will be present for noon and evening meals.